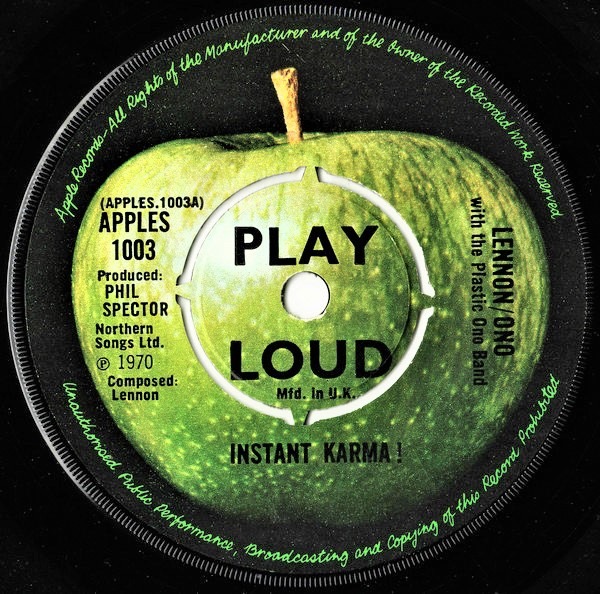 John Lennon married Yoko Ono in March 1969. They held two Bed-Ins for peace in Amsterdam and Montreal in May. ‘Give Peace a Chance’ was the Plastic Ono Band’s first single recorded in June at the Montreal Bed-In and released in July 1969.  John Lennon told Paul McCartney that he was leaving the Beatles on September 20. He released the second POB single, ‘Cold Turkey’ in October. John and Yoko proclaimed 1970 “Year 1 A.P. (After Peace)”.

John wrote, recorded and released the third POB single ‘Instant Karma! (We All Shine On)’ within ten days. ‘Instant Karma’ was written at his home in Ascot in the morning and recorded at Abbey Road studios in just one hour in the afternoon of January 27, 1970 – before McCartney announced his departure from the Beatles in April. John gathered his pals to record the song that evening. The single hit the shops on February 6 in the UK and on the 20th in the USA.  John jokingly said, “I wrote it for breakfast, recorded it for lunch and we’re putting it out for dinner.”

Back in September 13, 1969 John and Yoko had debuted the Plastic Ono Band, playing live at the Toronto Rock and Roll Revival with many of their friends including Eric Clapton. Retaining some of the POB members from that night, ‘Instant Karma!’ was recorded. The particular Plastic Ono Band configuration for ‘Instant Karma!’ included George Harrison on guitar, Klaus Voormann on bass and Alan White on drums. White’s amazing playing was featured prominently in the mix. His unique fills punctuated the song with excitement. Billy Preston played organ. Some people were fetched from a nightclub to provide backing vocals. As stated in the ad, the song was ‘Ritten, Recorded, Remixed 27th Jan. 1970′.

“John phoned me up one morning in January and said, ‘I’ve written this tune and I’m going to record it tonight and have it pressed up and out tomorrow – that’s the whole point: Instant Karma, you know.’ So I was in. I said, ‘OK, I’ll see you in town.’ I was in town with Phil Spector and I said to Phil, ‘Why don’t you come to the session?’ There were just four people: John played piano, I played acoustic guitar, there was Klaus Voormann on bass, and Alan White on drums. We recorded the song and brought it out that week, mixed – instantly – by Phil Spector.” – George Harrison

The true story of the extraordinary woman whom John Lennon loved.

Read the reviews and more.

The song’s premise came from a New Year’s holiday conversation with Yoko’s ex-husband and his girlfriend in Denmark. They contemplated the Buddhist theory of karma and pondered whether fate comes upon us in life or after death. John translated these thoughts into a warning that our consequences could be instant if we do not live in in righteousness and peace. He felt that what we do right now immediately affects us, and the world.

The chord structure derives from the beginning of the Beatles’ ‘All You Need Is Love’, first descending then ascending. (It is later echoed on ‘My Mummy’s Dead’ – the final track on John’s solo album, John Lennon Plastic Ono Band). Phil Spector then built his wall of sound around the song. He was soon brought in to produce the Beatles’ Let It Be album, causing even more tension between Lennon & McCartney.

‘Instant Karma!’ was rush-released (“like instant coffee”). The song immediately hit No. 5 in the UK (in competition with the Beatles ‘Let It Be’ single). Upon its USA issue on February 20, it reached No. 3. It made the top ten internationally, rising to No. 2 in Canada.

When author Stephen King was asked about the origin of his 1977 book title The Shining (the film was released in 1980) he explained that chorus of ‘Instant Karma’ (“We all shine on…”) conveyed the imagery of psychic power.

The B-side is Yoko’s song, ‘Who Has Seen the Wind?’ recorded on January 30th at Trident studios. The lyrics to Yoko’s delicate song incorporate lines from poet Christina Rossetti’s nursery rhyme, “Who Has Seen the Wind?” (from Sing-Song: A Nursery Rhyme Book, 1872).  The words convey the spirituality of nature, being able to see something that is invisible through the effect it has on other things (not unlike karma) through movement or in stillness. This gentle tune with a simple baroque acoustic arrangement accented with a serene tambourine is sung by Yoko acapella in a high-pitched, quiet and childlike voice. The first verse is in minor, then the song switches to a sweet major key.

Who has seen the wind?

Neither you nor I

But when the trees bow down their heads

The wind is passing by

John sang a live vocal over the instrumental track of ‘Instant Karma!’ on Top of the Pops during two different appearances filmed on February 11th. They aired on February 12th and on February 19th 1970 (with an echo on his vocals on the 19th). He and Yoko sported crew-cut hairstyles and wore ‘People For Peace’ armbands.  In one version, Yoko was blindfolded by a sanitary pad, knitting. On the other, she held up signs with the single words ‘Peace’, ‘Love’ ‘Hope’ and ‘Breathe’. They were accompanied by White, Voorman, BP Fallon and Beatles’ assistant Mal Evans is on tambourine.

I was blindfolding myself with a Kotex and knitting something that was going nowhere. I was doing that while a man symbolizing our future was singing ‘WE ALL SHINE ON’.” Yes. We will shine, but for that we have to take the blindfold off and stop knitting what we don’t know what we are knitting. It was my way of showing what we women must free ourselves. – Yoko Ono, Twitter Q&A 2016

My performance was showing to the world what women go through. Chained to the world, blindfolded, and still working hard, knitting. 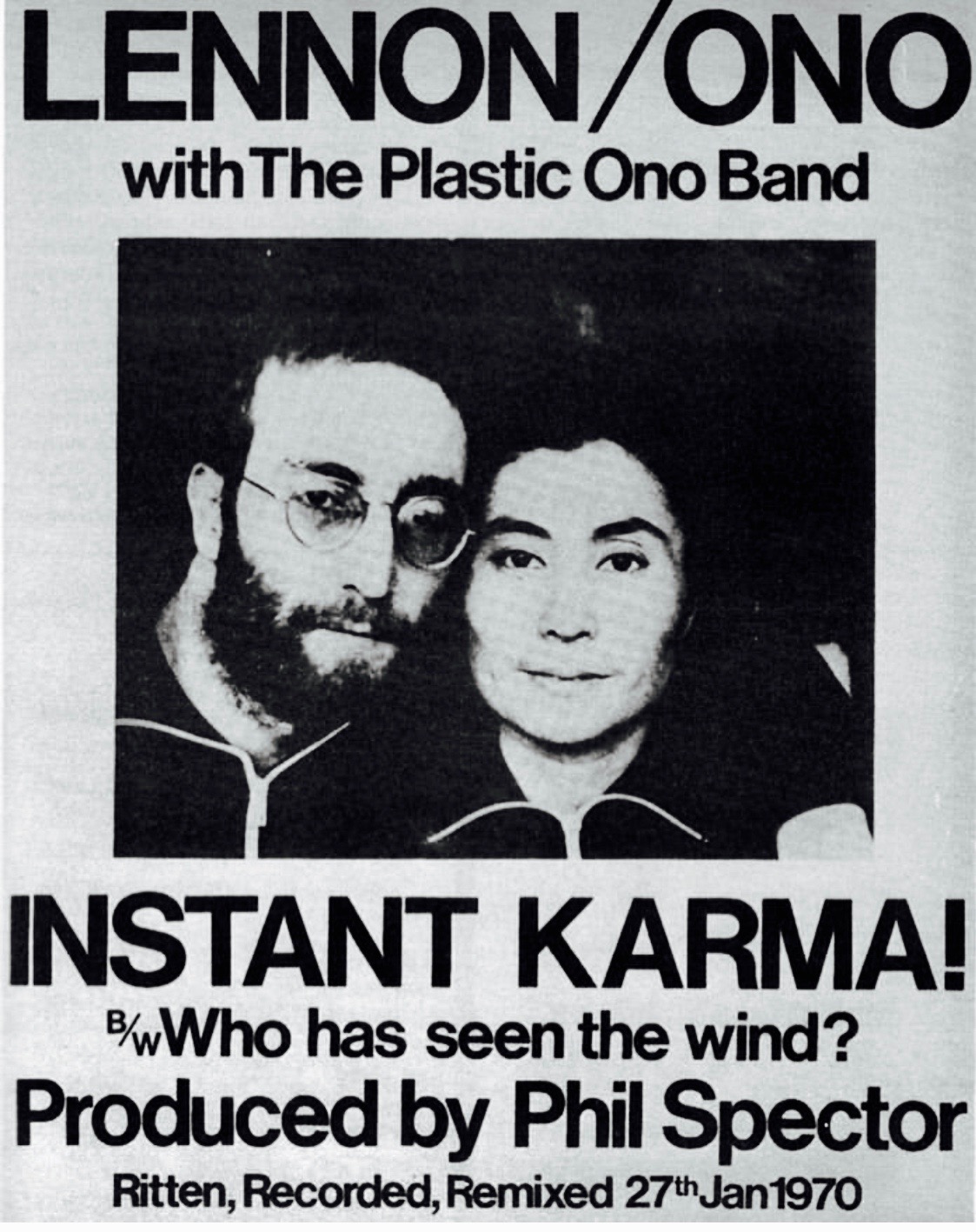 In April, John and Yoko would undergo Primal Therapy with Arthur Janov. It is amazing that his primal screams on ‘Cold Turkey’ came prior to meeting Janov.

“John was a little intimidated about that – how I would react to his voice. When we went into the studio to do “Instant Karma,” John was afraid to sing. Then he came in [the control room], and I put the tape back on, and he said, “It’s just like Sun Records.” When I heard John say that, it relaxed me. He knew from that point on that I knew how to record his voice. That was very important.”

Top of the Pops (knitting)
https://www.youtube.com/watch?v=xLy2SaSQAtA

Top of the Pops (cards)

A very cool story about the 2nd bass player on instant karma on top of the pops… BP Fallon… Read more here:
https://pleasekillme.com/bp-fallon/

BP Fallon: Ah, ‘Instant Karma’ with our friend John Lennon and his fab combo The Plastic Ono Band… John went on the radio and said “BP Fallon playing bass is concept art”. We were in the dressing room at the BBC and the call came for John Lennon and the band to go into the studio to do their bit. There was John and Yoko and Klaus Voorman the bass player and Alan White the drummer and The Beatles’ tour manager Mal Evans – lovely man – and Richard DiLello, the officially-titled ‘House Hippie’ from Apple, Richard was taking pix. And John kinda leans over me where I’m sitting and he says, “Are you getting up?” like, y’know, some drunk guy in Liverpool asking a biddy to dance. “Are you getting up? The Plastic Ono Band is everyone” John is saying. So you grab a tambourine and bang it enthusiastically in his left ear as he’s singing the live vocal to the ‘Instant Karma’ track. Then you get to thinking that it was probably a nightmare for John Lennon to be singing with this lunatic banging away in his ear, fueled more by the joy of life than by any specific rhythmic meter. So the next time we film the song, I borrow a bass guitar. “Well we all shine on” indeed. Can I play bass guitar? No. It’s just another slice of benign madness from the rock ‘n’ roll motherlode.

madelinex.com is a non-profit blog created for

It is also for anyone who is a fan of John Lennon (or the Beatles) who would like to know more about the extraordinary woman whom he loved.

Includes the love story of John & Yoko, and all the work they did together. 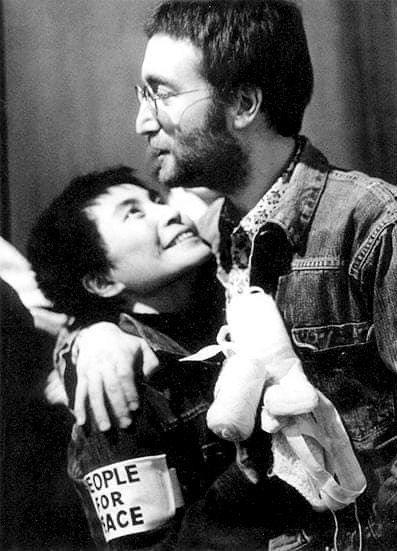 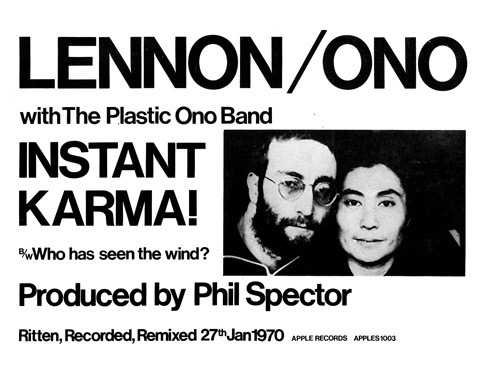 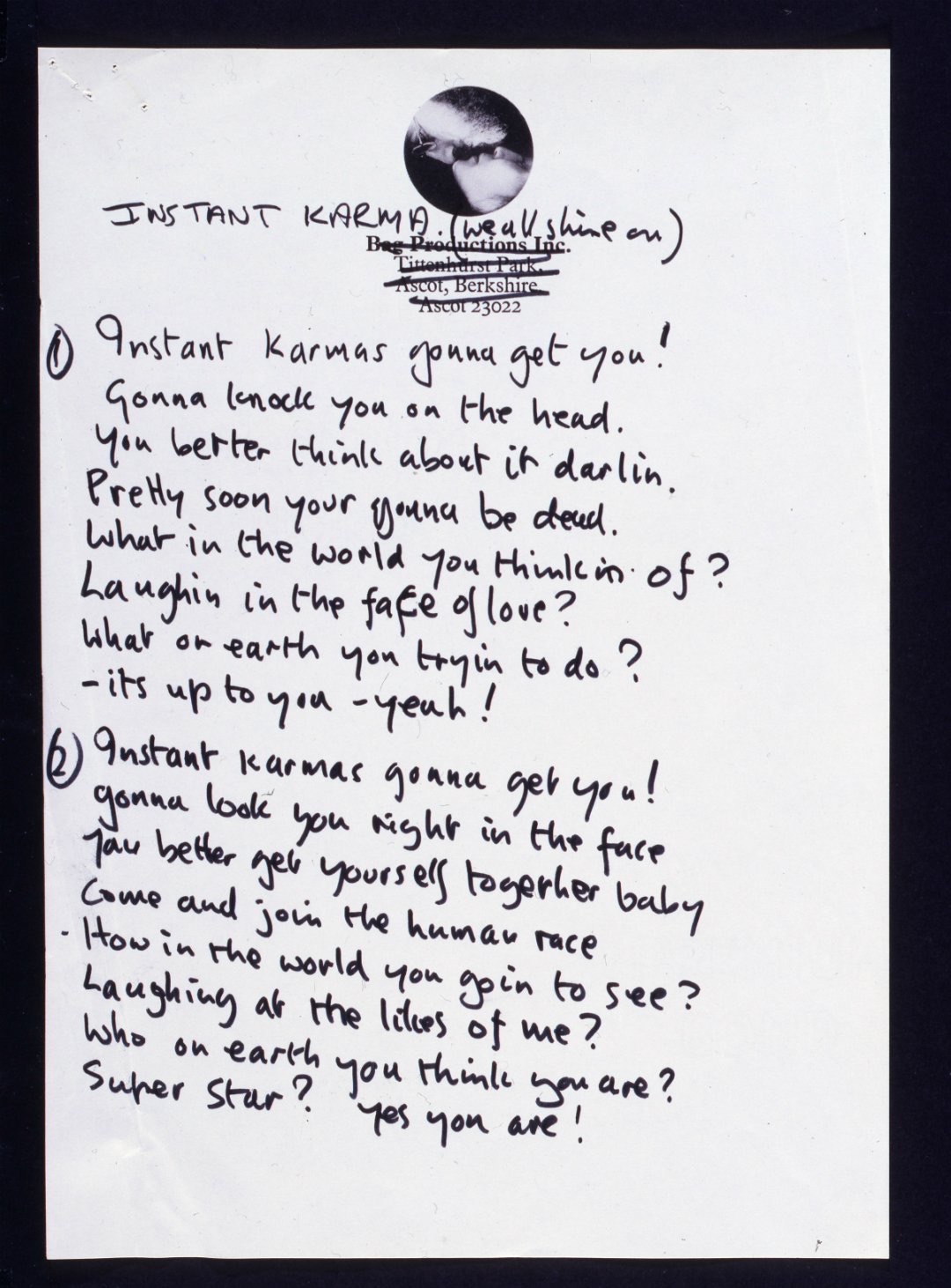 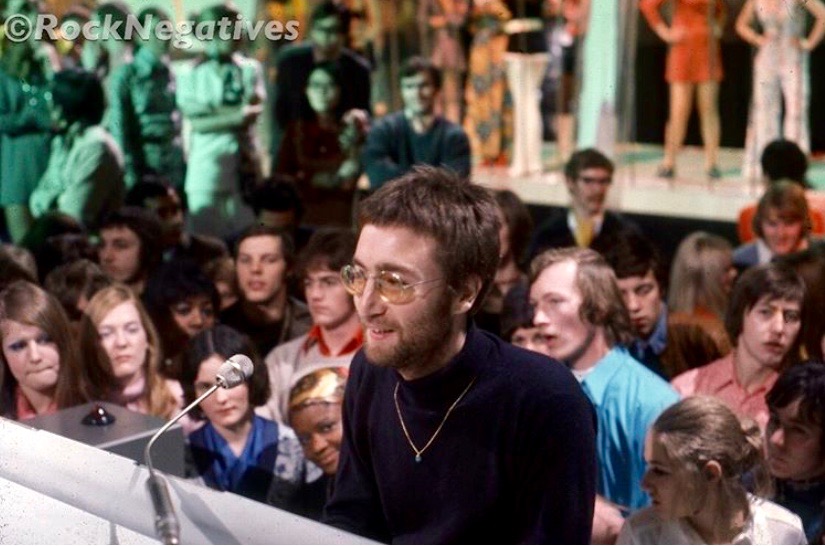 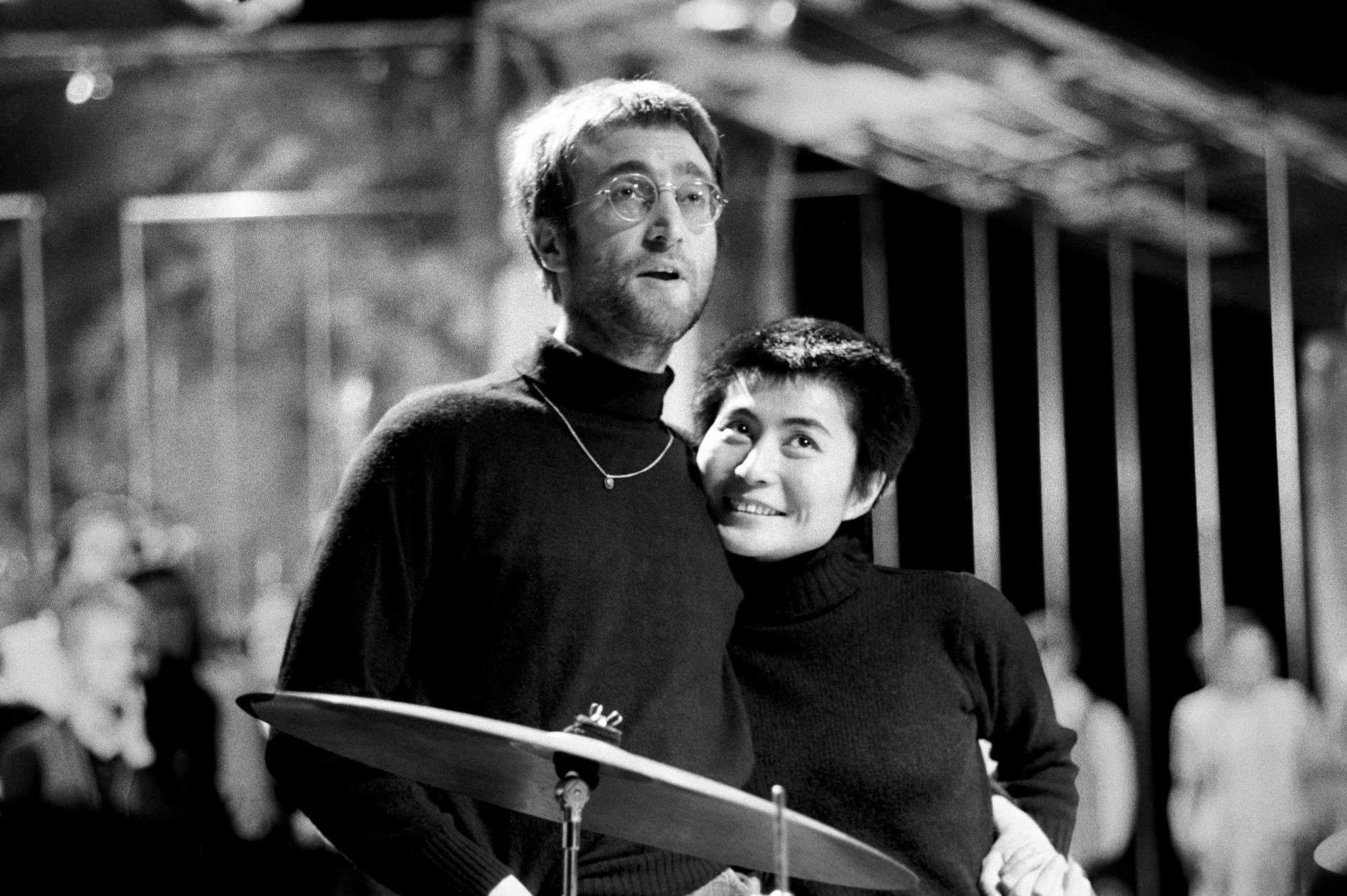 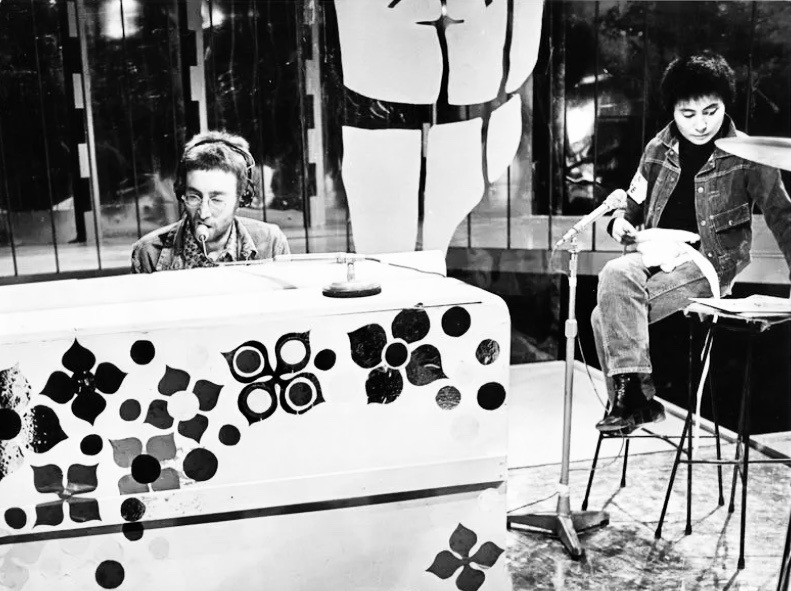 7 thoughts on “‘INSTANT KARMA!’ SHINING ON AND ON!! Lennon/Ono Plastic Ono Band”