“No one listened to it. But there it is, forever – the quintessence of articulated punk.

And no one goes near it.”

White Light/White Heat is the second studio album by the Velvet Underground; Lou Reed, John Cale, Sterling Morrison and Maureen Tucker. Nico, who sang the VU’s most relatable songs on their debut album was out. WLWH was recorded in September 1967 in New York and released on January 30th 1968. The world was certainly not ready for their first album – and THIS was way beyond THAT – much more of an outright aural assault. But if you peel slowly and see, the songs radiate.

The subliminal cover was designed by Billy Name of Warhol’s Factory. Warhol’s Bike Boy film actor Joe Spencer’s arm with a skull tattoo – black on black – was the double antithesis of the album title. It was the second cover that the Warhol ‘team’ designed for the band following Andy’s infamous banana on their debut album. The Fab Four had not yet begun to record The Beatles (their ‘white album’).

Out of the dark underworld of the VU’s debut album, a lyrical and physical light radiates through the band’s second six-song LP. Time has shown that at least half of the songs were latent masterpieces. It is hard to see the light at first, but it soon becomes blinding.

Ironically, on the day of his passing,

the final words that Lou Reed uttered on a Sunday morning

(when he asked his wife to take him outside) were,

The title track celebrates a methamphetamine rush, healing and also White Magic. Even a straight person could feel the drug rush and release mentally, physically and metaphysically through the steady, pounding beat, glorious dissonance and frantic guitar.

In a KVAN Los Angeles radio interview (November 1969) Lou talks about a Japanese form of healing that is “a way of giving off white light … I’ve been involved and interested in what they call white light for a long time.”

Specifically, ‘White Light/White Heat’ is often assumed to be about the exhilarating effects of crystal methedrine amphetamines, and Reed does say the song ‘is about amphetamines’ in his 1971 interview with Metropolitan Review. But an equally likely, and perhaps more interesting, inspiration is Alice Bailey’s 1934 occult book A Treatise on White Magic. It advises control of the astral body by a “direct method of relaxation, concentration, stillness and flushing the entire personality with pure White Light, with instructions on how to ‘call down a stream of pure White Light.’”

And it’s known for certain that Reed was familiar with the volume, as he calls it ‘an incredible book’ in a November 1969 radio interview in Portland, Oregon.

The album cover’s designer Billy Name was also an acolyte of Bailey’s White Magic. In an unpublished ZigZag magazine interview (1972), Reed says, “(Billy) got so far into it he locked himself in a closet for two years, and just never came out… I know what he was doing because I was the one who started him on the books [by Alice Bailey on magic], and we went through all fifteen volumes.”

Another enlightening track is ‘I Heard Her Call my Name’. Reed has conveyed that this song is also about enlightenment. Again, white light permeates the song, especially in Lou’s scorching, seemingly possessed guitar sounds. What many fans claim to be the best guitar solo in rock history begins after Lou utters, ‘…my mind split open’ at 2:15.

The disturbingly glorious, seventeen-minute improve jam ‘Sister Ray’ takes us back down to the underground with a plot of depravity. The song’s cast of characters include a black drag queen, some sailors, murder, sex and drugs. Reed’s guitar and Cale’s organ (no bass) battle for supremacy at high distortion.

Lou Reed showed us the wonders of the underworld – the ultimate reality show. His songs were peep shows into secret forbidden places and their inhabitants; hustlers, prostitutes, junkies and transvestites. He taught us all about decadence.

Our subterranean sleuth illuminated a time when New York City was gritty, seedy dangerous and genuine. The good old days.  He enlightened us to gender bending and hustling. He lived it all himself. An equal opportunity guy, Lou had relationships with men, women and transsexuals. An advocate for deviants and the downtrodden, Lou gave a voice to those who were never heard before. He showed us people just like ourselves, but although they were underground, they were in no way beneath us. We could easily become them.

The gorgeous delicate ballad ‘Here She Comes Now’ is reminiscent of ‘Sunday Morning’ with its gentle vocal by Lou, and delayed reverb. The song had been meant for Nico to sing on the first album.

‘The Gift’ is a short story of twisted romance, narrated by John Cale in his charming Welch accent – a lengthy hypnotic, increasingly dissonant piece with a simple, repetitive rhythm. Waldo Jeffers mails himself to his long-distance girlfriend, anticipating rapturous joy and surprise when she receives her package. But he is delivered just after his girl has slept with another man. In frustration of being unable to open the package, her friend hastily uses a metal cutter, which plunges through the top of Waldo’s blood-spurting head. (In fact, several songs on the album mention a head bashing).

Lady Godiva’s Operation is a contrast between the legendary heroine and a botched surgery.

With time, as with most of the Velvet Underground albums (and also Lou Reed’s solo work) the album became legendary. True, it’s not for everyone but for those of us who were drawn to its flame, we have seen the light!

Lou described the Velvet Underground to Sylvie Simmons of Mojo in 2005:

There was the sound to end all sounds. A staggering combination. Whoah! We just fell into the chasm of gold. Listen to this bunch of harmonies rubbing together, it’s astonishing. Put a drum under that – she can’t play a trap set and that’s a big advantage, you’re escaping that whole dreary set-up that they have till this day.

A succinct review by an amazon.com guest reviewer sums it up nicely:

… Lou Reed and company had musical ambitions that far exceeded their actual abilities. This is not a complaint, it is a compliment. 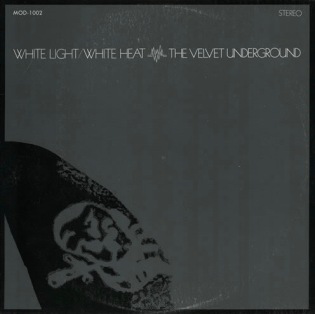 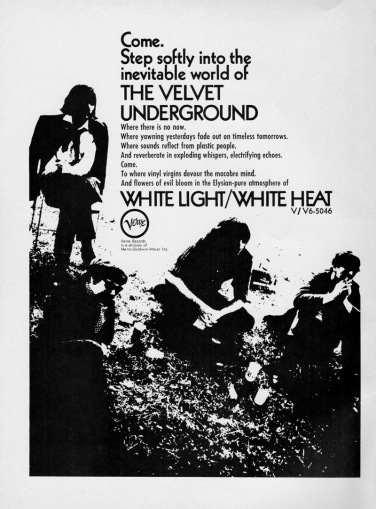 3 thoughts on “The Velvet Underground – White Light/White Heat – LET THERE BE LIGHT!”