This Ain’t No Disco!

How Sparks Parted The New Wave 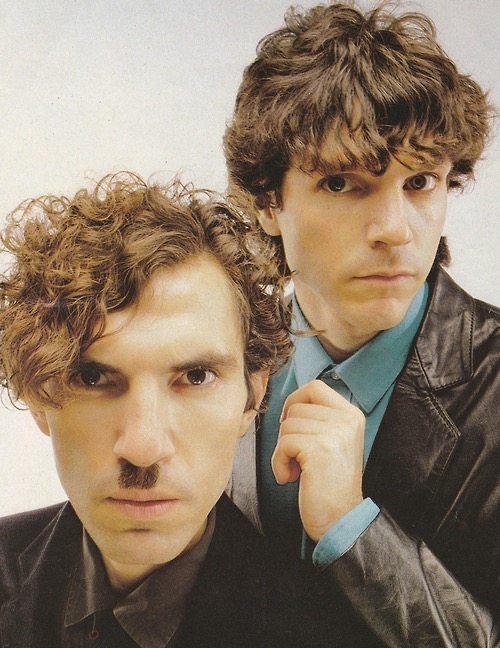 © Madeline Bocaro, 20008. No part of this site may be reproduced in whole or in part in any manner without permission of the copyright owner.

In 1979 punk rock was still the rage in England, and disco was devouring America. So where did Sparks fit in? With disco in England of course! This didn’t make much sense at all to their fans, but the Mael brothers made the best of both worlds.

Their take on disco had a European edge coupled with Sparks’ trademark sensibility. It became the perfect formula for a revolutionary new sound that would resonate through the decades. They may or may not have known it at the time, but Sparks were prophetically writing the Ten Commandments of Synth-Pop. Unfortunately, the commandment most often disobeyed by their eventual followers was, “Thou Shalt Be Original!”

In the days when Sparks were releasing an album per year, No. 1 In Heaven was the follow-up to the surprisingly ordinary Introducing Sparks. Ordinary became extraordinary seemingly overnight. As suddenly as Tyrannosaurus Rex became electric warriors, and as shockingly as when Dylan went electric, Sparks went electronic! They got as much flak from their fans as Dylan and T-Rex did in their time, but some of us were hip to this new change, and new fans became enlightened as well. The music press gave the album equal shares of praise and damnation. Sparks’ musical prophecy would ring true in due time.

For almost a decade, the usual Sparks album consisted of ten succinct, highly unusual pop songs. No. 1 In Heaven gave us six extended, highly unusual fluid epics; the shortest just under five minutes, the title track being the longest, outlasting both “Hey Jude” and “Bohemian Rhapsody” at 7:27, not to mention the re-mixes!

In 1977, Donna Summer’s electronic disco hit, ‘I Feel Love’  –  a collaboration between man and machine in a musical Metropolis approximating Kraftwerk at 78 rpm was recorded in Munich. The sound was achieved by using composer Eberhard Schoener’s Moog Modular 3P synthesizer. The song topped the charts worldwide.

The conflicting warm and sensual vocal performance over robotic trance music intrigued Ron and Russell Mael who were already bored within the constraints of a 4-piece rock band. Sparks went right to the source and recruited Summer’s producer Giorgio Moroder for their radical experiment in marrying pop with dance music.

Aside from David Bowie who was also recording in Germany with Roxy Music’s Brian Eno, using synthetic instruments for a more decadent ambiance (on his albums Low and ‘Heroes’) Moroder was the only producer using automated devices within popular dance music. This was a time when synthesizers were quite rare and expensive, despite being primitive. Moroder took the reins and found Sparks a U.K. deal with the very supportive Virgin Records (Elektra in the USA).

No. 1 In Heaven was recorded in Los Angeles (Musicland, Munich is listed on the album). Although the Maels were lured toward new electronic sounds, all the drums were played live. The track “My Other Voice” featured computerized hi-hat cymbals played in reverse.

“There were no drum machines, so Georgio had a drummer, Keith Forsey who came in and did 15 minutes of kick drum. The studio in L.A. was all walls of stuff with cables in it…You’d see these red lights go on and we’d go, ‘Wow!’. It was just like a new toy. We could never tour this record at the time because it was (technologically) impossible.”

The fashion models on the album jacket – one Caucasian and one Black – look cold and sterile yet still sexy, as their lab coats are blown upwards like Marilyn Monroe’s white skirt in the film, The Seven Year Itch. They stand the exact same position. Enroute to heaven’s laboratory they each hold a microscope, indicative of the groundbreaking musical experiment taking place on this record. The models were also featured on the stylized remix artwork. Sparks’  new logo – a spark plug – flashes in the upper right corner (with a USA denotation on American copies). The ‘Tryouts For the Human Race’ single sleeves and picture discs show robotic mannequin hands and test tubes, mixing 2 parts Rock with 2 parts Disco – and just a dash of Chemical X. The results were explosive!

Angelic nurse imagery. Are sexy nurses your idea of heaven?
Russell: Like I’ve always said, you can’t go wrong with a woman in uniform.

The typically brilliant Sparks lyrics were about fast-paced society (“Beat The Clock”) and the first song you would hear in heaven (their own “No. 1 Song In Heaven” of course, which peaked at No. 14 on Earth). “Tryouts For the Human Race” is the album’s ‘sexiest’ song. After a suggestive Sci-Fi intro, Russell lends his voice to those feisty sperm cells  – a major aspect of sex that is not usually on people’s minds when having it – in a production about reproduction. A twisted Biology lesson with a disco beat.

Ron Mael expanded his keyboard repertoire with synthesizers. He favored the coldness and inhumanity of the mechanized sounds and mesmerizing beats contrasted with Russell’s glorious vocals. Ron un-slicked his hair and grew it long and wavy, resembling a mad scientist  – or was it more ‘nutty professor’?

“I wouldn’t be caught dead in a disco!”

‘Beat The Clock’ was like a Velvet Underground song when I wrote it at the piano, and if you listen to it with that in mind, you can kind of tell, but what Georgio did with it was amazing.” – Ron Mael, Mojo magazine UK 2002

Perhaps due to Ron’s mention of The Velvet Underground, there was nearly a collaboration with Andy Warhol!

“…we wanted him (Warhol) to duet with me on ‘Beat The Clock’. We contacted his office and he said, ‘Yeah, I’d love to do that’. And then put us back on to his business manager who said, “andy will do that – for $10,000. We went, “Ooh, you’ve caught us a little short!” (Laughs) we’d have robbed a bank to get that money, because to have a duet with Andy Warhol would have been amazing.”

The promotional video for “Beat The Clock” featured Ron & Russell (with a bevy of female factory workers) mass-producing life-size cardboard cutouts of themselves in a race against a giant clock. Perhaps this was an ‘indiscreet’ commentary upon the tedium and uniformity in rock/pop music and the stereotypes within disco, until they were effectively mixed into one medium by Sparks. Charlie Parker never dreamed that ‘fusion’ could sound like this!

“Some people were taken aback because we were considered a rock band up until then. It was a really bold and provocative album to do at that time. We were pleasantly surprised that it had as much commercial success, for something that initially was kind of controversial. Then obviously with time, the whole history of that album has been rewritten where it is now seen as a Bible for that whole genre of music.” – Russell Mael

Russell recalls working with Moroder’s modular Moog synths as “So much trial and error, and so many options. It was like the old telephone operator thing where you’re patching two phone calls together. You were patching sounds together. But the whole idea of sequencers, back then it was kind of primitive in that everything was divided into 16th notes. By pulling one plug out of one of those 16 slots, it left a hole and that’s what gave you the stutter on that particular beat.”

Initially, the drum track was provided by a Moog-simulated kick, before drummer Keith Forsey added a live beat. Russell: “Keith just spend 16 minutes hitting a kick drum to a click and then add fills after that. I think that’s also what gave that album less of a robotic feel. It had some bit of humanity to all the electronics because all the drumming was live.”

Four singles were released. “La Dolce Vita” appeared in early 1979 in European countries. It did not chart.  After eight weeks, the title track finally charted, peaking at No. 14 in the UK. It was Sparks’ first UK hit in four years. They performed the second single “Beat The Clock” on Top of the Pops, which made the Top Ten.

“Tryouts…” reached No. 45 in the UK. Several 12-inch British singles were issued on a varied rainbow of colored vinyl with exclusive longer remixes. America saw the single release “Tryouts for the Human Race” (with “No. 1 Song in Heaven” as the B-side). The Maels portrayed werewolves in the video, however, America remained oblivious. Perhaps Sparks’ thought-provoking lyrics were too complex for the mindless dancing masses. But subliminally and with the passing of time, the album influenced others to cross musical boundaries.

Ron Mael: “The downside was that just because of the nature of the technology, we were never able to do that album live until the mid-’90s, because there was no way to bring a synthesizer the size of a building with you onto the stage.”

Soon after, Blondie would collaborate with Georgio Moroder who co-wrote and produced their smash hit ‘Call Me’. M appeared with the percolating hit ‘Pop Muzik’. Sparks spawned the pop duo. New bands emerged from the UK two by two, and climbed aboard the ark that Sparks built; Human League, O.M.D., Gary Numan, Soft Cell, Depeche Mode… The atmospheric Ultravox quickened their pace. At first labeled New Romantic or Synth-Pop, the new genre crossed the ocean and became New Wave (eventually spawning Erasure, the Pet Shop Boys and countless others).

“When we were doing ‘Love Will Tear Us Apart’, there were two records we were into: Frank Sinatra’s Greatest Hits and No 1 In Heaven by Sparks.”

The Mael / Moroder-penned track “My Other Voice” contains the foretelling line,

European bands were now successful on American radio. Sparks, of course, still were not. Ask any of these groups who their inspiration was, and they will inevitably say, “David Bowie.” But we all know who really parted the waves!

“One time, Georgio (Moroder) wanted some songs for Donna Summer, so I tried (to write). To me, they weren’t very good and he didn’t like them either.”

“Always cover your synthesizers at night

or the dust can wreak havoc with the keys.”

“The most thrilling albums to make are those where you go in not having much of a clue what you’re doing or where you’re going, and where, at least once every thirty minutes, you ask yourself, ‘Is this what it means to commit both artistic and commercial suicide?’ That was the case with the No.1 in Heaven album.”
– Ron Mael / Los Angeles, January 2019 upon the album’s 40th anniversary. 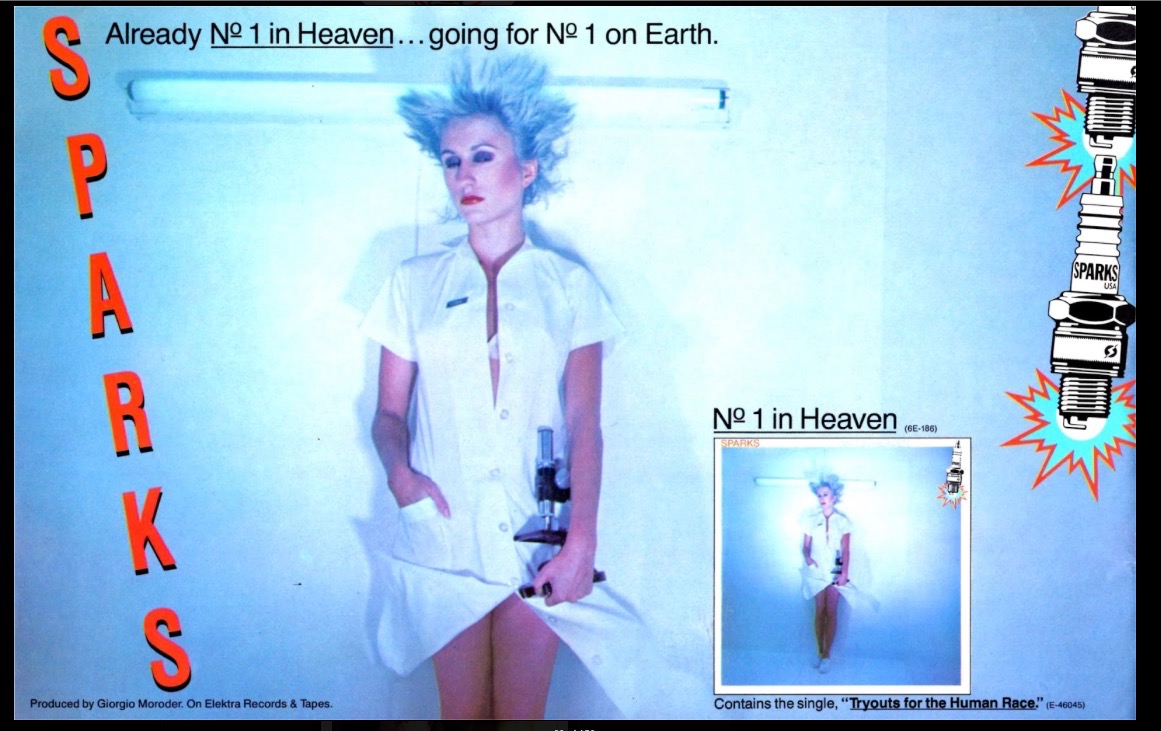 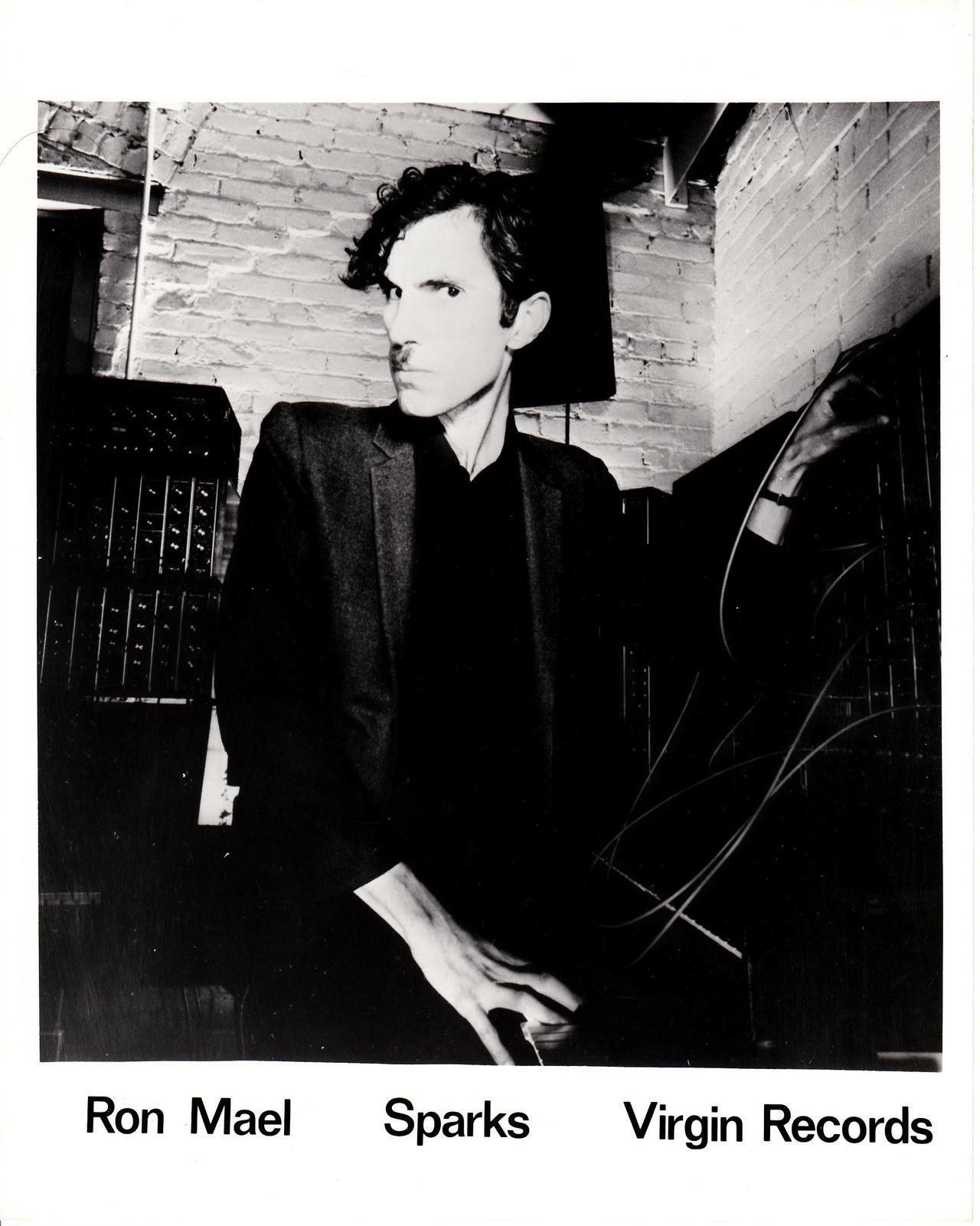 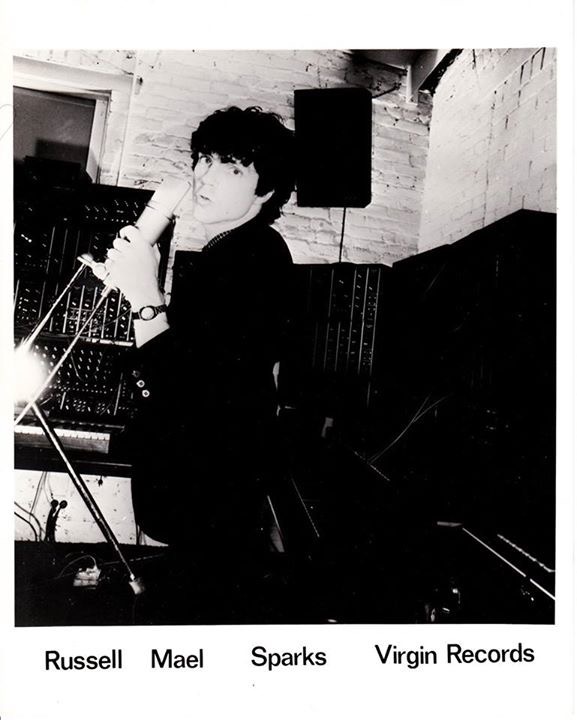 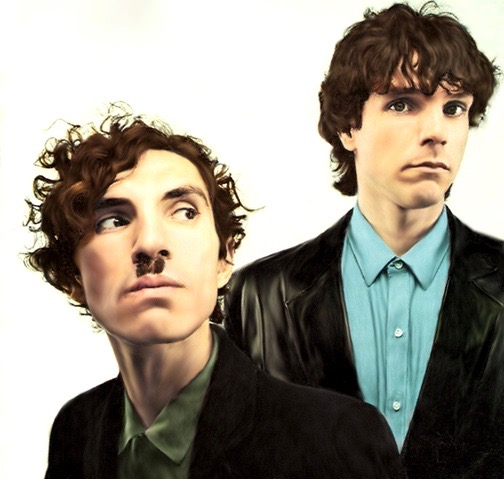 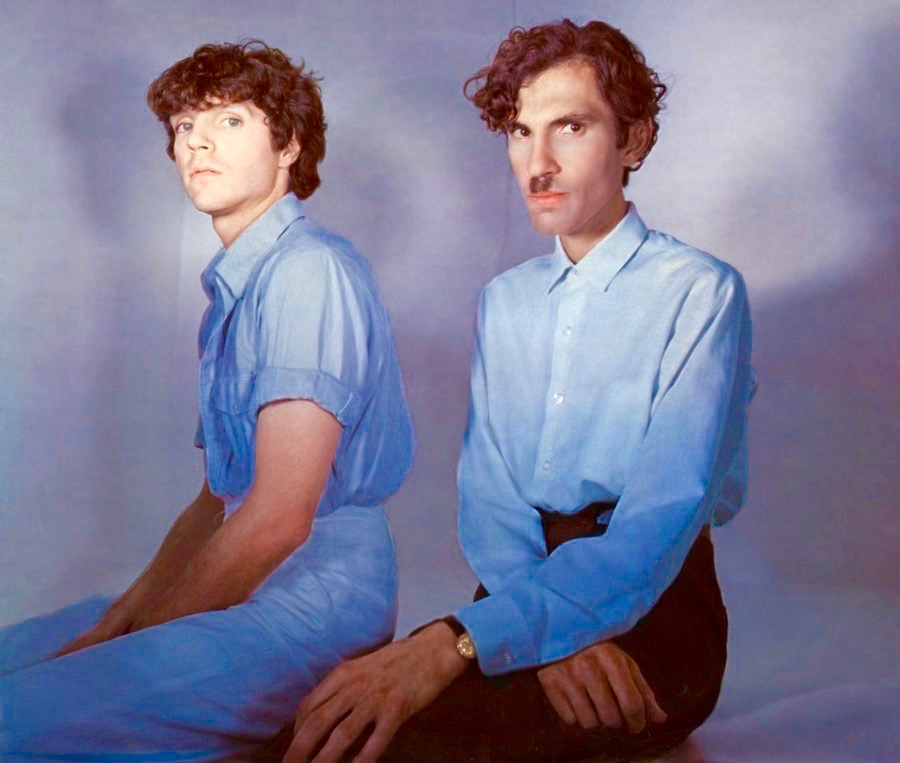