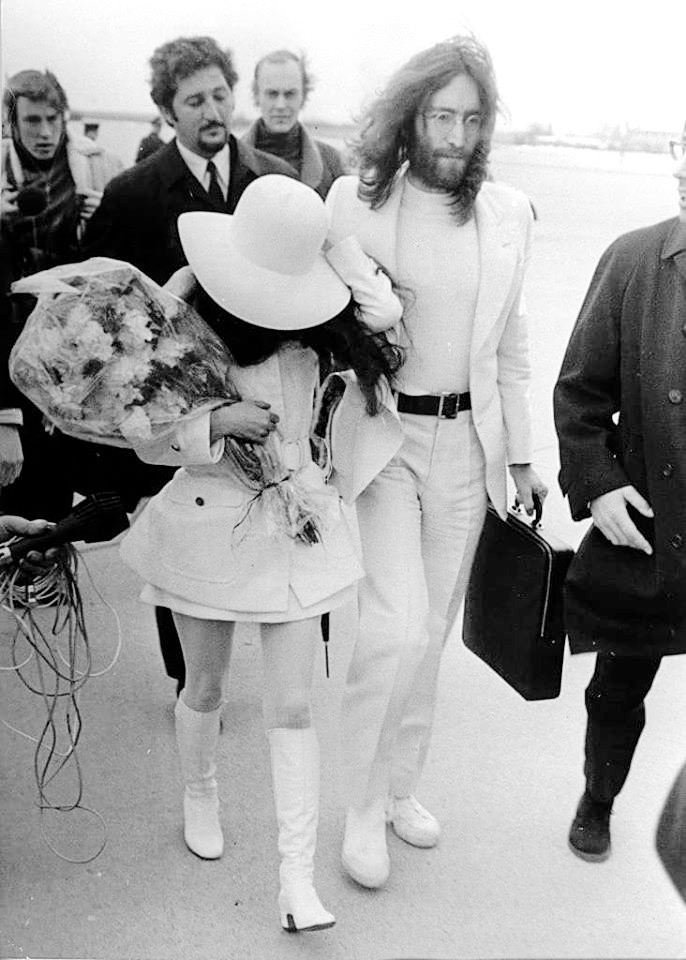 On the morning of March 31, 1969 John and Yoko took a quick flight from Amsterdam to Vienna. They had been camped out at the Amsterdam Hilton where they staged their first Bed-In for peace, which doubled as their honeymoon.

The newlyweds continued their campaign for peace in Vienna. The worldwide press was invited to the Hotel Sacher. They were excited to see the Beatle and his new bride. However, they were perplexed and confounded when they saw the couple enveloped inside a white bag. This was Yoko’s concept of ‘total communication’ with no visual obstacles, judgments or preconceptions.

Yoko got the idea for Bag Piece from the popular children’s story, The Little Prince in which a wise fox tells the prince that in order to understand the world, we have to look beneath the surface. “One sees clearly only with the heart. Anything essential is invisible to the eyes.”

John and Yoko could not be coaxed out of the bag, not even for the hotel’s famous chocolate cake!

Reporter: Would you come out if we gave you a Sacher-Torte?

Lennon: We’re not coming out for the conference, no. But we’ll be out for chocolate cake later.

The Hotel Sacher opened in 1876, It is a five-star hotel which faces the Vienna State Opera. You can still order the chocolate cake for which the hotel is famous (Sacher-Tort) which John & Yoko ‘ate in a bag’ for  €7.50.

Here is the transcript of the interview from Bag Piece in Vienna!

“…It was a very strange scene because they’d never seen us before, or heard – Vienna is a pretty square place. A few people were saying, ‘C’mon, get out of the bags.’ And we wouldn’t let ’em see us. They all stood back saying, ‘Is it really John and Yoko?’ and ‘What are you wearing and why are you doing this?’ We said, ‘This is total communication with no prejudice.’ It was just great. They asked us to sing and we sang a few numbers. Yoko was singing a Japanese folk song, very nicely, just very straight we did it. And they never did see us.”

John immortalized the events in a song.

The Ballad of John & Yoko

Made a lightning trip to Vienna
Eating chocolate cake in a bag
The newspapers said, she’s gone to his head
They look just like two gurus in drag… 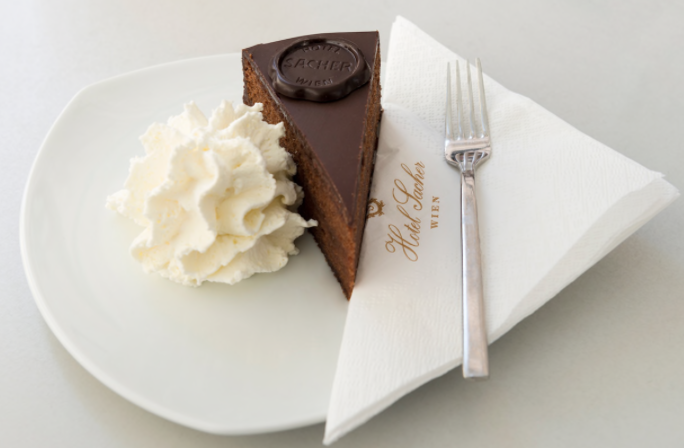 The Lennons were also in Vienna to promote their new film ‘Rape’, shown on Austrian TV in which cameraman (Nic Knowland) relentlessly pursues a woman (Eva Majlata) through the London streets with increasingly disturbing results.

See my full story about the film Rape:

After forming an institution for animals in her native Hungary, Eva had a hard time finding film work.

She was brutally murdered in 2008:

In the mid-1960s, Yoko once worked in the world’s first macrobiotic restaurant. Paradox was located at 64 East 7th Street in Greenwich Village, NYC – right around the corner from The Fillmore East. Folk singer Loudon Wainwright III also worked there. He wrote a song about it called Bruno’s Place. Activist Abbie Hoffman described it as “a neat cheap health joint that will give you a free meal if you help peel shrimp or do the dishes.” They also fed street kids for doing menial work. The restaurant closed in 1972 after seven years in business.

Paul Krassner (author, journalist and founding member of the Yippies) recalls one of Yoko’s art events (Bag Piece/Stone) being performed at the Paradox.

“People would climb inside these huge black burlap bags, singly, or with a partner and then do whatever they wanted, providing a floor show for patrons while they ate their brown rice and sprout salad.”

GARY: What was the Paradox?

LAURA: The Paradox was the first Zen macrobiotic restaurant in New York. I remember entering and seeing a little structure built in the middle of the room. I don’t remember if it was wood, but inside there were big black cloth bags on the floor. You were supposed to climb in the bag and close the top. The installation was called STONE. The artist was there. Her name was Yoko Ono. This was, I think, in 1965…

There will never be as perfect a macrobiotic restaurant as the Paradox again. It was so scrupulously planned and executed according to the philosophy of George Ohsawa (founder of the macrobiotic diet). They used the best ingredients and the aroma from the fresh oils and umami inherent in the diet was always scintillating. The restaurant had a feel all of its own. Not a typical Japanese eatery, it was singular in its character and flavors. 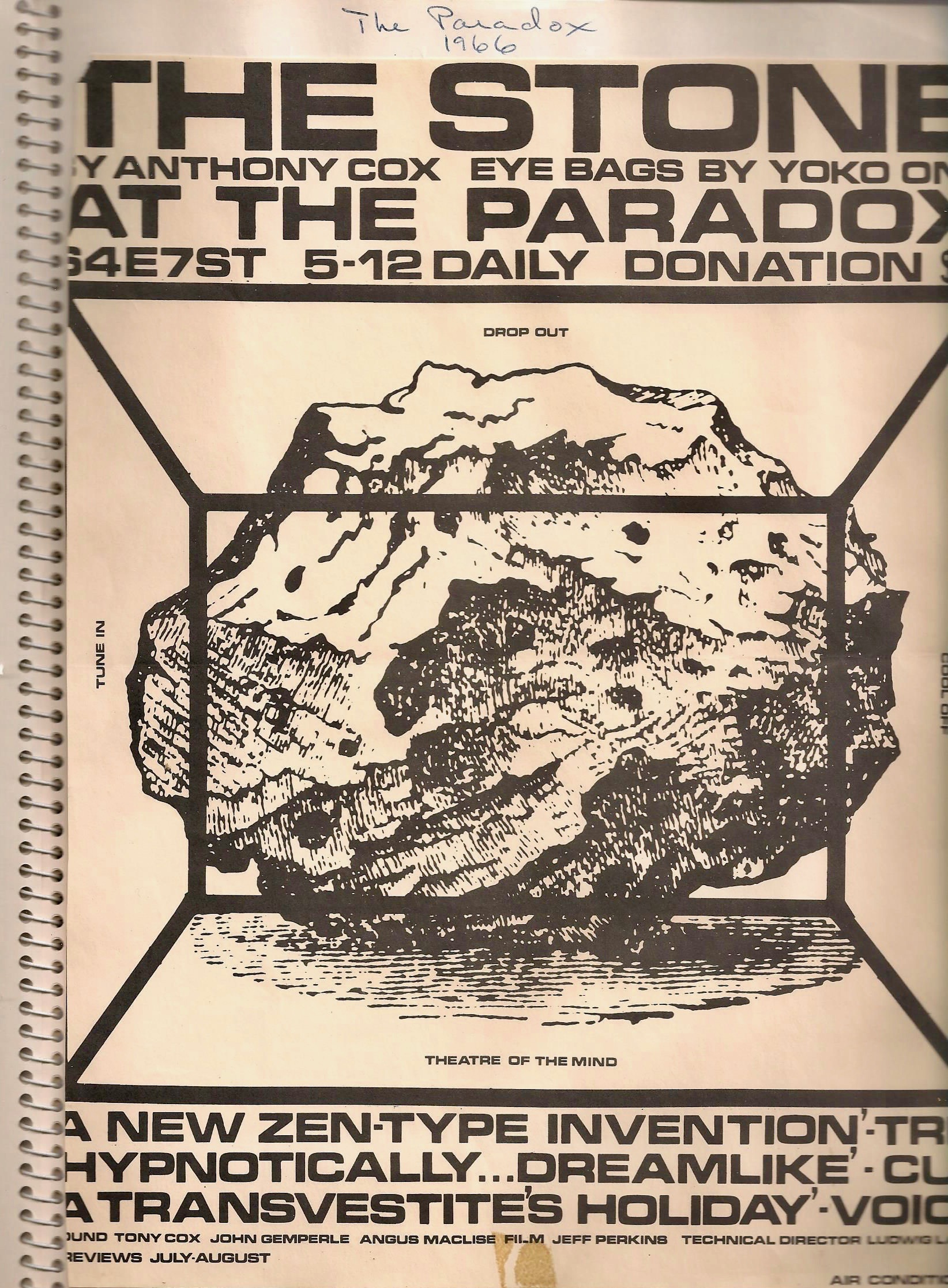 In 1968 John and Yoko appeared in a bag the Alchemical Wedding (A gathering of underground artists) at London’s Royal Albert Hall.

In 1969, Bagism was reprised was at the New Cinema club in London. 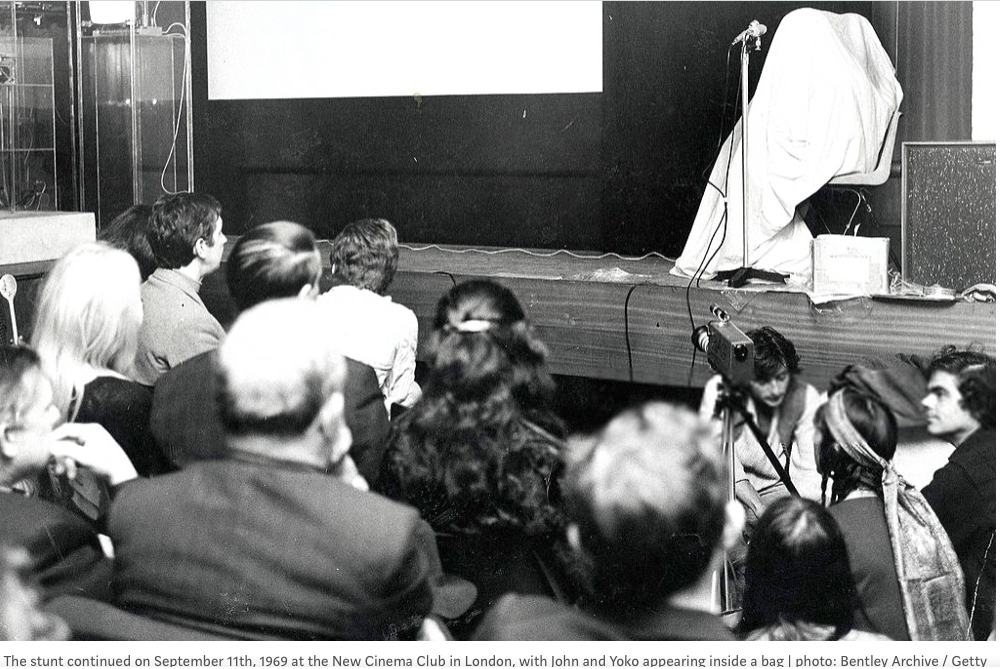 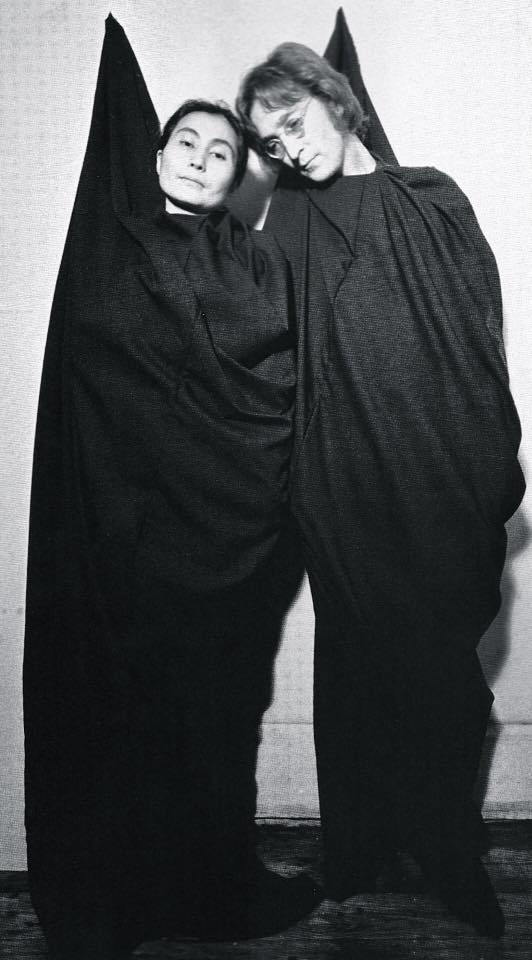 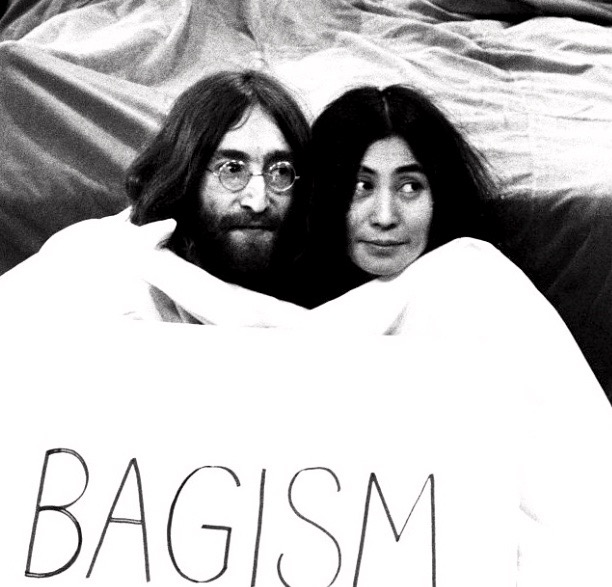 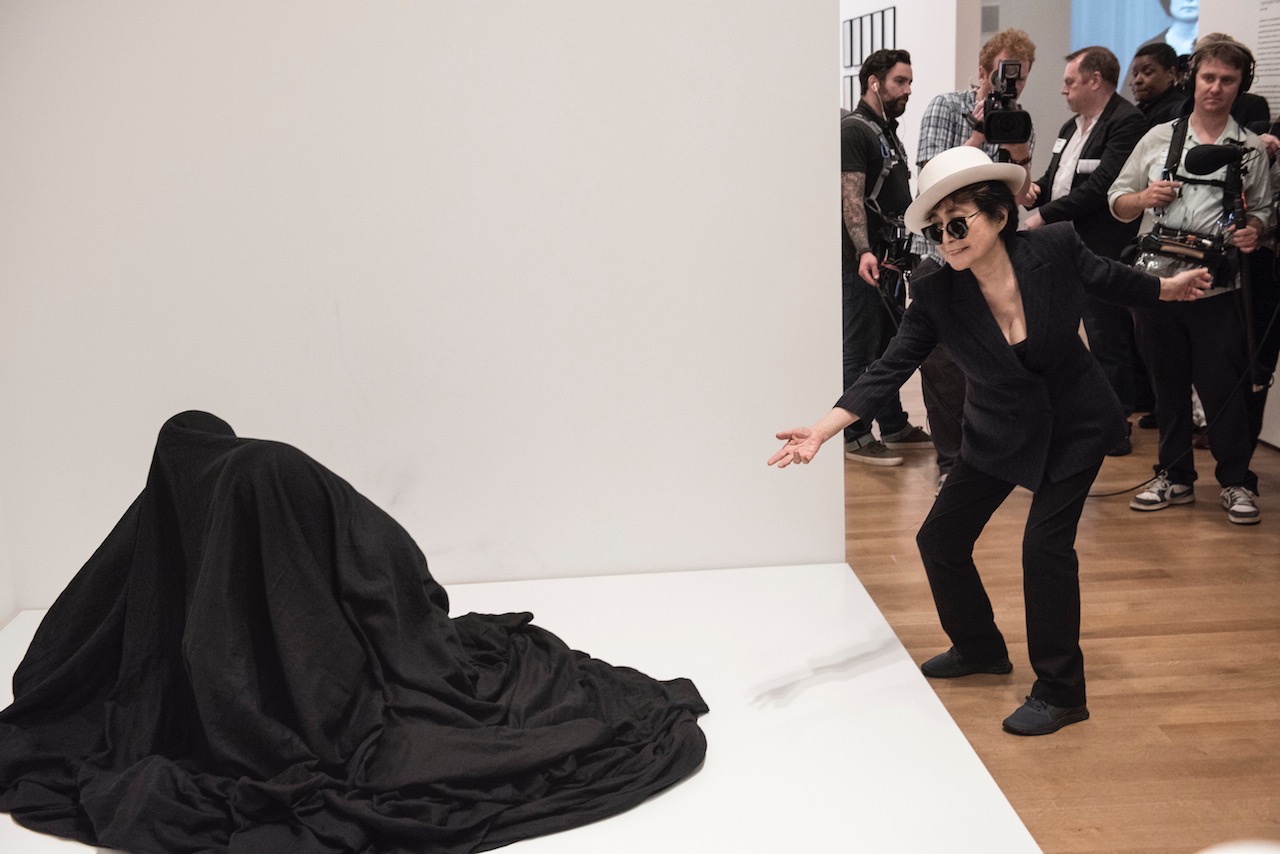 This is hilarious! Conan is really super tall, so Yoko tells him, “You don’t even look like you’re from the human race. You look like a tree or something!”
Then they get in a bag!!