Madeline:  What is your earliest childhood memory?

It was in my mother’s womb. The size of the womb kept changing and it scared me.

I love winter. I was born in February, the morning when

the whole world around the hospital was covered in snow. 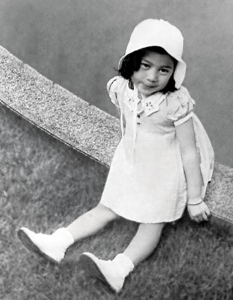 I realized that we were very wise when we were young.

We are getting a bit doubtful of ourselves now. Don’t be.

The child in you will save you.

So all the babies who are born now are thinking, “We miss that.” Our brains miss that. We were not squeezed –  the brain was not squeezed. So our body is always wanting that squeeze – that big squeeze that we didn’t get.

At Dawn with Yoko Ono 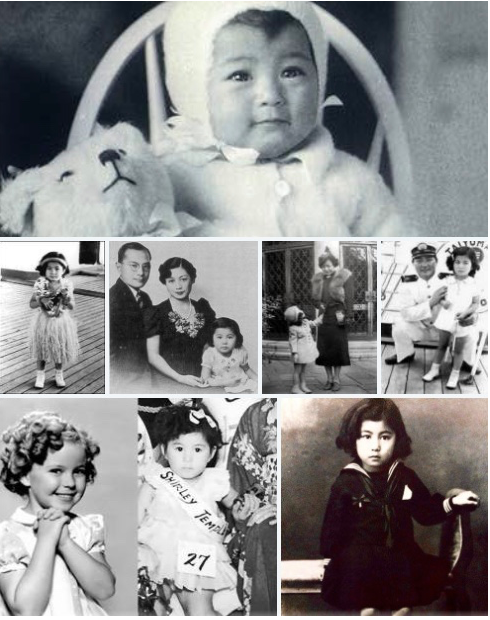 “Even before we are born, we are appropriately distorted by parental training, but our state at the time of birth is the closest to nature. However, the baby gets the milk only at the times his mother has fixed. Although he wants to drink more, his mother determines a certain quantity, so she forces the rhythm of society upon him, and finally he loses his natural rhythm. The generally eliminating views and attitudes are forced upon him by his mother. He has to accept things like nutrition of 2,400 calories every day, or that he has to wear a necktie-all that ties him up.”

– Just Me! – Yoko Ono, Several of Yoko’s essays and her autobiography compiled by Takahiko Iimura (Kodan-sha 1986) 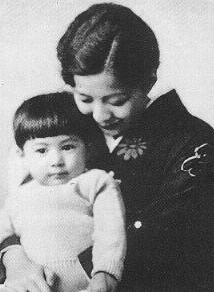 …All children belong to all of us. The exclusive ownership of children is connected with nationalism and capitalism and bad things like that. A child is brought up with family pride and taught to believe it’s different and better, when really it’s not. I used to think it would be nice if all people interested in bringing up children would register, and when a child is born it would be given three sets of parents of all different kinds—maybe a politician, a farmer, and a fisherman—and it could always change them. I’m thinking that way now again.”

…And please remember, in the story of Solomon it was the real mother who gave up her child rather than let it be cut in half.” 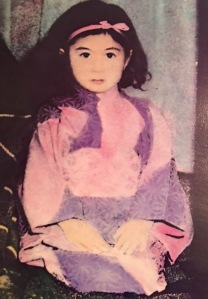 I was totally in love with snow all my life!

My mother told me that it snowed all night, and then I was born. She had the window open and was surprised that it was snow covered to way, way distance.

She had me in her arms and prayed that I would have a good life!

I remember how bright the snow was.

I know you’d think I couldn’t possibly see on the first day! Well I did.

For my childhood I was mostly alone – it gave me the power I have now.

My childhood is now! I don’t look back at the other one because I’m never going to get it back. No point. 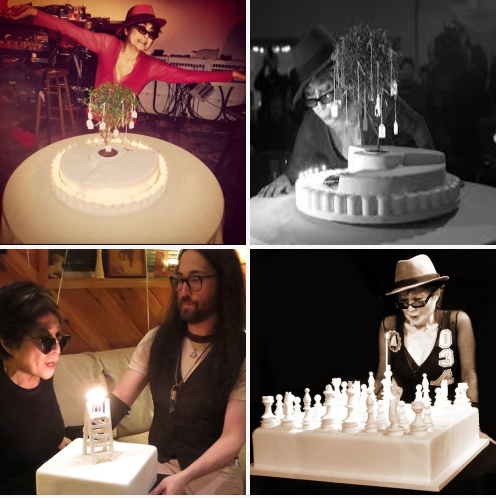 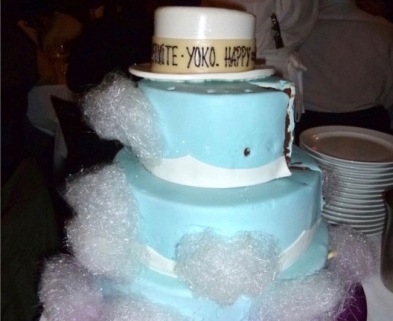 This year’s ONOCAKE has a very obscure reference that most people would never guess.
Of course it was the first thing on my mind!

The true meaning of the cake comes from her appearance on the David Frost show which I have on an old VHS tape. Yoko repeatedly tries in vain to explain (to the baffled host) her wacky concept that the Earth is a giant mixing bowl, and that “we are all just trying to hold onto the spoon.” Hence the cake is shaped as a globe filled with batter and a giant spatula.
The title, ‘Everything in the Universe is Unfinished’ refers to Yoko’s latest book (published October 2018 – read my review here: https://madelinex.com/2018/09/25/yokos-unfinished-symphony/

Credit goes to Sean Ono Lennon who totally understands and appreciates his precious mother in every way possible! 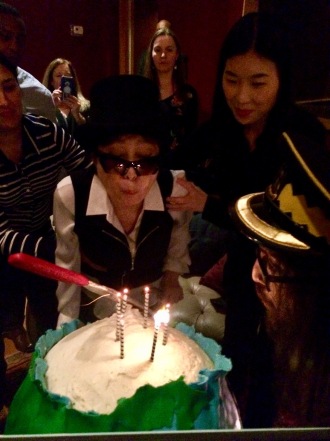 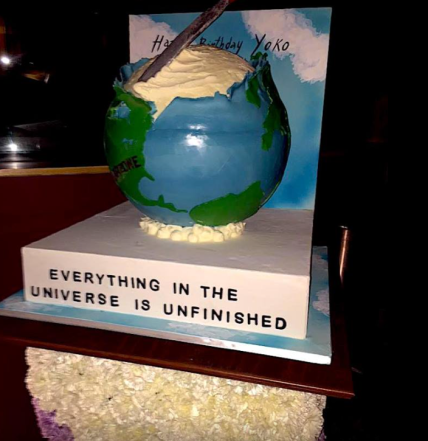