I had a wonderful chat with artist Echo Morgan about her performance. Yoko requested that Cut Piece be performed at the opening of her Peace Is Power exhibition in Leipzig. Over time this masterpiece – performed many times by Yoko and by other artists – has become legendary. Echo Morgan was approached by the museum to be the performer, as they were interested in bringing her own art to the museum at a later date.

“I made a promise to myself not to participate in other artist’s work; not to react someone else’s performance…When Alfred Weidinger, the director of the Museum of Fine arts Leipzig approached me with the idea of performing Yokos Cut Piece. I fall into deep thoughts.
Cut Piece was first performed by Yoko Ono on July 20, 1964 at Yamaichi Hall, Kyoto, Japan. The artist entered the stage in her best dress, sat in a traditional sitting position, and invited the audience to cut pieces of her clothing with scissors and take the piece with them.

I met Yoko in 2009 at a design boutique in Notting-hill gate, Feathers, where I have worked throughout my study years in London. I helped her chose few outfits: jackets and shirts and 5 hats. While packing the clothes, I said to her: My husband gave me a piece of broken vase in 2003, he said it was from your live performance in Tate Modern and you invited the audiences to put the vase back together in 2013, we got married in 2004 and we have been cherish that piece of vase and really look forward to rebuilding it with her. Yoko smiled and asked me for pen and paper. She wrote down: Dear Luke and Echo, I give you a sun. Love, Yoko Ono. She even drew a smiley sun.
2011, I separated with Luke, went to the Royal College of Art and became a performance artist. Same year, I did a performance: I Buried My Loss, together with many sentimental letters and photos I left the note from Yoko and her piece of vase behind. The only thing I kept was his surname: Morgan.
As a pioneer in conceptual and performance art, Yoko’s work has moved and influenced many people. Including myself! I do feel deeply honoured to be approached to perform her Cut Piece at the opening of YOKO ONO PEACE IS POWER at MdbKLepizig. So, for one time only I will break my own promise, this is my tribute and love for Yoko’s art and life I do believe it is a fate that I have to take this offer. There for, I would like to take this opportunity and mark this performance as my last performance under the name Echo Morgan.

There was some controversy over having an established young artist in her own rite (who happened to be Asian) perform the piece, as some thought that her resemblance to Yoko would make her seem like an imitator. However, after the curators met with Echo (a Chinese artist based in London) they realized her deep understanding and determination to do this work, and agreed that she was perfect for the piece.

Performer sits on stage with a pair of scissors placed in front of her and asks the audience to come up on the stage, one by one, and cut a portion of her clothing (anywhere they like) and take it. The performer, however, does not have to be a woman.

Echo told me that her experience was surreal. She was haunted by the large size of the room (1,000 seats which were all filled, as was the standing room) and a live stream to 9,000 visitors in the gallery.

The circumstances (beyond Echo’s control) were more like a grand theatrical staging. Echo did not realize that the museum had the event programmed as a 90-minute performance, as the director and the mayor were to give speeches at the end. She was now on a schedule that she could not control and was worried when some aggressive participants cut large chunks of her clothing early on, speeding the piece along too quickly.

Echo ceremoniously approached the stage, sitting side-legged in the same way that Yoko had done, remaining motionless. She made the announcement, “Take the scissors. Cut a small piece of my clothes, One at a time. Take it with you. It is a gift.” She added, “My body is the scar of my mind.” paraphrasing Yoko’s song “O’Wind” from the album Fly (1971).

Although this stipulation was not in the original instruction, Yoko had always worn her best clothing for each performance – usually sacrificing a black dress from the London shop Biba. Echo wore formal designer attire; a white Dolce & Gabbana shirt, a black Prada skirt, a black Armani jacket and Chanel shoes.

Echo told me that she added the detail of black tights and high heels as a feminist statement (Charlotte Moorman had worn a ball gown during her several performances of Cut Piece). The artist’s shoes were removed by two participants, each of whom took one shoe and promised to bring them back again in 100 years (a reference to Yoko’s Promise Piece, which had originally inspired Echo’s performance).

Echo was completely absorbed in the moment, enjoying the sound of the cutting and of people’s footsteps echoing from the floorboards in the large hall. She was startled when man cut her bra and waved it around triumphantly, provoking opposing reactions – cheers and gasps of anger – from the large crowd viewing the live stream. But she knew that she was relatively safe amongst so many viewers. Other cutters were more hesitant, and most were less aggressive than she expected.

The cutters were also greatly affected. Most women were stunned by the performance and participated in a motherly, protective manner. When Echo’s bra was removed, two women wrapped the artist’s naked torso in two scarves – swaddling her like a baby. The director signaled that this would be a beautiful note on which to end the performance, but Echo decided to remove the scarf and continue.  When all of the artist’s clothing was finally cut away, a woman made a grand gesture by cutting off a large piece of her own skirt, placing it across Echo’s lap, clasping her hands and bowing down to the artist as though she were a deity (the essence of Yoko’s intent of Cut Piece – the selflessness of Buddha*).

A most touching detail devised by Echo was at the end of the performance. When completely naked, she picked up the scissors and cut a piece of her own hair and left it on the stage before standing up and walking away. “It is a gesture of returning her a promise that I lost.”The intent was “To leave a part of me, after nothing was left of me, – my DNA – for her in return for that piece of vase that I had lost.” (Promise Piece). The artist asked Yoko’s long-time curator Jon Hendricks for permission to do this, which he gave wholeheartedly, knowing that Yoko would appreciate this addition. But of course, this ‘edit’ provoked a big reaction amongst the German art crowd. However, it was a poignant gesture that Yoko would certainly love – with its subtle reference to Hair Peace (1969).

Concerned museum patrons approached Echo the following day, asking if she was OK. This was her final performance as Echo Morgan. She will use her name Xie Rong from this point forward.

On the Museum’s main Facebook page, you can find the whole 2-hour live-streamed film. 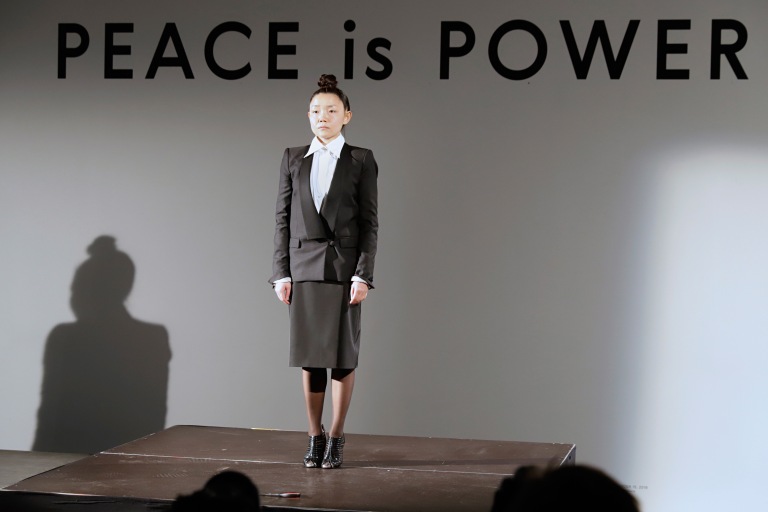 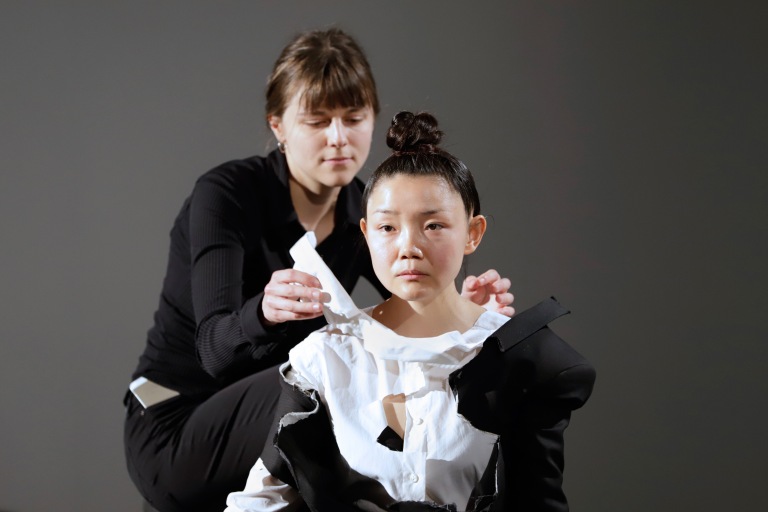 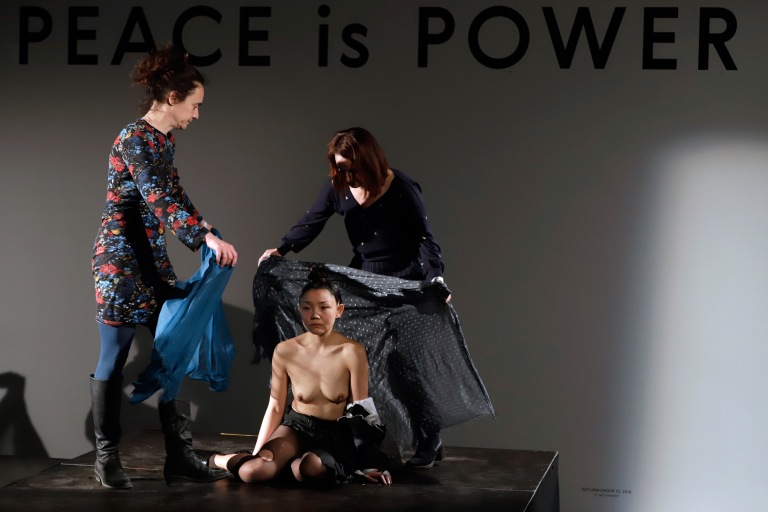 Read more about the artist:

Artist’s statement: The role of translation, the passage between gesture, body and voice, the shift from Chinese into English and back again, the relationship between performance and prints this is the sense contained within my work. Always movement across surfaces, entering and exiting backwards and forwards therefore I cannot settle on any one point. I am in flux, restless: a pure relationship between motion and the void.

I love Echo’s piece “Be the Inside of the Vase” It reminds me of Yoko’s Promise Piece/Mend Piece.

The performance ‘Be the Inside of the Vase’ was divided into two parts.
The first story began with my father’s attempt to commit suicide. The performance revealed my uneasy childhood and difficult relationship with my father. I was still and silent whilst my voice revealed the narrative using a pre-recorded audiotape. In the second performance the story moved towards my relationship with my mother. Through my rather brutal personal history I addressed sexually political statements such as: from my father: “Women should be like vase, smooth, decorative and empty inside!” From my mother: “Don’t be a vase, pretty but empty inside, be the inside, be the quality!” From myself: “This is my voice, my story, my childhood, I am not a vase!.”
http://echomorgan.com/#/be-inside-of-the-vase/ 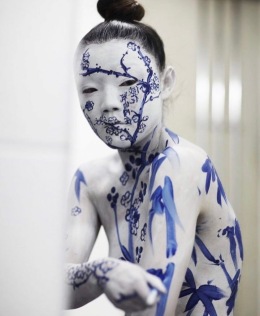 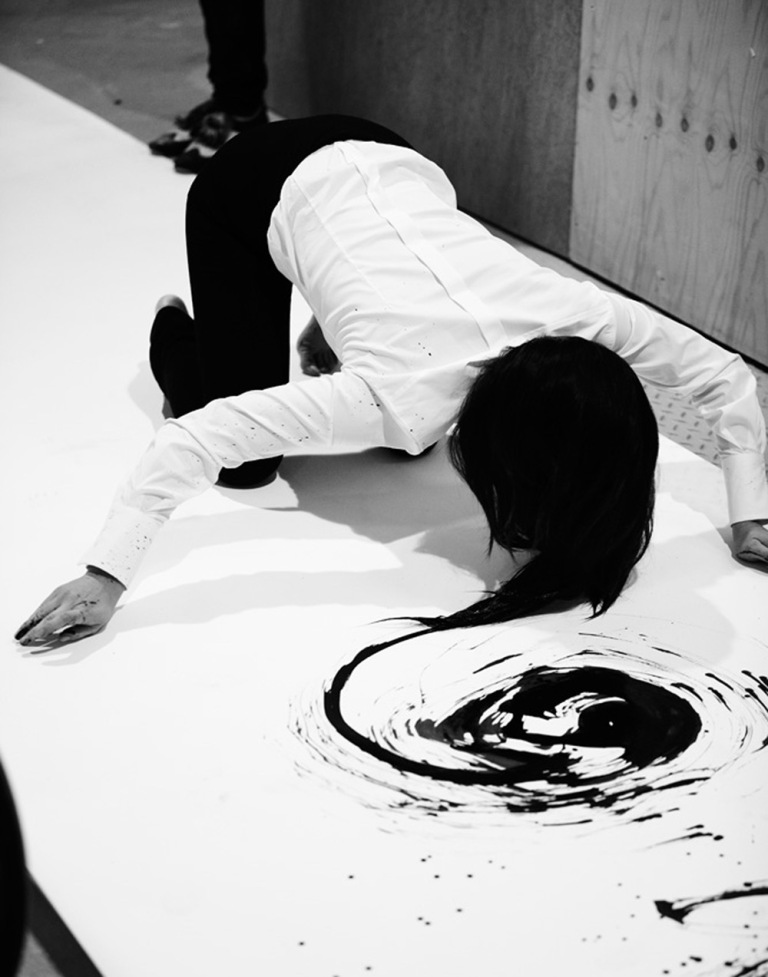