...When Bowie was truly a cracked actor.

“Lightning bolt, an electric kind of thing. Instead of, like, the flame of a lamp,

I thought he would probably be cracked by lightning.

… as he was sort of an electric boy”

THE TIME
Three dates are parenthetically listed next to the title of ‘Aladdin Sane’: (1913-1938-197?). The first two dates reference the preceding years before the two World Wars broke out. The third year – with the question mark – is when Bowie thought World War III would start. Well, luckily it didn’t happen in 197? !!! These dates are printed differently on various releases of the album. Along with these dates is printed, ‘RHMS Ellinis’ – the name of the ship on which Bowie wrote the album.

THE LOOK
Bowie’s impression of America was written all over his face, in red, white and blue. His new alter-ego was schizophrenic, his face split down the middle by a lightning bolt. The songs of Aladdin Sane present his harrowing view of the USA. Two thin powdery white stripes beneath his nose imply the lines of coke that his new main character, Ziggy’s successor, had consumed along his journey.

Aladdin Sane was schizophrenic. That’s why there were so many costume changes.

He had so many personalities.

Bowie ‘borrowed’ his lightning streak look from Vaudeville star George H. Chirgwin, known as the white-eyed Kaffir. One day while in his customary blackface, George Chirgwin had something thrown at his eye. After rubbing his eye, he appeared onstage with the audience roaring with laughter, and him not knowing why. Afterwards, he realized that his blackface makeup had completely rubbed off of his eye, so he kept this look as his own.*

Pierre La Roche applied Bowie’s iconic lightning bolt makeup for 1973’s Aladdin Sane album cover photo (although the cover’s photographer Duffy claims that he himself painted the lightning flash on with lipstick). La Roche made up some of Roxy Music’s album cover girls, countless celebrities and the cast of The Rocky Horror Picture Show. Pierre died in the early 1980s.

In the early days, Bowie used makeup tips that he had learned mostly from Lindsay Kemp. During the Ziggy Stardust tour of Japan, premier Kabuki actor Tamasaburo Bando taught him how to apply Japanese style makeup. Bowie’s make-up artist from 1973 was Pierre La Roche from The House of Arden.

La Roche was born Jean-Luis du Cerisier in Algiers. In the 1960s  Pierre moved to France and then London, where he became the star make-up artist at Elizabeth Arden. He left after five years when the company insisted he become more conservative, La Roche freelanced and was contracted by David Bowie and Mick Jagger while he continued to do make-up for British fashion magazines, celebrities and movie stars. Inspired by ancient Arab women who painted their eyes black with khool, a dark eye shadow, La Roche popularized black eye-shadow in the 1960s and also originated the glitter look. Later, he moved to America, to widen his range of male and female clients. Though he worked with celebrities, La Roche was equally interested in designing make-up for the average woman.

The font on the album cover is Cristal, designed by Rémy Peignot in 1953.  On Bowie’s album the lettering is colored with a blue-white-red gradient –  with a flourish – a little flame dotting the “i”. It was among the first set of typefaces printed onto transfer sheets, known as Typophane in 1953. It was later produced as foundry type in 1955. RCA also used the Cristal font on Glenn Miller’s Pure Gold compilation album in 1975. Van Halen used it on the picture sleeve in 1983 for the lead single from their 1984  album ‘Jump’ and also on the album’s cover.

PROCESS
Today, the image of Bowie on his Aladdin Sane album cover would be made using Photoshop, but back in 1973, it was much more complicated.

The print was made using an expensive, high quality seven-colour dye transfer process in Switzerland. The Kodak Dye Transfer Process was created in 1945 and was discontinued in 1993. Long before the print itself is made, the three basic colors are taken apart so that the contrast of each one can be controlled individually; the highlights, mid-tones and shadows can be controlled separately for each color. The black and white color separations made in order to produce a Dye Transfer print are in themselves an archival record of the image. It created stark and also subtle effects, such as two white lines spanning from Bowie’s lips to his nostrils, a nuance suggesting cocaine use. Philip Castle’s iconic airbrush work of a water droplet was supposedly designed to make Bowie look more statuesque.

Upon RCA’s promise of funds for the album artwork, Tony Defries told David to ‘make it expensive’. This afforded them to hire Brian Duffy. From 1957 to 1962 Brian Duffy was Vogue’s in-house fashion photographer. Duffy, David Bailey and Terrence Donovan, comprised the London’s West End set – actors and pop stars who created iconic images and events of the 1960s.

In 1979 Duffy decided to abandon photography. He burned his negatives, and the bulk of his work was lost. Bailey watched him and thought: ‘Great! Less competition!’. It wasn’t an impulsive act: it was quite deliberate…You can’t go back.’ Did it seem brave? ‘No, it was madness. But it was an attitude.’ Luckily, the Aladdin Sane negatives survived this disaster!

In 2005, Duffy offered the original Aladdin Sane artwork for sale, but decided against it. In 2010 he offered very expensive prints of the contact sheets on his web site. Just a few months later, in May 2010, Duffy passed away. Author Kevin Cann procured use of the  contact sheet for the cover of his amazing book Any Day Now – Bowie 1947-1974.

Bowie had coveted Barbara Daly’s work, and had wanted her to do his makeup for the album cover. However, her schedule did not allow it. (Daly later made up Bowie for his 1980 Floor Show TV special, shown only in the USA). Shibayama created the make-up concept for the Aladdin Sane tour.

Bowie admired Elvis Presley’s ring, which had the letters TCB (Taking Care of Business) with a lightning flash. The red and blue flash was adapted from a National Panasonic rice cooker in photographer Duffy’s studio. Duffy suggested putting the flash on Bowie’s face. Pierre La Roche drew a small lightning design on Bowie’s cheek. Duffy hastily drew a large flash across David’s entire face, telling Pierre to ‘fill that in!” The flash was painted on with shiny red lipstick.

Celia Philo was part of Duffy Design Concepts with photographer Brian Duffy, newly established when he was asked to shoot the cover for Bowie’s Aladdin Sane.

Celia Philo: The photos were taken late in the evening & several shots of David Bowie’s torso had been taken as we knew we wanted to create the genie look which was used inside when the make-up artist suggested putting the lightning flash from the bands drum kit across David’s face, and Philip Castle, famous for his artwork for Stanley Kubrick’s film, A Clockwork Orange, was enlisted to create the silver air brushed Aladdin and to put the tear drop resting in the collar bone.

I do remember seeing the first contact sheets of the head & shoulders & realising we had a knock out image on our hands I have lost count of how many times it has been reproduced! And the rest is history. I think it was before one used to see punks walking down the Kings Road with strong statements in face painting…

ALADDIN SANE TOUR
The tour began on 14th February 1973 in the USA, in only ten cities. In April 1973 Bowie toured Japan. The band later returned to the UK on the Trans-Siberia Express.

Two large discs with a red lightning flash were the backdrop for the Ziggy Stardust and Aladdin Sane live gigs. The flashes were painted by future Squeeze member Chris Difford. A large red flash also adorned Woody Woodmansey’s drum kit. The obvious influence was the powerful, infamous Nazi SS symbol, which was later utilized by KISS in their band name logo.

* George H. Chirgwin (1854-1922) was a British music hall star billed as ‘the White-Eyed Kaffir’, a black face minstrel. (Kaffir is a derogatory term for black people). Rather than applying full blackface makeup, Chirgwin adapted his look by painting a large white diamond shape over his right eye. Chirgwin acted in the first Royal Variety Command Performance (1912). His varied musical accomplishments, singing in a falsetto voice and playing a one-string fiddle. His act included cockney material, songs and sketches. n the 1890s, Chirgwin appeared in two non-fiction films. He wrote and acted in a silent drama film called The Blind Boy. A recording was released posthumously on the Edison Bell label on a 78 rpm record. In later life, he was mine host of a pub in Shepperton, Surrey.
(From: 19th Century British Music By Cecil Charles Windsor Aldin) 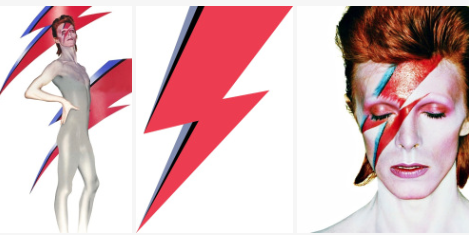 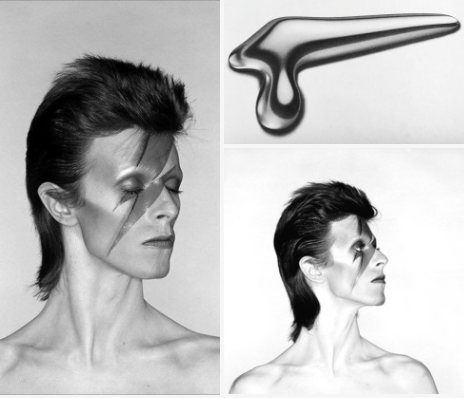 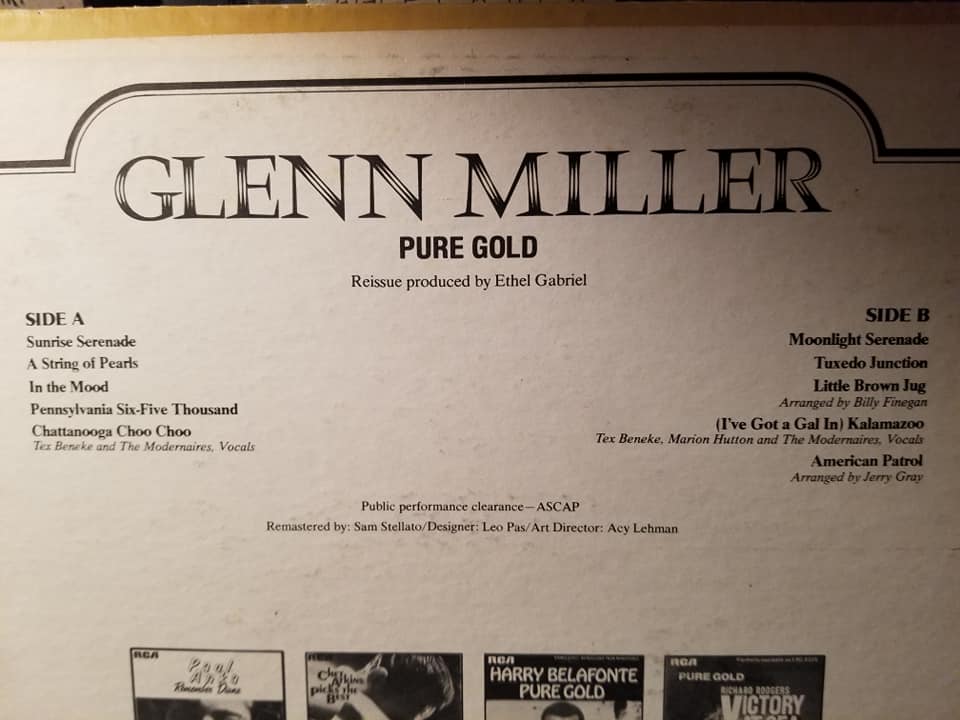