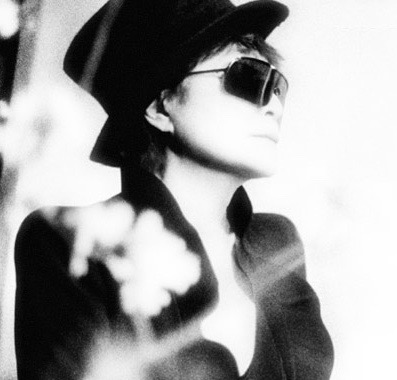 Yoko’s first album in eight years (since Blueprint for a Sunrise, 2001) was released on her son Sean’s record label, Chimera Music.

Sean Ono Lennon had the cool idea to revive the Plastic Ono Band concept for Between My Head and the Sky. Beginning in 1969, Plastic Ono Band. was the standing moniker for the flux of musicians who came and went in the backing band of his parents and on Yoko’s solo albums in the early 1970s. This version of Plastic Ono Band includes two Lennons (Yoko and Sean) with added musicians; Yuka Honda of Cibo Matto (drums and percussion), Yuko Araki (drums), Shahzad Ismaily (Guitars, drums, percussion), Michael Leonhart (trumpet and percussion), Erik Friedlander (cello), Indigo Street (guitar), Daniel Carter (tenor sax and flute) and Cornelius (Keigo Oyamada) on guitars, bass, programming and percussion.

The songs deviate from heavy to light, dark to bright, trippy to serene – sometimes all of these styles and elements converge within one piece. Yoko sings in Japanese on three songs (and on the Japan-only bonus track, ‘Hanako.’

The mind-blowing opening track, ‘Waiting for the D Train’ has a heavy and wild plodding groove )similar to that of ‘Don’t Worry Kyoko’) incorporating the bass line of Yoko’s amazing track ‘Why’ (1970).  D = Death, and Yoko at age 76 knows that we are all waiting for that train. It’s the one that arrives after ‘Mind Train’. So why not sing about it?

“The ‘D’ stands for death, so the thing is you’re waiting for death in a way. And while you’re waiting for death, a lot of things go on in your life. Separations or pain or some beautiful joy, all this stuff happens. And then in the end [of the ‘Between My Head And The Sky’ album is] the song called “Higa Noboru,” which means “The Sun is Rising.” After the D Train, The Sun Is Down. And then the sun is rising, and I’m saying “I’m still alive.” It’s going into the new era, a new age. We’re gonna go to a new age together. That’s what it means.”

Yoko did an amazing duet on this song live with Iggy Pop in 2010 which is available on vinyl:

‘The Sun Is Down!’ is a playful and punchy tune with Yoko dancing in the dark to funky electronic space noises ‘in the secret garden’. Scissor Sisters performed it live at Yoko’s birthday concert in February 2010.  (Read more below).

‘Ask the Elephant!’ evolved from ‘Ask the Dragon’ (Rising 1995) which features a sample from ‘Greenfield Morning’ (from her debut solo album Yoko Ono Plastic Ono Band, 1970). There is a remix of ‘Ask the Dragon’ by Ween on the Rising Mixes EP.

These twin spirit animal songs with their syncopated trip-hop beat have a funky way of telling us to do as animals do. Go with the flow! We should not think so hard about what our instincts are telling us – just do whatever comes naturally, as one of Yoko’s tweets implies…

“You know about the dragon with eight legs.
He was walking very well, until somebody asked him,
‘How do you walk with eight legs?’
Don’t ask questions like that if you like me at all, please!”

The Cibo Matto styled ‘Ask the Elephant’ first appeared on the 2009 Chimera Music Release No. 0 compilation CD alongside tracks by The GOASTT, If By Yes and Sean Lennon. Soon after, it also appeared on Between My Head and the Sky.

On ‘Memory of Footsteps’ Yoko can feel the vibrations of John’s quiet footsteps behind her on the Dakota’s 7th floor, where they lived together. She turns around and they embrace. Although she knows that this precious phantom memory will be ‘swallowed into oblivion by the ruthless ocean called the universe…’ Yoko feels it strongly now ‘with all its might’.

“I’m not conscious of myself as only Japanese. But occasionally I try to communicate on a level with telepathy. I was thinking in terms of kehai vibrations…it’s like the presence of a person behind or around you, although you don’t see them.”

This is her song of thanks to John for ‘being here and now’ and ‘for being you’. The melancholy of a woeful trumpet and keyboard allow the tears to flow. 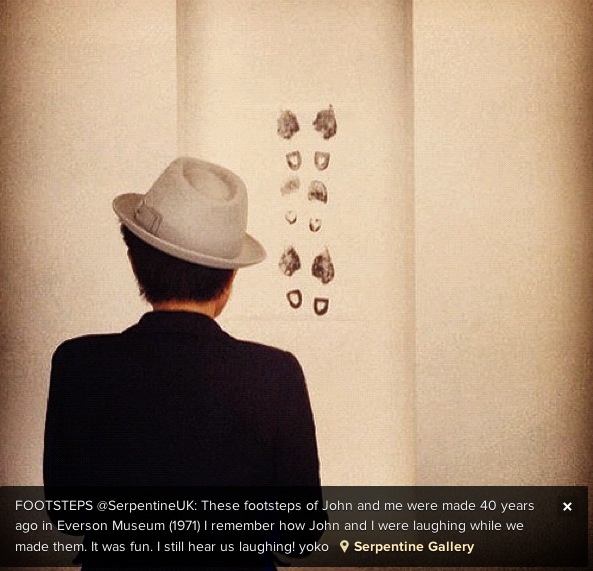 The free-style, levitating ‘Moving Mountains’ has a sacred ceremonial aura. An ancient hollow drum sound and a flute are accompanied by chirping birds and the ocean. Yoko vocalizes as the music ebbs and flows.

Yoko was inspired to write ‘Moving Mountains’ by South American artist Francis Alys who actually achieved this task along with 500 volunteers in Lima, Peru.

‘Calling’ is another glorious undulating free-style piece, about making the best of life. ‘Dream together – touch each other’.

‘Healing’ begins with the ringing of a bell and with Yoko repeating her mantra, ‘Imagine Peace’. She names the places of historic atrocities and reminds us that we are made of water, and that we can heal the world.

Yoko sings in Japanese on the syncopated ‘Hashire Hashire’ featuring a jazzy trumpet.

“Its a crazy, fun and bitter sweet song. One of my best.”

“’Hashire Hashire’ is a beautiful image that came to me. A woman’s husband, he died, and amid all these terrible things that are happening, this woman is saying, “I want to cry, I want to cry, I want to cryeeeee.” The woman is saying, “They took my heart, they cut my breast, and took my…” All sort of things in her body they took away, and there’s nothing left. And to her cat, she says, “You’re always under the desk.” But suddenly she realizes that the cat is not under the desk, then she sees him running away in the horizon. And she’s saying, “Oh, I see you, I see you in the horizon. Well, there’s nothing left, go, go!”
“Hashire, Hashire” means run, run.

On the song ‘Between My Head and the Sky’ Yoko senses something evil in the ‘soul eater’. She keeps him at bay… Imaginary lines, one connected to a thousand universes.

‘Feel The Sand’ celebrates nature. The quiet instrumentation sets the ambience of being outdoors amidst softly blowing wind chimes. Once again, Yoko’s speaking voice reminds us why we are alive – as if conducting a meditation class – asking us to use all our senses fully to experience all that surrounds us so that we can heal, live and give. ‘Your heart is responding to the birds. That’s what we live for… to listen to the sound of the planet’.

On ‘Watching The Rain’ Yoko’s voice echoes out to John’s spirit, again telling him that he will be healed by nature.

‘Un un.To’ is an assimilation of moaning in Japanese. This is one of Yoko’s most delicately beautiful songs – sung in her native language with only piano accompaniment.

Lyrics in the Japan CD booklet:

A tormented memory is groaning

Though it was supposed to have been forgotten

In the darkness of the soul

One sees only in a dream

The tormented memory is still

‘I’m Going Away Smiling’ is a gorgeous tune underlined by the sweet, etherial sounds of a theramin, which pulls at our heartstrings.

‘Higa Noboru’ is a delicate transcendent song, sung in Japanese and in English. Yoko communicates the wisdom divined via her telepathy with nature. I strongly believe that she hears the voices of birds and of fish.

What was the inspiration for the song: “Higa Noboru” on Between My Head and the Sky?

“The rising of the sun I saw during the second world war. Sun rises over dead bodies as well.

“‘Higa Noboru’ means ‘The sun is rising.’ And it starts when the sun is down, and it’s just after you wake up, and you proceed with all the sort of earthly daily things that you go through, and the awareness you draw from it — and then, I’m going away smiling. In the end, the sun bites the dust.”

…This time several of these songs came out in Japanese, and I thought, That’s good, too. I didn’t sort of plan it. You know, I do think there was a point in my life that I was just dreaming in English. And then several years ago I started to go to Japan every year to do this charity concert for Africa, and I started to get more acquainted with the new Japanese, the new Japan, so to speak, and it was really very mind-boggling. And so now I find the Japanese language coming out.”

‘I’m Alive’ consists  simply of brief banging sounds followed by Yoko’s voice saying, “It’s me. I’m alive.” This was re-imagined in 2018 by Yoko on her album of covers, Warzone. She replicates the original version with the hammering sound, adding the question, “Am I?” The banging sounds are similar to those in this piece that Yoko performed with John Cage.

Bonus Track – Only on the Japan release of Betweeen My Head and the Sky:

‘Hanako’ is a beautiful song about a girl, and ‘Ode To Meadow’ is about Sean’s lost dog Merry, who was John’s final Christmas gift to his son. Both versions of the song have Japanese lyrics.

Read my story all about ‘Hanako/Ode To Meadow’ and listen here:

Yoko performed many of the songs from Between My Head and the Sky at her two 77th birthday celebration concerts at Brooklyn Academy of Music over two nights; February 15 & 16, 2010.

This is an excerpt from my Yoko Ono biography
In Your Mind – The Infinite Universe of Yoko Ono
An all-embracing look at Yoko Ono’s life, music and art – in stunning detail. 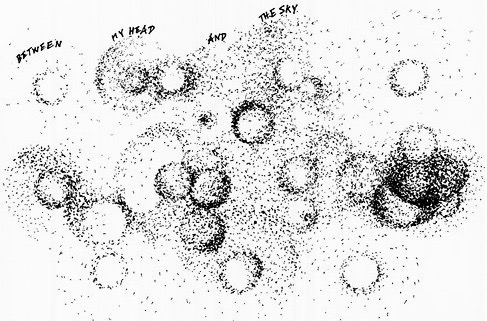 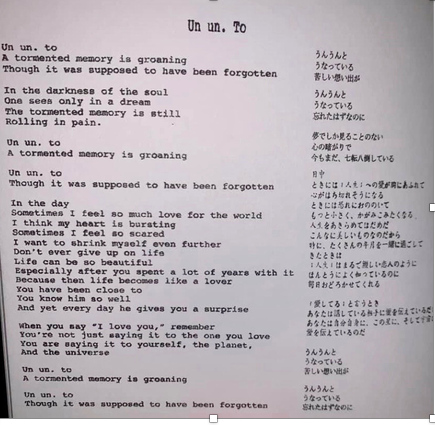 One thought on “Between My Head and the Sky”