My world and the real world have collided. I have my very own private Rock N’ Roll Hall of Fame, and the Stooges are the only band in it. Last night, the Stooges were inducted into that other Rock Hall – the one that everybody thinks is legitimate. Well, maybe now it is!

Of course, after seven nominations and rejections, they waited until guitarist Ron Asheton passed away, depriving him of the honor. But at last the Stooges have finally been recognized. Perhaps it was thanks to that debacle in 2008 (their backing performance of Madonna’s songs at her own induction, upon her invitation). In a way she used them, but yet again, perhaps people took notice.

Ironically, the show opened with Phish doing the ultimate prog-rock song, Genesis’ ‘Watcher of the Skies’ with its monotonous endless keyboard intro.  Eeeek!  Poor Iggy and the guys had to be subjected to this! I could see the wheels turning their heads, thinking ‘Do we really want to be a part of THIS? (the antitheses of everything the Stooges stand for).’

The camera cut to Iggy in the crowd wearing a suit, then to a close-up of Meryl Streep. Does this make any sense at all? Was I watching the right channel? I was squirming throughout the long-winded accolades and detailed glorification of Genesis songs during their induction. Thankfully their acceptance speech was brief. Then Phish performed another Genesis song. How much more of this could I take?

Thankfully, the Stooges were up next. A wonderful historic film montage of the monstrous menagerie’s assault on the music scene was shown. The kid from Green Day read a nice induction speech, with a long litany of bands the Stooges have influenced. Iggy, James and Scott each spoke, acknowledging all the dum dum boys… those no longer with us; Dave Alexander, Zeke Zettner Ron Asheton, and those who are; Billy Cheatham, Jimmy Recca, Scott Thurston, Steve Mackay and Mike Watt. 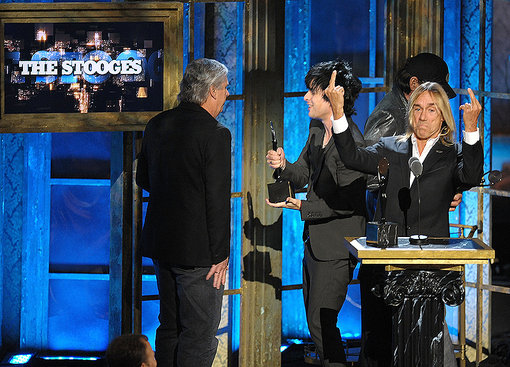 With two uplifted middle fingers to the crowd, Iggy triumphantly uttered, “Roll over Woodstock. We won!” Iggy, showing everyone his note cards, proudly said, “We three are the surviving Stooges.” He mentioned that Ron and Dave would have gotten a big kick out of this, and that Ron was pissed off that it didn’t happen when he was alive. 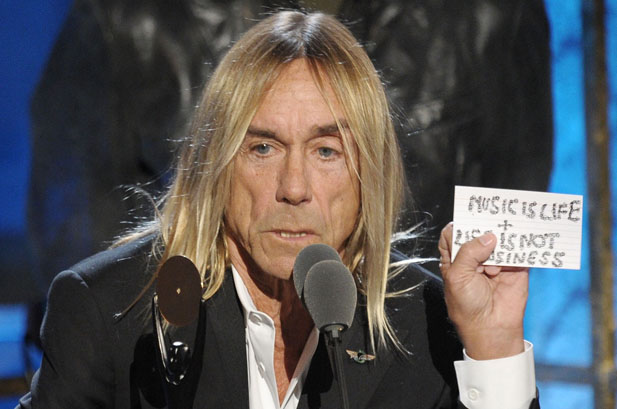 Iggy continued, “So, here we are – in the belly of the beast. There’s a lot of power and money in this room. It’s a big industry. Music is life, and life is not a business.” He gave nods to the MC5, Danny Fields, and “all the poor people who actually started rock n’ roll music” deeming them all ‘cool’. “Music is a big industry. If it makes the right decisions, it will stay an industry,” he warned. He thanked “all Stooge fans, who probably couldn’t afford the $1,200 dinner” at the Waldorf Astoria. Then Iggy choked up and said, “This particular group of friends has had the fortune of having a lovely second act. So thanks.”

James Williamson said, “We were beginning to think we would have to take pride in setting the record for not getting in.”

While Scott Asheton spoke of his brother Ron, “I really miss making music with him, and I probably will for the rest of my life.”

Iggy, the caged animal (you can dress him up, but you can’t contain him!) disrobed on camera, taking little time to find a monkey bar to hang from. He was pumping himself up for the Stooges’ performance, itching to break free.

With their Raw Power guitarist James Williamson, original drummer Scott Asheton, Steve Mackay on sax, Mike Watt on bass and Scott Thurston on keyboards, Iggy – obviously a descendant of Godzilla – stomped around in reverie, performing (from the Stooges’ third and first albums) ‘Search And Destroy’ and ‘I Wanna Be Your Dog’. In the 70s, I thought I was the only person on the planet who loved these songs. How did it come about that everyone else likes them now too? Are they just trying to be cool?

Mackay cranked up his skronking sax during “I Wanna Be Your Dog’, as Iggy stalked and prowled the tuxedoed audience.

This is my favorite situation; when Iggy is unleashed to terrorize bewildered celebrities. Iggy recently said, “I’m at the time of life where people sort of pick me up by the collar and exhibit me on various occasions.”

There was nobody recognizable up front. Bruce Springsteen was probably hiding under a table. The only famous person visible was Dr. Oz, who actually seemed quite impressed.

Iggy invited a stage invasion during ‘Dog’, as he usually does at live gigs (“Let’s see some rich people up here…let’s see some jewelry up here! Come on, you’re not too rich to be cool!”). It was quite a poor showing – only about 10 guys ran onstage (where was Meryl Streep?!) Not like the hordes who rushed the stage at Glastonbury in 2007 – a crowd so big that it created a nice subterfuge for the person who skillfully absconded with Ron Asheton’s guitar!

Iggy – who personifies Moe, Larry, and Curly all in one – did his infamous chicken dance, and it was all over.

Asked backstage if he has donated any memorabilia to the institution that was honoring him, Iggy replied, “I told them where to buy all the stuff I sold for drugs in the ’70s.”

I actually watched the entire debacle to see my girl Ronnie Spector, and to witness a Bee and a Gee (2 of the Bee Gees) induct ABBA. One A and one B (Anni-Frid and Benny) were there to accept. The other B and A (Bjorn and Agnetha) were absent, as usual. Anni-Frid, looking as pretty as ever, gave a touching speech, proudly thanking her grandson who was present, a 15 year old covered in tattoos. “He likes ABBA even though he plays in a heavy metal band.” Cute. Benny gave a lovely speech about the lack of radio stations in Sweden in the 50s. They mostly heard cheery European folk songs, and that’s why ABBA mostly lacks a blues feel, yet the songs still have poignant moments. He defined the blues of Sweden as something more like melancholy. “You can see in Greta Garbo’s eyes, or in the films of Ingmar Bergman.”

Benny then went to the piano, possessed by the trills of Rachmaninoff, as Faith Hill attempted to sing ‘The Winner Takes It All’. It was an obvious struggle, with agony written on her face as Faith attempted to sustain and reach the same notes that songbird Agnetha so effortlessly let fly. It was a valiant try, but nowhere near the enchanting, crisp sound of ABBA’s supernatural voices. The ABBA girls are untouchable when harmonizing, like the twin fairies who speak in simultaneous sing-song as the interpretive voice of Godzilla’s rival, Mothra. That’s when their harmonies become magical, like pixies tickling your ears with aural fairy dust. Granted, it was done with tape speed manipulation, but who cares!

Carole King spoke about the songwriters of the Brill building in the 1960s. 2010 Rock N’ Roll Hall of Fame wards were given to many of them; Goffin/King, Weil/Mann, Schuman/Pomus, Greenwich/Barry, etc…Ronnie Spector sang ‘Be My Baby’. She’s looked better and she’s looked worse – a bit off key but her ‘woah oh oh oh oh’s ‘were amazing. At the end of the song, she thanked… Ellen DeGeneres INSTEAD of the late, great Ellie Greenwich! Hey Ronnie! Is senility setting in, or have you been watching too much of American Idol! I’m really worried about you!! She immediately corrected herself, saying, “Sorry for that mix up!”

The evening degenerated into yet another embarrassing all-star jam, when everyone attempted to sing the infamous ‘Shake, Rattle and Roll”, not taking into account that nobody knows, nor bothered to rehearse the verses! Everyone looked foolish, not knowing what to do until the chorus.

Oh well, at least the Stooges are in now, for what it’s worth!

3 thoughts on “THE STOOGES: Rock N’ Roll Hall of Fame Induction – 10 Years Ago”