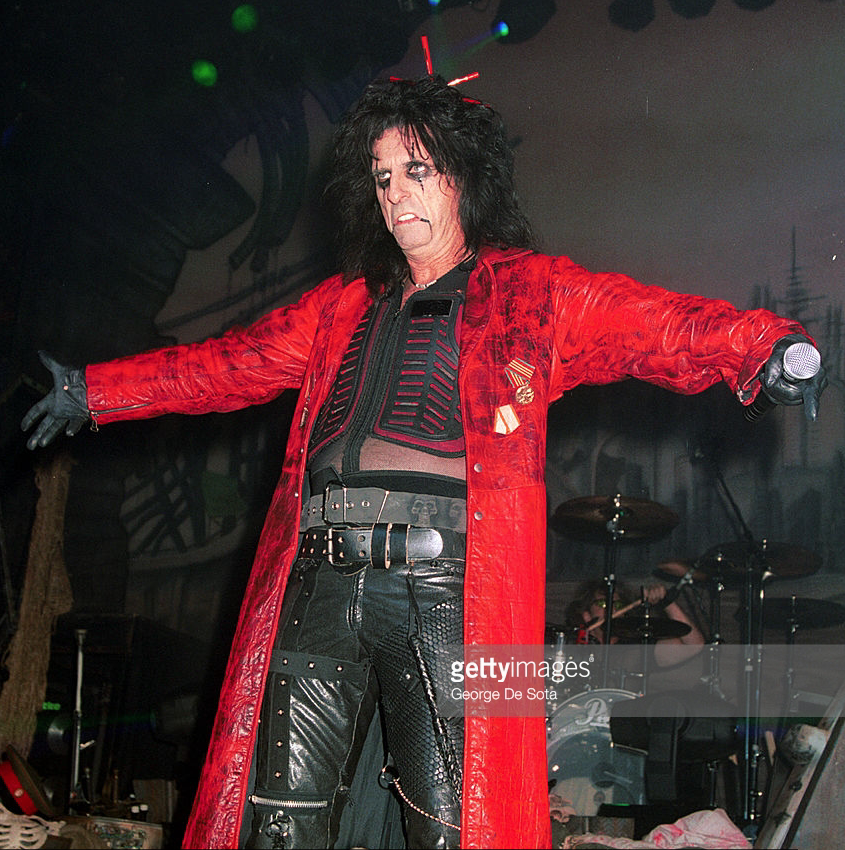 Ladies and gentlemen! Children of all ages! Step right up! See Alice Sing and Dance! See Alice Committed and Strait-jacketed! See Alice Beheaded! See Alice Reanimated! The side-show and the main event are both rolled up into one great spectacular evening of theatrics, mayhem and rock n’ roll!

Alice Cooper was one of the first rock stars to present a full-blown theatrical stage act. (Wisely, he never relied on his looks to sell records!) Had the original Alice Cooper Group not been so clever, and had the songs not been so well crafted, the stage spectacle would not have transcended time as favourably as it has. Of course a little comedy thrown in for good measure didn’t hurt! Most folks take all this fright and horror stuff quite seriously, but Alice brings his own special brand of burlesque to the genre. The guillotine is to Alice Cooper what Henny Youngman’s violin was to his one-liner act. Take my life – please!

He opens with some new songs; most entertaining was the “Batman” themed “Wicked Young Man” mocking today’s young whippersnappers who perpetrate the violence they see in the media. “I’ve got a pocket full of bullets, a blueprint of the school, I’m the devil’s little soldier, the devil’s little tool”. “Pick Up The Bones”, a song about collecting the bones of his family in an old pillow case was a bit disturbing until Alice clumsily gathered skeleton parts into a bloody pillow case with extreme lack of finesse!

“The Ballad of Dwight Fry” was brilliant as usual – Houdini would have been proud – but “Steven” was sorely missing from the set. During “Feed My Frankenstein”, Alice gathers severed body parts and assembles them in a smoke-filled chamber while walking his demented Frankenstein walk. The guillotine rolls out during an abbreviated “I Love The Dead”, and Alice is beheaded way too early – only forty five minutes into the performance. This is silly because he commits far worse crimes worthy of decapitation in the second half! This year’s rubber Alice head wasn’t as detailed as past ones which had guts dangling from the neck and spit blood. So much for the gory details.

The ravaged nurse (Dwight Fry had turned the hypodermic needle on her earlier) retrieves The Coop’s bloody head and places it atop the pre-assembled body parts in Frankenstein’s chamber, where Alice becomes reanimated. He bursts out in a clean white suit for “No More Mr. Nice Guy”, and it’s a stream of old hits from then on.

The band (Guns N’ Roses wannabe’s) were too young to evoke the character of the older songs, but they fit right in on the new material. We could have done without a drum solo, but I guess it was necessary for Alice’s final costume change – essential for all great rock divas. An encore of the Who’s “My Generation” was highly irrelevant and unnecessary, but let’s forgive Alice, for he is the man who chased people dressed as teeth with a giant toothbrush during “Unfinished Sweet” on the Billion Dollar Babies tour!