© Madeline Bocaro, 2002/2019. No part of this site may be reproduced or reblogged in whole or in part in any manner without the permission of the copyright owner.

This pair of beautiful songs are from the 1980 Double Fantasy album sessions – a dialogue of songs between John and Yoko.

They appeared on the album Milk and Honey which Yoko released in January 1984, three years after John’s death. In this couplet of songs, John and Yoko declare their eternal love, intending a long life together. Sadly, their future was destroyed in an instant, just after the songs were written. In fact, although their story seems to be infinite, they only had less than twelve years together.

‘Grow Old With Me’ was John’s unfinished piano / drum machine cassette demo – one of the last songs that he ever recorded.

Both songs are inspired by poems by the Victorian poets Elizabeth Barrett Browning and Robert Browning. In her Milk and Honey liner notes, Yoko relates that she and John believed that they might have been the reincarnation of Barrett and Browning. The Milk and Honey album jacket includes verses by the Brownings printed next to lyrics by John and Yoko.

“On December 25, ’80, I discovered that I received a Christmas present from John which he had bought and had it held as a surprise for me. It was a portrait and an original handwriting of Robert and Elizabeth Browning framed side by side.”

GROW OLD WITH ME

One early morning in the summer of 1980, I woke up with “Let Me Count The Ways” ringing in my head. I called John who was then in Bermuda and played it over the phone. “How d’you like it?” “I really like it. It’s beautiful”. “How about you writing one with a Robert Browning line and we’ll have portraits of us as Elizabeth and Robert on the cover?”

(This needs a little explaining. John and I always thought, among many other things, that we were maybe the reincarnation of Robert and Liz. So he immediately knew what I was talking about).

We discussed then about Double Fantasy cover that it should be two portraits, one of Elizabeth and the other of Robert, only the faces would be ours. John thought we should look very prim and proper with just our hands coming out of the paintings and holding in the middle, the funny touch. We both laughed. “Okay then, just tell downstairs (our office) to send me the collection of Robert Browning and let’s see what happens”. It wasn’t necessary, however, to send the collection to Bermuda.

John called me that afternoon “Hey, you won’t believe this!” He explained that he was watching the TV, a fifties film of a baseball player. In the film, John saw the girlfriend send a poem to her baseball player, a poem which was one by Robert Browning called “Grow Old Beside Me”. “Can you believe that?….so anyways, this is my version”. John proudly played his song over the phone. That’s how our two songs happened.

To us, these two songs were the backbone of Double Fantasy, and we kept discussing how we would arrange them. For John, “Grow Old With Me” was one that would be a standard, the kind that they would play in church every time a couple gets married. It was horns and symphony time. But we were working against deadline for the Christmas release of the album, kept holding “Grow Old With Me” to the end, and finally decided it was better to leave the song for “Milk and Honey” so we won’t do a rush job.

Ringo Starr has collaborated with Paul McCartney on a version of ‘Grow Old With Me’ for his new album, What’s My Name (October 2019). Ringo was unaware of the demo recording which was among other unfinished recordings of John’s (‘Free as a Bird’ and ‘Real Love’) given by Yoko Ono to be completed by Paul, George and Ringo for The Beatles Anthology project in 1995.

Double Fantasy producer Jack Douglas recently made Ringo aware of the cassette. After Ringo heard a personal message to himself from John on the demo tape, he decided to include the song on his album. Ringo told the BBC, “It says on the beginning ‘This will be great for you, Ringo.’ And so I said ‘I’m going to do the track.’” He recruited Paul to play bass and said of John, “He’d have loved it.”

“The idea that John was talking about me in that time before he died, well, I’m an emotional person. And I just loved this song. I sang it the best that I could. I do well up when I think of John this deeply. And I’ve done my best. We’ve done our best.”

He added: “The other good thing is that I really wanted Paul to play on it… Paul came over and he played bass and sings a little bit on this with me. So, John’s on it in a way. I’m on it and Paul’s on it.”

An embellished orchestral version of ‘Grow Old With Me’ produced by George Martin  appears on the 1998 John Lennon Anthology box.

Grow Old With Me

‘Let Me Count The Ways’ is Yoko’s answer to John’s ‘Grow Old With Me’.

In each lyrical phrase, Yoko, in gratitude illustrates and compares the way that she loves, misses, sees and touches John with imagery from nature (in the same touching way that John describes Yoko and and his mother in his song ‘Julia’). She relates John’s spirit to invisible or ethereal, yet familiar things that we can clearly imagine.

Although Yoko wrote the song when he was alive, it’s almost as if she wrote the it after John’s passing, as he seems just out of reach. Yoko implements animism – inserting John’s soul into all these delicate, intangible and timeless elements as if she knew that he would remain with her forever.

A gentle wind at dawn, the first sun that hits the dew

That lake in the mountain you heard about

The air around me that holds me gently

The first snow I made my wishes to

The moonlight that covers the world…

The 1992 Onobox 3:05 extended version includes the most beautiful verse.

Listen to the song here, with a sweet photo montage:

Yoko tells the story of John & Yoko’s wishing bell at Dream Power Japan 2008 Translation of Yoko’s touching introduction:
“He told me that he loves me every day.
But I was shy and only said, “Yes, thank you very much.”
So, he was very happy to hear “let me count the ways” and he said, “You finally said I love you.”
And he made the answer song “Grow Old With Me ” for me. And now I wanted to tell him more “I Love You.” 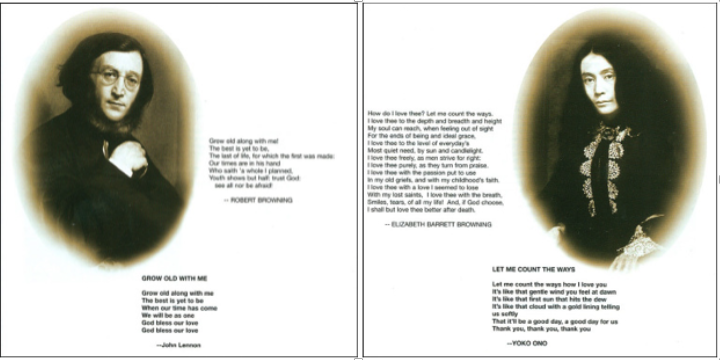 ‘Let Me Count The Ways’ was later remixed by San Francisco indie band Beulah (who, in 2003 titled their 4th album Yoko). The intro sounds like the start of the Sid Vicious version of “My Way”!

(Beulah singer Miles Kurosky: “Yoko had to be the title since the record is about love, my growth as an artist, and the changes I’ve been going through as a human being. I wanted to make a more mature, confident and daring artistic statement. The word ‘Yoko’ says it all: change, progress and risk.”) 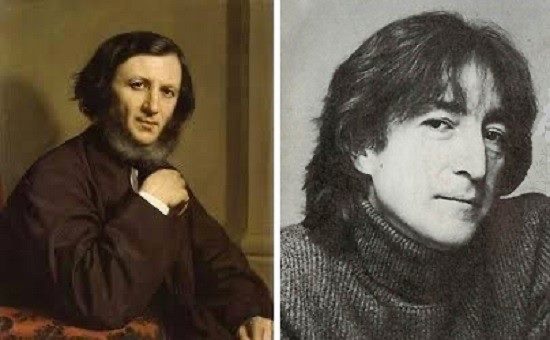 Let me count the ways how you touch me

It’s like that misty rain that warms my heart

It’s like that first snow I made my wishes to

Tellng me kindly, to have a good sleep

Have a good sleep tonight

The 43rd sonnet of Sonnets from the Portuguese

Grow old along with me!
The best is yet to be,
The last of life, for which the first was made:
Our times are in His hand
Who saith “A whole I planned,
Youth shows but half; trust God: see all, nor be afraid! 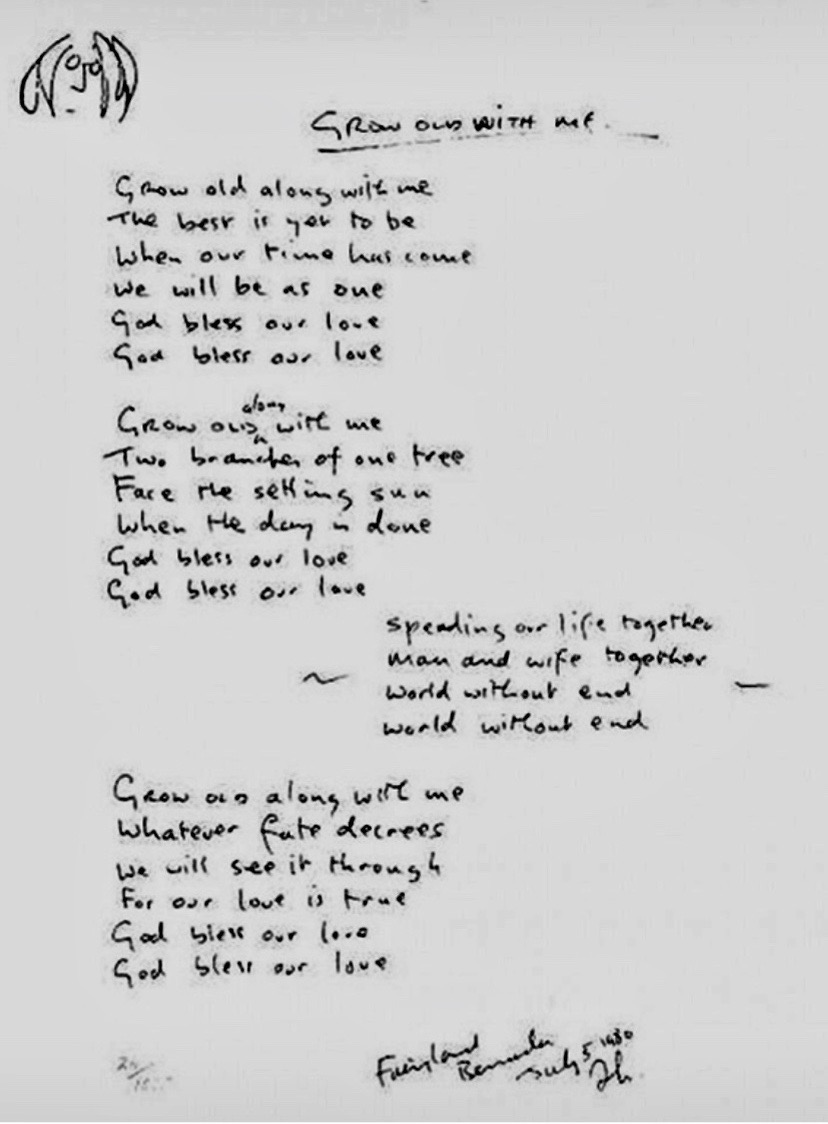 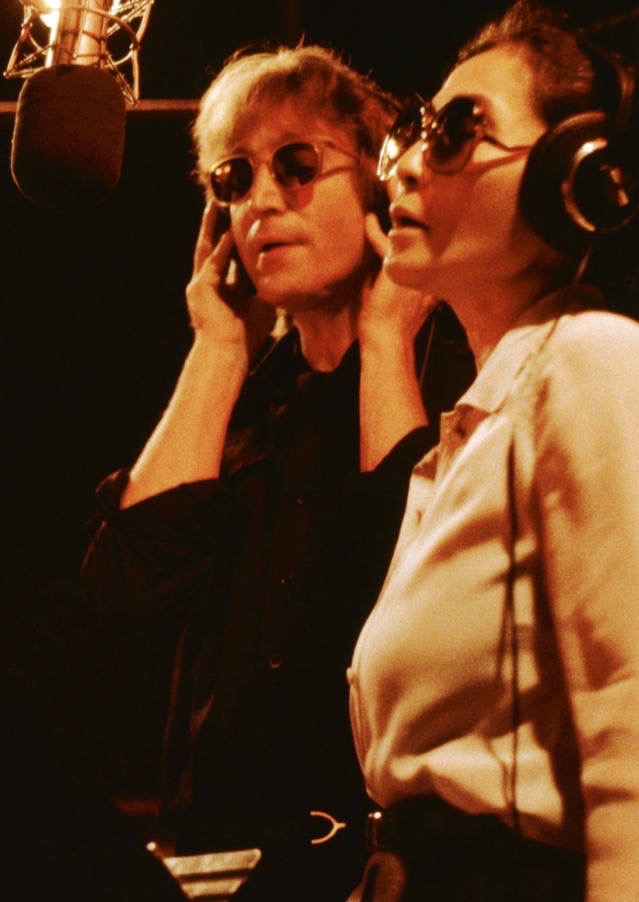 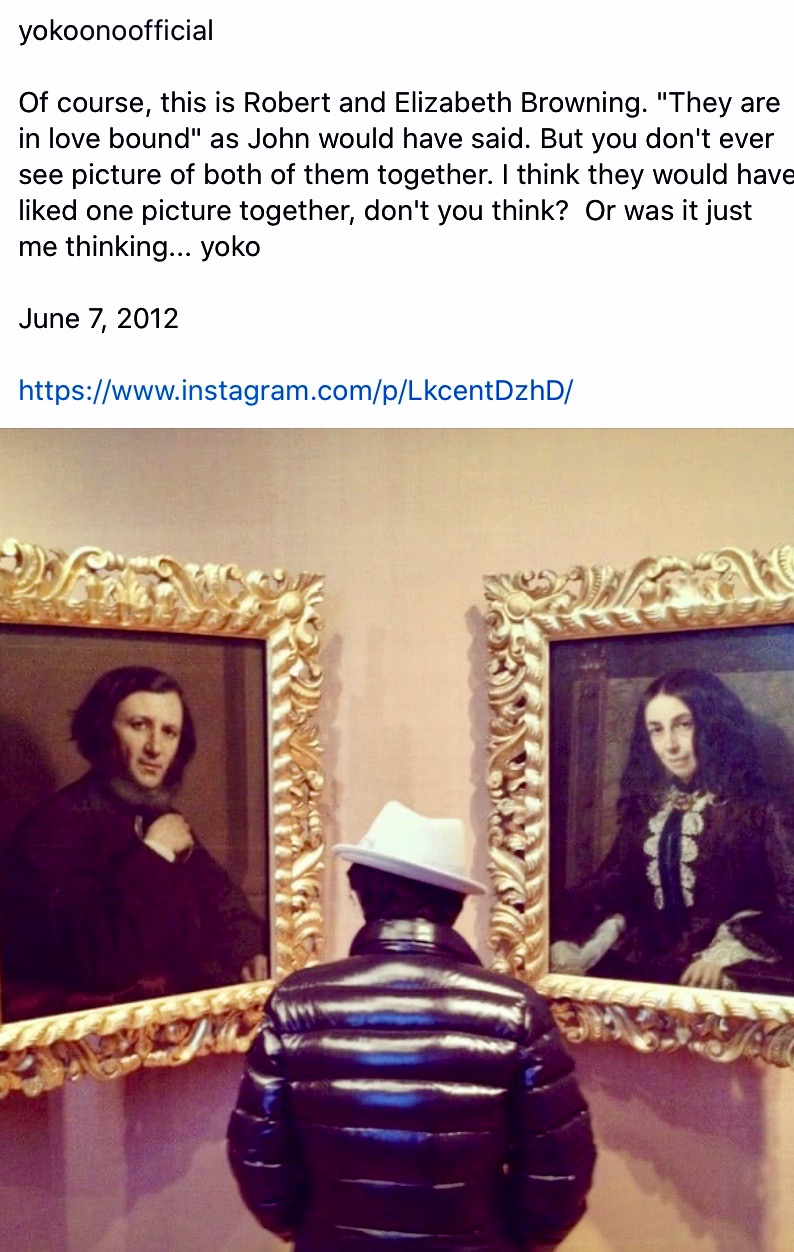