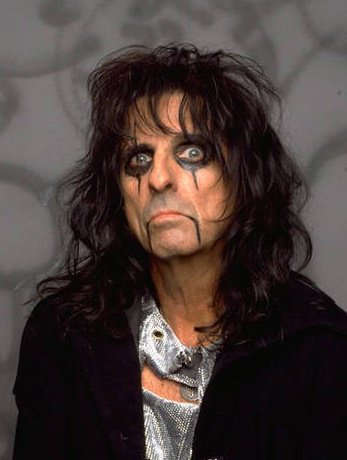 Remember the days when Alice Cooper was practically the only female name in rock n’ roll? In these days of dreadful divas and, bratty teen idols, Alice is still the greatest of them all!

Dragontown is an oriental nightmare. It looked like Alice had robbed every major prop house in Hollywood to compose the stage set. There were gigantic Noh masks, gargoyles, spears, hanged skeletons, mutilated dolls, ancient implements of torture…the usual fare. Video projections of Chinese writing were also quite effective. With his long coat emblazoned with the Chinese characters for ‘strength’ Alice wore chopsticks in his hair with a long braid at the back – posing like a psycho samurai.

Lots of hits, including “Billion Dollar Babies” came early in the set, and continued throughout. On “Go To Hell”, Alice played a pair of black maracas – perhaps in tribute to the recent surge in popularity of Latin music? Nah, I don’t think so!

The considerate Mr. Cooper feels a bit uncomfortable singing his anthem “I’m Eighteen” at age 54, so he does it with a crutch in hand. But he is not too mature to play air guitar with it!

The only other sign of Alice’s ‘maturity’ was when his head was bent over the guillotine in preparation for his millionth beheading. Could it be…yes, it was a bald spot! The stylistic, new-and-improved guillotine was topped by a gothic pagoda. The executioner was a bit too jovial this time around. Unlike the usual more severe, hooded figure, this guy was dancing around with Alice’s rubber head in sheer mockery. The head itself was not as striking as previous heads, (in fact, it inaccurately had a tan!) which had more glistening guts spilling out of the neck, and spat blood.

“Steven” “Dead Babies” and “Ballad of Dwight Fry” were done in a sort of mixed medley. Although these standards should not be abbreviated, we were treated to the traditional Nurse vs. Alice routine in which he always wins. The nurse is potrayed by Cooper’s daughter whom he abuses to no end, and introduces as, “My own little nightmare.” We also heard “Cold Ethyl” “Welcome To My Nightmare” and snippets of “Black Widow”.

“Lost In America” replaced “Elected” this time, and “Vicious Young Man” from Brutal Planet rocked the house. The band was very young (half the age of most audience members) and very loud, which added to the fun.

The ‘nurse’ reattached Alice’s head to the body in the Frankenstein chamber. He emerged re-animated in his white tux and tails (a little spot of blood on the pants, of course) for “School’s Out” and another string of hits, shocking us with “Is It My Body?” and closing with “Under My Wheels”.

Just as we wondered what he would do for an encore, he unearthed Muscle of Love’s “Department of Youth”! Britney Spears (Ms. Cooper) appeared for a little dance, handing Alice a Pepsi, which he promptly spat out in her face. He chased ‘Britney’ with a huge spear (get the pun?), eventually beheading her to everyone’s delight, and triumphantly displaying her severed head with fiendish glee.