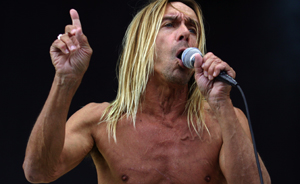 The Stooge machine is switched on, all the amps are cranked up to eleven, and the auditory assault begins. Once the Stooges get going, it sounds like the fight scene in Godzilla vs. Mothra repeating on a two-hour loop. We, the audience are the terrorized little people of Tokyo, knowing instinctively that we should run away, but we can’t take our unblinking eyes off the astounding spectacle onstage. The translated subtitles in word-bubbles above our heads read, ‘WOW!’ ‘HOLY CRAP!’ ‘WHAT THE F…?!’

Iggy and the surviving Stooges prevail. They defy evolution, yet they survive and persevere thanks to their primal instincts. Last week, their equipment was stolen in Canada, leading us to wonder if the reunited Sex Pistols had been in town at the time. If so, this would have been the biggest heist for Steve Jones to date (second only to Bowie’s Spiders From Mars equipment which he made off with in the 70s!). Garbage cans and kazoos would have sufficed, but quickly rented equipment was set up and ready for the Stooges in New York City.

Iggy remains free from the constraints of convention, corruption and clothing. We catch a glimpse of his saggy old butt. He bursts out of the gate with ‘Loose’ looking sublime with blonde streaked hair (imagine him sitting in the salon with foil wraps on his head, getting his highlights done!) He is tanned, lithe and wild. Within minutes, he’s drenching himself in water, climbing the Marshall stacks and diving into the crowd, barking and morphing into The Legendary Wild Creature.

He stomps like King Kong – not the Kong who terrorizes New York City, but the primal beast who rules Skull Island, the earth shaking beneath his feet, where dinosaurs fear him and humans cower in terror and in reverence. Somehow, this small, 61 year old guy with a limp from a leg injury can still pull this off. Why? Because he’s NOT KIDDING!

Bodies fly onto and off of the stage. Iggy dives off, moshers dive on, people are upside down, pushing and shoving – it’s brutal. BUT…the ideal stance at a Stooges gig is to remain completely still and let the deafening psychedelic buzz / drone vibrate through your body and jiggle you around like a blob of Jell-O while your throbbing brain does the Stooge groove.

During “No Fun” Iggy sings the immortal lines, “C’mon Ronnie, lemme hear you tell ’em how I feel!” Ron Asheton told us 40 years ago on the record, and he’s here telling us again now, cranking out the scientifically formulated noise that only he can create. It’s a blessing to also have his brother Scott here on drums! Mike Watt is an animal on bass. Iggy invites the crowd onstage, and hundreds r.s.v.p. He leaves them up there, joining us down front, drenching us in bottled water and sharing a drink. Oddly, there are no edible missiles, or smeared condiments in sight this time around (it is legendary that 70s Stooges fans brought their own arsenals). We got through ‘1969’ and ‘1970’ completely food free! ‘TV Eye’ and ‘Real Cool Time’ preceded a few tunes from Iggy’s Skull Ring album.

Steve MacKay appears on shrieking sax for ‘Fun House’ (the blues jam like no other). The ruckus he creates resembles the deafening collective cries of the Earth monsters upon the arrival of giant mutant three-headed lizard King Ghidorah in Destroy All Monsters (also the namesake of Ron Asheton’s former band).

They venture into Raw Power territory this time including ‘Search And Destroy’. Asheton pulverizes Williamson’s guitar bits and boils them into the current Stooges stew. Appropriately, the name of the venue included the word ‘Terminal’. This could be fatal.  Another feral howl begins ‘I Wanna Be Your Dog’ for the second time. They’ve been playing this song twice in their set ever since they reunited, because it’s so great that it needs to be played twice! ‘I’m Fried’ from the Stooges’ latest album, The Weirdness closed the show.

I scooped up my brain from the floor, tucked it under my arm and went home to scoff at my entire music collection in disgust, deeming none of it as worthy as the Stooges LIVE! Serious fun!