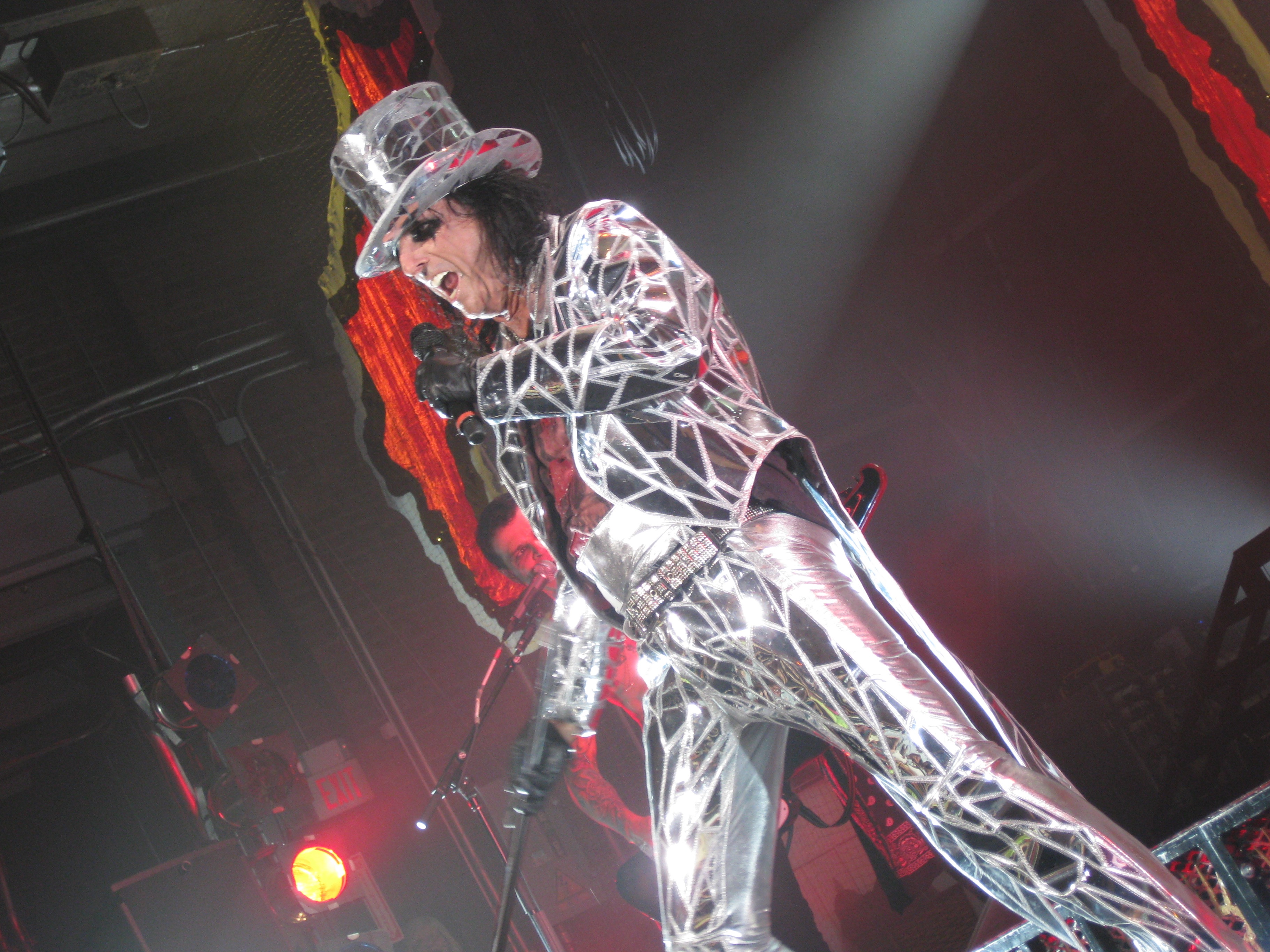 It was the perfect way to spend Halloween Eve. The lobby was filled with Alice clones of all kinds; young and old (mostly old), wheelchair-bound Alices, morbidly obese Alices, balding Alices, Alice in a yarmulke… An Alice wrapped in a snake and another with several bloody dolls hanging from his coat broke into an impromptu duet of ‘I Love The Dead’ as people snapped photos. Alice’s daughter Cali walked by without even blinking. This is an every day occurrence for her!

From the minute the curtain rose, the hits kept coming and the blood kept spurting. The first half was the rock show; ‘It’s Hot Tonight’, ‘No More Mr. Nice Guy’, ‘Be My Lover’, ‘Under My Wheels, ‘Is It My Body’, ‘Feed My Frankenstein’, ‘Lost In America’ and much more. The considerate Mr. Cooper felt a bit uncomfortable singing his anthem ‘I’m Eighteen’ when he should be singing “I’m Sixty!” so he did it with a crutch in hand. But he is not too mature to play air guitar with it! The only other sign of Alice’s ‘maturity’ was when his head was bent down as he writhed to release himself from his millionth strait-jacket Could it be…??? Yes, it was a bald spot!

In these days of dreadful divas and, bratty teen idols, Alice Cooper is still the greatest female name in rock n’ roll! It seemed like Alice had robbed every prop house in Hollywood to fill his trash can arsenal of weaponry and implements of torture. He was always wielding something; a baton, a whip, or a sword on which he shared skewered ‘Billion Dollar Babies’ hundred dollar bills bearing his image with the crowd.

The lengthy drum solo signaled the start of the show’s second half. It’s always tortuous, yet it is an absolutely necessary evil to make time for the costume changes and backstage preparations for the nightmare to come. The smoke billows, the stormy night ensues, and ‘Welcome To My Nightmare’ segues into ‘Cold Ethyl’, then ‘Only Women Bleed’. Cali is Alice’s beaten, bruised and bloodied victim, and she has heightened her performance by combining modern dance with a highly evocative twitching, convulsing ballet. It really is quite beautiful.

The baby carriage is wheeled out for ‘Dead Babies’ and the suspense builds until the end of the song, when Alice reveals what mutant monstrosity is in there this time. He takes out a seemingly normal looking baby doll, and taunts us before turning it around to face us. It’s wearing Alice makeup, and vampire fangs. (Not as cool as the two-headed wolfman baby of 2006, but a refreshing change nonetheless). This time, after placing the baby back in the carriage, he hammers a stake through its heart. The mother (Cali) returns to assault Alice, and the usual mayhem ensues.

The sublime ‘Steven’ and ‘Ballad of Dwight’ Fry are the highlight of the evening. The guillotine gets a respite on this tour, and the hanging is reinstated as the method of execution. Alice himself says the hanging is in fact more dangerous to perform. However, I really missed seeing the ever-evolving severed Alice head, which is revised each year. Last year’s rubber Alice head was not as striking as previous ones, (in fact, it inaccurately had a tan) but it had more glistening guts spilling out of the neck, and it spat blood at a much further trajectory. The hanging was much less of a mess, yet it was quite impressive when the colossal gallows were wheeled onstage, and the floor was pulled from under Alice to the tune of ‘I Love The Dead’.

Alice was one of the first rock stars to present a full-blown theatrical stage act. (Wisely, he never relied on his looks to sell records!) Had the original Alice Cooper Group not been so clever, and had the songs not been so well crafted and produced, the stage spectacle would not have transcended time as favourably as it has. Of course a little comedy thrown in for good measure didn’t hurt! Most folks take all this fright and horror stuff quite seriously, but Alice brings his own special brand of burlesque to the genre. The guillotine is to Alice Cooper what Henny Youngman’s violin was to his one-liner act. Take my life – please!

The bloodied white tails and top hat return for ‘School’s Out’. Then, the inevitable; on the verge of election day, we were treated to the old standard tune ‘Elected’. Obama and McCain duke it out onstage while Alice and Bush cheer them on atop the drum riser. Nobody wins – Alice is ‘an equal opportunity satirist’.

Only two songs were performed from his incredible new release Along Came A Spider. Hopefully, Alice will soon construct a stage show solely for this wonderfully creepy album!