Well, I did it. Just before I left the house, I read this tweeted wisdom from Yoko Ono!

Problem? Start with feeling love for the problem. You will then know what step you wish to take.

My problem of having a 7th row seat was solved with this guidance. I learned to love the problem because it means that Iggy is so successful now that it’s nearly impossible to get a ticket. I made the challenge fun, as it used to be instead of being grumpy and mad. Thank you Yoko!!! So with great ingenuity (inherited from Lucy & Ethel), I made my surge forward. After some environmental evaluation, calculation and perfect timing, I ended up in front, when just as I anticipated, Iggy burst onstage with ‘Lust For Life’, and all hell broke loose. So great to be in his sublime presence again!!!

‘Sister Midnight’ was stunning. Suddenly, by total surprise, after casually walking toward the back of the stage, Iggy ran to the front and leapt into the crowd. Luckily, not on top of me!

He entered the crowd several more times, asking, ‘Hey! Mind if I drop in?’ and falling backwards onto our outstretched hands. Iggy decided to sing ‘Fall In Love With Me’ amongst the crowd, but they instinctually pushed him forward, returning him to the stage a few times, as he protested, “Hey let me go! I wanna be IN THE HOUSE!”

There was lots of triumphant King Kong chest pounding, monkey scratching, frog hopping and his usual array of hilariously silly moves. We love him so much that when someone started hurling pieces of fruit onto the stage including two mushy bananas, fans quickly grabbed them and cleaned up the slimy mess with their jackets so that Iggy would not slip and fall! It brought fond memories of all the edible arsenals hurled at the Stooges. (There was no peanut butter.)

The new songs sound better live. But I’m not convinced that this assemblage of band members from Queens Of The Stone Age is his best yet. How can they possibly be, when I’ve seen Iggy with (aside from the sublime Stooges) the Sales brothers & Bowie, Clem Burke, Douggie Bowne, Ivan Kral, Carlos Alomar, (ex-Pistols) Steve Jones and Glen Matlock, Rob DuPrey, Gary Valentine, Frank Infante, Andy McCoy, Whitey Kirst, Kevin Armstrong and many others who whipped up a much bigger frenzy around Iggy’s antics.

Almost all of the new songs from PPD were included, but my favorites were the old classics, ‘Mass Production’, ‘Sixteen’, ‘Baby’ and ‘Tonight’ – he did the ‘I saw my baby
/ She was turning blue…’ intro!! Homme’s elongated guitar ending of ‘China Girl’ was obnoxious, but I guess Iggy needed to cool down backstage. He introduced ‘German Days,’ as “a robotic, tectonic number with European and Slavic undertones.”

On my train ride to the show, past Mets stadium, hundreds of fools wearing baseball hats backwards with the lovely adjustable strap across their foreheads guzzled their last drop of beer from bagged bottles before having to ditch it in the trash. The sight of it all made me sad and ill… That’s when I wanted ‘SOME WEIRD SIN’! And thank god Iggy played it!

Iggy looks infinitely better in person than in those awful photos with shadows that highlight all kinds of craters and scales on his skin. He’s still all muscle, small and lean with shiny blonde hair. In his serious moments he resembles a beautiful, noble Indian chief. Then, in a split second he becomes a complete goofball!

Two hours later, after an 8-song encore. Iggy thanked us many times sincerely, touching everyone’s hands. In the past, he would berate obnoxious people who got him riled up, with hilarious insulting banter worthy of Don Rickles – completely shaming his hecklers, but now there is no reason for this – everyone loves him.

What else is Iggy ever going to do besides THIS if he retires now?! He’s still so passionate and sincere – full of energy although a bit clumsier. Iggy is still the 8th wonder of the world for me. And he still feels like a reptile!

He aptly closed with ‘Success’ with more chest beating and caressing of his own torso while yelling, ‘Me, me me!!!’ He also kept saying, “I need this!! I need you!!”

This photo looks like the parting of the Red Sea & the crucifixion,

all happening at once! 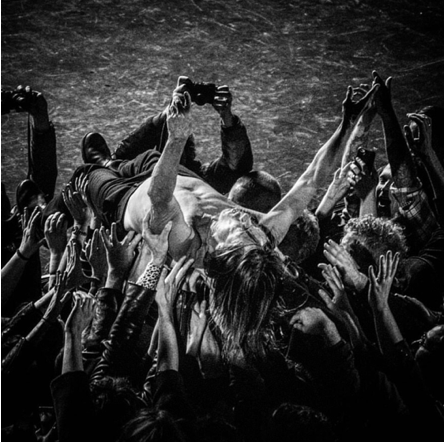 My purse fell down a crevice in the stage to the floor below. Security led me downstairs to pick it up in the office, which was in the backstage area! The guy couldn’t find the keys, so he stupidly left me waiting there. Of course I wandered off and found Iggy! He saw me and said, “You were great!” I replied, No – YOU were great!” Unfortunately my phone was locked in that office or I would have had my umteenth photo taken with Iggy. But who cares – I got to say goodbye to him, if this is really the last time.

As it was a thrilling evening, my rage and bitterness subsided at the hordes of people attending who were not even born yet when I had already seen 100 Iggy shows (when everybody hated him). Now it is wonderful that so many people are witnessing him  – as long as they’re not in my way – and seeing a REAL rock star! They will definitely be telling their grandchildren about it!