In 1967, a young Japanese artist turned the film world upside down with her strange movie.  After making several short films and as part of the Fluxus movement, Yoko Ono had yet another brilliant idea. Her script read, ‘String bottoms together in place of signatures for petition for peace.’
Ono had also envisioned her film’s future…
“In 50 years or so, which is like 10 centuries from now, people will look at the film of the 60’s. They will probably comment on Ingmar Bergman as meaningfully meaningful film-maker Jean-Luc Godard as the meaningfully meaningless. Antonioni as meaninglessly meaningful, etc, etc. Then they would come to the No. 4 film and see a sudden swarm of exposed bottoms that these bottoms, in fact belonged to people who represented the London scene. And I hope that they would see that the 60’s was not only the age of achievements, but of laughter. This film, in fact, is like an aimless petition signed by people with their anuses. Next time we wish to make an appeal, we should send this film as the signature list.” – Yoko Ono London ’67
The seeds of the film FOUR (a.k.a. Bottoms) germinated in New York City in 1966. Two hours of film were shot in just two days at Ono’s New York City apartment at 1 West 100th Street. The directors were Yoko’s then husband, Tony Cox with Jeffrey Perkins. The short five-minute, fifteen-seconds low budget silent version was titled FOUR (working title, Four Square) Four was a conceptual number, as Yoko had already made several other Fluxfilms. {FOUR was actually Fluxfilm No. 16.}

The film  featured tight close-up studies of fifteen bare male and female bottoms in motion, showing ten seconds of each, as they slowly walked on an unseen treadmill. The motion was rhythmically edited, not skipping a beat. It was later compared to the motion studies of Muybridge.
“For me, the film is less about bottoms than about a certain beat, a beat you didn’t see in films, even in avant-garde films then. It was about movement. The beat in Film No 4 (Bottoms) is comparable to a rock beat. Even in the music world there wasn’t that beat until rock came along. It’s the closest thing to the heartbeat.” – Yoko 1989
The short film features the bottoms of Susannah Campbell, Philip Corner, Anthony Cox, Bici Hendricks, Geoffrey Hendricks, Yoko Ono, Ben Patterson, Jeff Perkins, Susan Poland, Jerry Sablo, Carolee Schneeman, James Tenney, Pieter Vanderbeck and Verne Williams. It premiered at the Film-Maker’s Cinematheque, New York on 6th February 1966.
(Yoko met John Lennon nine months later, just before her first London art exhibit, Unfinished Paintings, Nov. 8-18 1966 at the Indica gallery, co-owned by John Dunbar, Peter Asher and Barry Miles).
The second, now infamous eighty-minute version of FOUR was filmed in swinging London at 16 Rex Place, the residence of poet, art dealer and curator  Victor Musgrave of Gallery One.
The longer version came about when a financier took Yoko to lunch and said he was interested in her films. As she had no other ideas at the time, she mentioned that she had a short version of Bottoms which she would like to make into a feature-length film.
The eighty-minute version included many more famous and infamous bottoms (conceptually 365). The credits list many London scene-makers, including Richard Hamilton, who later designed The Beatles (white album) cover. 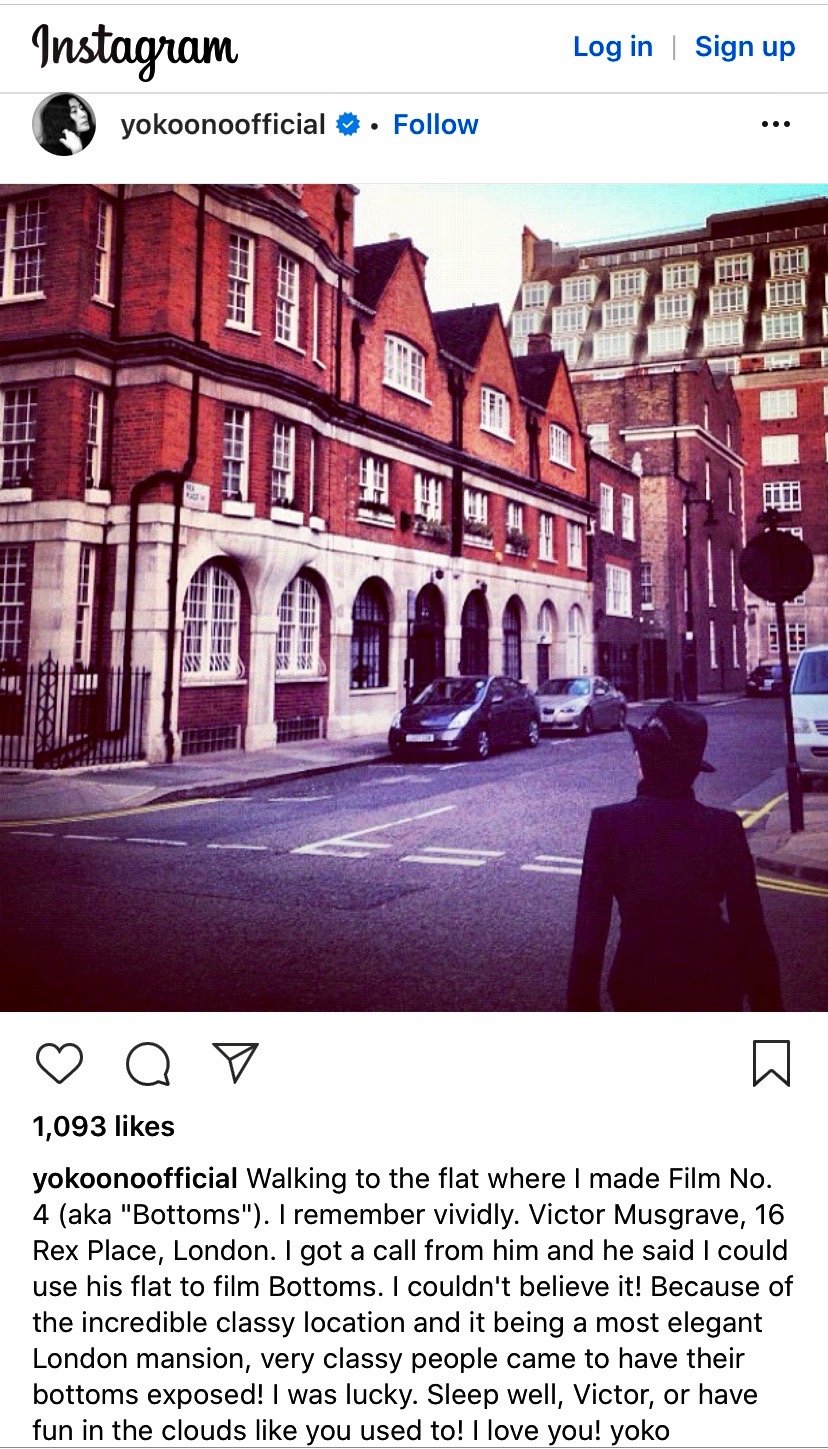 The film’s casting quickly became an event by word of mouth and an advertisement in the influential English underground newspaper IT (International Times). Talk of Ono’s film was a popular amusement in the press every day. Now, due to her colleagues’ contributions, Ono could afford more sophisticated camera equipment. The close-ups, framing only the buttocks, are more controlled. It cost of 1,000 pounds to produce. Because she felt that the sequencing was very important, Yoko spent many hours editing the film in a studio that she was allowed to use for free, after midnight.
FOUR has an amusing soundtrack consisting of shy giggling and commentary of the actual participants, intellectualizing the film’s absurd concept in relation to the art world. The soundtrack also included audio from television news coverage, and Yoko voicing the concept of the film.
A cast of approximately one hundred men and women (Yoko’s friends, artists and musicians) ‘saints of our time’ walked on the treadmill. Their bottoms were framed close-up, dividing the screen into four moving quadrants. There are conceptually 365 bottoms to coincide with each day of the calendar year. A humorous film trailer was produced, with the actual participants commenting about their own bottoms, about art, and shots of Yoko editing and filming.
In March 1967, plans for a Royal Albert Hall debut screening were disrupted. Yoko was surprised to learn that her film did not sit well with the film censors. It was deemed ‘not suitable for public exhibition.’
The censorship caused sensational and valuable media coverage, especially by BBC newsmen, who were enamored by Yoko and her film. One television station actually showed three minutes of the banned film on the evening news, as part of the censorship story – the best advertisement of all

Yoko staged a peaceful protest at the British Board of Film Censors in the early morning of March 10, 1967 when reporters had already gathered. She handed out (conceptually 1,000) daffodils, supported by several of her ‘cast’. They displayed photo stills from the film, with text asking ‘What’s wrong with this picture?’ Headlines read, ‘Fragrant Picket for Film Censor’, and ‘Yoko, the Girl BEHIND a Protest.’ She told reporters, ‘The whole idea of the film is one of peace. It’s quite harmless. It is not in the least bit dirty or kinky. There’s no murder or violence.’ 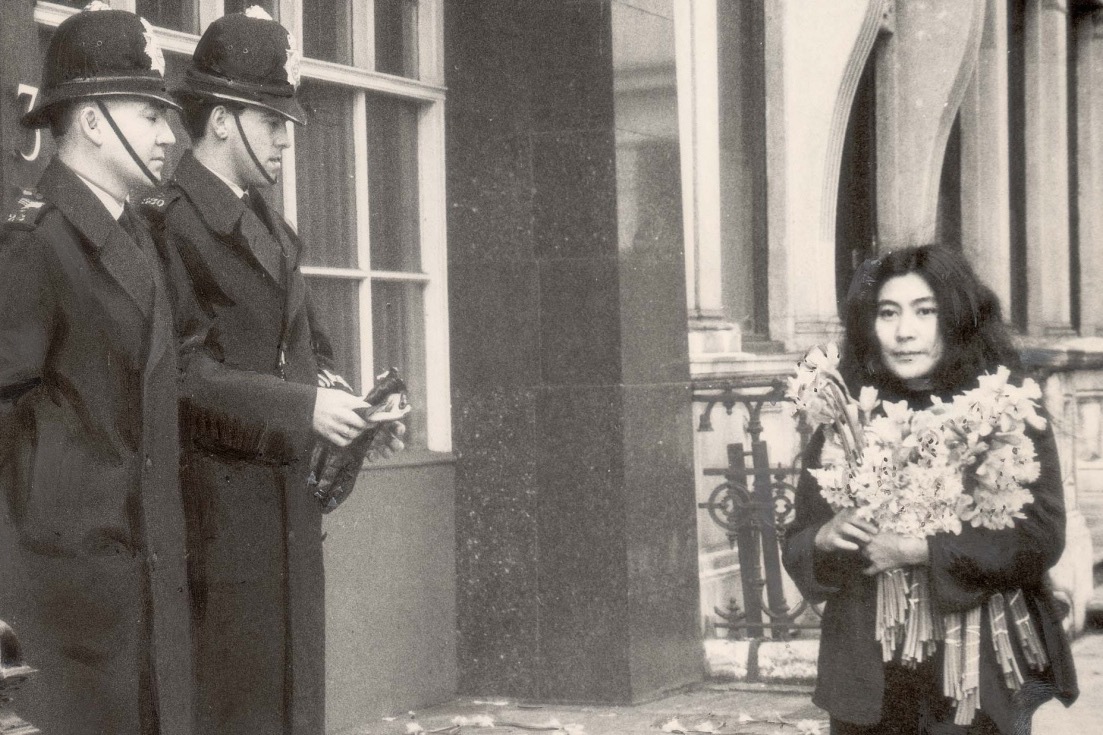 When Yoko was invited to enter the censors’ offices, she found that her daffodils were displayed on each desk. She had won them over. Bottoms was granted a Local X rating by London council and screened in cinemas. Now she was excited to begin her mooning of the art world!
(Filmmaker) Jonas Mekas once said that if the audience all walked out of your show, it meant that you were successful – or something to that effect. It was a sentiment shared by many of us in the avant-garde world at the time. It meant that you did not stoop so low as to try to entertain the audience but made a successful attempt in evoking strong emotions they were not ready to handle. It was Art vs. Entertainment. – Yoko 1988
The film premiered at the Jacey – Tatler Cinema on Charing Cross Road, 8th August 1967. After the movie, Yoko gave a short talk. She hugged and kissed each person as they left the theater, whether or not they stayed until the end.
Due to the attention that Ono was garnering (both good and bad), her avant-garde colleagues were not pleased, thinking that she had sold out 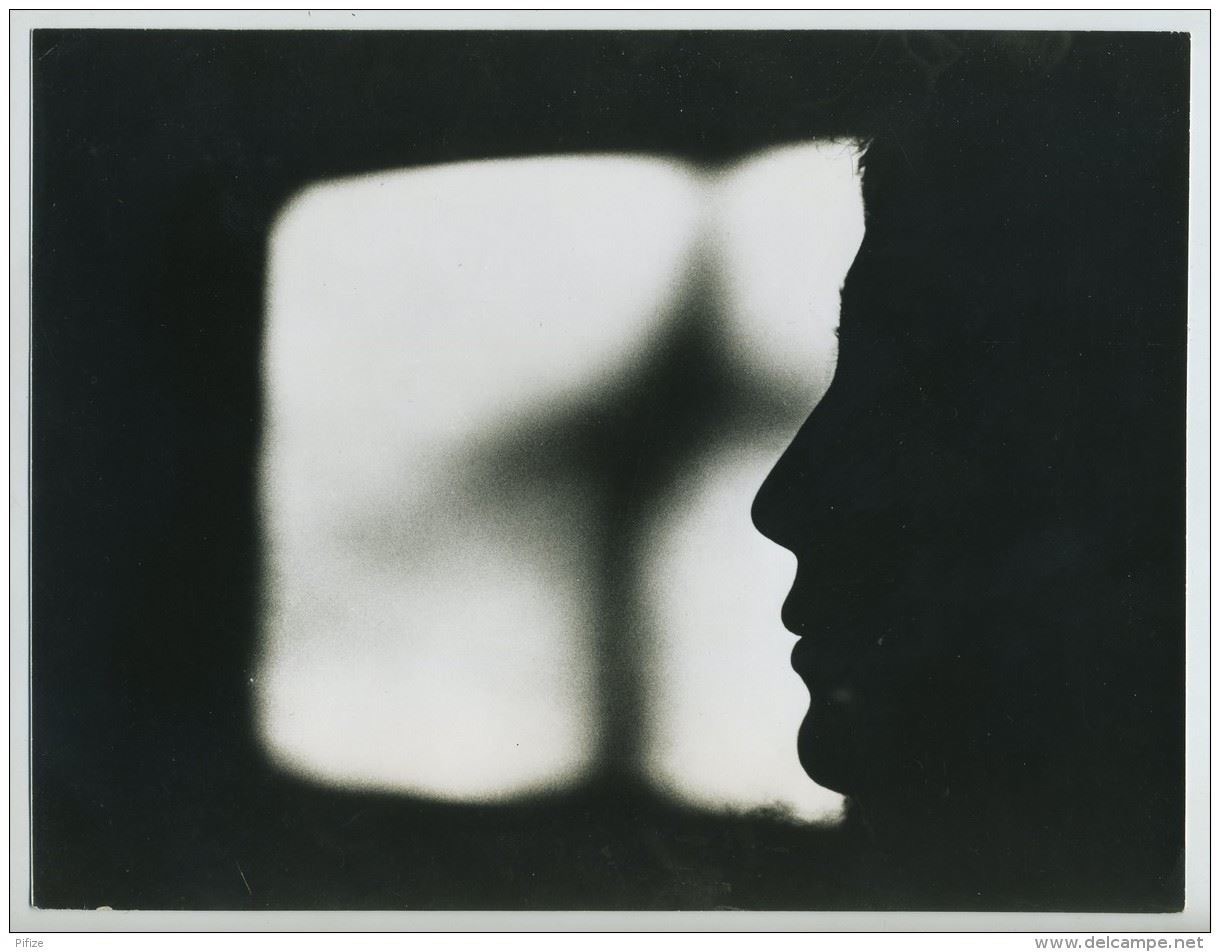 “I found out much later that they were even giggling behind the iron curtain No wonder my artistic friends dropped me. It was a total antithesis to Art per se. But actually I was the ultimate snob. I was going “Up Yours!” to the whole world including the avant-garde. It was a great high but also a lonely one.” – Yoko 1988
Although  nudity was emergent in foreign films, No. 4 was released amongst early instances of nudity in Hollywood productions, such as The Graduate and Valley of the Dolls, which included brief, titillating scenes. Despite the nudity being constant and close-up, Ono’s film was playful and thoughtful, not pornographic. Her films had more in common with Andy Warhol’s avant-garde factory movies. (Alternately and ironically, her next film titled Rape exhibited no nudity at all.)
It’s a pretty interesting film really. It’s like wine. Any film, any cheap film if you put it underground for 50 years, becomes interesting. You just take a shot of people walking and that’s enough: the rate of history is so incredible.  – Yoko 1989 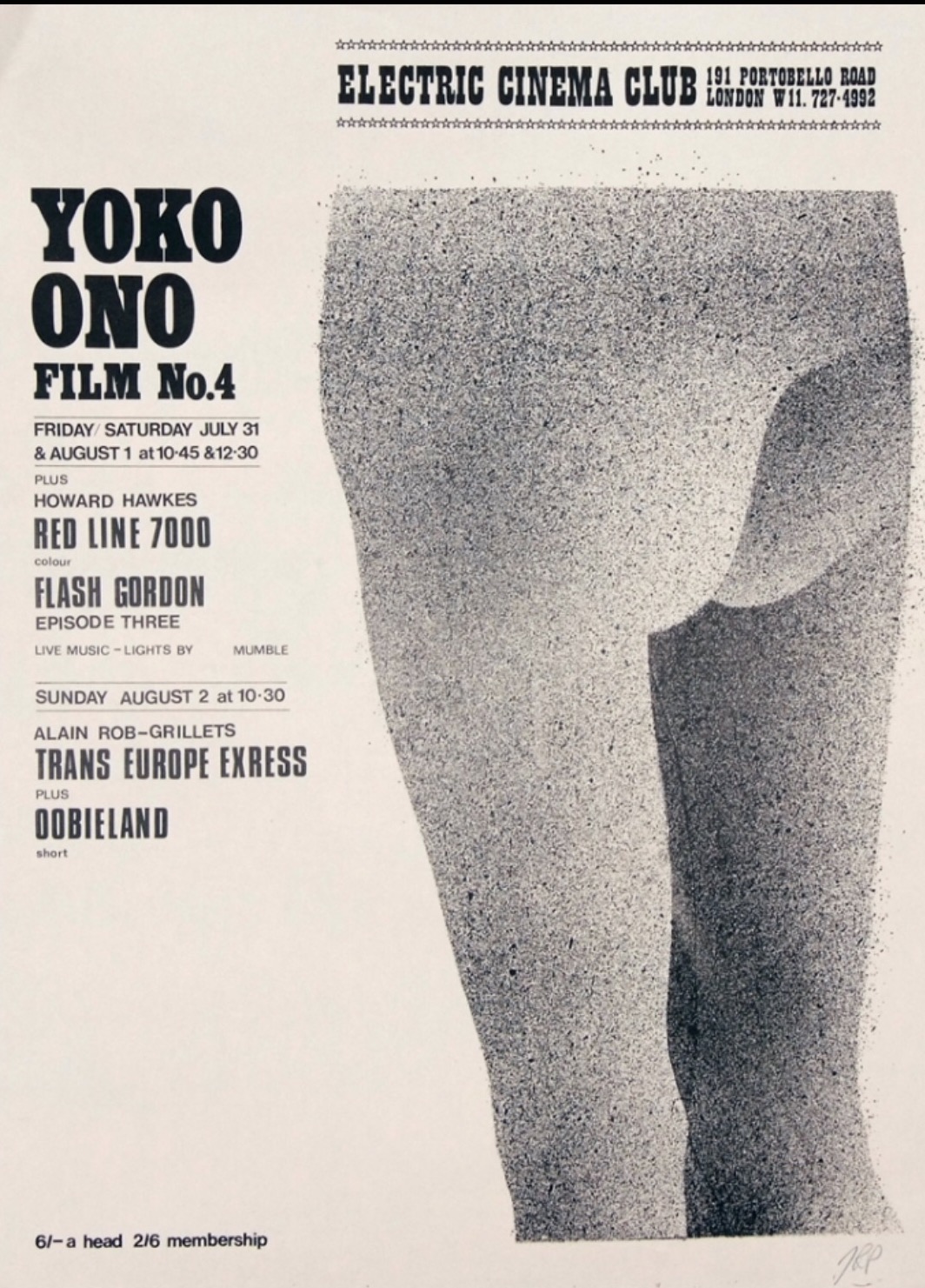 In 1996, the brand Swatch, in collaboration with Yoko Ono, designed a No. 4 watch. The advertisement read,
“It has a celluloid quality, a strip of film taken right off the projector of a Manhattan art gallery.”
Now, at age 84, Yoko petitions for peace with smiles.
In April 2017, the ban was lifted, and the film was shown at Royal Albert Hall!

Read all my stories about Yoko’s films here: 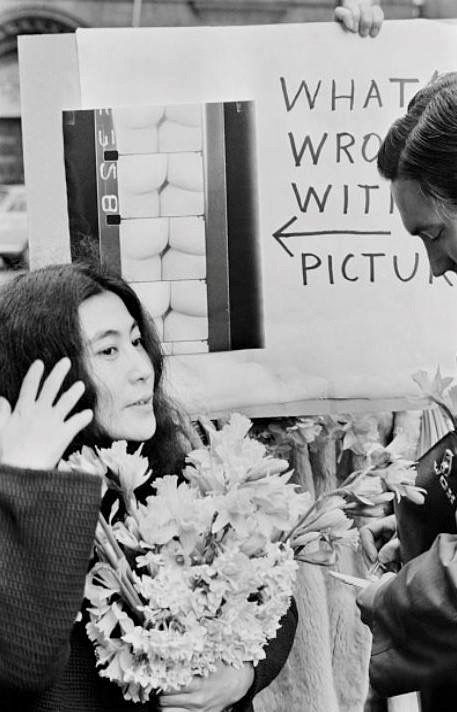 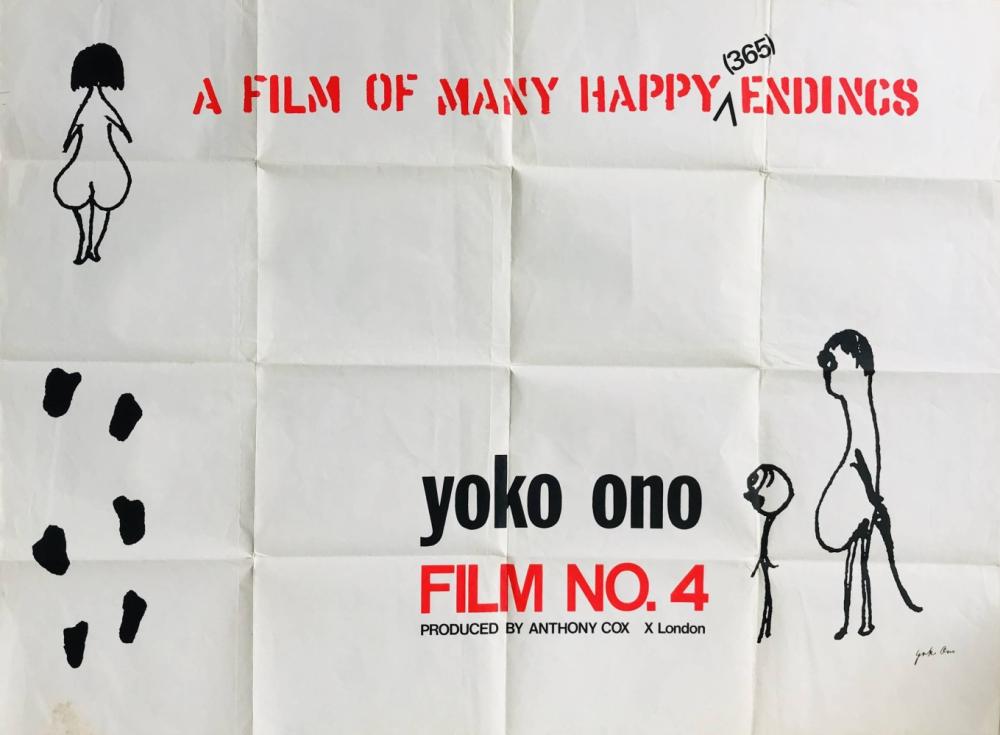 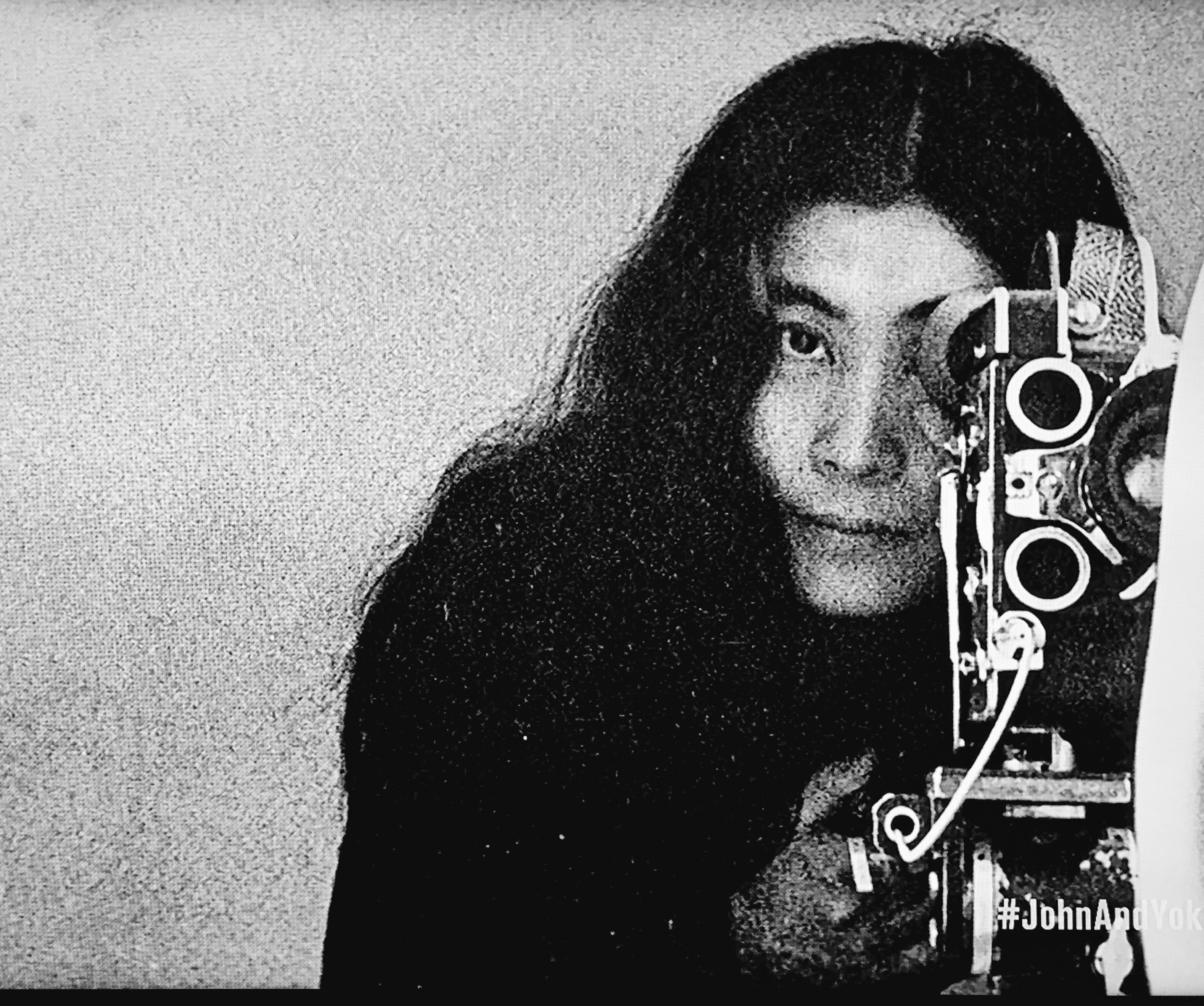 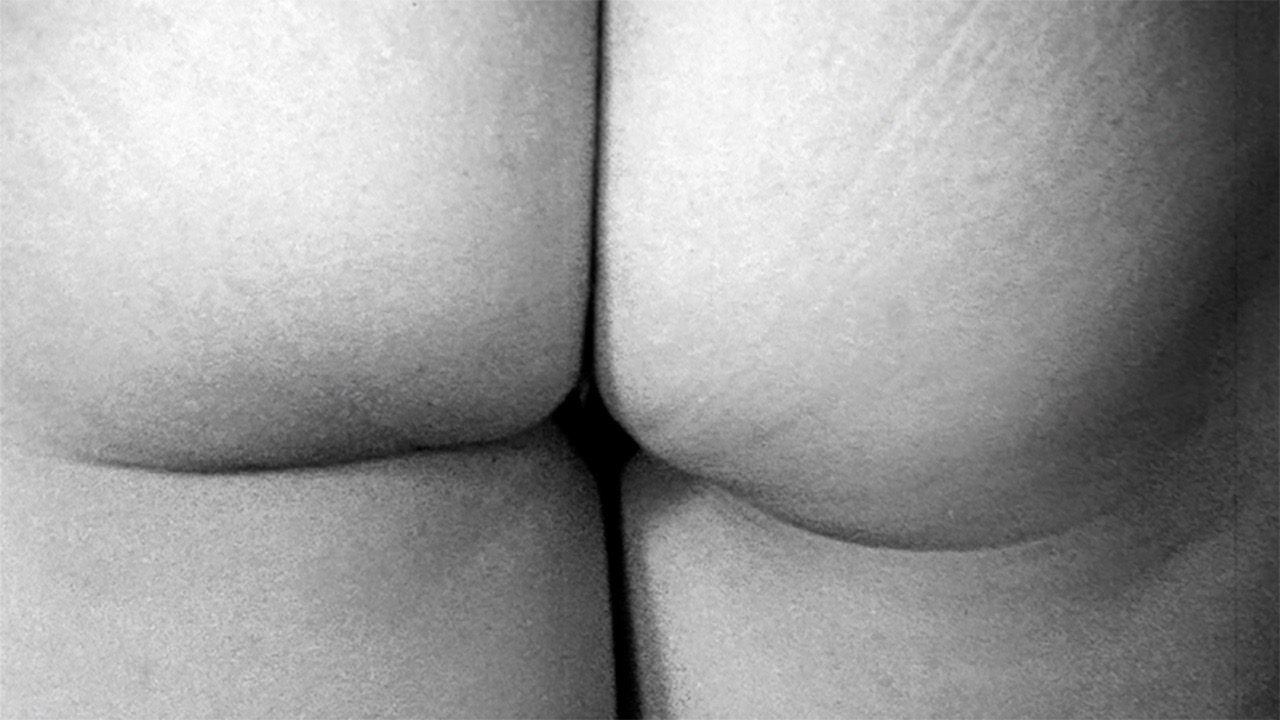 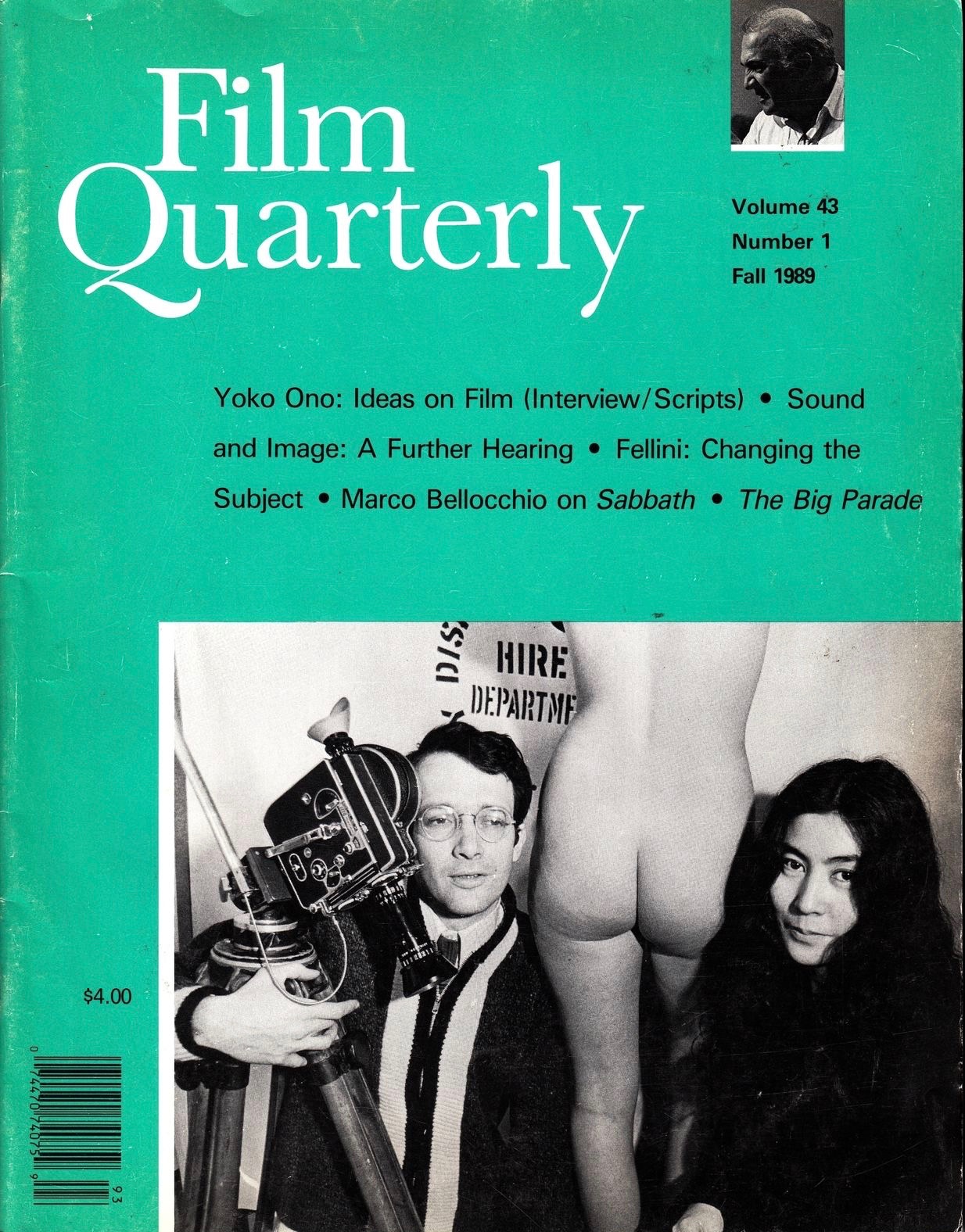 2 thoughts on “GETTING TO THE BOTTOM OF YOKO ONO’S FILM – No. FOUR”