© Madeline Bocaro, 2016. No part of this site may be reproduced or re-blogged in whole or in part in any manner without permission of the copyright owner.

“There are some songs that start to affect our life. I found that it’s true with many of my works.

After I wrote ‘Walking on Thin Ice,’ my life was literally like walking on thin ice.’”

Yoko Ono released a chilling single in February 1981 – two months after John Lennon’s death – ‘Walking on Thin Ice’. It was the last song that she and John were working on during the Double Fantasy sessions in December 1980.

“I think you just cut your first number one, Yoko.” 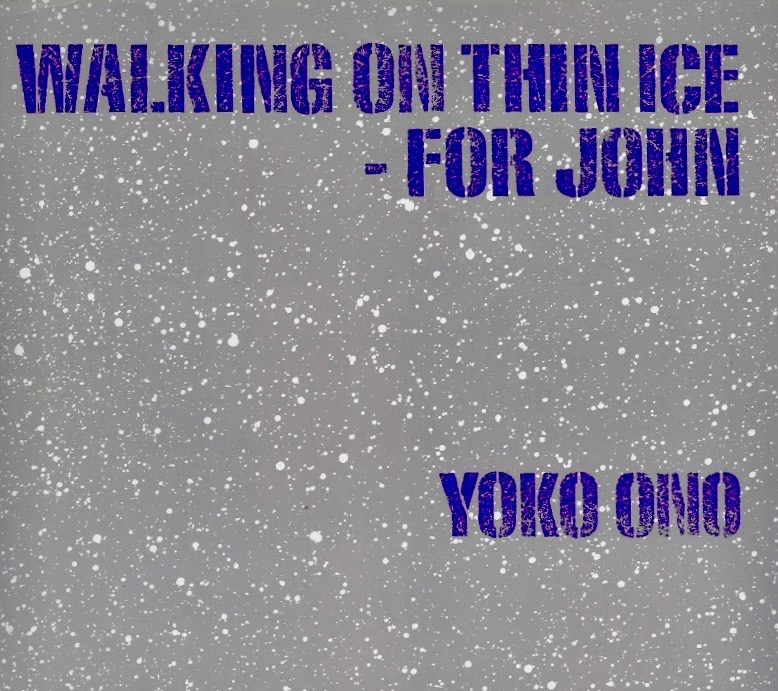 John loved Yoko’s song so much that he wanted to release it as a Yoko single with a song of his own on the B-side. Yoko didn’t think it was a wise idea.

The night before he was murdered, John played the song repeatedly – all night long. He predicted that it would be Yoko’s first No. 1 hit. In fact, there is a clip of him saying, “I think you just cut your first No.1, Yoko.” at the start of the song (in the Onobox collection, 1992). John was referring back to the recording session for ‘Please Please Me’ when George Martin told The Beatles, “Gentlemen, you’ve just made your first No. 1 record.”

Yoko was shocked when John’s prediction came true in 2013, when a CD of ‘Walking on Thin Ice’ remixes became her eleventh No. 1 single on Billboard’s Hot Dance Club Play chart. She had written the song during a car ride from Cold Spring Harbor back to the Dakota.

“Well, I wrote that song in a car coming back from Cold Spring Harbor to New York. “I want to push it a little further, experimentally. So I was thinking about Alban Berg, in one of his operas, you know, where a drunk is going ‘ahaahaahaa’.’ Just sort of saying things but in such a way that the emphasis is all wrong, distorted.”

While lying on the studio couch before recording, Yoko saw a beautiful lake (the spectacular Lake Michigan) flash in her mind, which sparked the idea for the chilling spoken part about a girl walking across the lake – herself.

“I’m like one of those people. “Oh, it’s ice but I can walk on it.” I walk like that in life… It’s very interesting because it could be something that came totally from somewhere else. But, of course, it’s about me, and that’s how I was looking at it. But then, I don’t know. I didn’t think it was about me, really. I was just looking at this girl who is walking, you know. It seems like a visual message. You see, in my mind, sound and visual is all very closely connected. It’s mixed almost. So when I hear sound, I almost hear it in color as well… When I said, “I knew a girrrl…,’ that I thought was to accentuate certain syllables that it’s odd to accentuate. And that was like Alban Berg. Let’s do like Alban Berg.”

– A Conversation with Yoko, American Songwriter, 1992

On the groundbreaking song, John and Earl Slick provide scathing guitar lines to this brittle song about risk, repercussion, fragility, life and death. They began working on the song in August 1980. During a rehearsal, Yoko objects the song sounding “weak” whereas the earlier try had been “dirty and nice”. When Hugh McCracken starts playing his guitar on every backbeat, we hear Yoko happily saying that it sounds “Really funky!”

John was carrying a tape of ‘Walking on Thin Ice’ when he was killed.

“All day, John did not stop playing “Walking on Thin Ice.” He played it over and over again. We still hadn’t overdubbed the gui­tar solo, so I thought he was checking what to do with it. But it was unlike him that he took so much time on it. I went to sleep. When I woke up on Sunday morning, he was still playing “Walk­ing on Thin Ice,” as he looked over the park. I knew the song was a good song. But I was just thinking of what else should be done musically. Never thought deeper than that at the time. Only just recently, it occurred to me that maybe John was aware of the song in a different light.”

The lyrics are eerily prophetic. Yoko released the single on January 6, 1981 – less than a month after John’s death. It was the last song that she and John were working on during the Double Fantasy sessions in December 1980. John died the following night. She questions her own prophecy in the line,

“I wonder if she knew about it.”

The most beautiful version of the song is this remixed vocal/string arrangement in this stunning video, released on her birthday in 2016:

“The last Sunday. I’m glad in a way that we didn’t know that it was our last Sunday together, so we could have had a semblance of normalcy. But it turned out that it was not a normal Sunday at all. Something was starting to happen, like the dead silence before a tsunami. The air was getting tenser and tenser, dens­er and denser. Then, I distinctly saw airwaves in the room. It was wiggly lines, like on the heart monitor next to the hospital bed, just before it becomes a flat straight line. “John, are you all right?” I asked through the density. He just nodded and kept lis­tening to “Walking on Thin Ice,” playing it loud. Walking on thin ice. Walking on thin ice … “John, John, arrre youuuu alllll riiight?” I heard my voice vibrating. I could not go near John, for some reason. WALKING ON THIN ICE. WALKING ON THIN ICE. WALKING ON THIN ICE. I realized that both of us were in a strange dimension in a weird time zone, as if we were in a dream. Then it all stopped. I went into a long and shallow sleep, with John over me, kissing me tenderly.”

I gave you my knife
You gave me my life
Like a gush of wind in my hair
Why do we forget what’s been said
And play the game of life with our hearts?

I knew a girl who tried to walk across the lake

Of course it was winter, when all this was ice

A terrible thing to do, you know

They say the lake is as big as the ocean

I wonder if she knew about it

In light of John’s sudden death in 1980, the lyrics of this song which Yoko wrote in 1973 are eerily prescient and haunting. A sudden unexpected and monumental event is evoked but not named in the sparse lyrics. There is a strong suggestion of a tragedy. ‘It Happened’ bears a trace of gospel or a traditional folk song – in the vein of the old Scottish ballad ‘Auld Lang Syne’. The 1973 version has very high-pitched delicate vocals. The song’s beautifully nostalgic, melancholy tune is played in its entirety by David Spinozza’s guitar before Yoko starts singing. He repeats the melody an octave higher, later in the song. As stated in the last lines, there’s no return to the way things were.

“’It Happened’ was actually composed in 1973 and at the time it had to do with moving away from each other. But then, when John died, I thought, “Oh, that’s what it was about” [laughs] and I put it on the back of ‘Walking on Thin Ice’. I look at that period of separation like a rehearsal… For the big separation that I didn’t know would happen. It was very good that I had that rehearsal in terms of moving along. That helped me later.

– A Conversation with Yoko, American Songwriter 1992

‘It Happened’ was one of the songs written for Yoko’s aborted album A Story which was to follow Feeling the Space. (A Story was never released as an album, partly due to the demise of the Beatles’ Apple records at the time and also John & Yoko’s separation in 1974.)
The song was recorded at Record Plant in NYC in September 1973 with The Plastic Ono Super Band, produced by Yoko and David Spinozza. It became the b-side of her Japanese single ‘Yume O Motou (Let’s Have a Dream)’ released in the summer of 1974 and performed during Yoko’s tour of Japan.

It was later remixed and released in January 1981 – one month after John’s death – as the B-side of ‘Walking on Thin Ice’ (with added sounds of John and Yoko talking while walking through Central Park at the beginning). In the second half of this incredible 1981 version, Spinozza’s guitar soars. The lyrics in this emotive song evolve into a sweeping anthem, pointing to an unnamed sudden happening – which Yoko could not have known would be John’s sudden death. Her most haunting line is, ‘And I know that there’s no return, no way.’ It’s unbelievable that the song had been written seven years prior.

An all-embracing look at Yoko Ono’s life, music and art – in stunning detail

I know there’s no return, no way

Yoko performed ‘It Happened’ on her 1974 tour of Japan. 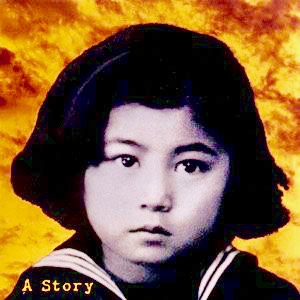 Listen to all of Yoko’s No. 1 Songs on Billboard’s Dance Chart:

“I think you just cut your first number one, Yoko.” 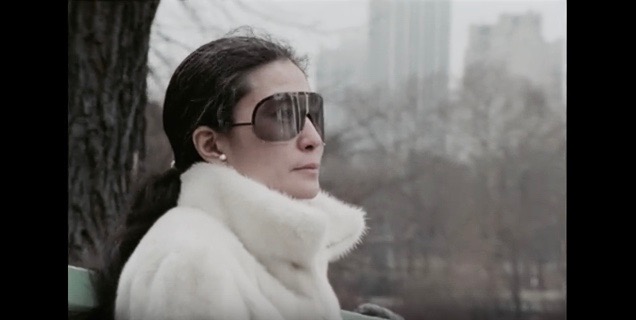 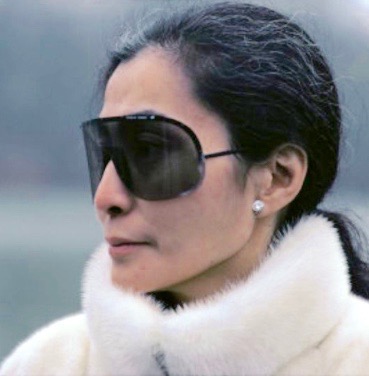 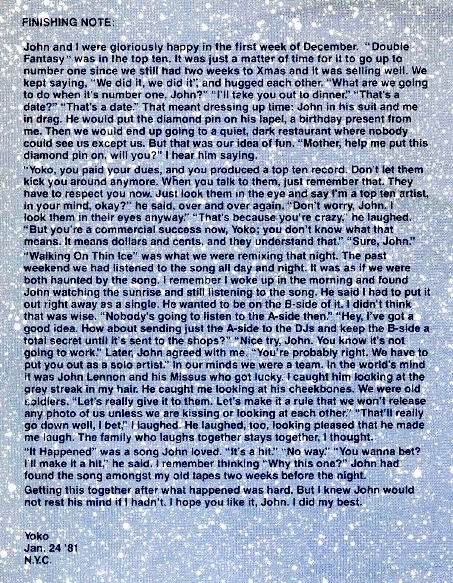 In 1986, Yoko invited me to a party in NYC for the launch of John’s book Skywriting by Word of Mouth. It was at a club called The Saint, which I didn’t know at the time was the old Fillmore East, where the OTHER side of that live jam album (included with Sometime in New York City) was recorded with Frank Zappa! I was dancing with Yoko in that very same place!!! There is now a plaque on the building stating its history.

The DJ played ‘Walking on Thin Ice” and people were dancing! It was the first time ever that nobody ran out the door when her music came on!

I said, “Yoko – look! Everyone is dancing!” And she said,

Knowing her, I think that she was NOT kidding!! 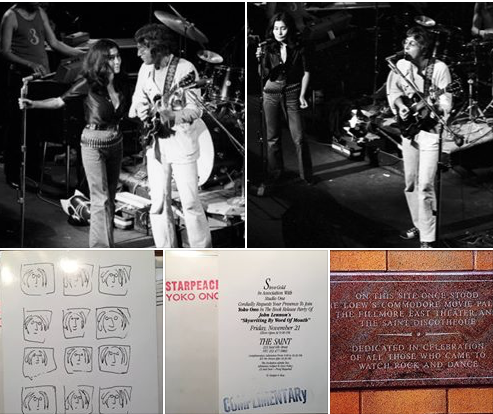