© 2009. No part of this site may be reproduced or re-blogged in whole or in part in any manner without permission of the copyright owner. 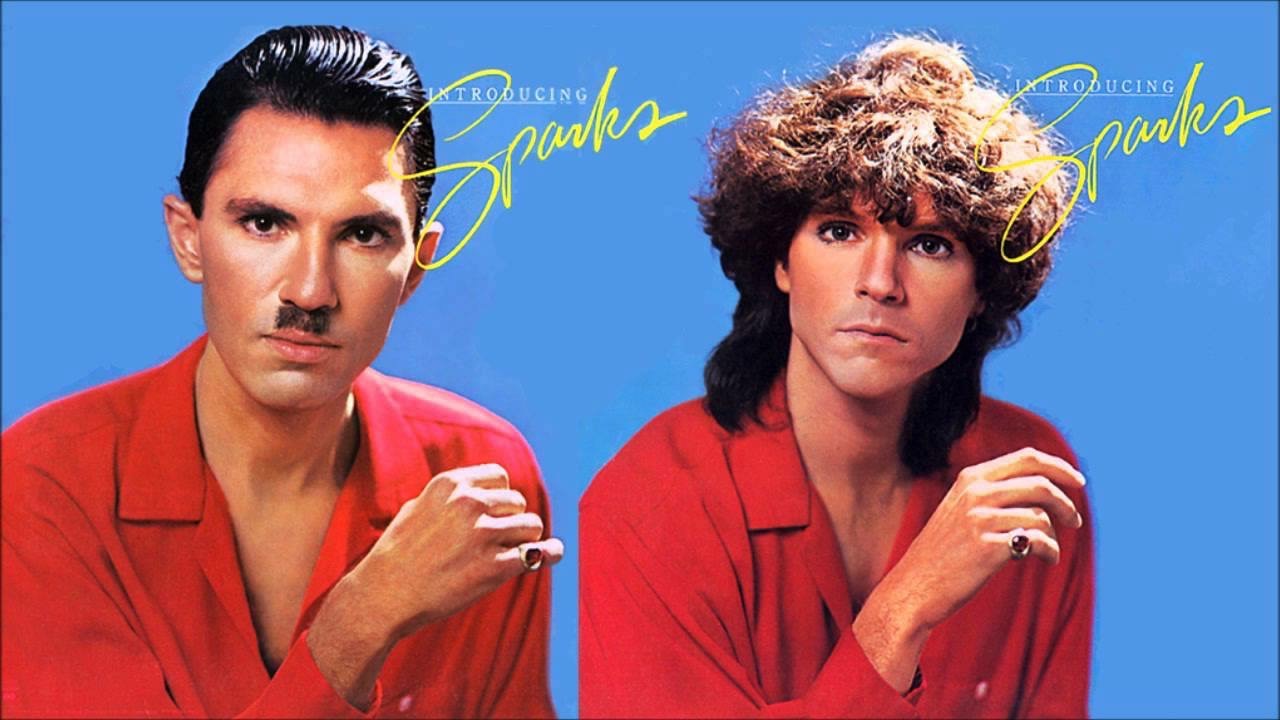 Although the sound of  IntroducingSparkswas unusually traditional for Sparks, they still remained true to form. The slick production was completely unrelated to the scathing rage of Punk in England and in New York City.  It was also incongruent with the rise of disco (which the Maels would soon tackle in their own weird way on their next album,  No. 1 In Heaven). Once again – as tame as  Introducing  sounded,  Sparks were producing the antithesis of what everyone else was doing at the time.

In 1977, after recording  Big Beat  with producer Rupert Holmes for Columbia Records in America, Sparks stayed with the label for one more album.  Introducing  Sparks carried over the traditional rock sound of their previous album,  Big Beat.

After living in London for many years when Sparks were highly successful in Europe, Ron and Russell were again based in their native California. Their admiration of the Beach Boys was highly evident on  Introducing Sparks. The album  features accomplished session men with a slick and polished sound. The album was recorded at Larrabee Sound in Los Angeles and produced by Terry Powell. Ron had a hand in the arrangements, but it is obvious that he did not have   complete artistic control. The Maels were paradoxically criticized for sounding American when they are indeed American!

The first pressings were released in November 1977. Promotional copies were pressed on red vinyl. The album did not chart. Two singles, ‘Over The Summer’ and ‘A Big Surprise’ (both with ‘Forever Young’ as their B-sides) also did not get much airplay.

A side for each brother. Russell is technically on the front (although he is sideways, as the spine is at the bottom of the photo and the opening on top). Was there a subliminal message behind the ruby rings?

“We liked the idea of there actually being no front or back cover, that they were in fact the same image but with a different one of us on each side. We thought it would look cool in shops that randomly, either Ron or myself would be the featured cover. The rings were only a detail that we felt helped better color-coordinate us with our shirts. There’s your symbolism theory shattered.”

The portraits were by photographer Bob Seidemann, who also shot the infamous and controversial  Blind Faith  album cover (August, 1969). That cover featured a topless pubescent girl holding a silver space ship. The image, titled ‘Blind Faith’ by Seidemann, inspired the name of the band. It was decided to not print the name of the band on the cover, but only on the wrapper. When the wrapper came off, so did the type. This was done previously for  The Rolling Stones‘ 1964  debut album, the Beatles’  albums  Rubber Soul  in 1965 and  Revolver  in 1966, and  Traffic’s  1968 debut album. Sparks employed this idea of obscurity on their 1974 albums  Kimono My House  and  Propaganda, which also omit the band’s name from the album covers. 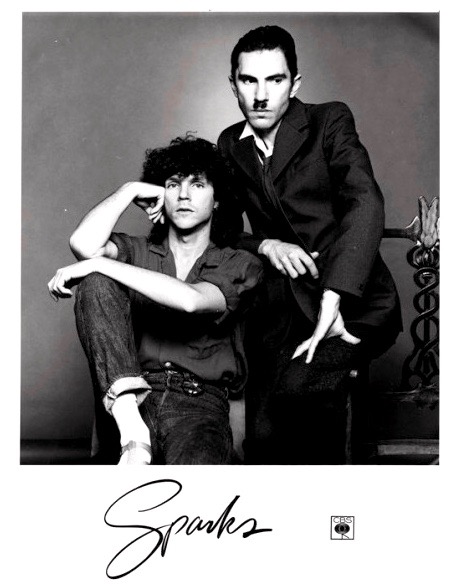 ‘A Big Surprise‘  begins with a Ronnettes ‘Baby I Love You’ style intro. It’s a very atypical ‘boy meets girl’ song for Sparks  – containing those actual words in the lyrics.  ‘Occupation‘  is an ode to the working man. The song really comes alive with Russell wearing a variety of job uniforms in the promotional video. If you can envision each one while listening, the song is even better!

‘Ladies‘  begins with a beautiful vocal harmonic. The song includes a litany of heroines in the singer’s living room. He hides the ladies when his mom comes home, and they all mysteriously disappear when his friends come over. The best couplet here is,  ‘

While Joan of Arc just sits and smokes”.

With its stomping beat,‘I’m Not‘  takes the opposite approach to Ron’s usual autobiographical songwriting. The lyrics list all the things he is not, or things that he is not doing; shaving, working, getting dressed, eating lunch – and he’s not missing much! Russell’s punchy, almost shouting vocal with a slight echo is really cool!

The bubbly and triumphant ‘Forever Young‘  is the ultimate in defiance.  “I’ll sit and watch the history books get thicker”.   ‘Goofing Off’conjures memories of a Bar Mitzvah, with a poignant violin intro worthy of Itzhak Pearlman punctuating the happy traditional dance. The song includes a searing guitar solo. This seemingly ethnic klezmer tune is simply a celebration of the weekend.  (“Two days to try to forget a week of crap and crud.”)  After all the partying, the protagonist is dragged in to work and  ‘propped up in a chair’   –“ just as he was at his Bar Mitzvah!

‘Girls on the Brain‘  is a twisted bluesy standpoint about a debilitating ailment of the same name. On  ‘Over The Summer’  in the light of lush background harmonies, Russell’s plain girlfriend literally becomes hotter and hotter by summer’s end. This song is truly steeped in homage to the Beach Boys.

‘Those Mysteries‘  is a song spent in wonderment.  “Russell shines on this beautiful ballad of bafflement as to everything that exists, and that which does not exist. I don’t even know what I don’t even know.”  The demo version (performed solely by Ron and Russell) includes four additional words to the final questions, omitted from the album version.  “Why is there time? Why is there space?  “Why is there wine?

‘Over The Summer’ and ‘A Big Surprise’ were released as singles, with ‘Forever Young’ on both B-sides.

When Sparks performed  Introducing Sparks in live 2008 (during their 21 X 21 tour in Islington during which they performed all of their albums to date in their entirety), it was one of the most exciting concerts of the series. None of the songs had been previously performed live, and ‘Goofing Off’ was voted amongst the top songs requested by fans at the final show of the tour.

Introducing Sparks  had been out of print for decades, as Columbia Records held the rights to the album. Although the entirety of Sparks catalog became available on CD,  Introducing  Sparks  was the last to be released in the format, although bootlegs were available.

In November 2007, after several campaigns by Sparks fans for its release,  Introducing  Sparks  was officially released on CD via Sparks’ own label, Lil’ Beethoven Records. The CD was not remastered from the original studio master tapes (owned by Sony and held in their vaults) but from vinyl. On a later release in Japan on SHM-CD (high end CD format), the same vinyl remaster was used.

Introducing  Sparks was part of a Japanese CD re-release series of six Sparks albums (Imperial Records, 2009) including the outtakes, ‘Kidnap’, ‘Keep Me’, ‘Breathe’ and ‘Fact or Fiction’. It also includes a demo of ‘Those Mysteries’.

The booklet includes Russell’s written descriptions of the bonus tracks:

‘Kidnap‘   –“ “Sung by the young victim of a botched kidnapping where the wrong boy is grabbed. The kidnappers appeal to the President of the United States to have all of America contribute a little something to fulfill the ransom demands. Once released and now seeing how pro table this scheme can be, the young boy annually teams up with the kidnappers pulling off the same scam and this time splitting the profits.”

‘Fact Or Fiction‘  –  (unreleased demo): Sets the record straight on some of the world’s most misunderstood thoughts and conceptions. Note: at that time we gave the demo to Rick Nielsen of Cheap Trick as a tune for the band to cover. They didn’t, but it’s apparently remained a staple on their touring bus entertainment system.”

In 2014, a fan discovered a quadrophonic master tape of  Introducing Sparks, with an early mix of eight songs. The tape also included the outtakes ‘Kidnap’ and ‘Keep Me’. All had countdown intros and cold stops instead of fade-outs.

There was no live tour for  Introducing Sparks. Nor was there a tour for the next Sparks album, which switched gears in a big way. In 1978, the Mael brothers teamed up with disco diva Donna Summer’s producer Georgio Moroder for  No. 1 in Heaven  (released in March 1979), taking things to a whole new level. Sparks spawned the pop duo and an entirely new age of music.