John and Yoko made complementary debut solo albums in 1970. The album covers were similar (John leaning on Yoko / Yoko leaning on John beneath an oak tree at their home Tittenhurst Park in Ascot. The photos were taken by their friend and assistant Dan Richter. 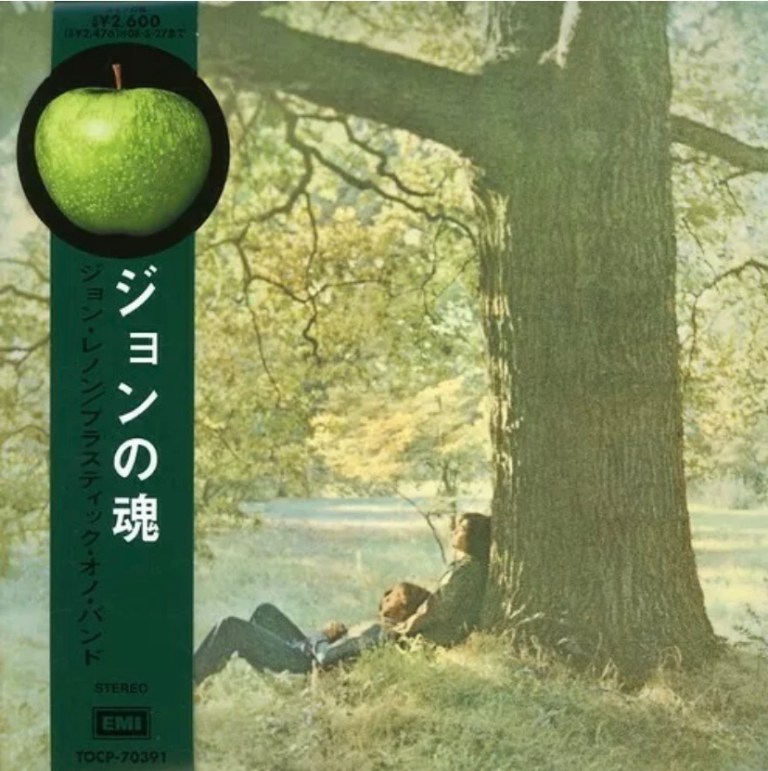 The Apple Records label on both albums bear a white apple rather than the usual green. Album credits on John’s record include Wind: Yoko Ono.

Yoko: “Whenever I noticed something, he used to say just whisper to me, so there was a lot of whispering going on.

John: “She played the atmosphere. She has a musical ear and she can produce rock n’ roll. She can produce me, which she did for some of the tracks…”

“I think that my mom brought my father to that place of pure, visceral expression. My mom was avant-garde and he was pop. She also gave that connection to a pure expression. Some of the ways my mom sings is almost like a baby crying. My father was very influenced by that and you can hear it in songs like ‘Mother’ on John Lennon Plastic Ono Band. He screams at the end. That was my mother’s influence.

The opening track, ‘Mother’ finds John screaming for his mom, who gave him to his aunt to raise. (His mom Julia was suddenly struck down by a car when John was seventeen). It starts with the tolling of a funeral bell. John was also tormented by the absence of his father, whom he sings about in the second verse.

“ I think Janov was a daddy for John. I think he has this father complex and he’s always searching for a daddy.”

So much has already been said about this masterpiece on which John bares his soul. John’s first post-Beatles solo album released in 1970 demystifies and ends the mythology of his life, which completely changed from this moment on. Sean sums it up beautifully, as he speaks about his father’s song ‘God’.

“Honestly, I like that (opening) line because it’s enigmatic – I feel like  I’m forever thinking about it. It’s not easily reduceable. It doesn’t have any kind of finality to it, which is why he manages to address the existence or non-existence of God or religion specifically…

I admire the song because he manages to get away with calling a song ‘God’, and it being heavy and beautiful. I don’t think most people couldn’t get away with that. Obviously there are songs about God that are gospel/Christian rock… Obviously he wasn’t religious. He was born C of E (Church of England). I wouldn’t say he was an atheist either. He had a very spiritual life. He famously was always searching for something, right? He believed in cosmic things. My mom and dad both, they were always sort of looking into astrology and all that stuff (which I’m a little cynical about). But still, they were open to things…

I don’t think it was  an attack on religion. I think arguably, it’s not even really a song about god. The body of the song is not necessarily about god. (The opening line) is sort of like an introduction, like an overture for this confession – he’s about to make a confession  that’s some kinda breakthrough he’s having emotionally, about what matters to him, and the (opening line ) “God is a concept” line is a sort of intro or overture setting the stage for something that’s special. That’s not just a regular song. Saying This is not a pop song. It’s a moment that I’m gonna get into in a minute… Here we go… And then he just lists all these things that he doesn’t believe in. I don’t think he’s insulting or belittling any of those things.  He’s trying to say that the moment that he is in at that moment, being in love with my mother – that feeling of the truth of it  – of love, of pure love is the only thing that matters ultimately.

However, I think a lot of people interpreted it as a F-you to the past, or Zimmerman or the Beatles or whatever. I don’t think it was that at all. It’s too heartfelt for me to take it that way… It’s filled with too much love and real vibes to be snarky or negative. It’s not a negative song in any way. It think it’s just sort of placing the whole world and everything in it, and  all his memories and ideas and religion and god over there, but here is Yoko and me.  It’s just making that distinction. This is reality. I’m in love…

It’s a song like no other. it really epitomizes this album. It has a direct  line to his heart, his soul. It bypasses your brain and cuts straight to your gut.  It’s so unconventional in structure – it’s really representative of how radical the shift was at this moment. The Beatles were ending, John and Yoko were starting. He was changing his relationships, he was eventually going to go to New York… It was a big cosmic moment for him. To me it’s always been more than a song because doesn’t even have  a verse/chorus structure. It’s got this bizarre declaration at the beginning and a sort a confession – a  list of all these  things that he feels like are relatively meaningless compared to love. which maybe he’d said in other ways before but I find this song to be very unique. There’s no song like it that I can think of anywhere else from anywhere else. And there’s no song like it from him.”

We can hear how heavily Billy Preston was influenced by ‘Love Letters,’ a gorgeous tune sung by Ketty Lester (Revoyda Frierson) from Arkansas, released in 1962. The sparse gospel piano arrangement (played by Lincoln Mayorga) and the lilting time signature are replicated by Billy on ‘God.’

‘Love Letters’ is played at the end of the 2013 documentary about The Beatles’ Fan Club secretary, Freda Kelly, titled Good Ol’ Freda. It also appears in the 1987 David Lynch film Blue Velvet. The songwriters are: Wayne Hector / Peter Lord / Peter Moreland / Vernon Smith / V Jeffrey Smith / Alistair Tennant. The classical pianist Lincoln Mayorga who turned this record into a masterpiece, was also a session musician / arranger who worked with Gloria Jones on her version of ‘Tainted Love’, Frank Zappa, Sam Cooke, and Barbra Streisand, and many others.

Listen to this masterpiece!! https://www.youtube.com/watch?v=b00bRYZSRew

Phil Spector had been booked as the producer on the John Lennon/Plastic Ono Band recording sessions, but most songs were recorded, and mixed by John in the evenings without Phil being present in the London studio.In October 3, 1970, while sessions were underway, John published this hilarious, simple full-page advertisement in the major trade publications of the day; Billboard, Cash Box and Record World magazines –

PHIL! JOHN IS READY THIS WEEKEND.

However, we do know that Phil played piano on the song ‘Love’.

“I remember when we did Plastic Ono Band, and I had to do the piano solo on “Love.” John would say, “You don’t like being on the other side of the goddamn, fookin’ glass, do ya?” And it was true. I made a million mistakes, it took 20 takes. And I had it down, I knew it perfectly. I memorized it. But as soon as I went behind the glass, and John and Yoko were [in the control room], I started hitting wrong notes. He said, “Now, you know what it’s like to be an artist.” You have to perform.”

Spector also related strongly to the album, having lost his father (a suicide) when he was very young. He and especially identified with the song ‘Isolation’. Phil also told Anthony DeCurtis in 2011…

“ That album was not only his life and Yoko’s, it was mine. “Isolation” – I still live that way. It still tears me up every time – “We’re afraid of everyone/Afraid of the sun/Isolation.” That tore me to pieces…

“It was a psychoanalysis. It was an analyst’s view of what John was going through. I identified so much with the album, I couldn’t help but get absorbed in it.”

” One of the best experiences of being on a record I have ever had. Just being in the room with john, being honest, the way he was, screaming, shouting and singing. It was an incredible moment.”

“I have no real memory of Phil producing this record at all. I remember he came in later, but I never felt Phil was like, oh he produced this record. Really, the engineer took down what we did and John would mix it.”

I love the cymbal crashes in the beginning  instead of the tolling bell chimes on John’s album.

Check out my Yoko Ono biography:

A complete look at Yoko Ono’s life, art and music, in astounding detail.

For anyone who is a fan of John Lennon (or the Beatles) who would like to know more about the extraordinary woman whom he loved.

See the reviews and more info on the website:

The book is now on two Best Music Books of 2022 lists! 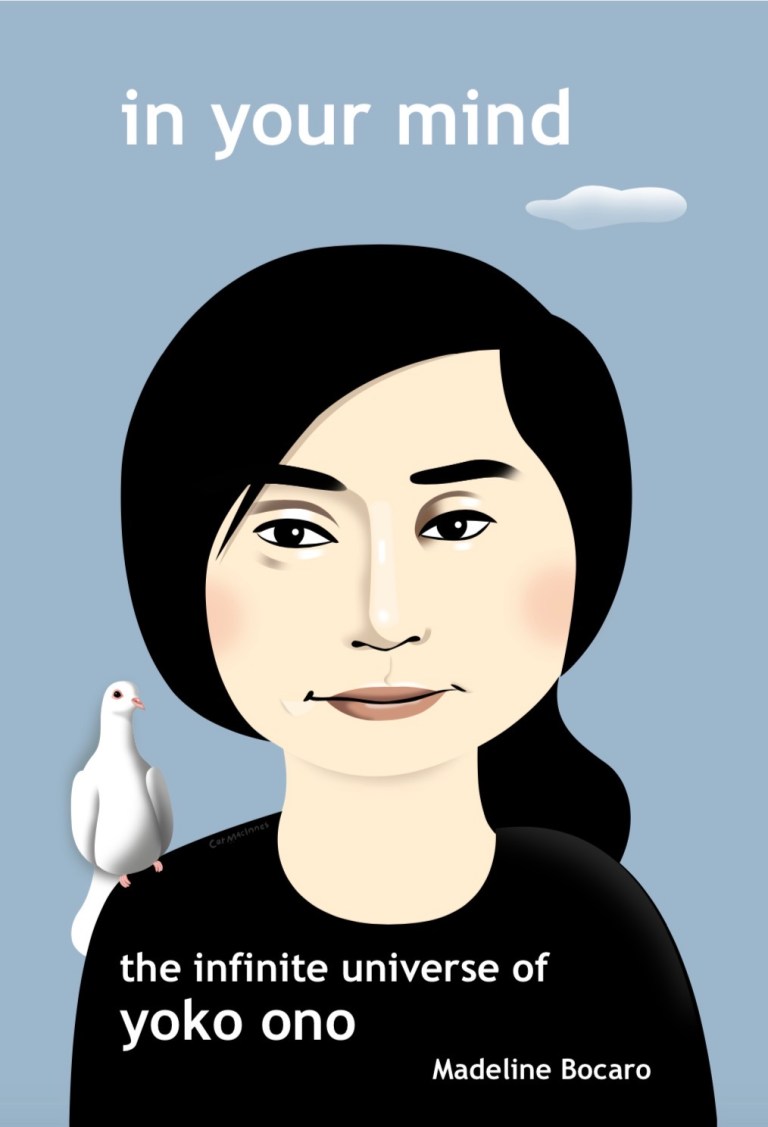 © Madeline Bocaro 2017. No part of the text on this site t= may be copied, photocopied, reproduced, translated, re-blogged or reduced to any electronic medium or machine-readable form, in whole or in part, without the  prior written consent. Reproduction in any form without the permission of Madeline Bocaro is prohibited. All materials contained on this site are protected by United States copyright law and may not be reproduced, distributed, transmitted, displayed, published or broadcast without prior written permission. 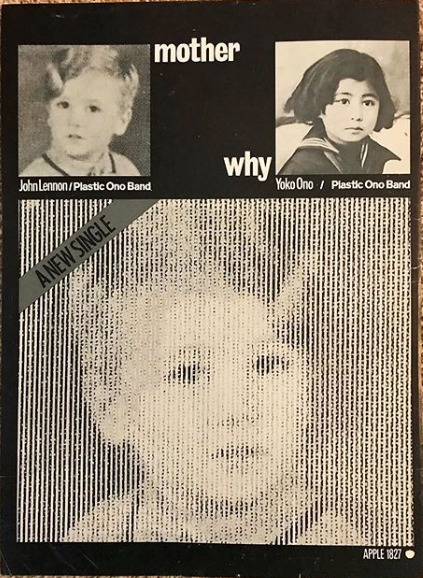 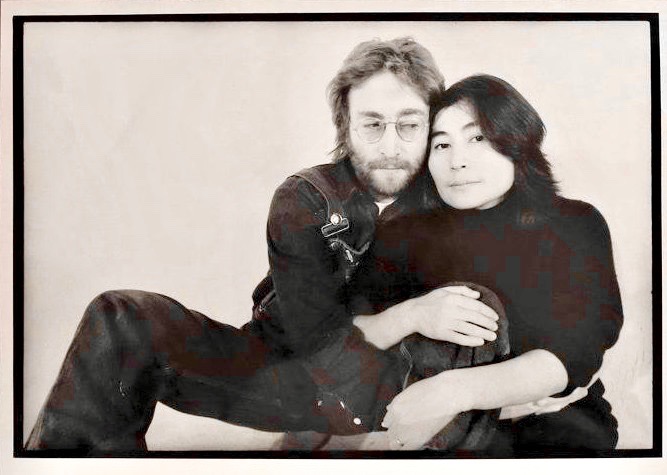