© Madeline Bocaro, 2018. No part of this site may be reproduced or re-blogged in whole or in part in any manner without the permission of the copyright owner.

An all-embracing look at Yoko Ono’s life and work in stunning detail. 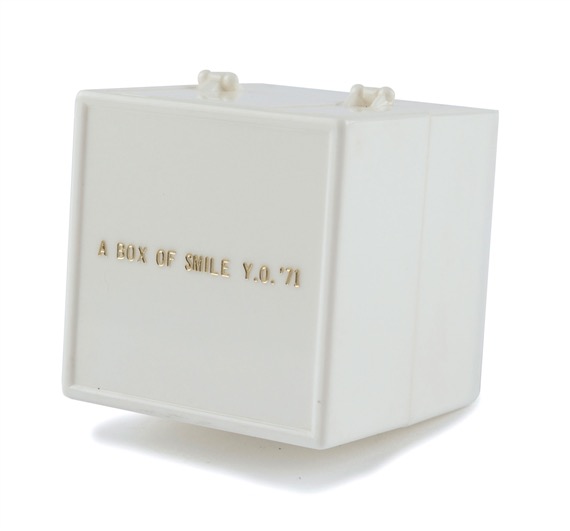 “My ultimate goal in film-making is to make a film which includes a smiling face snap of every single human being in the world.”

Yoko’s smile-gathering concept became real in 2012 with her request for everyone to upload their smiling image to Instagram and Twitter via her #smilesfilm iPhone app. All the smiles were collected to create “a global string of smiles covering the planet and shooting to the Universe”.

Yoko’s 1968 Film No. 5, (Smile), featured John Lennon in his garden as he looked into the camera. John’s 3-minute shift between a straight face and smile is elongated in super slow motion to over 50 minutes.

The most whimsical art piece by Yoko Ono is A BOX OF SMILE. When you open the lid of Yoko’s small plastic box and see the mirror inside, you can’t help but smile! YOU have completed the artwork, and your smile will always be there.

When Yoko presented the box to host David Frost on his television show in 1969, he pompously exclaimed, “It’s the most beautiful thing I’ve ever seen”! (John joked, “We thought you’d like it!”)

Yoko talks about her idea for a Smiles film on the David Frost Show in December 1971:

A Box of Smile was conceived in 1967.  An edition of 1,170 small plastic boxes inscribed ‘A BOX OF SMILE  Y.O. ’71’ in gold were produced in 1971. Sarah Lawrence’s library holds one in their special collection.

A larger cardboard version was made for the John Lennon/Yoko One to One to One benefit concert in New York City on August 30, 1972.

In accordance with Fluxus founder George Maciunas’ wish to keep Fluxus art in print, ReFLUX Editions continued A BOX OF SMILE. In 1984, with authorization from Yoko, the remaining empty 1971 boxes were fitted with mirrors and stamped ReFLUX on the bottom. They were available in black, white and clear.

“It was hard for me, too. After my husband passed away, I tried to smile for my health.”

Yoko is always encouraging us to smile.

For her 1989 retrospective, at the Whitney museum in New York City, a bronze Box of Smile was included amongst all of Yoko’s earlier works which were also presented beside bronzed versions for the occasion.

“When you go to hotels or somewhere like that, they always have a mirror, but the mirror doesn’t really reflect you. It just suggests, like an airbrush thing of you. And if you keep looking at what you see in that mirror, then you can’t really deal with your real face… You have to break the mirror, but you also have to see the mirror. You have to have that dichotomy constantly. If we don’t have that dichotomy, then we become sort of two-dimensional. We become like a painting, not a person.”

Smile in the mirror.
Do that every morning and you’ll start to see a big difference in your life.

East is a mirror of the west, and vice versa.
And there’s no crossover.
We are one. 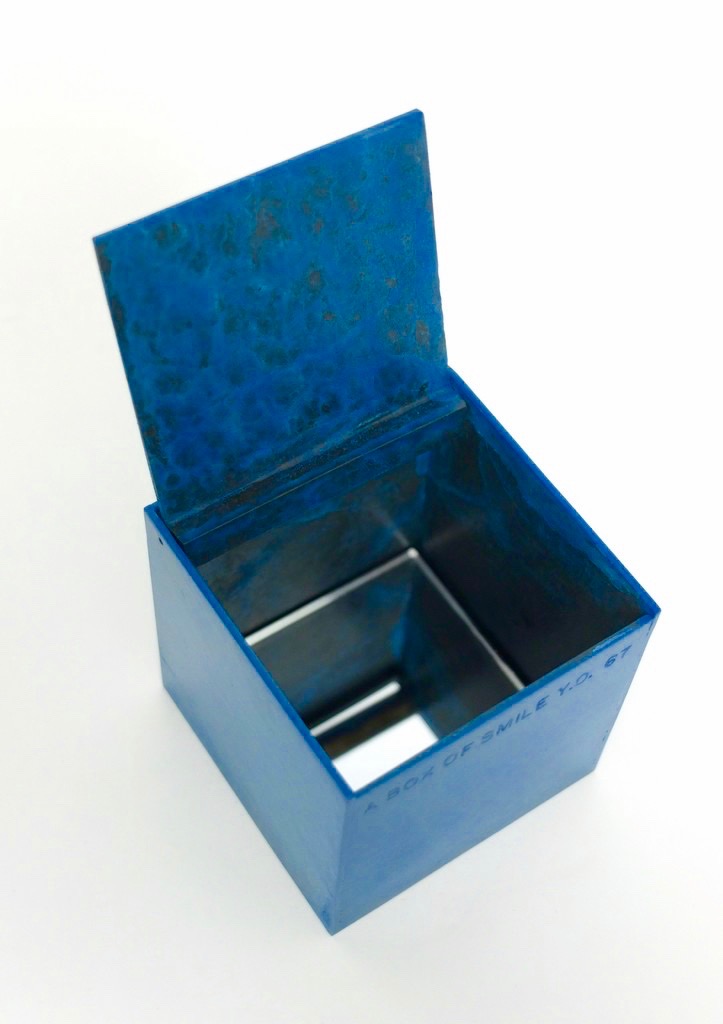 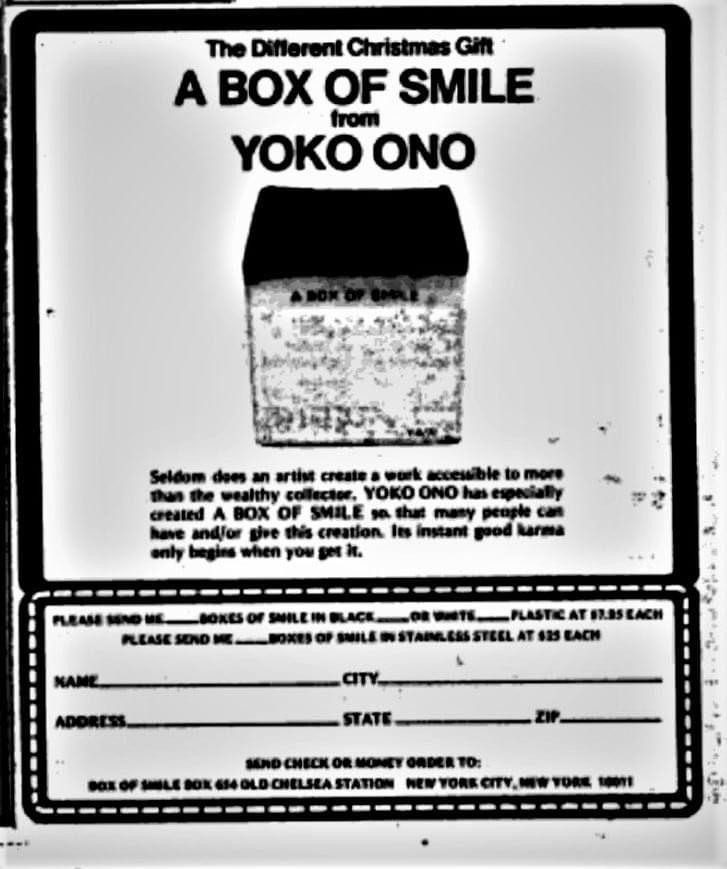 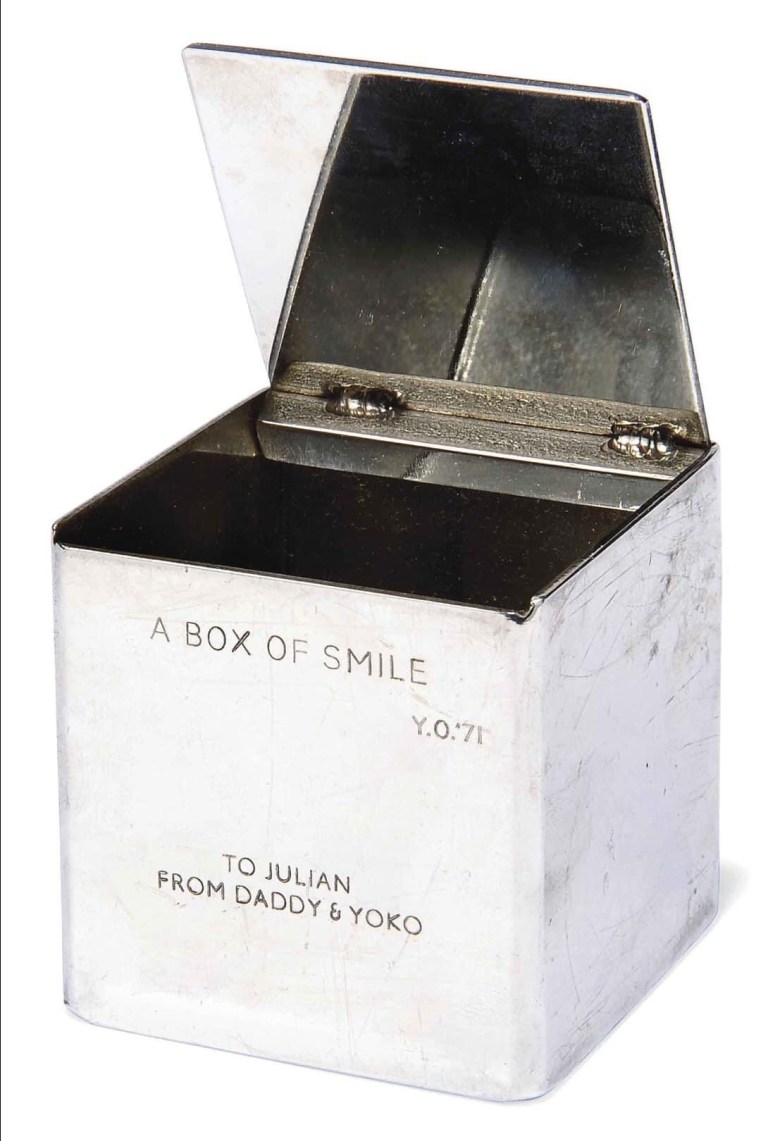 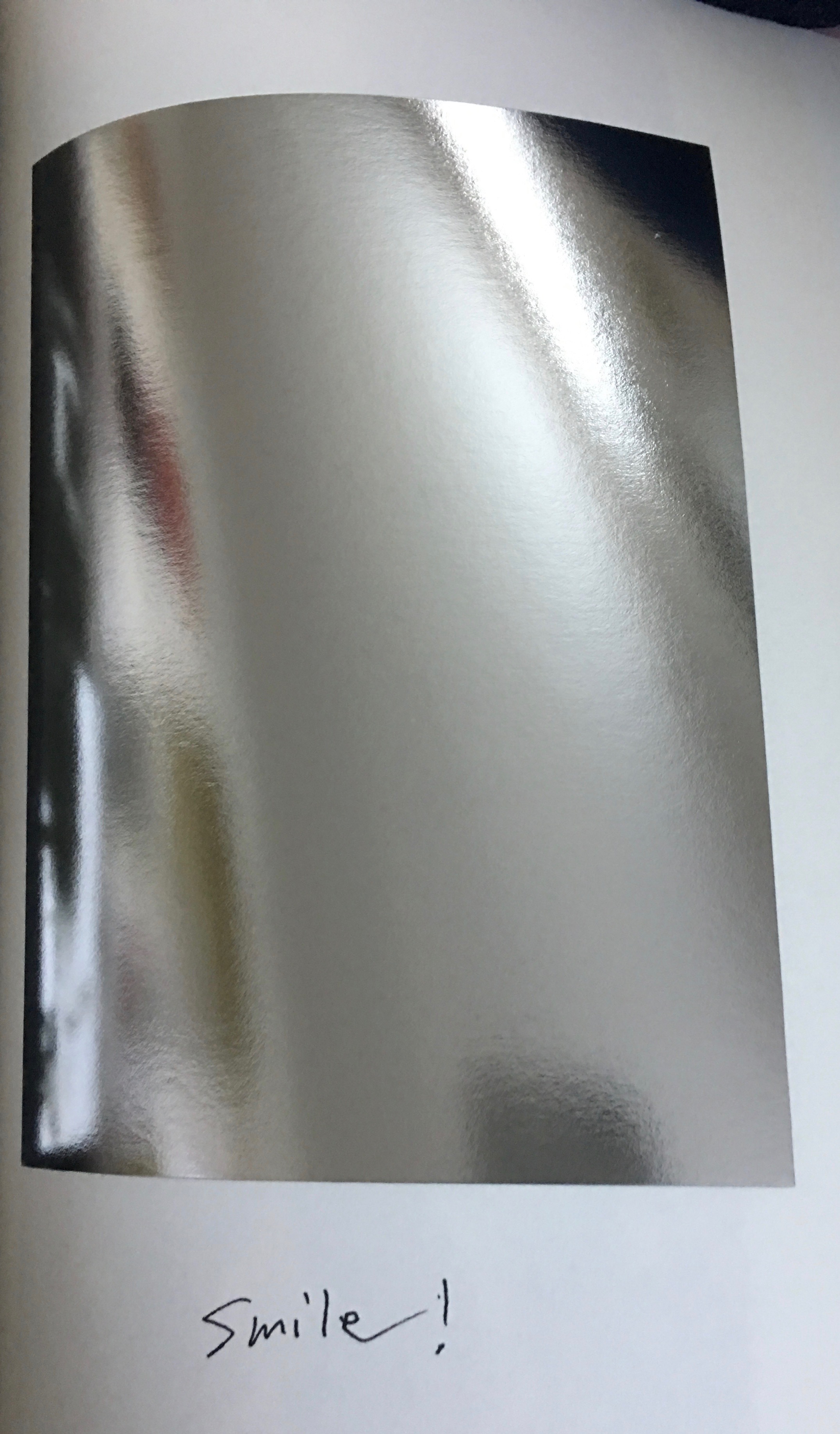 7 thoughts on “OPEN YOUR BOX! YOKO’S BOX OF SMILE”