‘YOU HAVE A TERRIBLE PROBLEM’

Sparks vs The Rubettes on Top of the Pops

In May 1974, we were with Island and there was this real big push to try to make ‘This Town Ain’t Big Enough For Both of Us’ work. There was resistance initially because it’s a pretty unique song, but they were making a bit of headway and by a few lucky breaks the song got into the charts and we were offered Top of the Pops. And all of a sudden Island Records were rejoicing that they’d done it finally and this was going to be the massive break for Sparks in the UK.

So we went to re-record the song and the producer of the show, a guy named Robin Nash, came down to meet us. A very British gentleman, and he says, [perfect BBC accent] ‘Hullo, Robin Nash, Top of the Pops,’ and I went, ‘Hi, I’m Russell from Sparks,’ with my best American twang. And he said, ‘Oh. Oh excuse me, I must make a telephone call.’ And they pulled us off of the show, because they’d assumed we were British and we weren’t part of the Musicians’ Union here. So we were removed from Top of the Pops that week and replaced by The Rubettes. 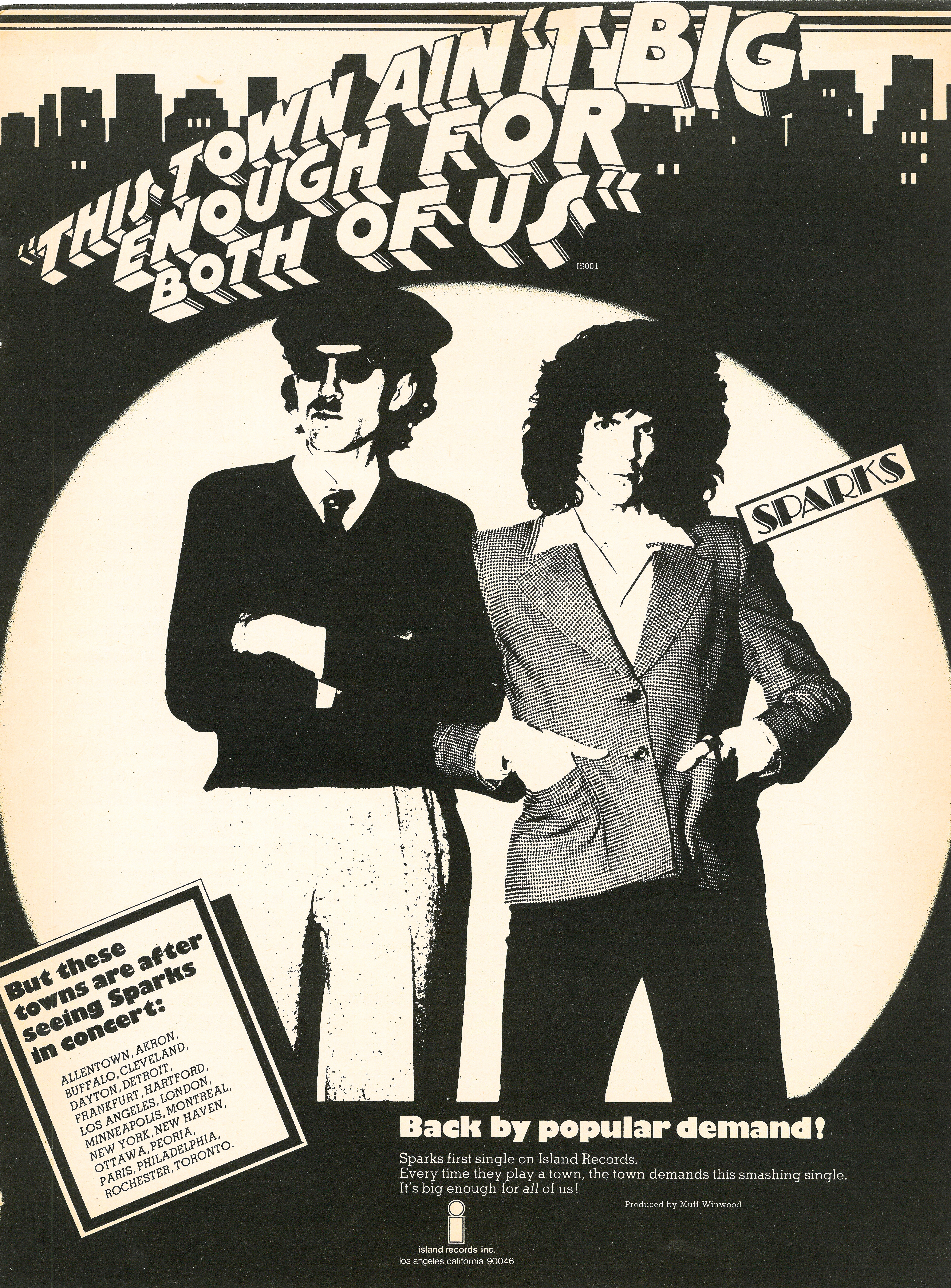 So Island went through all the proper things that apparently they were supposed to have done before. They later applied and we were allowed into the British Musicians’ Union. We applied a number of times and were constantly rejected; each time, the reason for being rejected was that we had been rejected the time before. And then finally, for some reason, we were graciously allowed to be members.

Wayne Bickerton, along with his future songwriting and producer partner Tony Waddington wrote ‘Sugar Baby Love’, originally intended as a Eurovision Song Contest entry (where it would have lost to Abba’s ‘Waterloo’) and then offered to Showaddywaddy. When they turned it down, Bickerton & Wadington went back to the session-musicians who’d been on the original demo and asked them if they wanted to form a band. They did and The Rubettes were born.

When ‘Sugar Baby Love’ was released, it was out for four months, five months, whatever it was, and it was just ticking over, and in fact it was about to be taken off the playlist, so it would have died maybe. And then we got Top of the Pops by default: Sparks were over to do ‘This Town Ain’t Big Enough For Both of Us’, and they didn’t have a work permit so they got pulled off Top of the Pops. They needed a band very quickly, and hence we had two days to prepare. I was in Marquee studios working on someone else’s record and I got the phone call. We all met up, we re-recorded the track, we spent the whole of that night working on a routine and next day we went and bought clothes for an image.

We did Top of the Pops and two or three weeks later it was #1. We ended up doing Top of the Pops seven times on the trot, I think – they called us the resident band at one time. And I like to think that us appearing and our image and portrayal of that song just helped a little bit in making it a hit.

We got a phone call around four o’clock in the afternoon from Robin Nash’s assistant; there had been a work permit problem with the American band, Sparks, and would you like to do Top of the Pops? Of course. Total panic: white hat-buying time, get the band, blah-di-blah-di-blah. We had done the backing track at Polydor studios in the hope that we were going to get Top of the Pops, all kosher, all done, all signed-up.

When I got down to Top of the Pops, I had missed Don Smith [Musicians’ Union representative] by twenty minutes and Robin said, ‘I’m sorry, you have a terrible problem; Don Smith says that as far as he’s concerned nobody ever did the backing track.’ We were under threat for about an hour of being removed. Eventually it was sorted out, but I was soaked with sweat because one minute we were on, the next minute we were off.

A week or two weeks later they allowed us back on Top of the Pops and then the song was amazingly well received. But because ‘Sugar Baby Love’ was so popular also, we got to #2 instead of #1. Because of that snafu, that’s why we didn’t have a #1 at that time.