On July 3, 1973 Bowie performed his last ever live concert as Ziggy Stardust at England’s Hammersmith Odeon. The concert was filmed by D.A. Pennebaker. Here is my write-up about a showing of the film and an interesting talk afterwards by Suzi Ronson and Tony Zanetta.

On the second anniversary of Bowie’s passing (January 2018), Tony Zanetta and Suzi Ronson gave a long and fascinating talk following a screening of the D.A. Pennebaker film, The Rise and Fall of Ziggy Stardust and the Spiders from Mars. This was the notorious final concert in July 1973 at Hammersmith Odeon. The Ziggy film looks and sounds better than ever! *

The stage is dark, the focus is soft, and the camerawork shaky and evasive. Ziggy is visible in flickering moments, shrouded in mystery. He was definitely from the cosmos; surreal, seductive, with porcelain skin and unearthly mismatched eyes with an alien, yet alluring piercing stare. It was impossible to discern if he was for real, or if this was the most impeccable performance ever. The frenzied audience is ravenous! The more fleeting the images, the more we craved to see. It became an addiction – an obsession. It doesn’t take much to enrapture a thirteen-year-old, and this was over the top. The hype worked beautifully. Less is more.

The intro music was Beethoven’s Ninth, synthetically arranged by Wendy Carlos from A Clockwork Orange soundtrack. The scrolling credits with the performers’ names in lights, rolling across the marquee at the start of the film replicate those in the opening credits of Andy Warhol’s 1970 film, Trash.  (Jeff Beck joined in for an electrifying performance on two songs but refused to be included in the film). Ronson and Bowie’s interplay is unmatched. ‘Moonage Daydream’ is otherworldly. ‘Width of a Circle’ is never-ending bliss!

We grasped his hands and never let go. Then Ziggy was gone.

“This is the last show that we will ever do… Bye bye, we love you.”

But Bowie never left us.

Two members of Ziggy’s entourage demystified the legend tonight with their incredible stories.

Tony Zanetta elaborated upon his role in Andy Warhol’s play Pork(in which he played Warhol). David and his wife Angie loved the play when it ran in London in 1971. The long-haired folk singer (whose current album was Hunky Dory) and his wife befriended Tony and the cast from New York. They had always wanted to meet Warhol. Tony conveyed that the carnal nature of Pork and the sexual freedom and outrageousness of the Pork characters spoke volumes to Bowie. This tremendously influenced his pan-sexuality and role-playing when he became Ziggy Stardust.

(Leee, Zee and Cherry Vanilla gave a lecture regarding Pork’s influence on Glam Rock ‘Talk on the Wild Side’ at the Warhol museum in Philadelphia in January 2011)

Zee facilitated and witnessed Bowie’s first, very uncomfortable face-to-face meeting with Andy Warhol at the Factory upon his first visit to New York City in September 1971. The meeting was full of awkward silences. After the  pre-Ziggy long-haired folkie played his new record ‘Andy Warhol’ to a very cold reception, his idol had nothing much to say. David then performed a brief mime sequence for the prince of Pop Art, which also fell flat.

The only topic of conversation was his shoes. Despite Bowie’s long hair, floppy hat and baggy trousers, Warhol, formerly an illustrator of shoes for adverts only complimented his odd pair of yellow Mary Janes!

Zee related his tales as U.S. road manager and President of MainMan, Bowie’s ramshackle management company and their haphazard yet successful U.S. tours. There were amusing details of the record deal with RCA, perpetuating the illusion that Bowie was a big star before he was one, living in luxury on RCA’s tab, although the band really had no money. David’s manager, Tony Defries instilled his fearlessness into everyone around him. They made ridiculous demands to RCA, which were met with no questions asked. The Bowie machine was on a roll! MainMan staffers, Cherry Vanilla (PR) and the late Leee Black Childers (photographer / road manager) conjured up stories and generated interest ahead of the Bowie caravan in each town. Tony referred to MainMan as the MGM of Rock N’ Roll. Bowie had plans to turn many of his entourage into stars.

Due credit was given to Angela Bowie for encouraging and supporting David to take his look to the extreme – she even orchestrated many of his theatrics.  Performer Lindsay Kemp, Bowie’s mime teacher was also given the major kudos he deserves for Bowie’s theatricality and choreography.

Suzi Ronson shared her stories as Bowie’s hairdresser and wardrobe mistress on the Ziggy Stardust tours. David still had long blonde hair when he showed her different haircuts from a Japanese magazine (a Kabuki wig, and another women’s hairdo). She did the choppy cut, dyed it bright red and it flopped. Suzi had trouble getting it to stand up (there were no such hair products in the early 70s) until she discovered a dandruff treatment which sufficiently stiffened his hair.

Suzi relayed that Bowie’s band, The Spiders from Mars (which included her future husband Mick Ronson) had at first resisted wearing makeup onstage, but then warmed to it when they realized that girls liked them better in makeup. Suzi was humble when asked how much of a co-writer Mick was on Bowie’s music, saying that they were alone in the studio, so it is not really known for sure. But as a classical arranger and co-star, there was nobody better to suit Bowie’s needs. The decision to break up the band was due to the members wanting the same pay scale as professional pianist Mike Garson was earning (about 8x their salary).

Suzi was also asked about doing Lou Reed’s makeup. Bowie performed three songs at the Royal Festival Hall charity gig on 8 July 1972 with his idol, Lou Reed as guest. Later the same night, Lou performed at London’s King’s Cross Cinema. She said that Lou was very nervous backstage before his London performance, wearing the beautiful black velvet sequined ‘matador’ style suit that Angela Bowie had helped him pick out. He asked her to ‘do something’ with his hair, and she devised the pancake makeup and dark eyes. Photographer Mick Rock captured Reed’s famous Transformer album cover shot that evening.

Suzi rode with Mick Rock and Lou Reed the following night to see the infamous Iggy & the Stooges gig at King’s Cross Cinema. This was the night that the Raw Power album cover shot was taken. She remembers Iggy diving into the crowd and falling on his face.

The Ziggy film was shown in part before and after the Q&A but had to be stopped before the last two songs (the library was closing) as the talk had been way too interesting!

Thanks Suzi and Zee for a wonderful evening of legendary reminiscing.

* The 90-minute Ziggy Stardust concert film was shot at the inception of RCA’s Selecta Vision scheme (a video disc player which would be subsumed by the video age, as was their later invention, the LaserDisc). D.A. Pennebaker (now aged 92), the only filmmaker that Bowie’s management had known of at the time was called upon to shoot the Spiders final concert. In 1967, Pennebaker released his documentary film of Bob Dylan’s 1965 tour, Don’t Look Back. The opening sequence (sound-tracked to Dylan’s “Subterranean Homesick Blues” with Dylan throwing down cue cards, standing in an alleyway) was a precursor to music videos.

The film was actually rotoscoped (an animation technique which allows for special visual effect or placing the subject on various backgrounds, but this was not implemented in the final cut.

Years were spent in post-production due to difficulties with the sound mix.The first premier was at the Edinburgh Film Festival in August 1979. Prior to that, the 35 mm film was shown in a 16mm format in college towns in the USA. An edited 60-minute version was broadcast once in America on ABV-TV in October 1974. 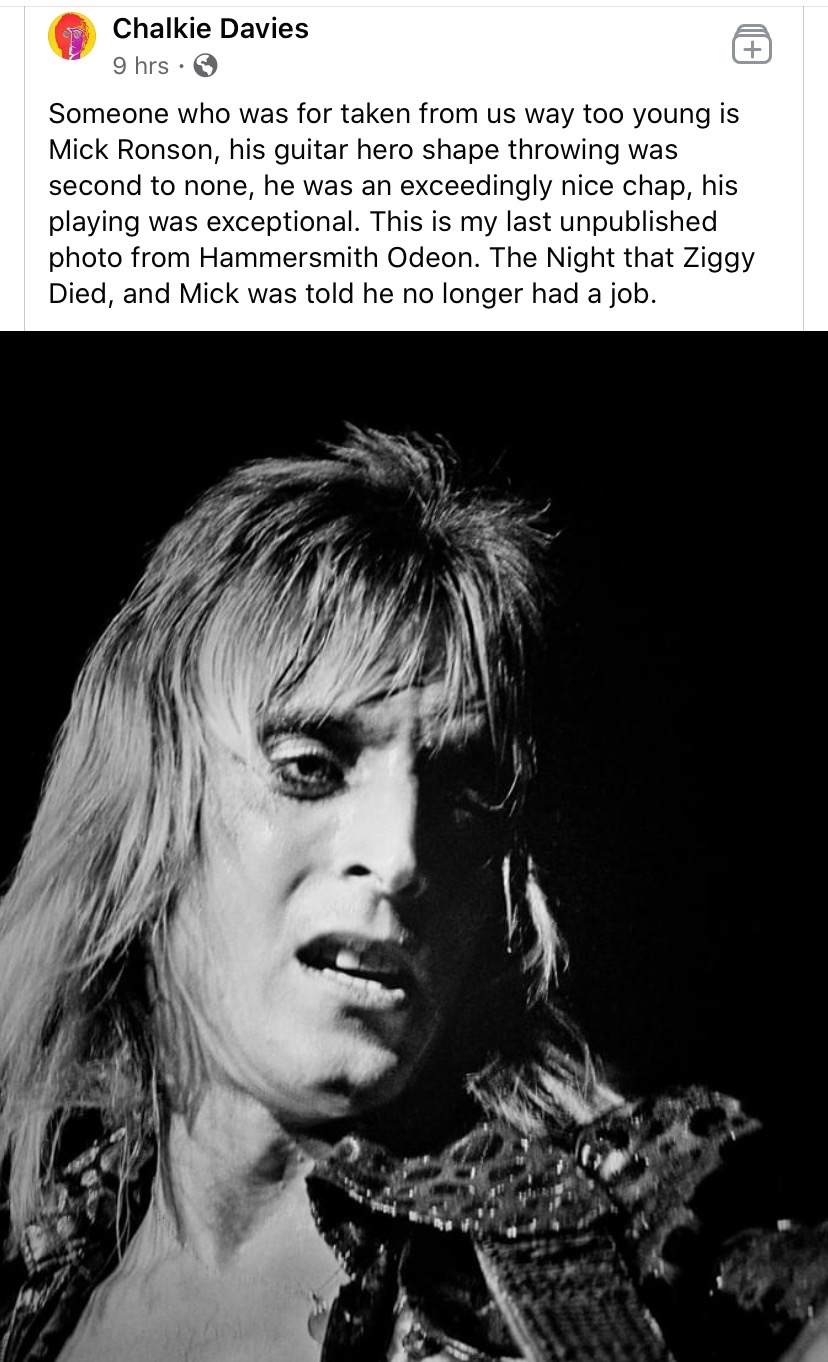 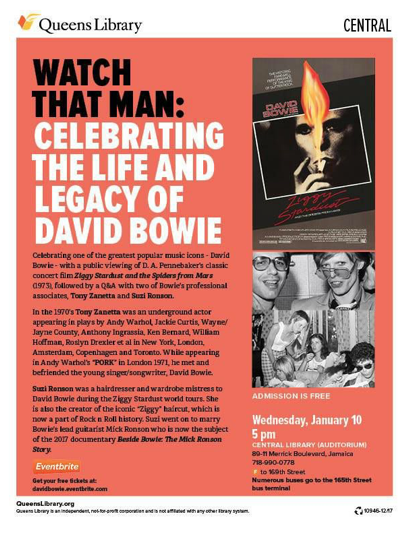