Yoko performed a gorgeous live version of her beautiful and intense song about the suffering of a young Hiroshima bombing victim, ‘Kurushi’ from her 1996 album Rising. The lyrics are completely in Japanese. At the Meltdown festival (Live at The Royal Festival Hall, London, 14 June 2009). Yoko told us the meaning of the song.

When I want to Hiroshima there were many many thousands and thousands of paper cranes all over. There’s a tradition that if you fold 1,000 paper cranes, then your wish will come true or something But it wasn’t 1,000 – it was 8,000/10,000. They said this is a monument to a very young girl who died after the Hiroshima bombing.

It was a very slow death and she kept calling her mother and they just felt very bad about her.

I was very touched about that and so I dedicated this song to her.

So it’s a very heavy word. It’s interesting that this girl kept saying ‘Kurushi’ when she was so young.

“Mother, ….I cannot breathe, there’s no way out I can’t do this it hurts.”

The story of Sadako and the Thousand Paper Cranes inspired three of Yoko’s songs.

The real-life Sadako, a young Hiroshima bombing victim was inspired by the Japanese legend that one who created a thousand origami cranes would be granted a wish. Her wish was simply to live.

In Japan there is a tradition of folding 1000 paper cranes to make a wish. The little girl dies before she is able to fold all 1000 cranes. I was particularly touched by that scene, and went into the studio.

I first recorded ‘Hiroshima Sky Is Always Blue,’ and realized that it was too long to be in a play. ‘Never mind,’ I thought. ‘I should just keep recording when I’m inspired.’

”I’m Dying’ was the second piece I recorded.

Kurushi, in Japanese, means something like ‘tormented,’ ‘pained’ and ‘suffocating.’ In fact, it’s a very Japanese word, and there is no exact translation in English.

When I was recording ‘Kurushi,’ I felt that the little girl was me. Then at one point I heard myself saying ‘Mommy. Mommy, I’m in pain.’ I couldn’t believe it. I’m still calling for my mother? Where did that come from? Then I remembered my son, Sean, crying ‘Mommy’ in the middle of the night when he was in pain. Probably that’s what we all do. But I haven’t called out to my mother for the longest time. In my mind’s eye, I saw a large projection of my mother’s face on a backdrop, while I, as a little girl, kept folding the paper crane. Mother was a projection. That’s why I gave up calling out to her. I thought. In the dark booth of the studio, I felt my soul-antenna reaching for her and touching only emptiness. It was sad, but it also made my head clear. I felt alright.

Then songs flooded into my head, and I kept writing and recording. The memory of being a young child in Japan during the second World War came back to me. I remember being called an American spy by other kids for not singing the Japanese National Anthem fast enough (it’s a slow song, but they suspected that I didn’t know the Anthem too well since I lived in the United States before the war). I remember the severe bombing in Tokyo, hiding in an air-raid shelter listening to the sound of the bombs coming closer and then going away, and feeling that my mother and I lived another day.

I remember when something that seemed like a piece of a B-52’s fuselage fell in our garden with the words ‘piss on you’ scribbled on it. I remember how Count T., my uncle and a Princeton graduate, laughingly said to my mother that he would not translate such a word in the presence of a lady. I remember sneaking into my father’s library and looking in the dictionary to find the word ‘piss,’ without success.

I remember being evacuated to the country; the food shortage, and starving; going to the next village to find rice for my brother and sister; being stoned by the village kids who hated people from the city; getting anaemic and being diagnosed as having pleurisy; being abused by a doctor, and having my appendix taken out without proper anaesthetics because of the shortage of medicine.

Then I realized that there was a striking similarity in what I went through then and what I am going through now. The city is a warzone. And I now have many friends around me who are facing slow death from AIDS. They are suffering low white blood cell counts exactly as the Hiroshima victims were. I am living amongst my suffering friends, listening to them talk about their fear of death, sometimes jokingly, and other times in anger. I live through their nightmares, not daring to voice my own.

The making of the album served as a purging of my anger, pain and fear. I hope it will for you, too.

Sadako and the Thousand Paper Cranes:

The story is a fictional retelling of the life of Sadako Sasaki at the time of the atomic bombing by the USA, Sadako was 2 years old when the atomic bomb was dropped on August 6, 1945 near her home n Hiroshima, Japan. She was at home when the explosion occurred, about one mile from Ground Zero. In November 1954 at age 12 she was diagnosed with leukemia from the radiation. (Her mother referred to it as “an atom bomb disease”). She was hospitalized on February 21, 1955 with one year to live.

Sadako’s friend told her to fold origami paper cranes in hope of making 1,000. She was inspired by the Japanese legend that one who created 1,000 origami cranes would be granted a wish. Her wish was simply to live. In the story, she managed to fold only 644 cranes before she died on 25 October 1955. Her friends and family helped finish her dream by folding the rest of the cranes, which were buried with Sadako.

However, the claim in the book that Sadako died before completing the 1000 cranes is not backed up by her surviving family members. According to her family, Sadako not only exceeded 644 cranes, she exceeded her goal and died having folded approximately 1,400 paper cranes. Her family donated Sadako’s cranes at places of importance around the world: in NYC at the 9-11 memorial, at Pearl Harbor, Hawaii, at Museum Of Tolerance on May 26 2016 and Japanese American National Museum.

After her death, Sadako’s friends raised funds to build a memorial to her and all children who had died from the effects of the atomic bomb. In 1958, a statue of Sadako holding a golden crane was unveiled in the Hiroshima Peace Memorial in Hiroshima Peace Park.

At the foot of the statue is a plaque that reads: “This is our cry. This is our prayer. Peace on Earth.” Every year on Obon Day, which is a holiday in Japan to remember the departed spirits of one’s ancestors, thousands of people leave paper cranes near the statue. A paper crane database is online for contributors to leave a message of peace.

© Madeline Bocaro 2018. No part of the materials available through http://www.madelinex.com may be copied, photocopied, reproduced, translated or reduced to any electronic medium or machine-readable form, in whole or in part, without prior written consent Madeline Bocaro. Any other reproduction in any form without the permission of Madeline Bocaro is prohibited. All materials contained on this site are protected by United States copyright law and may not be reproduced, distributed, transmitted, displayed, published or broadcast without the prior written permission of Madeline Bocaro. 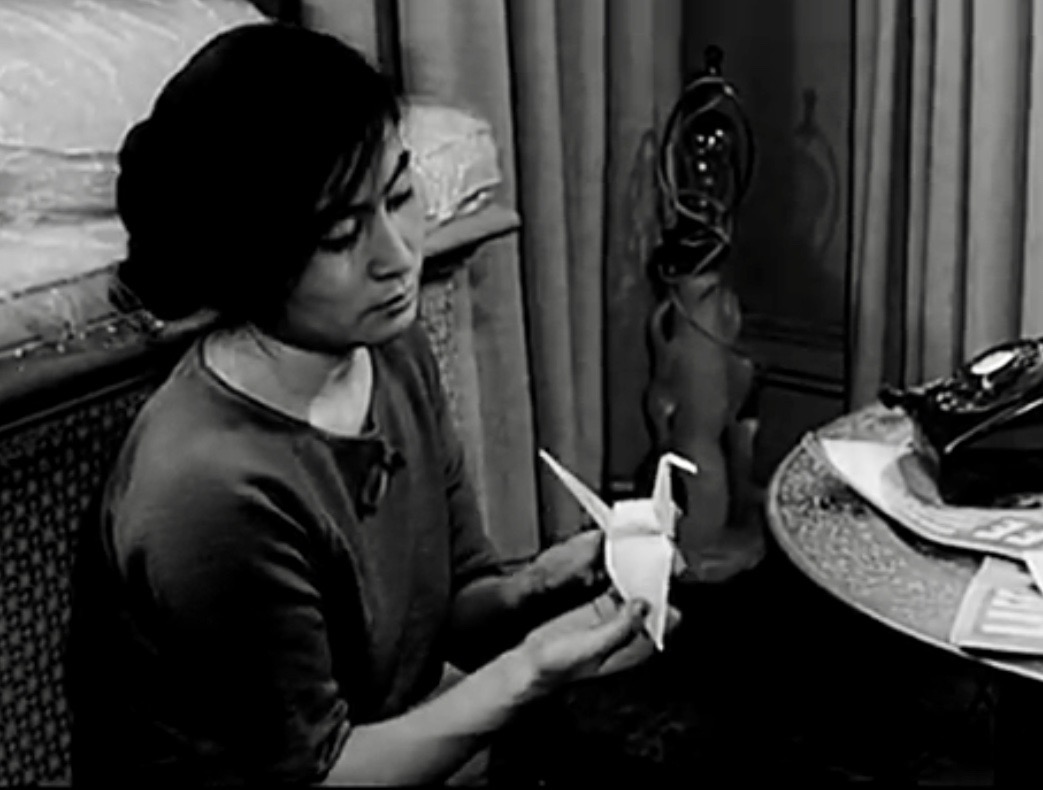