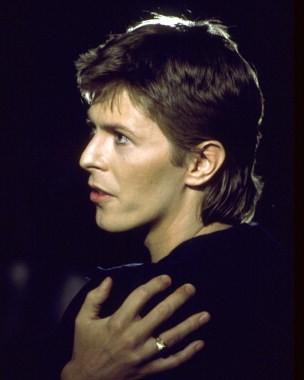 That was RCA’s slogan for Bowie’s “Heroes” album. The single was released on September 23, 1977. The album followed on October 14th. The single, amidst a backdrop of punk rock and Disco peaked at No. 24 in Britain. It didn’t even make the Top 100 in America. The week after Bowie’s passing in January 2016, the song hit No. 12 in the UK.

Another RCA ad for the album was:

“Tomorrow belongs to those who can hear it coming.”

Tomorrow belonged to us.

Bowie’s “Heroes” is one of the most poignant songs of all time.  The song was written “In Berlin, by the wall” – a setting right out of a Lou Reed song. It was originally an instrumental. The title references the 1975 song “Hero” by the German band Neu. The song’s motorik beat was pioneered by the drummer of another German band, Can (Jaki Liebezeit). Yet Bowie utilizes the beat as though he is playing the Velvet Underground’s “I’m Waiting for the Man”. The result is dreamy, floating, whirring and ethereal.

The song is set in the east, isolated behind the Berlin wall. At first David’s sings quietly in a low key. He is dejected, suffocated by the wall, dreaming of rising above, of swimming away, of stealing time – ‘just for one day.’ 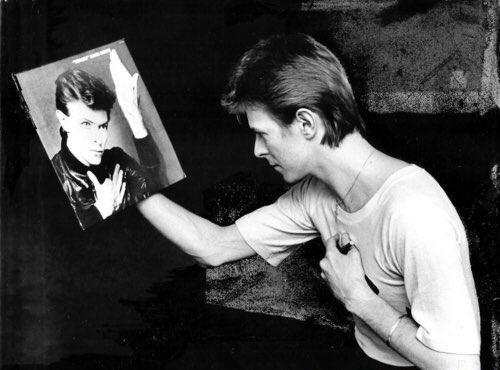 The album version starts with lines borrowed from the 17th century English nursery rhyme ‘Lavender’s Blue’ which David sang live – including the ‘dilly dillys’ – as an introductory verse to ‘Heroes.’

And you, you will be queen”

“I, I wish you could swim

Mid-song as the music swells, there is an octave jump (an uplifting effect also used in another tune of escapism, “Over the Rainbow” which Bowie previously referenced in “Starman”). As the verses build, Bowie’s voice becomes increasingly frantic, shouting, defiant, victorious!

“We can beat them forever and ever”

The song makes us feel sublime, fearless and triumphant – but ‘Heroes’ is really a heartbreaking love song. It is an unyielding yet impossible vow to be together with the person you love, amidst oppression, obstacles and the transience of love, of time and of place. This verse was inspired when David saw the Otto Mueller painting hanging in Die Brücke Museum, Liebespaar Zwischen Gartenmauern (Lovers Between Garden Walls), as well as when he saw producer Tony Visconti illicitly kissing a woman at the wall outside the studio window. 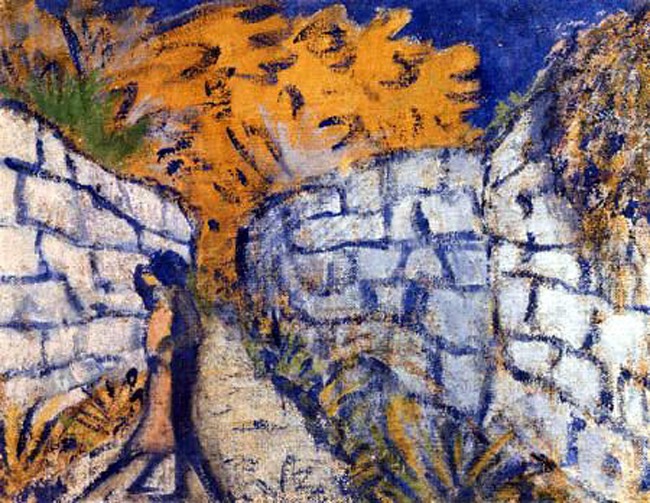 “I, I can remember

Standing by the wall

The guns shot above our heads

And we kissed as though nothing could fall”

Then, due to his unfulfilled yearning, our spirited singer is consumed by self-doubt. He revisits mortality, bleak reality and endless oppression in the last verse. His infinite timeline of ‘forever and ever’ is conceded to ‘just for one day’.

“We’re nothing, and nothing will help us

Maybe we’re lying, then you better not stay

But we could be safer, just for one day.”

The defeating line ‘we can be us’ suggest that as lovers or as a people, we remain puppets of war, of governments and victims of our own making, despite our delusions of grandeur.

A stunning black and white Sukita photograph of Bowie in a pose inspired by the paintings of Egon Schiele grace the now iconic cover, with the album title in quotation marks, deflating the word “Heroes”.

With Brian Eno’s EMS synthesizer and his Oblique Strategies for guidance, the dazzling warped guitar wails of Robert Fripp’s guitar and incredible production tricks by Tony Visconti, ‘Heroes’ is a unique song (and album) even by Bowie standards. The rest of the band were Dennis Davis, Carlos Alomar and George Murray (the D.A.M. Trio who also graced Bowie’s albums Station To Station and Low).

Thirty years ago in the June 1987, Bowie played as part of the “Concert for Berlin,” a three-day open-air festival staged in front of the burned Reichstag building. The stage was right in front of the Berlin Wall. Bowie acknowledged the thousands of young East Berliners behind the Wall, who were brutalized by police while listening to the ‘decadent’ rock concert in the west. When he performed the song “Heroes”, he was in tears. Two years later, both the Communist GDR and the Wall would be history. At the time of Bowie’s passing in 2016, the German Foreign Office tweeted: ‘Thank you for helping to bring down the wall.’

We did it in Berlin last year as well and there’s no other city I can do that song in now that comes close to how it’s received. This time, what was so fantastic is that the audience – it was the Max Schmeling Halle, which holds about ten to fifteen thousand – half the audience had been in East Berlin that time way before. So now I was face to face with the people I had been singing it to all those years ago. And we were all singing it together. Again, it was powerful. Things like that really give you a sense of what performance can do. – Bowie Sept. 2003 – NYC (to Bill DeMain)

(And about the dolphins…)

“…The tattoo on the back of my leg was done in Japan (1991), as a confirmation of the love I feel for my wife and my knowledge of the power of life itself…but it does have a dolphin and a Japanese variation of the Serenity prayer among the content. I drew it myself and then had one of Japans tattooists ink it for me…The dolphin has always had a real significance for me. The dolphin reference came from a book I had read many, many years ago called ‘A Grave For A Dolphin.’ A young European traveler finds himself stranded in an African village situated near the sea. By day he befriends a dolphin, and at night, falls in love with a beautiful but elusive girl who, he presumes, comes from the village. In short, the girl disappears one night and the next morning he finds the dolphin has dragged itself across the sand and up to his hut to peacefully die.

I found the story so very beautiful that it stayed with me all of my life. Shortly after Iman and I met I was flabbergasted one day when she told me, ” Hey, I’ve been sent a script for this beautiful story called ‘A Grave For A Dolphin. They want me to play a native girl and they want you to play the European guy who falls in love with her.’ I told her how much that book had meant to me and how it had partially inspired ‘Heroes.’ Where do they want to shoot it? I asked. ‘ Well, it looks like it’ll be in the Seychelles, but if there hadn’t been so much fighting they would have preferred the original location. The book, apparently all takes place on the coast of…Somalia. For one reason or another the film never got off the ground, but four or five years later I managed to track down a first edition and gave it to my love as a birthday present.”