The third track on Side One (Side White) is Brian May’s song ‘White Queen’. The song was written at the time of his pre-Queen band, Smile. The alternatively soft and powerful ballad ‘White Queen (As it Began)’ occurs in a seemingly medieval setting. May’s guitar lines are simply regal. Freddie Mercury sweetly sings of the quest to find the innocent, virtuous and virginal White Queen. The song is imbued with a Shakespearian quality, as the final lyric ‘And so it ends, as it began’is from Romeo and Juliet.

The journey to find the White Queen begins and ends in sorrow. The basis of the song lies in an experience in Brian’s youth, when he took a liking to a blind girl. This is evident in the lyrics about her sad, smiling dark eyes and in the line, ‘So sad my eyes/she cannot see’.

Freddie Mercury’s epic of decadent darkness ‘March of the Black Queen’appears on Side Two (Side Black) of the album. The song is likely the prototype for ‘Bohemian Rhapsody’ which would appear two albums later in 1975 on A Night at the Opera. The evil Black Queen has followers, takes prisoners and degrades them.

After seeing a drag show a few years ago, during which a gigantic and outrageous black drag queen sang ‘March of the Black Queen’ it occurred to me that this song was much more than I had imagined. The line, ‘I’m lord of all darkness, I’m Queen of the night’ suggested that the Black Queen was not female. But then, “She’s vulgar ‘buse and vile/ Fie-fo the Black Queen, tattoos all her pies /She boils and she bakes, and she never dots her “I’s / She’s our leader” caused our young minds to think she was a woman. Now we know that the term ‘she’ is preferred by most drag queens.

Beside the duality of good vs. evil, Freddie’s ‘March of the Black Queen is the complete opposite of Brian’s ‘White Queen’. Not only is the Black Queen not female, but she is also not Caucasian. There is a peculiar use of the ‘N’ word in reference to sugar babies and also the phrase, ‘honey-chile’.

The song deceivingly begins quietly and acoustically before its bombastic operatic progression. It also returns to an angelic baroque passage about our conscious choices of good vs. evil which Freddie delivers in his most beautiful voice. Then the march continues, taking place in a weird den of inequity in a fantastical time and place – a land of lily-pools and blue powder monkeys, cellar dwelling prisoners and naughty boys. There is a chorus of good, reminding the singer that he is in essence an angel, yet he succumbs to the Black Queen and joins the mindless march in the darkness, dancing with the devil.

How did thee fare, what have thee seen
The mother of the willow green
I call her name
And ‘neath her window have I stayed
I loved the footsteps that she made
And when she came
White Queen how my heart did ache
And dry my lips no word would make
So still I wait

My Goddess, hear my darkest fear
I speak too late
It’s for evermore that I wait

‘March of the Black Queen’

Put them in the cellar with the naughty boys
A little nigger sugar then a rub-a-dub-a baby oil
(aah aah) black on (aah aah), black on every finger nail and toe
We’ve only begun – begun
Make this, make that, keep making all that noise
March to the Black Queen
Now I’ve got a belly-full
You can be my sugar-baby, you can be my honey-chile, yes

Aah ah aah
La la la la laa
Ah ah ah ah aah
Ah la la la laa
I reign with my left hand, I rule with my right
I’m lord of all darkness, I’m Queen of the night
I’ve got the power – now do the march of the Black Queen
My life is in your hands, I’ll fo and I’ll fie
I’ll be what you make me, I’ll do what you like
I’ll be a bad boy – I’ll be your bad boy – I’ll do the march of the Black Queen 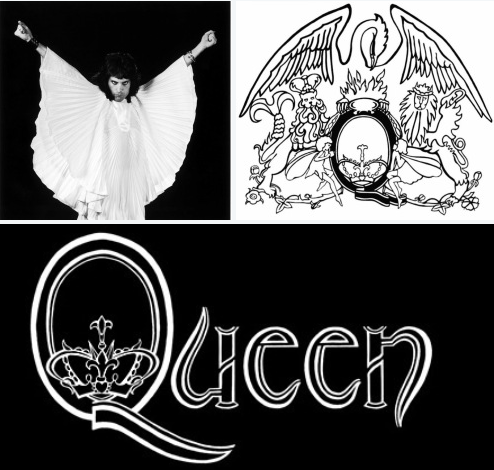