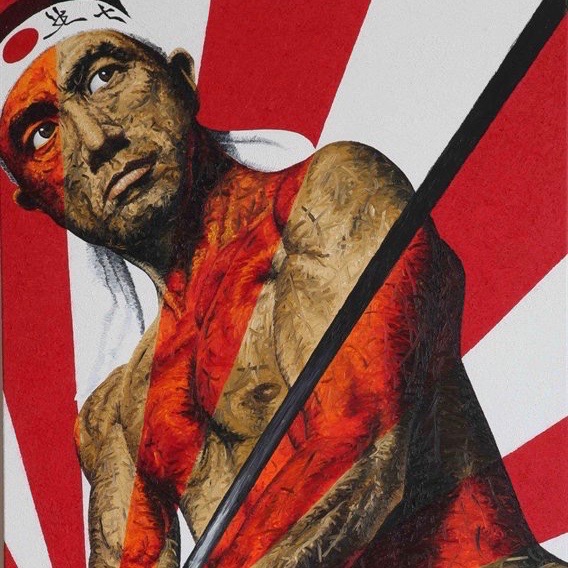 He was born Kimitake Haraoka, a delicate boy (bullied in school) raised in isolation and exposed to the arts and culture by his highly over-protective grandmother.

Mishima lived by the code of the Samurai spirit. He transformed his frail stature through  body-building. Portrayal of his homosexuality was restricted by his wife in biographies and in the cinematic interpretation of his life – but anyone familiar with his works was not in the dark about this.

At age 45 Mishima staged a military coup with members of a private army that he had assembled. He committed ritual suicide by seppuku (切腹, ‘cutting belly’) on Nov. 25, 1970 in the prime of his physical fitness. This was the culmination of his psychological nihilism, incorporating his conservative views and a lifelong denouncement of Japan’s postwar decadence and influence of the West. His mission was to restore purity to Japan, not unlike Robert DeNiro’s character Travis Bickle’s quest to right the wrongs of New York City in the film Taxi Driver (1977).  It makes sense that the film about Mishima was directed by Paul Schrader, who co-wrote the screenplays for the Martin Scorcese films Taxi Driver and Raging Bull. (See below.)

Mishima had been Yoko Ono’s  school-mate at the elite Gakushūin Peers School when they were children, along with Emperor Hirohito’s two sons in 1946 – one of whom, Akihito is the reigning emperor. (He will abdicate in May 2019). 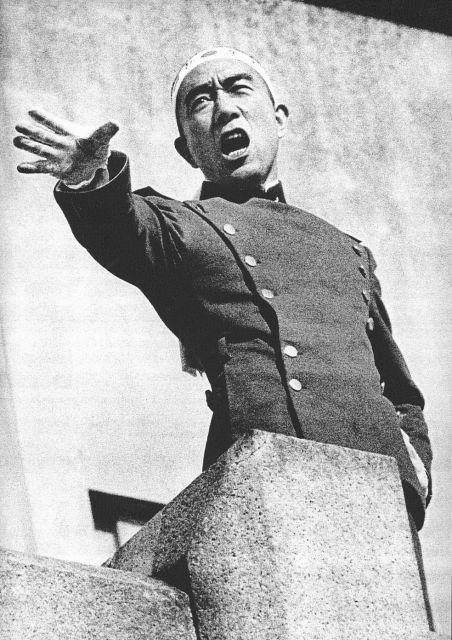 In 1950 in Kyoto (once Japan’s capital) a young Buddhist monk set fire to a beautiful ancient Zen temple (Kinkaku-ji) gilded in gold leaf. The national treasure was burned to the ground. The young man was deeply obsessed by its shimmering beauty which reflected brightly in Kyoko pond. He destroyed the temple so that its exceedingly beautiful image at that very moment could exist forever in his mind.

This actual event was the inspiration for Yukio Mishima’s 1959 novel (his most popular book) Temple of the Golden Pavillion (Kinkaku-ji).

Yoko referred to the story about the burning of Kinkaku-ji many times. It appealed to her because it mirrored her own conceptual art and ideas; imagining things to exist in your mind.

I want to deal with the world that is in subconscious.

That is where I am.

The only sound that exists to me is the sound of my mind.

My works are only to induce music of the mind in people.” 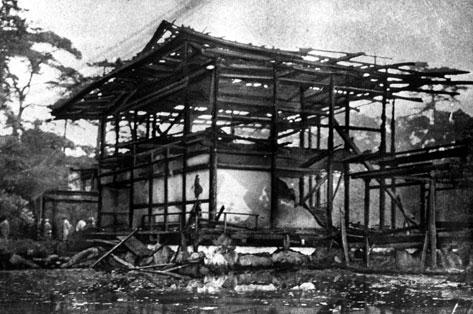 Yoko felt that in essence, John Lennon had implemented the story of Kinkaku-ji by “putting a stop to the Beatles before the Beatles deteriorated. Now the Beatles stay as a perfect myth and will never deteriorate.”

To eternally preserve his body in its prime, Mishima commissioned photographer Kishin Shinoyama to photograph him in various death poses, which Mishima meticulously staged  just prior to his scheduled suicide, invoking the Samurai spirit, yet completely surrendering to his nihilism. The book of photographs (with text by Mishima and Tadanori Yokoo) was not published until 2020.

At last, a book of Kishin Shinoyama’s photos of Mishima in various death poses has been published. The Death of a Man (OtokoNo Shi),  Rizzoli Press, Sept. 2020. Shinoyama photographed John Lennon and Yoko for their Double Fantasy/ Milk and Honey albums. 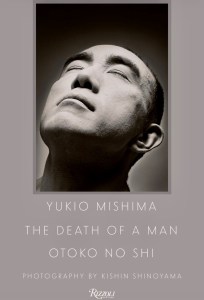 Yukio Mishima and Yoko Ono had the same honorable conviction to their art, as seen in these two quotations:

written with a splash of blood.”

Although she appreciated his work, Yoko found Mishima’s arrogant personality distasteful. However, they were peers – both retaining  a strong Japanese spirit. Mishima and Ono produced very important and lasting works, in essence using their blood.

However, their ethics about life itself greatly differed. Mishima died for his art, Yoko declared, “Art is life.” She lived life to the fullest, despite the immeasurable pain and numerous obstacles she faced throughout her life.

Yoko included Mishima in her work, We’re All Water – Tokyo Version (2006), an extensive row of bowls holding water, each with the name of a famous dead person (referencing Yoko’s song ‘We’re All Water’).

Here is a cool video montage with scenes from Paul Schrader’s gorgeous film, Mishima: A Life in Four Chapters (1985) – with a soundtrack of Yoko’s song ‘Walking On Thin Ice’. (The actual film score is by Phillip Glass.) It includes several clips from the Temple of the Golden Pavillion segment of the film. A new 4K restoration has just been made (2019) and shown at Japan Society in NYC this week.

Toshiro Mayuzumi, one of Japan’s most important classical electronic composers was Mishima’s close friend. He also opposed the Westernization of Japan and sympathized with the conservative views of Mishima. Mayuzumi composed the Kinkaku-ji score when Mishima’s book became a German opera, premiering in 1976 in Berlin. He dedicated the production’s 1995 debut to Mishima at the New York City Opera on the 25th anniversary of Mishima’s death. Mayuzumi passed away in April 1997.

Mayuzumi was also a colleague of Yoko Ono and her first husband, composer Toshi Ichiyanagi. Yoko created the artwork for Toshiro Mayuzumi’s 1958 album Nirvana-Symphonia. The music was based on the traditional Japanese sounds made by Buddhist temple bells. The cover image is a monochromatic version of a single cloud in the sky. It is similar to the cloud (and its lower left side positioning) photographed by Iain MacMillan which appears with a sky-blue background on John & Yoko’s 1969 album cover, Live Peace in Toronto.

The name of the monk who burned down Kinkaku-ji in 1950 was Shoken Hayashi. His reason was ‘To retaliate against the society’. Afterwards, he failed while trying to commit seppuku on a mountain. Hayashi received a seven-year prison sentence, where he died in 1956. Shoken’s mother drowned herself not long after her son burned the temple, as she could not deal with the shame.

Five years after the fire, Kinkaku-ji was rebuilt, starting in 1955. Later (in 1987 when Japan was very prosperous) 20 kilograms of gold (costing 7.4 billion yen) was applied to the façade of the temple, as the original builder Ashikaga Yoshimitusu had intended, but could not afford.

© Madeline Bocaro 2019. No part of these written materials a may be copied, photocopied, reproduced, reblogged, translated or reduced to any electronic medium or machine-readable form, in whole or in part, without prior written consent Madeline Bocaro. Any other reproduction in any form without permission is prohibited. All materials contained on this site are protected by United States copyright law and may not be reproduced, distributed, transmitted, displayed, published or broadcast without prior written permission of Madeline Bocaro.

One thought on “Mishima”