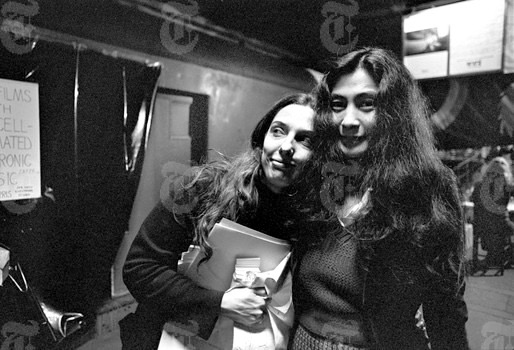 Madeline Charlotte Moorman played cello since the age of ten. She received her master’s degree  from Julliard in 1957. She was also a notable performance artist, proud of the fact that composer Edgar Varese called her “The Jeanne d’Arc of new music.”

Charlotte was a southern belle born in Little Rock, Arkansas on November 18, 1933. the same year as Yoko Ono. She succumbed to breast cancer at age 57 on November 8, 1991. All those who knew Charlotte spoke of her beauty, her amazing wit, incredible sense of humor, her generosity toward her colleagues and how deadly serious she was about her art.

After a brief time as a classical cellist with the American Symphony Orchestra, Charlotte’s career as an artist and promoter of the Avant-garde was kickstarted by her meeting in early 1961 with New York City impresario Norman Seaman, who promoted musicians and booked their performances. He assigned Charlotte to arrange and promote Works By Yoko Ono which included the second performance, Of a Grapefruit in the World of Park at Carnegie Recital Hall – Yoko’s first major solo concert, in which Moorman also performed on cello. She as listed as Yoko’s ‘personal manager’ in the concert programme. This led to great mutual respect and a lifetime friendship between the two female artists.

She also promoted Yoko’s first husband, composer Toshi Ichiyanagi’s concerts with Kenji Kobayashi, and his collaborations with John Cage and with Yoko. With Seaman as her mentor, Charlotte was off on a new path  as a networker and as a cutting-edge performance artist.

Through Kobayashi, Charlotte was turned on to contemporary composers Karl Stockhausen, David Tudor, Toshi Ichyanagi, La Monte Young and John Cage. Through Ono, Moorman was educated in avant-garde philosophy and the importance of the performances. Charlotte helped bring the new underground performers from Greenwich Village into more prestigious uptown concert halls. Many of them had taken John Cage’s course, Experimental Composition at the New School for Social Research in 1958. Later, in her recruitment of artists for her festivals, she began incorporating boundary-pushing artists in various mediums.

Her first introduction to Avant-Garde music was John Cage’s ‘26 Minutes, 1.1499 Seconds for a String Player’ in which the performer is instructed to cook and eat mushrooms.

As founder of the Annual Avant Garde Festival of New York, Charlotte led a never-ending campaign for new music and performance art. The series of fifteen festivals (the final one held in 1980) staged happenings and various forms of visual arts. They were held at odd locations; Grand Central Station, the Staten Island Ferry, the World Trade Center and at Shea Stadium where Charlotte performed on a flying trapeze. Karl Stockhausen performed at the second festival along with Nam June Paik. Some of the many performers over the years included jazz musicians Ornette Coleman, Cecil Taylor and Sun Ra, the artists Christo and Jon Hendricks, poet Allen Ginsberg, Yoko Ono, Alison Knowles, Dick Higgins, Joe Jones (who created the musical instruments for Yoko’s 1971 album Fly, and Yoko’s Japanese biographer Takahiko Iimura.

“For me, the Avant Garde Festival is her artwork. What she did was, she gave a platform for the Avant Garde artists…She was very naïve but wise. A lot of people would have probably perceived her as being very shrewd because she accomplished a lot. But it was  a very naïve beautiful loving force and that’s what kept her going.”

Moorman did not earn much money in her endeavors, relying on brief jobs playing in symphony orchestras in order to pay bills, and also on the donations of friends and colleagues.

Charlotte soon performed with John Cage and with founders of the Fluxus movement until she was inexplicably shunned by its founder, George Maciunas. Charlotte often collaborated with Nam June Paik, with whom she merged several art forms including performance and sculpture. For Charlotte, Paik created TV-Cello (1971) an electronic cello made with three stringed television sets (which emitted sounds of static as she bowed across it) and also TV Bra for Living Sculpture (1969) in which Charlotte was naked except for two small television sets attached to her breasts while she played the cello.

She did many performances of Yoko’s Cut Piece over the years, beginning in 1966.  She saved all the snipped pieces of clothing with the intention of presenting them to Yoko. All the material was still in Charlotte’s closet when she passed away. They were later exhibited in various museums.

Charlotte continued to perform Yoko Ono’s Cut Piece throughout her life as well.

She also performed Yoko’s Bag Piece, with Nam June Paik in 1966 – both of them giggling inside the bag.

Charlotte performed Otto Piene’s Sky Kiss – suspended by helium balloons. She had an ice cello (from which she actually got frostbite) and a chocolate cello (also covered in chocolate herself) both created by Tim McWilliams. One of her pieces had her playing cello under water. But mostly, she insisted on wearing elegant gowns for her performances as a cellist. 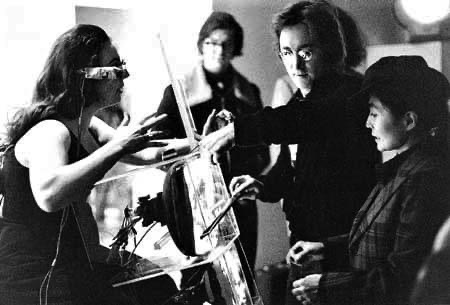 She appeared on American television shows in the 1960s/70s, hosted by Johnny Carson and Mike Douglas. Charlotte was mostly misunderstood and ridiculed, much in the way that Tiny Tim was treated on those same TV shows. However, she played along with their ignorance while maintaining her integrity. She has been described as chaotic and intense.

Charlotte and Yoko both presented themselves nude publicly as artists.  Yoko was unclothed by her audience during Cut Piece, and later appeared naked with John Lennon on the cover of their 1968 album Unfinished Music No. 1: Two Virgins. Charlotte became infamously known as the “Topless Cellist” after being arrested on-stage in February 1967 while performing Paik’s Opera Sextronique at New York City’s Film-Makers Cinematheque, co-founded by Jonas Mekas (which later became Anthology Film Archives). Charlotte made headlines when she was arrested during the second half of the performance. During the ludicrous trial, lawyers debated about whether nudity and sex constituted art, as the legalities of these issues were unprecedented.

On February 9, 1967 Charlotte performed Paik’s Opera Sextronique at New York City’s Film-Makers Cinematheque, co-founded by Jonas Mekas (which later became Anthology Film Archives), playing the cello while nude. Charlotte made the headlines when she was arrested during the second half of the performance. The charges of indecent exposure were later dropped.

In 2005, Yoko wrote the foreword to the Charlotte Moorman biography Topless Cellist by Joan Rothfuss, published in 2014. Her closing words were,

“Toward the end of her life, Charlotte performed Cut Piece on the roof somewhere. I didn’t go, but everybody went, including my son, Sean, There is a film of it, but I don’t want to see it and I never will. It’s too sad for me to watch. I want to remember us as the beatnik girls who had great fun in the ‘60s before we became such Queens.”

Moorman had been fighting a very long battle with breast cancer since the late 1970s. Despite intense pain and illness, she persevered with unbridled energy, performing throughout the 1980s and generously continuing to help other artists. In 1982, several months prior to her terminal cancer diagnosis, Charlotte performed two of Yoko’s pieces, Cut Piece and Mend Piece. During Cut Piece she revealed her mastectomy scars.  Mend Piece (breaking a vase into pieces – with audience members coming together again in ten years to repair it) was a for hopeful outcome which was not to be. The piece is based upon the Japanese concept Ichi-go ichi-e which means ‘one-time meeting’ – treasuring the unrepeatable nature of a moment, as in the  transience and chance of meeting a person in this lifetime.

Charlotte had delayed a biopsy as it would have interrupted her work schedule. She refused treatment and incorporated her slow death into her important work. She passed away on November 8, 1991 at age 57 in New York City. Her archives have been exhibited in museums at Northwestern University, New York University and at the  Museum der Moderne Salzburg.

In 1992, Yoko performed her own work Promise Piece at the Whitney Museum in a memorial tribute to her dear friend Charlotte.

10th – Dec. 9, 1973 @ Grand Central Station aboard 20 railroad cars. Yoko: F Art (a railroad car filled with empty boxes labeled with names of parts of her physical and psychic anatomy). Yoko also contributed an arrangement of mirrored crosses – 46 Reflections’ from Dawn to Knight; “This is a wish piece. Each time the sun hits a mirror, make a wish and it will come true”.

“The Beatles were fantastic. They left their mark.

But a hundred years from now, it’s Yoko Ono the world is going to remember

– not John Lennon or the Beatles.”

© Madeline Bocaro 2019. No part of this text may be copied, photocopied, reproduced, re-blogged, translated or reduced to any electronic medium or machine-readable form, in whole or in part, without prior written consent. Any other reproduction in any form without permission is prohibited. All text contained on this site is protected by United States copyright law and may not be reproduced, distributed, transmitted, displayed, published or broadcast without the written permission of Madeline Bocaro. 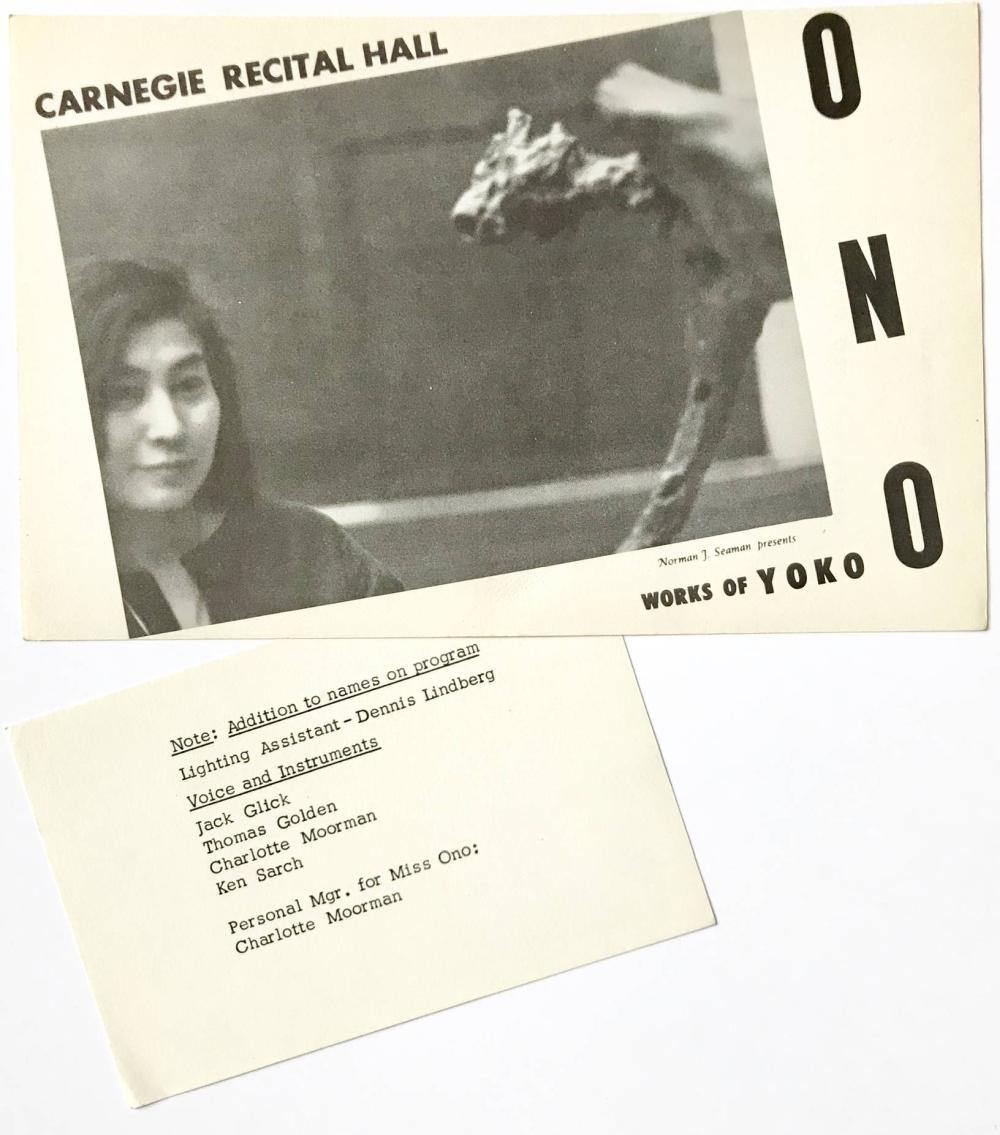 Charlotte’s Cut Piece dresses – installed in ‘A Feast of Astonishments’

10th– Dec. 9, 1973 @ Grand Central Station aboard 20 railroad cars. Yoko: F Art (a railroad car filled with empty boxes labeled with names of parts of her physical and psychic anatomy). Also, ’46 Reflections’ from Dawn to Knight, This is a wish piece. Each time the sun hits a mirror, make a wish and it will come true).

One thought on “Charlotte Moorman  ”