© Madeline Bocaro, 1979. No part of this site may be reproduced in whole or in part in any manner without permission of the copyright owner. 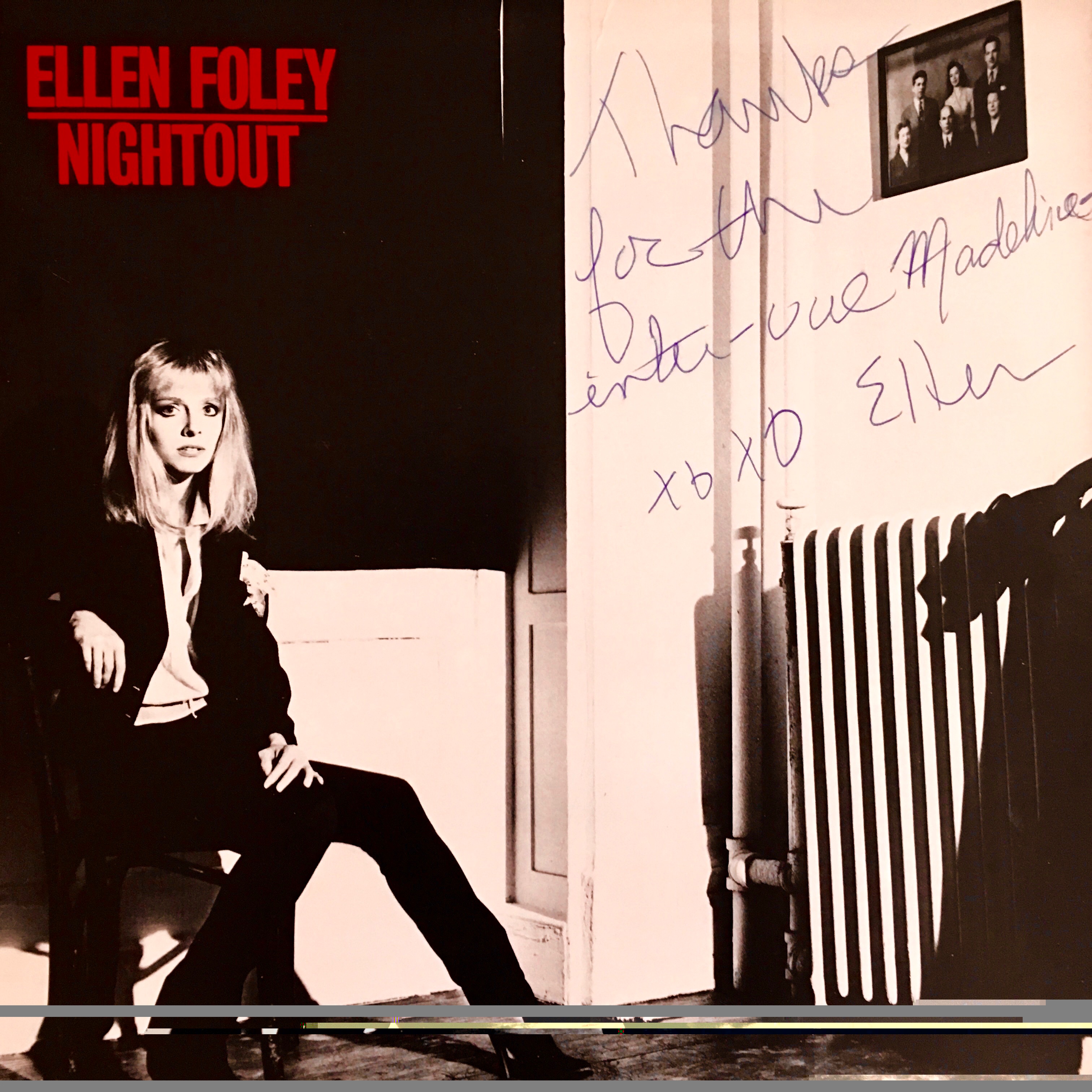 Ellen Foley is the powerhouse vocalist on Meatloaf’s Bat out of Hell album (1977). She especially shines on the song, Paradise by the Dashboard Light”.

So, STOP RIGHT THERE… and read my CMJ interview with Ellen all about her first solo album.

At Ellen Foley’s New York City apartment, I had the pleasure of meeting a small lady with a big voice and a bright future. When I noticed the Flying Lizards and David Bowie albums in her record collection, I knew we were on the same wavelength. Ellen was eager to talk about her background and her debut Epic LP, Nightout.

You live in New York now, is this permanent?

Why did you choose New York?
I wanted to be in show biz! I love New York. It inspires me to no end. I had to record here because I couldn’t see being anywhere else. There’s nowhere else I could go out in the middle of a session and breathe in and collect power from the air. I found out pretty young that I could sing ‘cause singing is such a physical thing. I knew it was the only thing that made me useful to the world, so I came here and started acting.

Did you get any acting jobs?

Oh yeah! I worked in the Catskills and off Broadway and off-off Broadway. I did the revival of Hair on Broadway and I sing “Black Boys” in the film. It was really exciting with Twyla Tharp’s choreography. I even met Meatloaf while acting. We were in the National Lampoon show together and so was Jim Steinman. He was writing all his songs at the time, back in ’75 or ’76.

Why didn’t you ever tour with Meatloaf?

I had the chance to do my own record, and that took time with demos and all. I knew if I toured in a position behind somebody else, it would take me awhile to get up front, so I just decided to take the direct route.

How did you choose the material for your album? Who is Philip Rambow, author of the title track?

He’s a Canadian guy who had a band called the Winkies and a friend of Mick Ronson’s. It was a fated meeting. I was working with Ronson, doing some pre-production and Phllip came into the country for one day. We met and he gave me those songs (“Night Out” and “Young Lust”). I never saw him again. Like Peter Pan coming through the window!

How about “Don’t’ Let Go”? Did Ian Hunter write it especially for you?

He had that song. He wanted to record it, but he couldn’t quite find a way to do it.

That song was such a great experience for me, the way it happened in the studio. I didn’t rehearse it much because I wanted to work on feeling, so it was done live. Tommy Mandel played piano and I sang. We did it once, and that was it. We sacrificed some technical things for emotional quality. I was crying through it. I mean like Ronson said, “a record should be a record of what’s happening at that very time, rather than a totally mechanized product.”

What brought you together with Ian and Mick?

My manager Steve Popovich. He’s great – a living legend himself. A real fanatic.

So I’ve heard. Are you satisfied with the production?

Well, we’ve had a few arguments here and there. On some of the rock n’ roll tracks, I like the mixes because it’s one total forceful sound. It’s like Jagger – he always mixes himself back so he’ll be part of the track, like another instrument.

Well, your voice is powerful enough so that you can do that.

Right, to make one forceful unit. I could have used a little less echo because I don’t need all that kinda stuff, but I’m really happy about the way it sounds.

I can hear Springsteen/Spector influences, but it’s a definitive Hunter/Ronson sound.

For the first song, “We Belong to the Night” which I co-wrote, I wasn’t thinking of anybody when I wrote it. It’s about the city, and about images, romance and desperation, and that kind of ties into the themes that Springsteen uses. Because the lyric has sort of an anthem quality, we wanted an anthem/epic sound, and the wall that we created can be compared to Spector.

Did you decide to do a Stones song beforehand?

I wanted to. I really did. I did that one (“Stupid Girl”) because I wanted to see the reaction I’d get. The fact is that people take things too seriously and I want to be able to laugh at myself and my ego and my vanity and see it in other people. I just wanted to get some attention. That’s why I’m here actually!

Have you heard Rachel Sweet’s re-recording of “Sad Song”?

I only heard her version one. I think our s was a little fuller sounding. Hers was sparser. She had extra verses and parts I’d never heard, and we got it off a demo.

Was the Meatloaf album you first recording experience?

Yeah! That’s the first record I was ever on. A pretty good start, you know? Sold a million records!

Well, you were lucky you knew him – it all depends on who you know.

Like the thing with Philip Rambow, that just happened, and I was with meatloaf and Steinman when it was all coming together.

You’ve sure got a lot of friends!

Yes I do! Fate has a lot to do with it too. I worry a lot about things turning out right, but I shouldn’t because it seems whatever’s gonna happen happens.

The guys in Ian Hunter’s band are also on your record.

Yeah. This band is so good they’re even recording a live album with Ian. They’ve become such a tight unit. By the way, I just did a few shows with Ian to get some visibility.

I was shocked when I first saw you on stage. I expected a big lady.

I sound different than I look, huh!

Will you be touring soon?
I’ll start rehearsing in November, as soon as Ian Hunter gets off the road. I’m going to use his band. I can’t wait because my background makes me really comfortable onstage.

You mentioned going to Europe.

Yes, in October, to do some promotion. I have a great PR firm over there and I’ll do some tv shows. They’re showing my film in Holland now (Ellen performing three of Ian Hunter’s songs with him and his band).

Where will you be touring first?
Well, I really want to play colleges, Canada and Europe. Places that aren’t jaded and are open to new things. If you play colleges, people really react.

Check out my new book: