Yoko returns to the Everson Museum in Syracuse with a new exhibition!

The exhibition will almost fill the full interior of the Everson and some outdoor space. The retrospective will feature works from Ono’s career up to the present, including works from her 1971 show.

Here is my look back at Yoko’s 1971 exhibition at the Everson:

‘This Is Not Here’ was the title of Yoko’s exhibition @ Everson Museum of Art, Syracuse, NY. It ran from October 9 (John Lennon’s 31st birthday) through October 21, 1971. It featured works by Yoko, John and several of their friends. 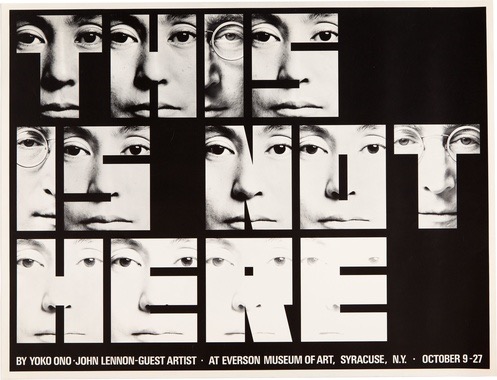 Yoko explained the origins of the exhibition’s title:

“I had a room in London, and the first room was extremely small, and there was this huge, huge some kind of closet – not exactly a closet but this huge thing was right in the middle of it and you couldn’t move it because it was so heavy. So I just put (a note on it saying) “This Is Not Here”. And then I thought “Wow, this is great… That’s how the instructions developed.”

‘This Is Not Here’ was also inscribed on a sign that Yoko created, which hung above the front door of John & Yoko’s home, Tittenhurst Park in Ascot.

“The reason we called the exhibition This Is Not Here was because I was trying to get across the idea that the art is in the people who come to see it. It’s like saying, ‘You’re important, not the objects.’ I’m not saying, ‘Come and look at these beautiful things on pedestals.’ I’m saying that whatever is important is in your head. It’s your reactions that count.”

The Everson exhibition was a major Fluxus related event and a semi-retrospective of Yoko’s career. It was filmed and televised. Six thousand people flocked to the museum on opening day – mostly due to rumors of a Beatles reunion. (There were only two Beatles in attendance; John and Ringo).

“The whole atmosphere was so festive and noisy that anybody who was seriously interested in my work would have had a hard time to find it even. I started to feel guilty that I wasn’t presenting Ringo, George and Paul. I felt discouraged from doing anything like that again. It just didn’t work.”

The exhibition invitation was an unfixed photograph. The image, time and date of the exhibition disappeared quickly upon opening – turning completely black. Only the phone number was remained visible.

The Everson building was designed by renowned architect I. M. Pei (who passed away at age 102 in May 2019). The building was constructed in 1968. On the 50th anniversary of the Everson Museum’s completion, it is also hosting an exhibition on Pei’s design and the institution’s history as a “monumental work of abstract sculpture and architecture.” Art Within Art: The Everson at 50 showcases archival materials and never-before-seen plans, photographs, and models of the project.

An interesting story about the museum building:

An 18″ X 24″ poster was designed by George Maciunas to promote Yoko Ono’s retrospective exhibition featuring John and Yoko’s faces within the letters of the exhibition’s title. The poster in my collection has an embossed Lennon-Ono Gallery stamp in the bottom right corner.

Catalogue
There is also a large format 12-page catalog (55 x 42 cm unopened) the same size as the poster with the same image on the cover, which includes listings of all the works on display, a map and Yoko’s writings and reviews. It also includes some of her conceptual film scores. The text consists of written works by Yoko. Design is credited to John Lennon & Peter Bendry (sic). Not credited was Fluxus master George Maciunas, who was instrumental in the exhibition design and several of the related publications and the poster.

Yoko’s works included Add Color paintings (visitors were invited to use provided supplies to create their own art). There were also several music performances and film screenings.

John and Yoko’s Dialogue Room featured pieces by the couple which complemented each other. Yoko’s Three Spoons was placed beside John’s Four Spoons. Yoko’s This Is Not Here plaque was hung next to John’s ‘You Are Here’.

Yoko’s Plexiglas sculpture AMAZE –  a transparent maze with a toilet at the center –was an homage to Duchamp’s urinal. (A telephone was subsequently placed a there in future exhibitions).

Yoko invited 120 participants to provide an object to which she would add water.  Many Fluxus artists contributed. Andy Warhol provided a film of a water cooler with a soundtrack of people talking. Indica gallery owner John Dunbar provided a tree. Assistant Dan Richter brought a cup of dry instant soup. George Maciunas supplied hydrogen and oxygen in pressurized tanks. Richard Hamilton contributed a plastic bag. Water Event has been re-created many times since, most recently at the Yoko Ono: Peace Is Power exhibition in Leipzig Germany (2019).

“It was a Zen joke, I thought. Jokes and laughter are very important elements in Zen. This particular joke is that I get all the containers from the artist to fill them with water, and the water I supply is conceptual. Meaning that I never fill them with actual water. I like that bit. It gave me a laugh right away, as soon as I thought of the idea. Then I knew it was a good piece.”

Elements published in conjunction with the exhibition by Yoko Ono with John Lennon titled This Is Not Here held at The Everson Museum of Art, Syracuse, NY, which opened on October 8 and 9 and continued through October 27, 1971. Grouping includes: 1. “Water Talk” instruction work / invitation “yoko ono with john lennon as guest artist will have a show titled this is not here to commence at Everson museum, Syracuse, NY on oct. 9, ’71 / yoko ono wishes to invite you to participate in a water event (one of the events taking place in the show) …” 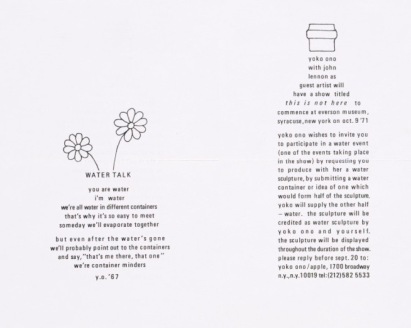 A conceptual film in This Is Not Here catalog:

A woman is having a tea party in a room. We never see others except the woman. She says You weren’t listening, were you. After that she says nothing for the whole film.

The film is basically about a room with many different time worlds in it. A clock is going fast like crazy. A sugar in a glass melts spasmodically. The woman’s dress deteriorates very fast. A car passing in the street, which is reflected in the woman’s eyes, going ever so slowly. A chair melts away like something made out of dust, etc. In the end, the telephone is the only thing remaining in the room. Everything else disappears with its own time rhythm.

The woman will have to be a Japanese woman with very good breasts. The scene has a peculiar mixture of a Japanese tea ceremony and an English tea party.

Yoko still had Tea Party on her mind in 1989

“I’m not getting that feeling like I gotta make a film- except for The Tea Party [the film script “Film No.7 (Tea Party)”]: for years I’ve been wanting to make that one, but because of the technical difficulties I don’t seem to be able to get it together. I think one of the reasons I’m not making more films is that I’ve done so many film scripts. I’d like to see one of them made by somebody else. Maybe one day out of the blue I’ll feel it so strongly that I’ll make a film myself again.”

Yoko Ono brings her art back to Syracuse, site of her first museum show 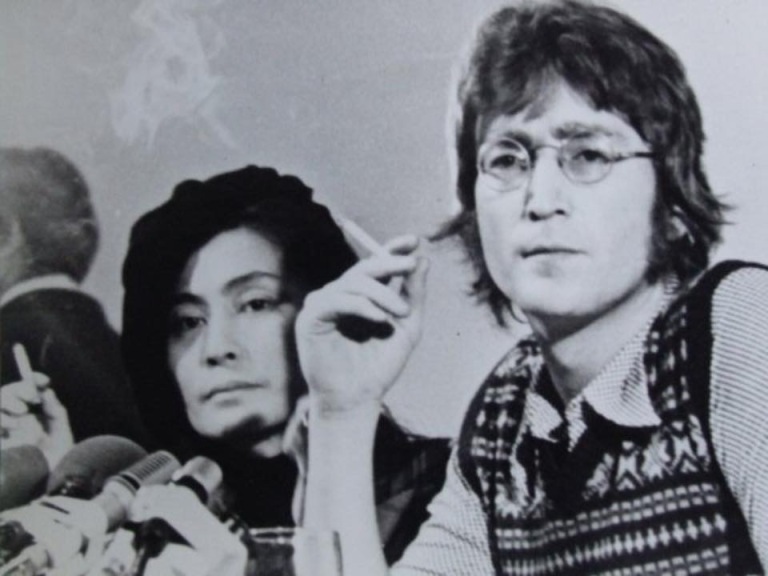 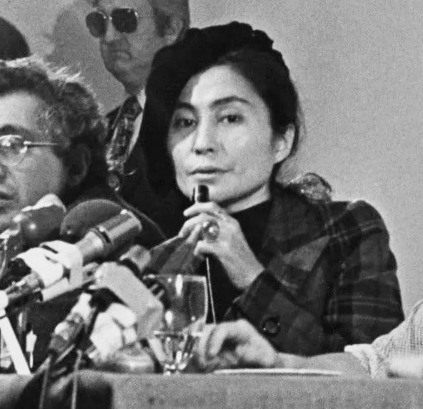 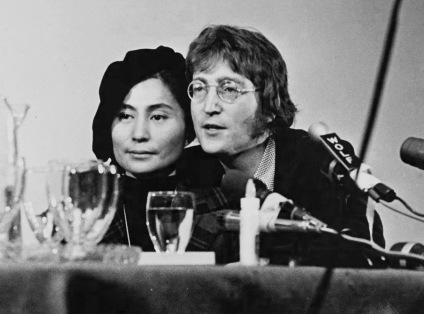 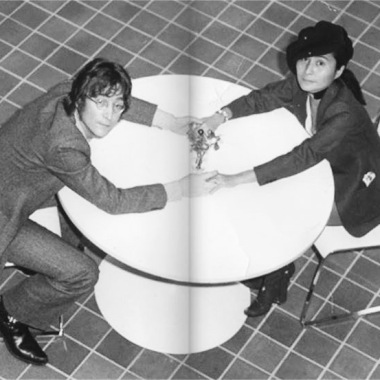 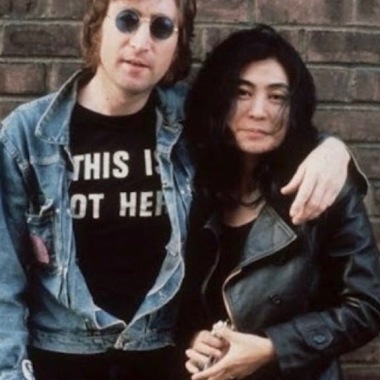 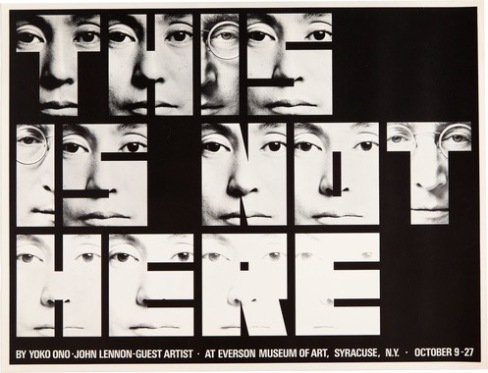 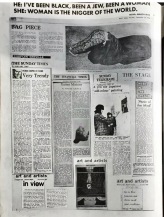 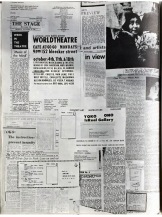 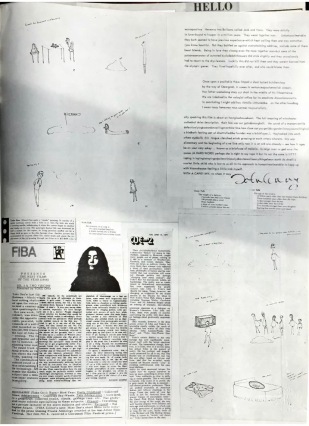 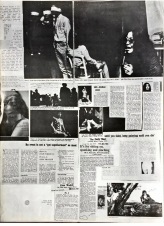 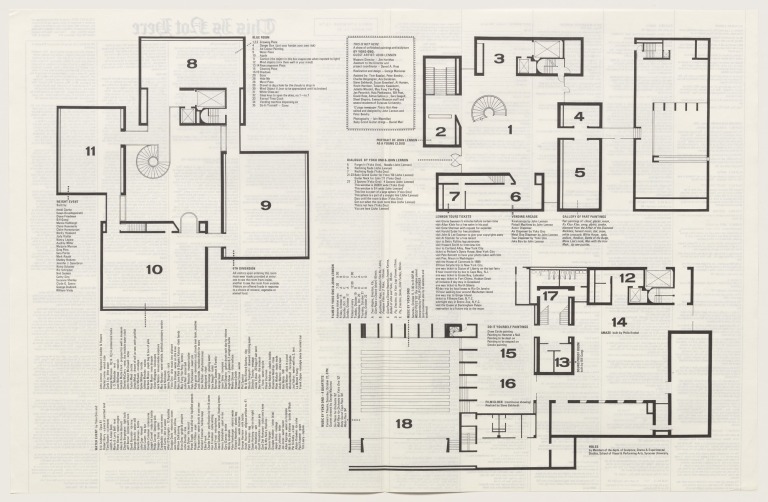