Lyrics and More by Iggy Pop

Although it looks pretty on the surface, there is no amount of time that will make all the WRONG in this book feel right! There are countless embarrassing mistakes in The Stooges (and Iggy Pop  solo) lyrics. This is especially distressing, as it is a book of lyrics – and NOT much more!  Ironically one of the few correct lyrics are to the song “Not Right”!

Perhaps it’s an untold game – find the incorrect words in almost every song! The most glaring one (for a head-start of 10 points) is Real low mind instead of Real O Mind in “Down on the Street.” More of these atrocities later…

Iggy obviously had nothing to do with the new book except for writing brief yet poetically poignant introductions to each decade. Every wise and eloquent word that Iggy has ever uttered should be compiled in a Bible-sized book – but here we only have wasted paper.

Here is Iggy’s beautifully succinct introduction about his art…

“These are the words that came to me. They came on foot, horseback, in an Eldorado, by motorcycle; staggering, gun to my head, gun in my belly, needle in my arm, joint in my mouth, pills in my bloodstream, but no matter how they got here, they did the fucking job. Here are prophecy, idiocy, an eye for detail and delusions of grandeur. Their burden is heavy, my brain hurts. But they are my pride and joy.”

Unfortunately, his choice of the word ‘idiocy’ describes the people who put this book together and twisted Iggy’s words. And now MY brain hurts! The transcribers must all be hard of hearing. There are so many retakes and versions of these songs that they could have easily referred to for the correct words.

Usually 3 to 4 song lyrics from each album are included, in some instances more. The choices seem random. There are odd choices like “Rich Bitch”. The most glaring omission is the most poetic song of all time… ‘Open Up and Bleed’!! (See the song index below).

There are lots of bold colors, splashy graphics and interesting fonts – but who needs graphics when you can have hundreds more pictures of Iggy & The Stooges!!! The lyrics chosen are not the most important. The photos are mediocre or obstructed by graphic design. Many more beautiful and interesting unpublished pictures exist! They have obviously not asked any fans to help with this book. We would have corrected all mistakes and made a much better publication. It was probably all put together by deaf teenage interns!

Photographers are credited by page number at the back (with no indication of time or place) but the page numbering doesn’t start until page 52 – and it’s intermittent. There’s a gorgeously insane photo on page number… Oh wait ,the page numbers haven’t started yet so I can’t tell you – but Iggy is lying upside down on the lap of an audience member, distorting his lips with his hand. So great!

In most cases the photos paired with the lyrics are NOT from the same year – or even the same decade! For example: A recently unearthed live at the Scala (1972) photo by Alec Byrne (although it is stunning) is paired with the song “1969”.

Instead of a nice Stooges photo with the lyrics to “I Wanna Be Your Dog” we have a vicious dog’s teeth. This is a completely WRONG image, as Iggy wants to be a sweet pet dog, not a vicious one

A blurb from photographer Glen Craig explaining his time living at the Fun House with The Stooges leads us to think there will be more of these longer anecdotes, but there are NOT.

“No Fun” has No Picture, as is the case with many of the lyric pages. Just bold graphics. More wasted paper which could have had precious band photos. Spot the inaccuracies here (no hints this time)! 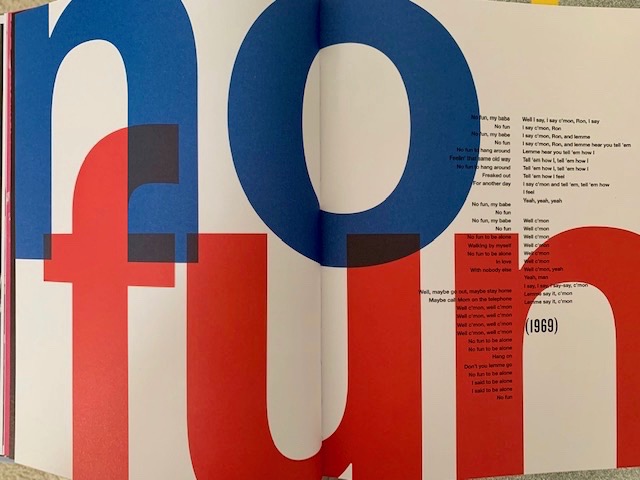 “Fun House” lyrics are paired with a badly printed dark contact sheet from a later date –  of Iggy and some Stooges @ Max’s with various upstarts including Lou Reed, Alice Cooper, David Johansen, Cyrinda Foxe, Jayne County and Jackie Curtis. A blurb from Danny Fields accompanies a frame of Iggy & Lou at Max’s on one of the rare occasions they met up. There are a few short blurbs from photographers whose included photos are not as iconic as other pros’, nor as captivating as those taken by fans – which could have been used. There are some blurry shots by Iggy’s German girlfriend Esther Friedman – a shame because she has taken much better photos. Debbie Harry’s contribution is three sentences about Iggy’s voice. Chris Stein contributes a paragraph about The Idiot tour in 1977.

On “Loose”, Iggy is no longer “Burning to you straight from hell” but “I’m putting it to you straight from hell.” Accompanying this semblance of lyrics, we get a real treat – an alternate photo from Cincinnati Pop by Tom Copi. Iggy is pointing his gloved finger downwards, and we see a clearer picture of the pre-smear peanut butter jar, still in the fan’s hand at Iggy’s feet – as he is carried by the crowd. This would soon become the best show prop of all time. You can almost read the label (I’m still trying to clarify if it was smooth or chunky!)

Then suddenly appears a misplaced double spread contact sheet of live shots from 1978. I don’t feel like counting the unnumbered pages to tell you which photographer took these. “TV Eye” and “Dirt” are illustrated in 2-page spreads with pretentious graphics and no photos. What a waste of paper!

Which brings us to Raw Power.  “Search and Destroy” is illustrated in the groovy Fun House font! This inaccuracy makes me so mad! “Gimme Danger” is paired with later live photos  at Rodney’s (August 1974) of Iggy bleeding from “Murder of a Virgin”.  “Your Pretty Face is Going to Hell” faces a picture of Iggy missing a tooth in 1980. Though it might be an apt description of Iggy’s unfortunate condition at the time – it is NOT appropriate to the time.

The funniest of all is “Gimme Some Skin” (1973). I don’t know where they got these lyrics. It’s unrecognizable! Perhaps it was translated by a foreigner or even by an alien! You must see this for yourself! And it’s paired with a 1976 photo of Iggy – blonde and in his trench coat. “Death Trip” is translated as “Said who with you, you’re with me (honey we’re going down in history). 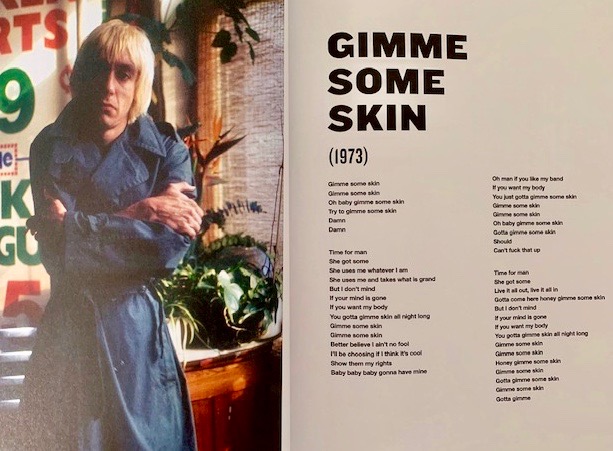 Also hilarious is “Penetration” which contains a made-up word, “Exetice”! (How many bonus points do we get for this one?) They actually included the word (“Gibberish”) at the end.

“Rich Bitch” includes Iggy’s scolding of the taunting crowd from Metallic KO – including “Get him out of here, he’s a prick!”

There is a confusing paragraph by someone named Will Self, citing the influence of ‘The Passenger’ “off of The Idiot”. WRONG ALBUM BUDDY!! The editors obviously have no idea either!

Iggy ushers in the 80s with his fitting words:

“ …And I, the last squirming pocket of filthy resistance. I saw it all coming, the whole cheap cancerous future…”

Six songs from Soldier, spread over ten pages seems excessive when (I repeat) there is NO trace of “Open Up and Bleed”!!

On ‘Play it Safe’ they’ve written “Slippin’ and sliding like Joe Algeto???!!!” instead of Joey Gallo!!!

I can’t stop laughing at the mistakes in “Cold Metal” “Grabbed tit by the railroad tracks” is now “Rag tent…”  “From the mall to the prisons”  is “From the morgue…”  AND, “From the bad to the brutal” is “from the bad to the Buddha!!” I racked up 40 points in the game on this song alone!!!

This excerpts a longer quote from Iggy. He comes out of the darkness at the end of it.

“ I have become an endangered species. My friends are doubtful, my enemies are hopeful…

The American Caesar version of “Louie Louie” is included when we’d much prefer the Metallic KO version. I’m happy that ‘Highway Song’ is included – it’s “The Passenger” Part 2 – a really nice song. It’s sweet that “Look Away” is here – about Sabel Starr and Johnny Thunders.

Iggy wraps up the 20th century:

“… The Lord rolled away the stone and I crawled out of my dark cave into the limelight of love and acceptance. Free pizza. Beloved Stooges reunited. Even evil Stooges reunited…”

Interesting that ‘Loneliness Road’ (2017) and ‘The Pure and the Damned’ are included. I love both of these – especially the latter. And finally, we have ‘Love’s Missing’ and ‘ The Dawn’ from the new album.

47 songs in all, but I’ll say it again, they DID NOT include “Open Up and Bleed”!!!! AND they have ignored  Turn Blue, Talking Snake, Pussy Walk, Sickness, Mask, Howl, Ugliness L.O.S.T., Nazi Girlfriend and countless other sublime Iggy/Stooges songs.

On the last page it indicates “Iggy Pop has asserted his right to be identified as the author of this work.” If he had read the book, he would not have agreed to this!

If you want to read a great Iggy/Stooges book get Paul Trynka’s Open Up and Bleed and/or Total Chaos with Iggy talking through the whole book- amazing photos too!

And HERE IT IS! – A great live version form April 2, 2013 in Sydney Australia

Open Up and Bleed

I been shoved too long

They even tried to buy my song

But it ain’t gonna be that way no more

I’ve been hurt I’ve been scared inside

I’ve even tried to fix and die

But I just couldn’t kick on through that door

Place your lovin’ arms around me

By fools who don’t know where it’s at

Now somebody’s gonna have to pay

Everybody just looks the other way

All the things a man can need

Don’t it make you, make you  wanna open up and bleed

Open up and bleed baby

I was wrong when I believed

The human race was human beings

I’m gonna laugh and have a ball

I’m gonna try to wipe my past away

Place your lovin’ arms around me

Everything a man can need

Don’t it make you, make you wanna

Open up and bleed.

7 ways to ease your pain

7 ways To lose your cool

You gotta open up and bleed

See my review of the book Total Chaos: