One sweet dream came true today. It’s 1969, we’re all back on Abbey Road and it’s the trip of a lifetime. Fifty years ago, this album marked the end of an era – The Beatles’ final recordings. However, it was far from the end. The music of John, Paul, George and Ringo resonates through the decades. Their incredible legacy is forever.

The 50th Anniversary release of the album topped the charts this week. It is now in The Guinness Book of World Records as the longest time period for an album to return to No. 1 in the U.K. – 49 years and 252 days – since the end of its 17 weeks at No. 1 in 1969/1970. Although the world is a much different place now, we still need The Beatles.

“Once there was a way to get back home…

How many places have you lived in the past fifty years? Whether it’s one or two or dozens, this soundtrack to our lives brings me right back to my childhood home – where I heard this masterpiece for the first time. Never did I think it could sound even more magical. The warmth and fidelity of our parents’ old-fashioned Victrolas or ‘Hi Fi’ systems served this up pretty well, but over the years our music mediums have dwindled – from radios, to cassettes on the Walkman, to compressed MP3s and streaming… taking the vibrations, warmth and intimacy of sound further away from us. Now The Beatles are here again – closer than ever before – and again on vinyl! The album was made at THEIR home, EMI Studios on Abbey Road. (The studio was re-named after the street).

There is so much breadth to The Beatles’ recordings that we could tune all the stereo knobs in different combinations to reveal single voices, instruments and other buried sounds. Producer George Martin’s son Giles, along with engineer Sam Okell made a respectful and amazing remix from the original 8 track session tapes, as was done on The Beatles (White Album) 50th Anniversary last year. Their final album was the only one recorded on eight tracks – using a transistorized mixing console. The new Abbey Road mix is the ultimate in equality – every vocal and instrumental sound is exceptionally audible and enchanting. We are taken through a time tunnel –  bringing the past into the future.

“The magic comes from the hands playing the instruments, the blend of the Beatles’ voices, the beauty of the arrangements. Our quest is simply to ensure everything sounds as fresh and hits you as hard as it would have on the day it was recorded.”

There was no need for any text or band name on the album cover. Everyone in the world knew the four beloved guys walking across the road. Even the Volkswagen Beetle became more popular because of its appearance in the background. (The actual car now resides at the Volkswagen Museum in Germany). 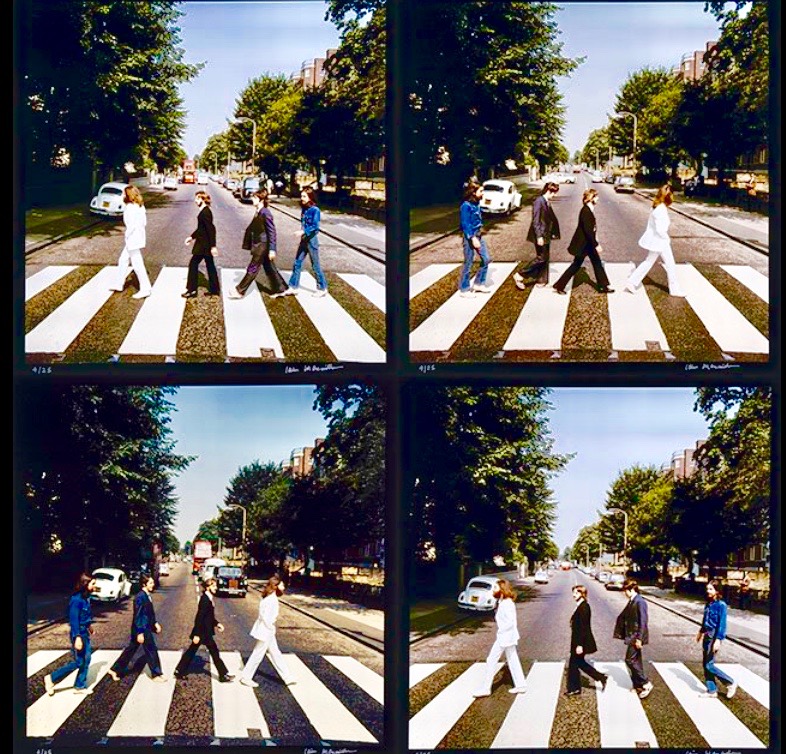 ‘Come Together’ sounds even groovier and funkier with more separation and dimension. John’s pure vocal is vibrant,  the throbbing bass and drums have extra punch. And still, it is faithful to the original mix.

‘Something’ brought George out of the shadows, directly to the top of the song-writing game with this beautifully scored piece that he had written a year prior, during the white album sessions. Now, more nuances of his song’s symphonic magnificence are unveiled. A gorgeous strings-only version is included io the super deluxe edition.

We can fully understand the importance, simplicity and beauty of Paul’s bass lines. How prescient of him to write a song about a student killer (‘Maxwell’s Silver Hammer’) who murders three people in one short song; a classmate, a teacher and the judge. We were fooled by the deceptive oom-pahs and a clanging anvil into thinking that this is a jolly little song. (It’s even more eerie since round one of the Manson Family murders occurred on the same evening of the album cover photo shoot). Now the tune sounds brighter and more uplifting (despite McCartney’s band-mates’ protests, calling it ‘granny music’).

The Doo-wop styled blues ‘Oh! Darling’ features Paul’s most sublime vocal performance on the album – and here it is revealed in all its splendor. John had wanted to sing this (he sings on a version with Paul on Anthology 3) but I’m glad that Paul sang it.

‘Octopus’s Garden’ is Ringo’s playful moment of fantasy and joy. His layered vocals and even the bubble sounds seem more realistic. This aquatic aria would have been more appropriate for the Yellow Submarine album (or on Spongebob Squarepants) but perhaps this frivolity is just a set-up to make John’s colossal following track even more of a contrast.

Lennon’s hypnotic blues ‘I Want You’ (She’s So Heavy)’ – an ode to his love Yoko Ono, is the most impressive and revealing track. Layers of dust are cleared from Billy Preston’s Hammond organ (especially on the bonus Trident session with a more scathing vocal by John). Billy’s stunning performance is revealed as he plays a swirling gothic gospel amidst John’s epic dark cavalcade with changing time signatures. It invokes the 1962 horror film soundtrack for Carnival of Souls. The whirling hissing vortex of paranormal white noise at the end of John’s extreme love song spits us out of the darkness – dazed and stumbling onto a field of sudden silence, which is quickly broken when we turn the record over.

Side two, track one: George’s ultra-crisp and jangly ‘Here Comes the Sun’ shines so brightly that you will need shades! This is his shining moment – it has gotten the most live streams of any song on the album and is the top streamed Beatles song in the U.K. The Moog synthesizer (which also creates the sonic tornado in John’s prior song) was brand new at the time. George owned one of the first few ever made. The synthesized sound which travels from left to right in headphones at the start now seems like a stunning new studio trick. The Moog is used sparingly throughout the album as a respected and tuneful instrument without over-indulging in the synth’s vast array of Sci-Fi noises.

This mix of ‘Because’ is otherworldly. The eerie, minor key harpsichord gives way to the crystal clarity of the three most familiar and compatibly harmonic voices on earth; John, Paul and George – in triplicate – to make nine. The faux horns of the Moog sound even brighter than actual instruments. They have a shimmer –  like plastic flowers that will never die. John’s poetic lyrics about natural elements; earth, wind, sky are influenced by Yoko’s incorporation of nature into her art and in her writings. John wrote the melody after hearing Yoko playing Beethoven’s ‘Moonlight Sonata’ on the piano.

‘The Long One’ (medley)  is simply stunning. It always seemed to be one long piece, but now we know that the band realized a fortunate synergy in these snippets of unfinished songs strung together in this symbiotic symphony. It begins with the purity of Paul’s singular voice and then his harmonizing on ‘You Never Give Me Your Money’ (about the managerial and financial mess the band was in at the time). We can clearly hear Ringo in the harmonies on this one!

The crickets (from a sound-effects record) on ‘Sun King’ come to life, as does Preston’s organ – before John’s Spanish style gibberish harmonies kick in. The multiple vocal layers of ‘Ahhhhhhhh… ’ are spiritually soothing, like a long calming ‘Ohm’.

We are jolted out of serenity upon the arrival of the dirty old ‘Mean Mr. Mustard’ and his plastic-wearing sister ‘Polythene Pam’. Lennon’s two degenerate characters balance Paul’s hammer-horror, Maxwell.

‘She Came in Through the Bathroom Window’ is another Paul showcase – his schematic about an exotic dancer and a cop, spawned from an actual event in which a fan entered his home through said window. The clarity of his bass and the backing harmonies are stellar.

The orchestral ‘Golden Slumbers’ is more majestic than ever. The lush lullaby speaks of home, enveloping me in dreams of my own childhood bedroom plastered with Beatles posters. This mix highlights the realm of gorgeous strings to stir up even more emotions. Paul’s soft and sweet vocal is calming as he sings, “Once there was a way to get back homeward…”  Then comes his uncharacteristic yet sincere snarling on this passionate lullaby. 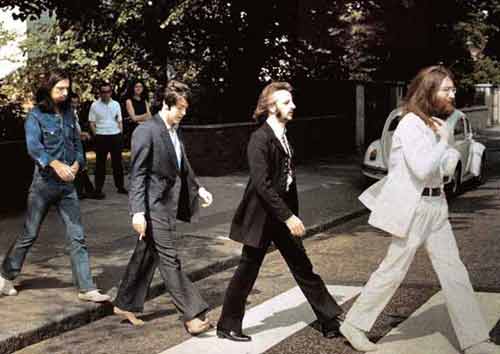 A strong chorus of Ringo(s) sings ‘Carry That Weight’ with its grand orchestral build-up. There are many more audible revelations here. Then, the reprised ‘You Never Give Me Your Money’ theme leads up to THE SOLOS, starting with Ringo’s economical yet brilliant (and now iconic) 15-second drum solo!

‘The End’ did not seem sad in 1969, as we didn’t know that the band was breaking up. They even released one more (previously recorded) album and film, Let It Be – keeping us in denial that it would all soon be over. Now the song stands as The Beatles’ mission statement:

It was always all about love.

‘Her Majesty’ lightens the mood after the epic medley. It’s a brief return to console us. This was actually a mistake. The short song had been cut out of its place in the medley and left at the end of the tape, where the band decided to leave it.

And it’s back to Side One, or in this case – on to the other three discs of alternate takes and demos… and the Blu Ray! I will leave that analysis to the technical experts. 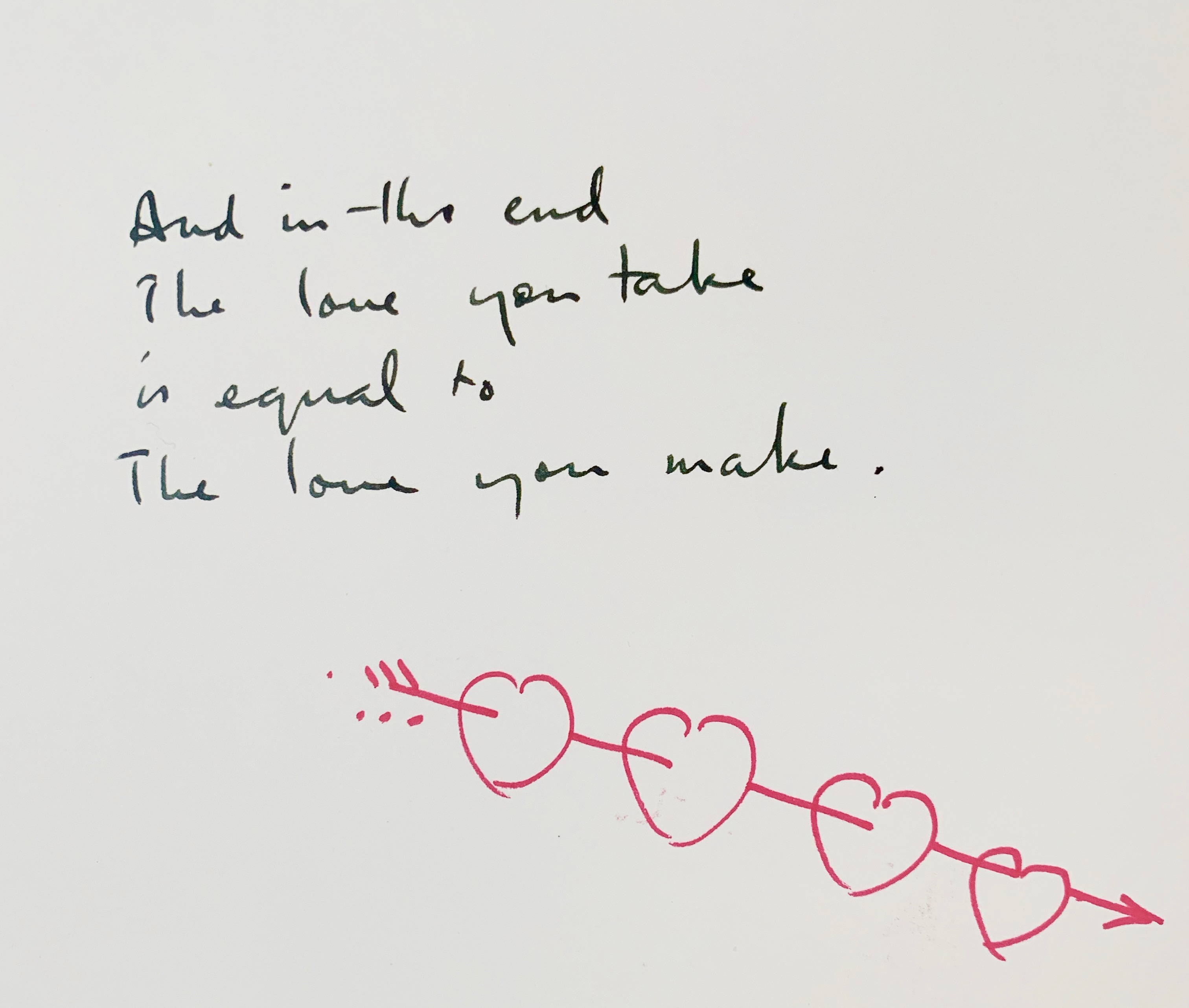 Highlights from the bonus discs:

‘Something’ (Take 39 / Instrumental / Strings Only)

Paul singing the demos for ‘Come and Get It’ (Badfinger) and ‘Goodbye’ (Mary Hopkin). 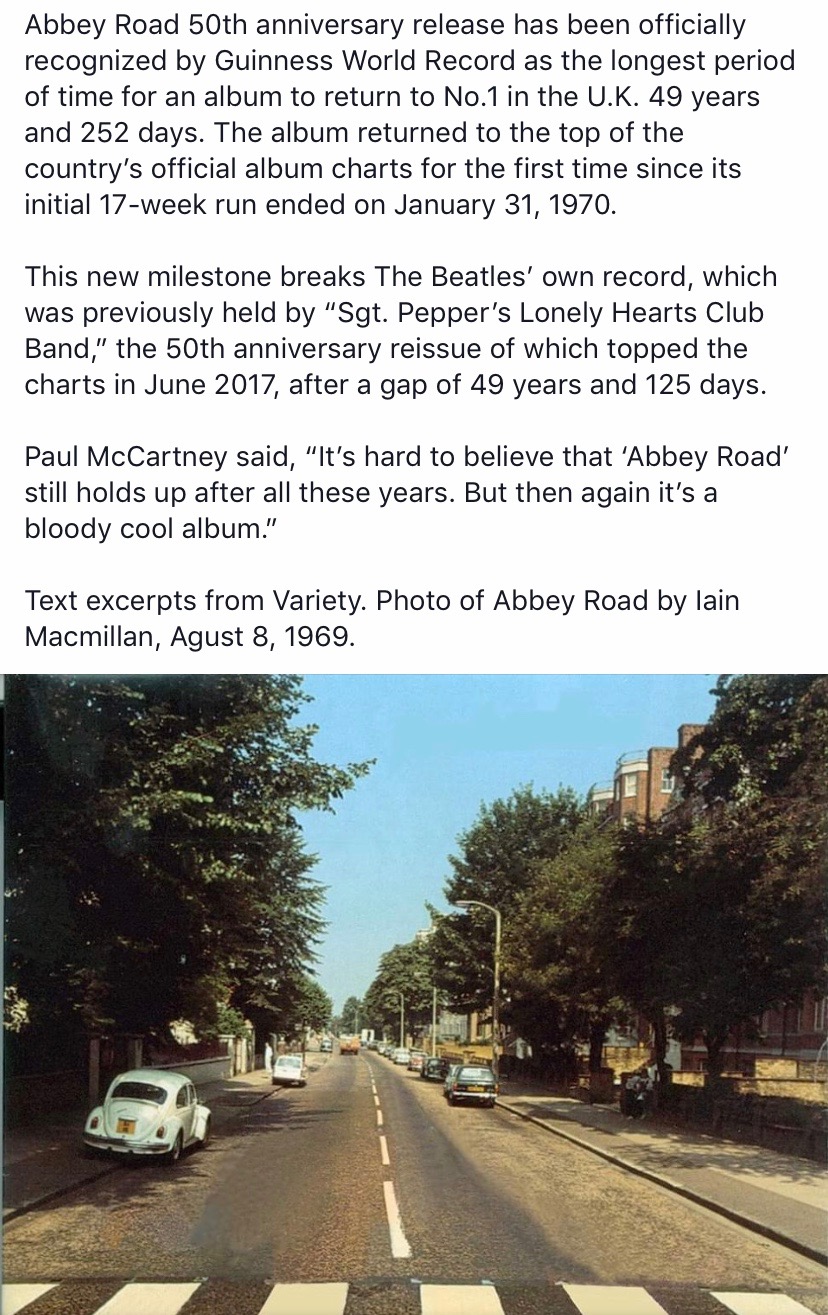 See my other Beatles stories here: 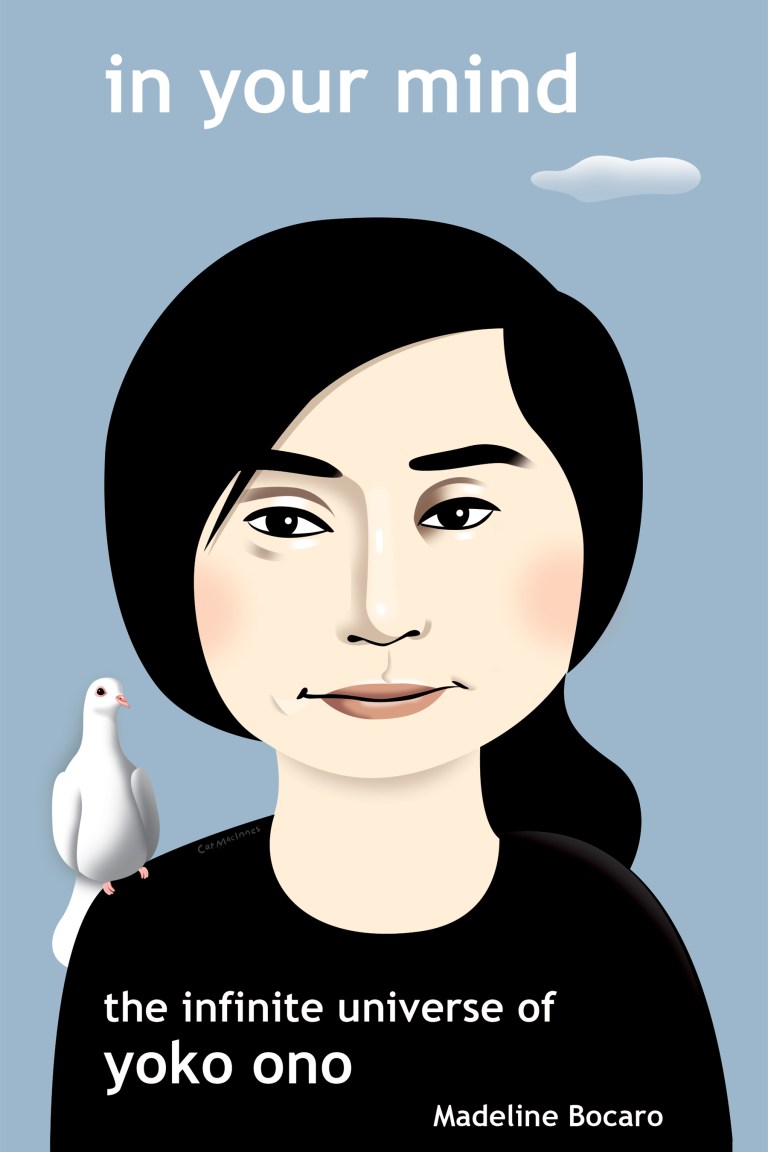