Riding the tidal wave of the huge U.K. success of The Rise and Fall of Ziggy Stardust and the Spiders from Mars album and live gigs, ‘The Jean Genie’ was released on November 24, 1972. It was the first single from David Bowie’s forthcoming album Aladdin Sane, released five months later in April 1973. The song’s title is a twist on the name of French author Jean Genet.

On October 6 and 7, 1972 Bowie recorded the song  in one take with minimal overdubs at RCA Studio D in New York City. According to co-producer Ken Scott, the song was mixed in mono and stereo in Nashville by Bowie and Mick Ronson ahead of the single release. It was later remixed for Aladdin Sane with reduced reverb.

‘The Jean Genie’ was another of David’s songs about ‘young Americans’ – the first being ‘Queen Bitch from Hunky Dory which was about (and in the style of) Lou Reed and The Velvet Underground and their portrayal of New York City’s off-beat scenesters. In fact, many of the songs on Aladdin Sane reflect Bowie’s American experiences on tour. The most blatantly harrowing are ‘Panic in Detroit’ and ‘Cracked Actor’ about Los Angeles. Bowie’s fellow British allies Mott the Hoople were equally enamored by American cities at the same time. ‘All the Way From Memphis’ on their album Mott (the  follow-up to All The Young Dudes, produced by Bowie) was released  as a single in July 1973. 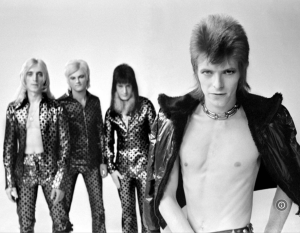 “It ultimately turned into a bit of a smorgasbord of imagined Americana. Its central character was based on an Iggy-type persona and the setting was inspired by Max’s Kansas City. The title, of course, was a clumsy pun upon Jean Genet.”

Weeks after Bowie’s September 28th show at Carnegie Hall, the song was created for fun when David was visiting and serenading Warhol’s Factory acolyte Cyrinda Foxe at her New York City apartment. He had been playing the riff on the tour bus for some time. Cyrinda was a NYC scenester (later appearing in Warhol’s 1977 film Bad) who emulated Marilyn Monroe. Cyrinda was a lover of Bowie (and of his wife Angie). She later married David Johansen of the New York Dolls and Steven Tyler of Aerosmith, giving birth to his daughter Mia. (Cyrinda’s given name was Kathleen Hetzekian. She died in 2002 at age 50 of a brain tumor). 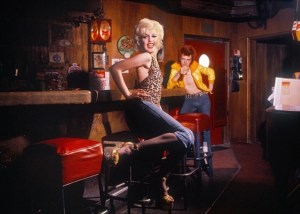 While in New York City, Bowie had famously met Iggy Pop whom he had idolized from afar. They were introduced at Max’s Kansas City at the behest of The Stooges’ manager Danny Fields. This led to their lifelong friendship and working relationship.

“‘The Jean Genie’ was an ode to Iggy, I guess, or the ‘Iggy-type’ person – white trash, trailer-park kid thing – the closet intellectual who wouldn’t want the world to know that he reads. I think it’s a really good song and I actually enjoy playing it and singing it. It’s one of the few that I can keep going back to. I guess it’s because it is essentially rooted in straight old-fashioned blues. I mean, it’s basically Muddy Waters’ ‘I’m A Man’, isn’t it?”

The stomping riff of this fast blues rocker played by Mick Ronson comprises an amalgam of R&B influences; The Yardbirds’ cover of Bo Diddley’s ‘I’m a Man’, and ‘Oh Yeah’ by The Shadows of Knight’. Added harmonica was to evoke The Rolling Stones. Ronson lets it rip on guitar, and away we go! Bassist Trevor Bolder came in on the chorus too early, prompting Bowie to say, Get back on it”.

“He pointed it out to Bowie at the time and Bowie said, ‘Leave it in, I like it.’ When we played that song live, Bowie told Trev to repeat the mistake.”

Woody Woodmansey – Spider From Mars: My Life With Bowie 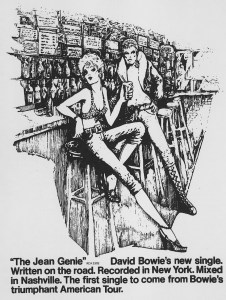 Produced by Bowie and Ken Scott, ‘The Jean Genie’ was  one of Bowie’s biggest UK hits, reaching No. 2 on the UK Singles chart. However, the song only reached No. 71 on America’s Billboard Hot 100. The US release had ‘Hang On to Yourself’ as the B-side. The B-side in Japan was ‘John, I’m Only Dancing’.

‘The Jean Genie’ was first performed live in Chicago on October 7, 1972 at the Auditorium Theatre on the day the recording was completed.

Photographer Mick Rock shot a promotional film for the song using studio and live footage of Bowie and The Spiders From Mars. Additional footage of David and Cyrinda was filmed at the Mars Hotel in San Francisco. In the film, Bowie wears a choker necklace referencing Iggy’s fashionable dog collar. 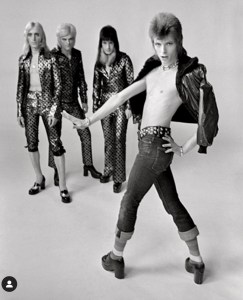 The song was performed live on BBC’s Top of the Pops on January 4, 1973. Although the T.O.T.P. tapes were notoriously wiped, a copy of this was made by BBC cameraman, John Henshall who invented the fish-eye camera lens. Henshall was not aware that he owned the only existing copy. He was persuaded to share it in 2011 when the clip was broadcast for the first time since the original showing –  in its full glory. Dancing at the side of the stage we can see Wendy Kirby and Daniella Parmar, regulars of London’s Sombrero club who had befriended David and inspired his look. 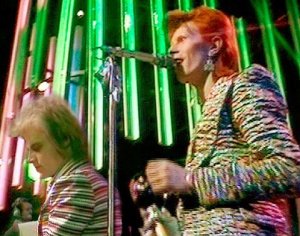 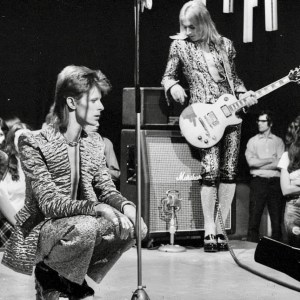 Bowie later performed ‘The Jean Genie’ on his own episode of the American television music show The Midnight Special, which he titled The 1980 Floor Show. 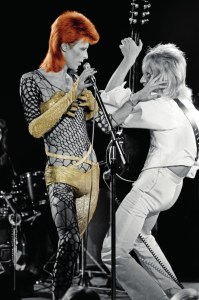 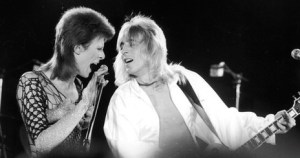 Glam band The Sweet (produced by Chinn / Chapman) included a similar sounding riff to ‘The Jean Genie’ on their single ‘Blockbuster’.

The Spiders From Mars: 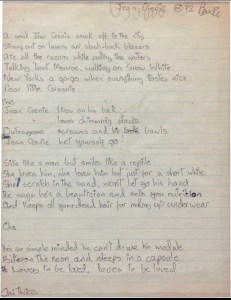 Madelinex.com is a non-profit blog created for educational and research purposes.

Images that may violate copyright or free usage laws will be removed immediately upon request. madelinex@mac.com.

2 thoughts on “THE JEAN GENIE”