The Sparks Brothers film is a gift to us all. Fans will revel in the treasure of unseen archival photos and film footage. They will love the reverence of director Edgar Wright in the chronological inclusion of every one of Sparks’ 25 albums and the rollercoaster ride (pun intended) he takes us on –  through fifty years of the band’s ups and downs. It premiered at the Sundance Film Festival last night.

There is no need to convince me that Sparks are wonderful. As a lifelong fan and as their fan club president, I completely understand Edgar Wright’s mission to turn the world on to his favorite band. After spending decades myself as a lonely Sparks fan trying to share my passion for Ron and Russell Mael’s odd genius and joyful music – only to be met by grimaces, Wright’s film has illuminated the reason for our struggle to convert the masses; Sparks are dead serious about fun. 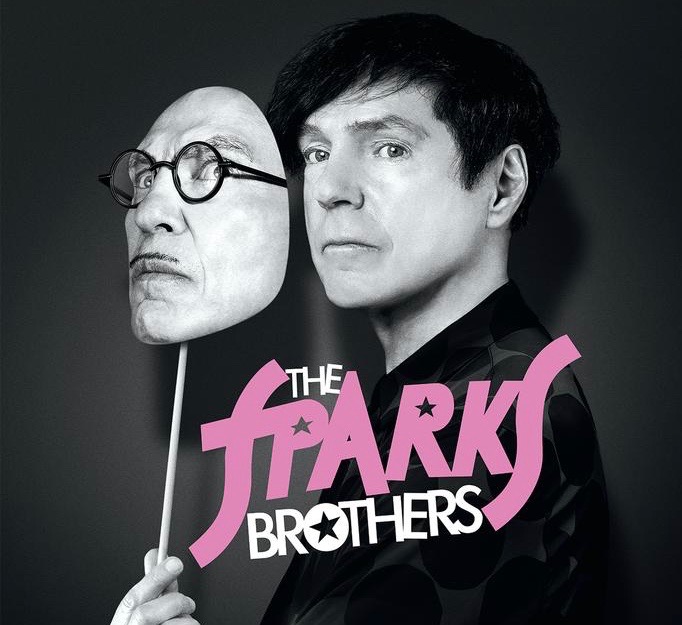 Ron and Russel Mael are brothers, bonded by their complementary dis-similarities, a shared musical brain and their utmost conviction to persuade everyone to think more reverently about what pop music can be. 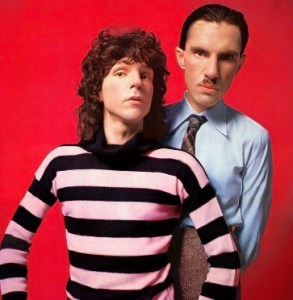 Most people enjoy a pretty love song, a hard rocker, a dance song or an opera. Sparks condense all of these elements into one song! Ron’s clever lyrics inject irony, humor and sarcasm. Intellectual fun and playful artfulness send most brains into overdrive, to short-circuit. Sparks fans are the ones who can handle it. We are all represented in Edgar’s film.

Ron’s lyrics deliver dry social commentaries from inside their “all Sparks all the time” existence. Their cinematic sound is influenced by early rock n’ roll, by classical music and  by geniuses in other realms – from Gershwin to Bergman. Sparks’ severely genre-swinging oeuvre propels the film.

Wright’s fast-paced films (Shaun of the Dead, Hot Fuzz, Baby Driver,  Scott Pilgrim vs. the World, The World’s End…) have their own fans. He soundtracks them all with his favorite music and ours. Wright brings his unique filmic attributes to The Sparks Brothers in spades. So many goodies are packed tightly into this fast-paced 2 ½  hours (I hear that a 3-hour version exists!) that it feels like mere minutes have gone by – like watching a thriller. The car chase is replaced by Ron and Russell’s relentless pursuit of fame and acceptance, always elusive to them… until now!

The actual Sparks brothers – Ron and Russell Mael – discuss their triumphs and pitfalls with grace and their usual oddball humor – laughing at themselves, their detractors and artists who copped their style and reaped rewards unavailable to Sparks, yet they maintain utmost decorum.

All interviews (many surprising artists and celebrities included) are filmed in monochrome, interjected with humorous colorful animations illustrating some of the more ridiculous episodes in the world of Sparks (similar to what Jim Jarmusch did in Gimme Danger – his documentary on another un-loved, yet later appreciated band Iggy and the Stooges). There are some  Beavis and Butthead moments.

We see an animation of Russell’s brain oozing out of his gaping head after he injures himself with a stage prop – the infamous mallet. Later, an animated version of the band is ready for their big break on Top of the Pops. They are rejected upon arrival to the TV studio by producer Robin Nash for not having the proper work visas, de-railing their potential No. 1 spot on the charts that week for their single “This Town Ain’t Big Enough For Both of Us”. Displaced by the Rubettes who appeared in their absence, Sparks finally appeared on the show the following week. Their song stalled at No. 2 in the U.K. chart, with the Rubettes still at No. 1.

My favorite illustrative film bit is Ron and Russell actually pushing an envelope between each other as the narrator describes how Sparks have always ‘pushed the envelope’! Classic.

The band’s innovative and quirky album covers are given their due attention – the garish geishas, the kidnapping, the plane crash, the wedding of Ron and Russell… A couple of them completely omit the band’s name from the cover. Their eight album is titled Introducing Sparks.

We begin with poignant family photos and films of young Ron and Russell with their supportive parents. Losing their father at a young age was a tremendous blow. He had turned them on to great music.  Their mom drove them to Las Vegas to see The Beatles. They revel in being young in the 1960s when race or genre did not matter in music, (British bands and American groups played alongside R&B groups) when it was all so new and exciting.

The band’s formation and recording of their first two albums as Halfnelson in 1969 is discussed by former band members and their producer Todd Rundgren – the only one who understood their brilliance at the time. (The filming led to the surprise reunion of Todd and Sparks – and the recording of a new song together – out soon!). The early struggle to propagate the Mael brothers’ magnificent weirdness in their hometown of Pacific Palisades, California leads to huge (yet brief) success when transplanted to England with the support of Island Records and  Muff Winwood.

Edgar Wright appears in his own film labeling himself “Fanboy”. 

We also hear from fans and celebrities Mike Myers, Jason Schwartzman, Patton Oswalt and U.K. talk show host Jonathan Ross. This proves that there is always a Sparks fan in close proximity.

Pioneering German electronic producer Giorgio Moroder (Donna Summer) speaks of working with the Mael brothers who invented the ‘synth-pop duo’ as we now know it. Together they made the revolutionary album No. 1 In Heaven. 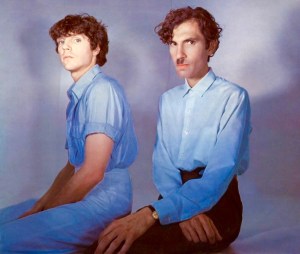 There is also incredible live footage including the Mael-mania of the Fairfield Halls U.K. gig in 1975 when (because of their record company skimping on security) fans rushed the stage and tackled Russell to the ground. There’s even an interview with the girl who embraced Ron on-stage and the roadie who pulled her off him. 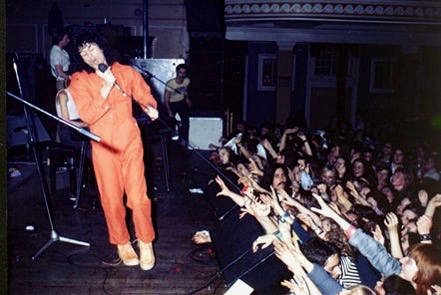 The film explores Sparks’ popularity in America in the early 1980s, especially on the West coast due to airplay on KROQ radio in Los Angeles – a festive time. This time is celebrated in the film – along with their TV appearances on Dick Clark’s American Bandstand.

Also mentioned is Paul McCartney’s flattery by imitation of Ron Mael in his “Coming Up” music video. 

The Maels had long quiet periods while working on aborted film projects – one with French director Jacques Tati and an animated feature with Tim Burton which robbed us (and them) of six years’ worth of new music. Ron and Russell were devastated and robbed of their cinematic dream. They triumphantly re-emerged in 1994 with Gratuitous Sax and Senseless Violins which spawned a huge European hit, “When Do I Get to Sing My Way?” gaining them lots of new young fans.

A massive brain explosion led to the complex quirky brilliance of Lil’ Beethoven in 2002 and the similarly bombastic Hello Young Lovers in 2004 with their opus ‘Dick Around’ which are featured in the film, in all their glory.

Sparks’ unmatched feat of performing their entire catalogue of almost 300 songs, 21 albums in 21 nights in the U.K. leading up to the debut performance of their new album (Exotic Creatures of the Deep) in 2009 is included, in detail. Here, we gain insight into the chaos and exhaustion that went into this treasured period for Sparks fans, highlighting the dedication behind each decision the band makes behind the scenes.

Drummer Steve Nistor describes the long and short-term memory problems after four months of rehearsals claiming, “I wouldn’t advise it.” We see glimpses in milliseconds of each show, leading to the burning of each album-cover on-screen by Ron with a lighted match – symbolically burying their past. Sparks are always moving onwards and upwards. Taking yet another direction, they composed a radio opera in 2009. The Seduction of Ingmar Bergman displaced the Swedish director to Hollywood, and chaos ensued.

Their collaboration with Franz Ferdinand in 2015 – a band called FFS led the Maels back to the pop genre. FF singer Alex Kapranos – once a young Sparks fan speaks about their co-written album and ensuing tour, during which the rolling stone of Sparks gathers some new moss in the form of even younger fans.

Wright filmed Sparks’ triumphant Hippopotamus gigs in 2017 in Mexico and in London, which look amazing. Hopefully we will see these on the bonus disc with the film! The pandemic has prevented them touring with their latest album, A Steady Drip, Drip, Drip – a title which sums up their slow and steady method of working.

I can’t wait to watch this again in slow motion and freeze-frame to see all the magnificent details that flash by in milliseconds.

The Sparks mystique is that there is no mystique. There is self-admittedly nothing ‘behind the curtain’. The Sparks brothers are Sparks  – all the time, committed to their art, undeterred and unrelenting.

Thanks Edgar, for this wonderful journey into the world of Sparks, where many of us have lived happily for so long. And thanks to Ron and Russell for all the glorious songs –  and for never giving in, or giving up! You will always be my big brothers. 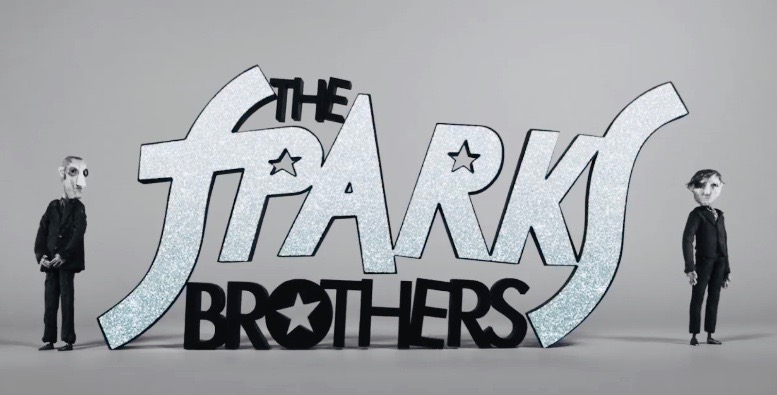 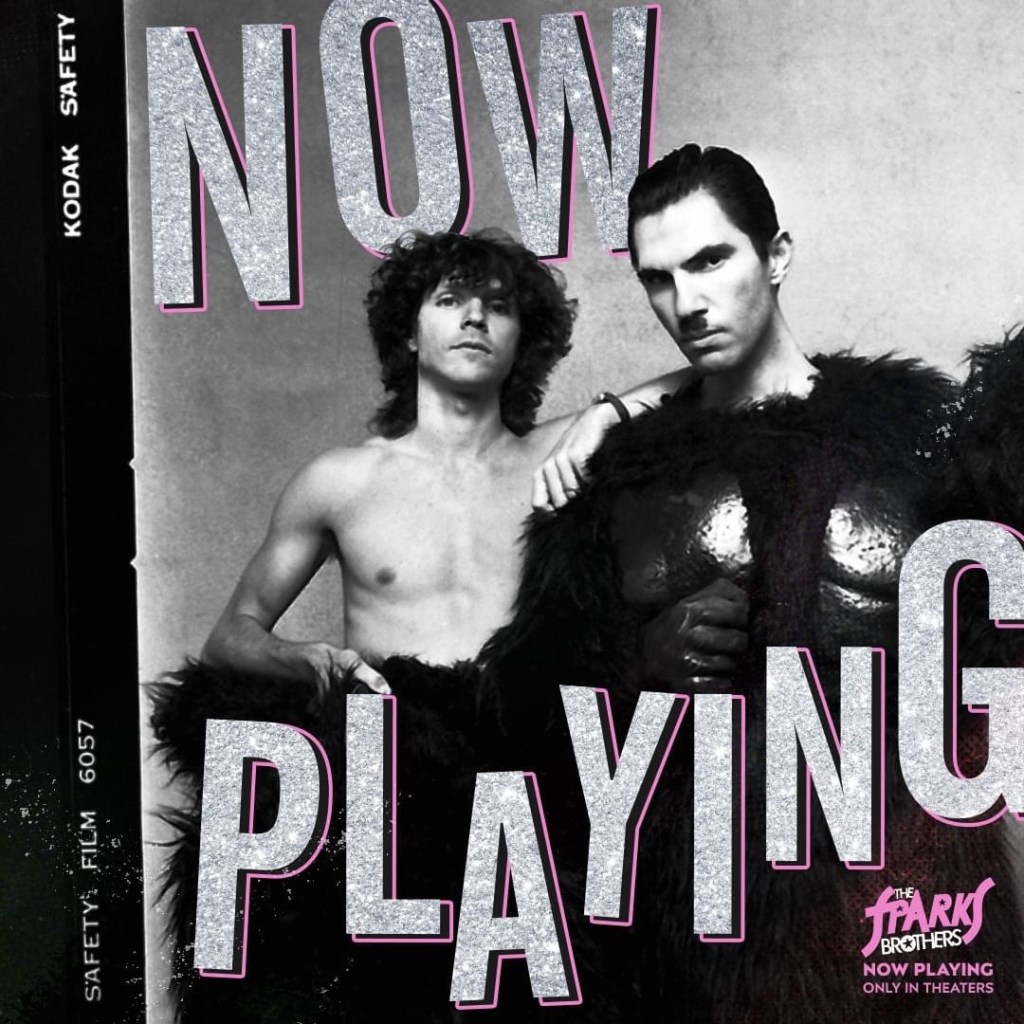 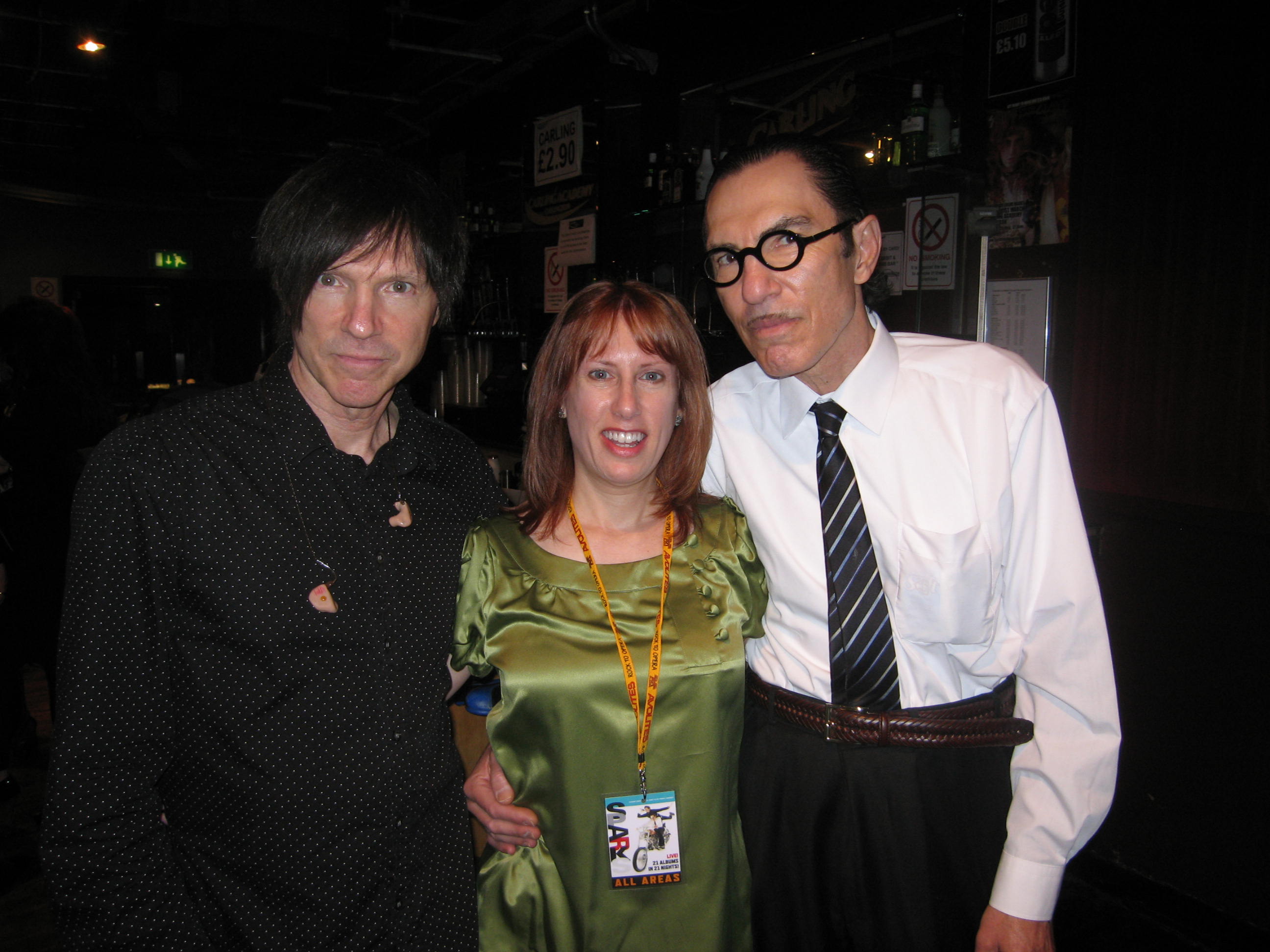 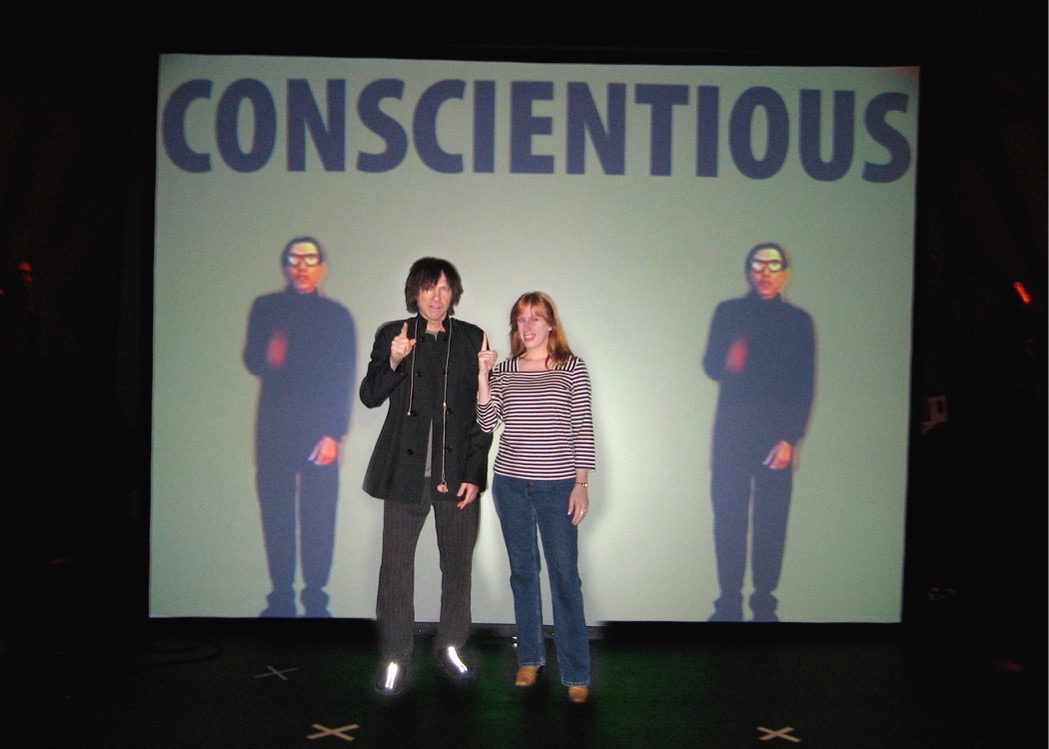 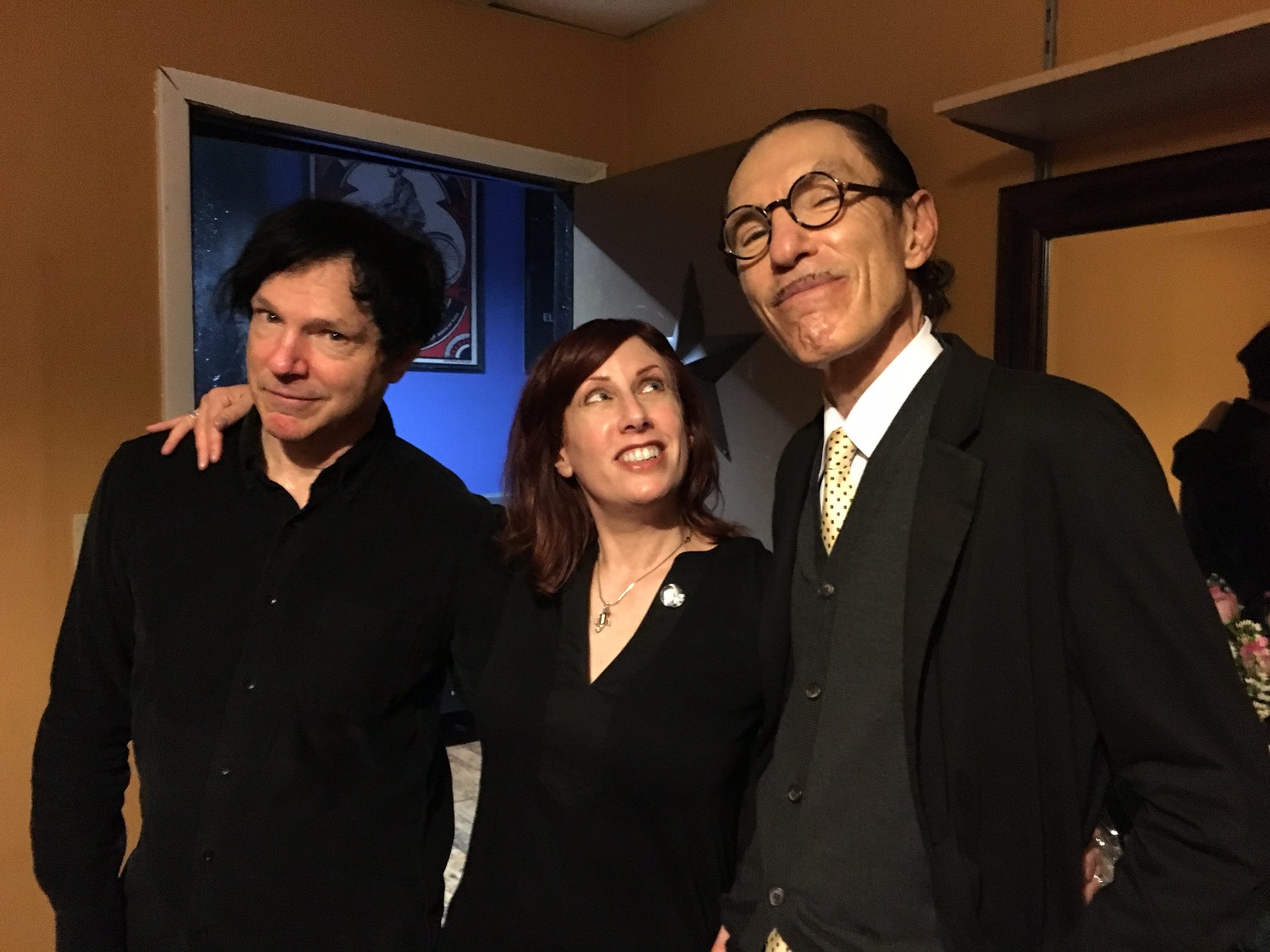 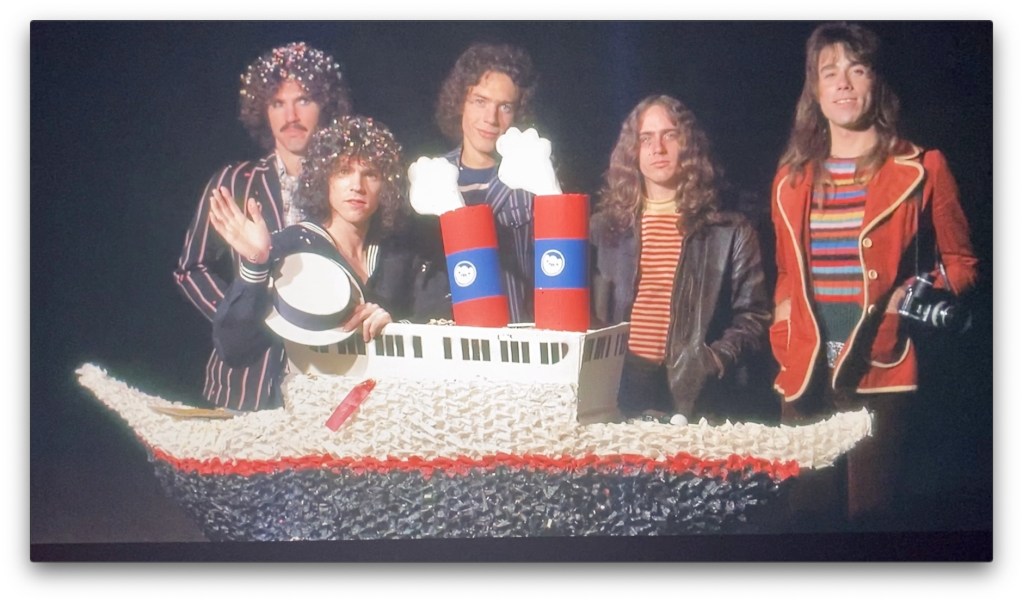