I included my story ABOUT the wonderful Sparks Fan Club in the actual Sparks newsletter (Vol. 22 No. 3), which I have been writing since 2001…

It’s about time that the Sparks Fan Club newsletter contained an article about itself. It is truly a monumental publication, and possibly the longest running fanzine in history!

Once upon a time, in adolescence long, long ago, you asked your mom to write a check for membership to the Sparks International Official Fan Club. Her grimacing look rivaled that of the Grinch as she reluctantly signed the check and scornfully handed it over. She then demanded the cash and you proudly gave up your two-weeks’ allowance. You watched the mailbox with great anticipation for the latest news on your favorite band of all time. At long last, the mustard yellow envelope would appear in the post, and you could see it from the road. You couldn’t run fast enough – tripping up the steps to the mailbox, not minding the scrapes and bruises. Fanatically tearing the envelope open for the first time in six months (or maybe longer!) you learn that Sparks had just played live in your hometown…and you missed the show!  Ah, didn’t we love that fabulous 1970s snail mail? 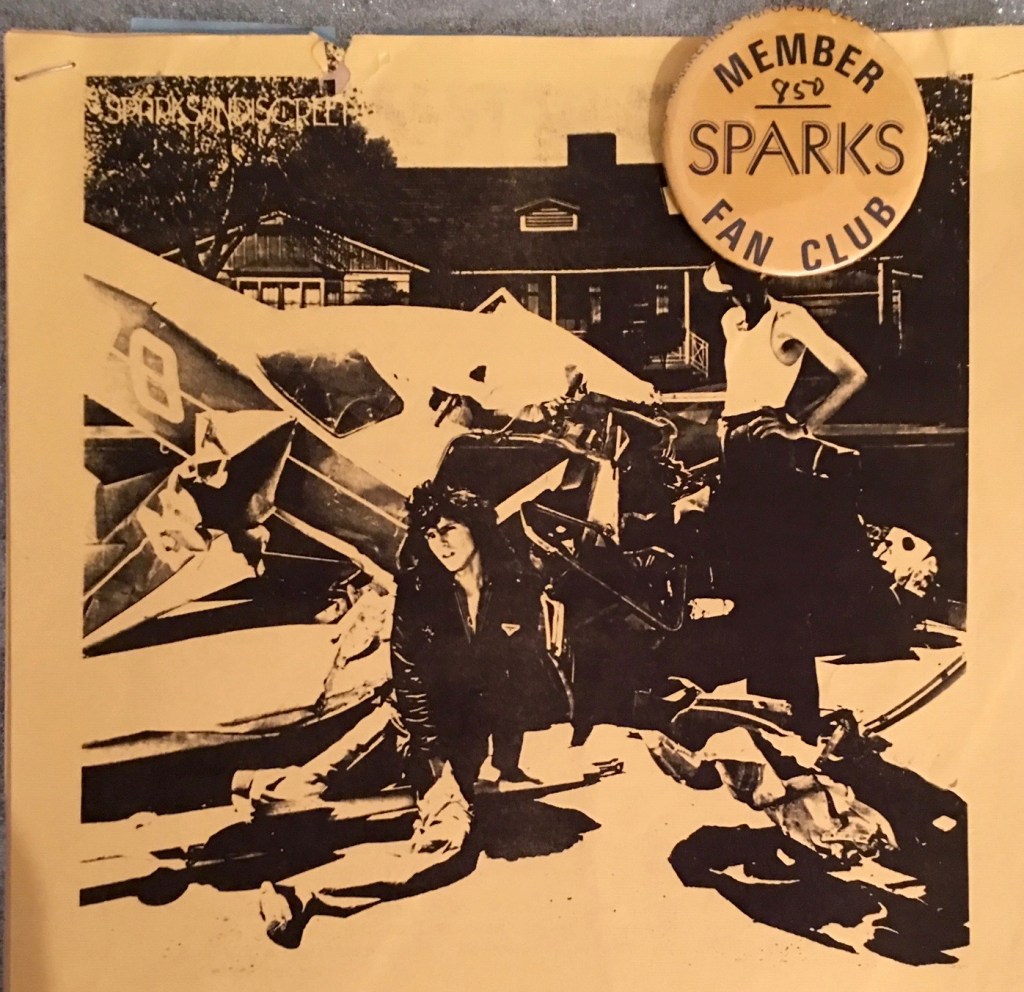 Some folks never fully appreciated the homegrown mom-and-pop charm of the old Newsletter, but you can’t argue that it was quite endearing with its retro qualities; Xeroxed photos, endless merchandise lists and the randomness of its arrival. You also got a numbered membership badge and an autographed photo! Your mom kept sending in those subscription renewal checks each year because she loved you so much – and hoped you would grow out of this phase. You never did, and now you’re old enough to subscribe for yourself AND for your kids, whom you’ve force-fed Sparks all their young lives! The Newsletter’s longevity is a testament to Ron and Russell’s loyalty and dedication to their fans, and Sparks’ vast catalogue is a chronicle like no other.

The mysterious, dedicated Mary Martin maintained the Newsletter from London in the 70s and from LA in the 80s and 90s. Our dear Mary tried to cram in as much news as possible, using every inch of space with miniscule print size, upside down and sideways. She would sometimes postpone the mailing to include more last-minute news as it happened, and was always apologetic for the lack of space needed to print all the details of the multi-media whirlwind that Sparks were always in the middle of.  ‘From the desk of Mary Martin’ we were always reminded of Ron and Russell’s birthdays (August 12 and October 5) and her own (July 6). She wished us happy holidays throughout the year and good luck with our final exams. She printed articles about Sparks albums and concerts, news of collaborations and projects, multi-lingual clippings sent in by worldwide members – thanking each one of us by name. And… thank you, but regretfully Ron and Russell could not attend the numerous weddings, graduations and birthday parties to which they were invited. She always signed off, ‘Faithfully, Sparks’. And faithful she truly was! 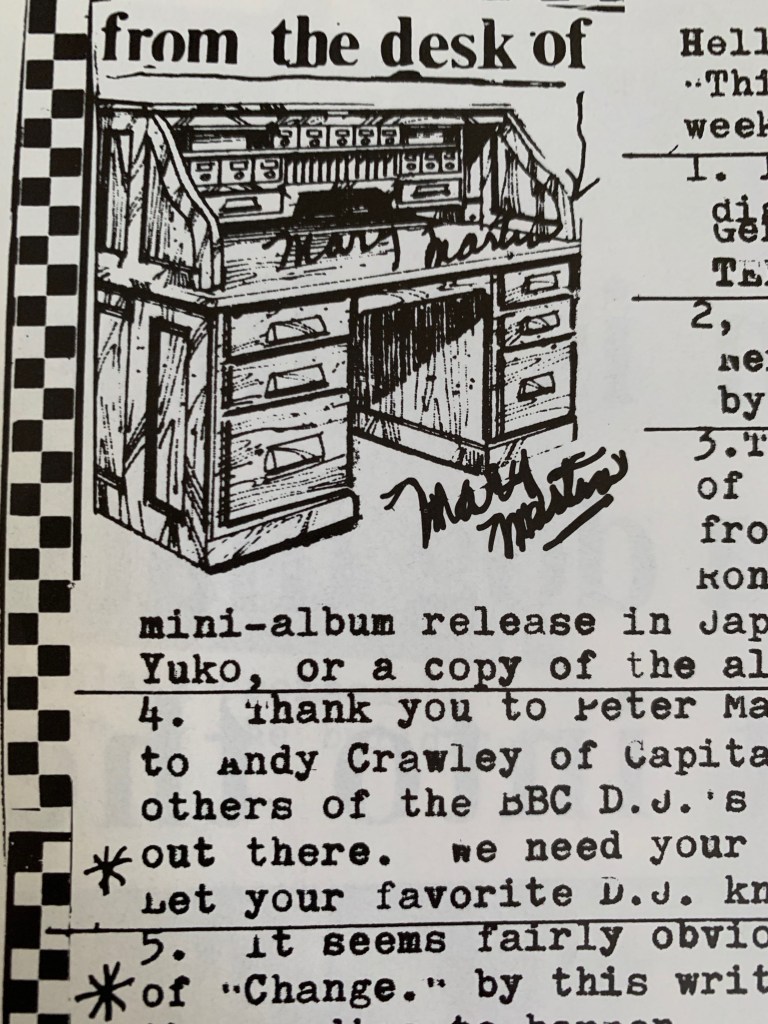 Many of us were lucky enough to win one of many contest prizes; Sparks scarves, handwritten lyrics, photos, pens, stationery, clocks and watches, Ron’s 3-piece suit worn in the movie Rollercoaster, Sparks tattoos, etc…Mary was barraged with questions about Ron and Russell’s favorite foods, colors, preferences in women and pajamas. If ever there was a slow news day, we would be treated to favorite Mael recipes or entertaining features such as ‘Russell Interviews Himself’ or ‘The Pros and Cons of a ‘Tache’, and the popular yearly ‘Sparks’ List of Approved Things. There were hundreds of exclusive candid photos with clever captions; Ron hijacking the microphone from Dick Clark on American Bandstand, the Maels trips all around the world…

The newsletter began as SPARKS LTD. and later, Sparks Flashes in 1972 when the band’s name was changed from Halfnelson and they were playing abroad. Their second album’s song titles were announced, but the album had already been released in France. The late Joseph Fleury, Sparks’ dear friend and manager penned the first issues. Joseph also illustrated the covers for Vol. 1. During issue No. 5 the fan club moved to England along with the Maels in 1974 to record Kimono My House. There were two 5” x 7” color Fan Club booklets produced with pull out centers. It soon became SparkSound in the midst of Vol. 5.

We all immensely enjoyed the exclusive detailed track-by-track song descriptions anticipating each new album’s release. With these precious clues, we would try to imagine what each new masterpiece might actually sound like – and were still utterly surprised upon first listen. Exclusive previews of each spectacular new album cover were always an added treat.

We marveled at the Maels brothers hob-nobbing with celebrities of all media (or vice versa) and news of their collaborations and protégées. We pondered the inconclusive saga of Mai The Psychic Girl and read about their film and soundtrack work.

Vol. 2 No. 5 in 1975, the first issue of Flashes from Hollywood announced the new Indiscreet album and second U.S. tour.  In 1976, during Sparks’ third US tour with Big Beat (Vol. 3 No. 2) the UK and USA Fan Clubs merged to become Sparks International Official Fan Club. The international club then had 5,000 members on all continents and from 49 US states, but still none from Idaho! The oldest member, an 80-year old woman presented Ron & Russell with a giant 50-pound cheese backstage after their Paris Olympia concert! We also saw baby photos of our youngest member, 2 months old. One member, Jim Wilson actually grew up to play guitar in the band! And another (myself), became the writer and editor of the Newsletter. 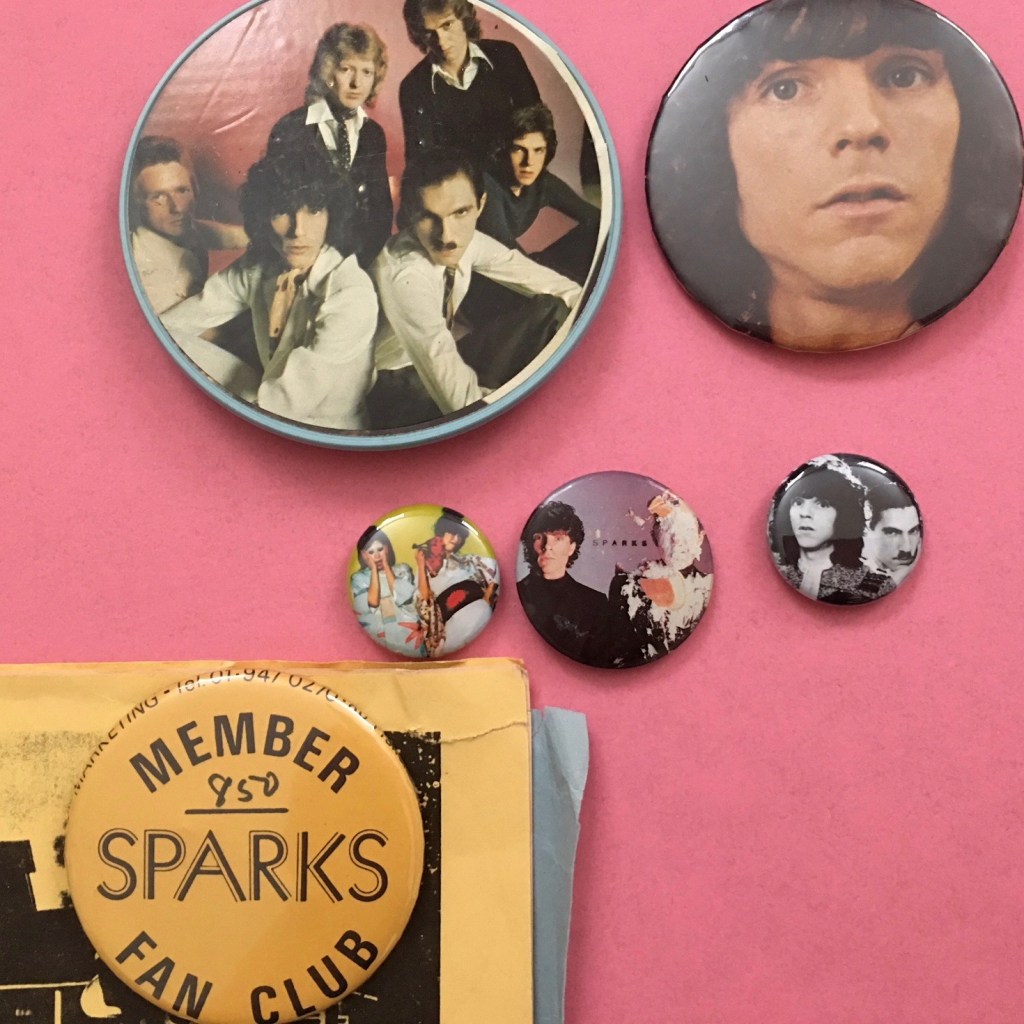 In 1978, Vol. 4 No. 1 had a wonderful photo of the huge Introducing Sparks billboard ad (for their 8th album) towering over Sunset Blvd. in LA on its back cover, and welcomed its first member from Iceland (perhaps it was Bjork). Ron is bitter about the first ever Best Of Sparks album release…

“Well, we’ve got a ‘Best Of’ album released. Just like Dean Martin. I was a bit surprised when I first heard the news, but I suppose that these sorts of things are inevitable, like death and taxes and critics…This whole thing is a little like being congratulated on being the father of a cute kid when you know that you’ve been either careful, or anti-social for the past year. I’ve been both, incidentally. 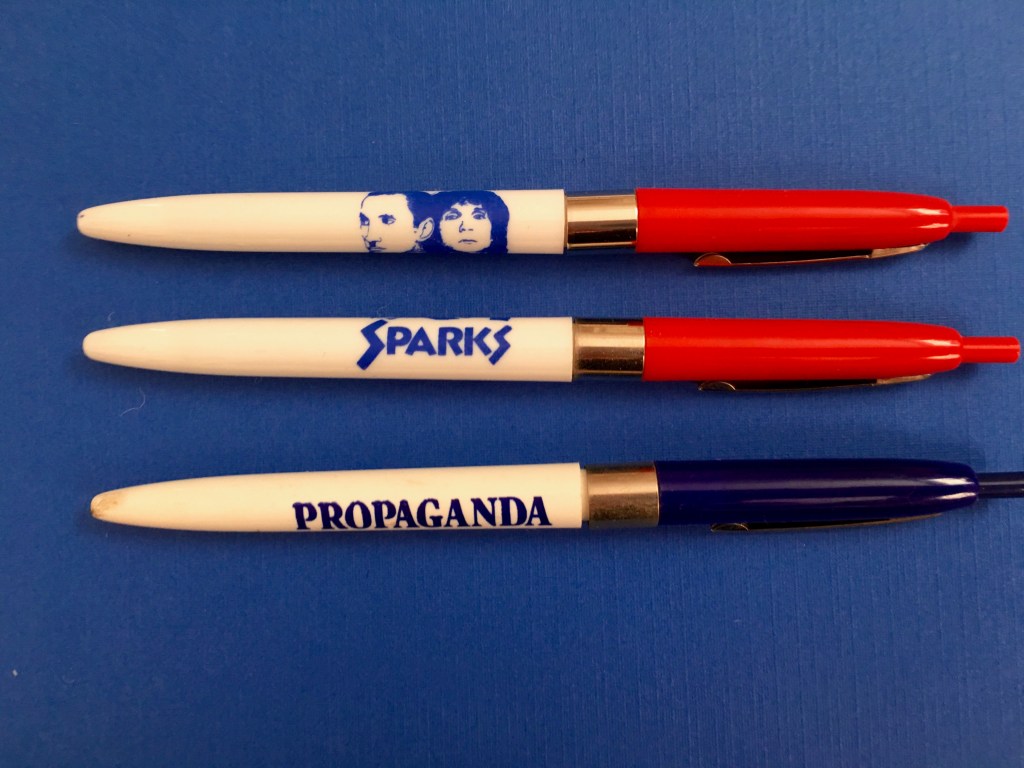 In Vol. 4 No. 6, Joseph Fleury was back, giving us a preview of No. 1 In Heaven. In the middle of Vol. 5, the newly named SparkSound became an ambitious bi-monthly with the release of Terminal Jive, welcoming its first member from South Africa. Vol. 7 announces Whomp That Sucker and another tour. There was a flurry of Sparks activity in hometown Los Angeles due to KROQ Radio’s support of the album. Vol. 8 previews Angst in my Pants.

Vol. 9 No. 5 reports that Alaska Airlines is playing ‘Cool Places’, and reprints a Sparks feature from Andy Warhol’s Interview magazine. During the Pulling Rabbits out of a Hat era (Vol. 10 No. 5 from October 1984) Mary reprinted a letter to Ron from American Bandstand’s Dick Clark himself, after Ron had hijacked the show. “Dear Mr. Mael, Thank you so much. I enjoyed being on your show. Sincerely, Dick Clark”

“In the beginning, there was the 7-inch. But lo, the people said, pry thee, why so short and so light on the bass drum? The Lord responded, “I shall satisfy your earthly desires. I shall extend the hymn by several minutes and unleash the full power of the rhythm section. Now get off my back. The people cheered and knew that not only was their Lord a good Lord, but that he also could get recording studio time at a very low rate.  When the new 12-inch creations arrived, the people sensed the dawning of a new era in all things carnal. They rejoiced and rejoiced and rejoiced a little more, to the new sounds. Then went to an after-hours club. Unfortunately, on Sunday the people were too tired to properly thank the Lord for what he had given them, but instead remained in bed and read the Sunday papers.”

The first issue of 1986, Vol. 12 No. 1 previews Music That You Can Dance To. In 1988, Vol. 13 begins with Sparks creating their own new studio where they will record Interior Design and their collaboration with Les Rita Mitsuoko. In Vol. 14 No. 2 Ron and Russell are back in the USA composing for Mai the Psychic Girl. 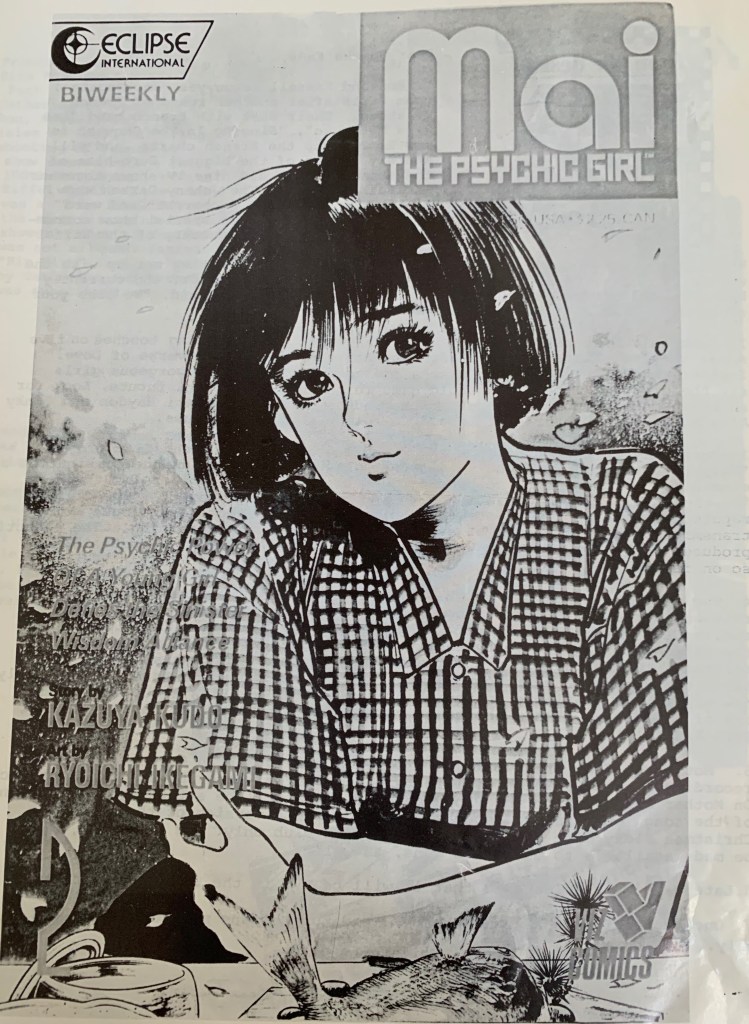 In 1991 Vol. 14 No. 6 contains a full-page memorial to dear friend Joseph Fleury who had devotedly supported Sparks since 1974 and had written some of the newsletters. Vol. 15 deals with the ‘National Crime Awareness Week’ single and its international promotion. Also the first Sparks collections and soon after, the Island Records albums are issued on CD!

Volume 16 brings the exciting announcement in the summer of 1994 that Sparks would play live in the UK in November for the first time in over ten years (with their new album Gratuitous Sax & Senseless Violins). Their ‘comeback’ show at Shepherd’s Bush Empire was voted one of the top 100 best gigs ever by Q  magazine in the U.K. In 1995 and 1996 we read about the Maelmania on hugely successful European tours.

Vol. 17 No. 4 announces a Sparks ‘re-workings’ album that was to become Plagiarism. There’s a Q&A visit to the studio for the recording with producer Tony Visconti and an orchestra. In 1998, Vol. 18 No. 4 has a full report on the monumental Kimono My House / Lil’ Beethoven performance at Morrissey’s Meltdown festival in June 2004. 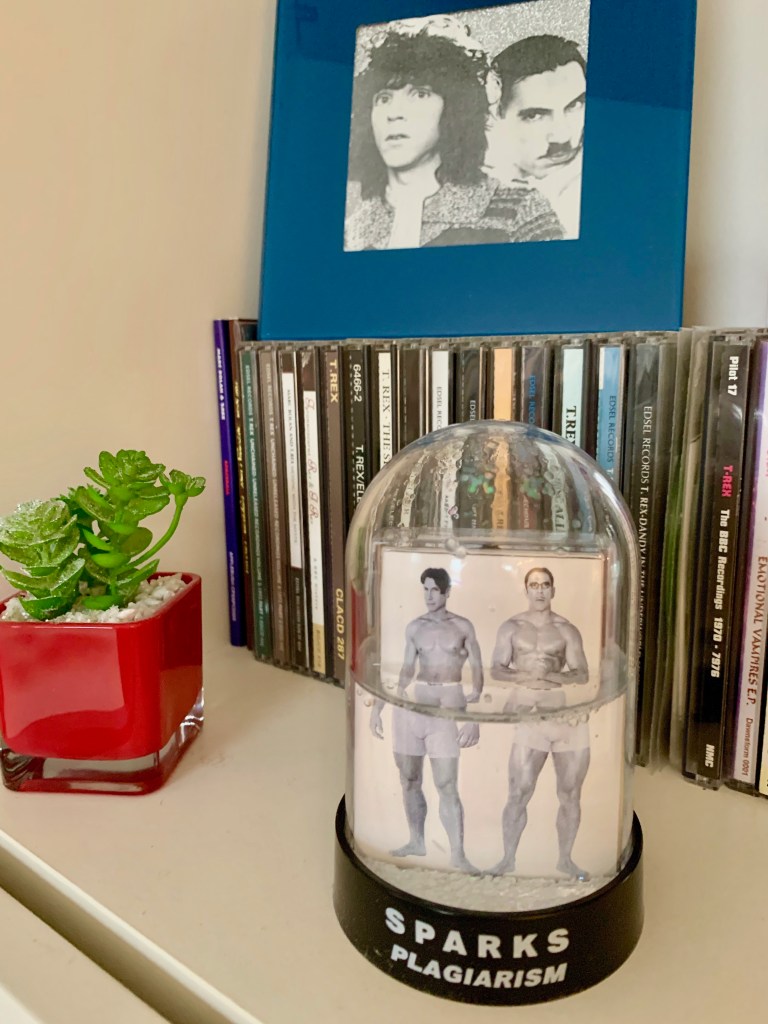 In 2001 Vol. 19 announces the Balls tour of Germany, Australia and Sparks’ first ever gigs in Japan. Vol. 20 introduces Lil’ Beethoven in 2002 and also highlights Sparks’ triumphant return to New York City’s Central Park in August 2003. The newsletter is now in color, and includes retrospectives on past albums.

Vol. 21 No. 2 brings the lowdown on Hello Young Lovers and the upcoming tour. 2008 covers Exotic Creatures of the Deep and the 21 x 21 Sparks Spectacular concerts in Islington. Vol. 22 begins with The Seduction of Ingmar Bergman album and concerts. And here we are again with Sparks’ first live album, Two Hands, One Mouth and yet another couple of tours! 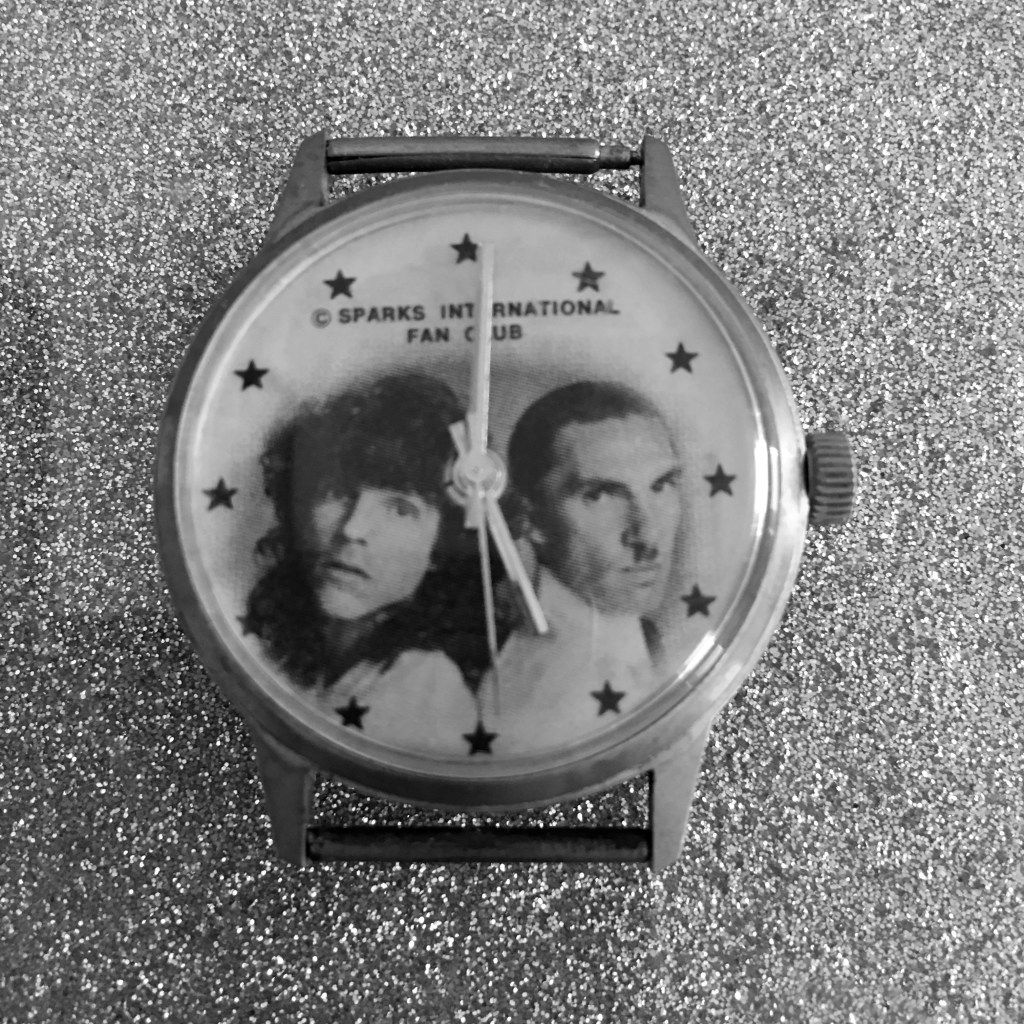 What other band has made twenty-one extremely diverse and unique albums, toured countless live shows, influenced legends and performed every song they’ve ever written live in succession? Sparks did just that – over 21 nights in Islington in May 2008 – without missing a beat! Some of us had Golden Tickets, some watched the live webcasts with our children and grandchildren. But we were all present in some form, reeling at the profundity of such a historic event and proud that our favorite band has not only withstood time, but is still transcending anyone’s expectations.

Eventually, however much later in life, most of us ultimately did get to travel far and wide to see Sparks live. And we finally got to meet other fans who also thought they were alone for all these years.

Relationships and web sites come and go, but our beloved Newsletter is still going strong with over 100 issues and our biggest issues yet.

We will ‘Faithfully’ continue bringing you the latest and greatest on Sparks. Thanks Mary, for your decades of devotion and for the wonderful job of keeping us informed and enlightened. We are your biggest fans. We miss you. Keep the faith!

Notes from Mary Martin answering my request for a 99-year long membership, and also telling me I was doing a great job with the newsletter after she ‘retired’… 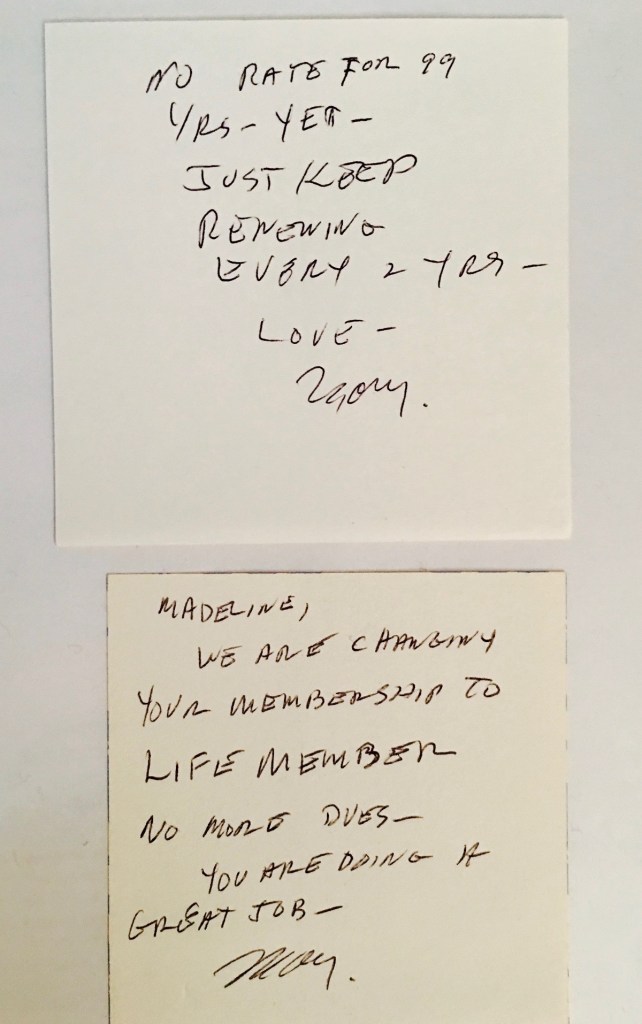 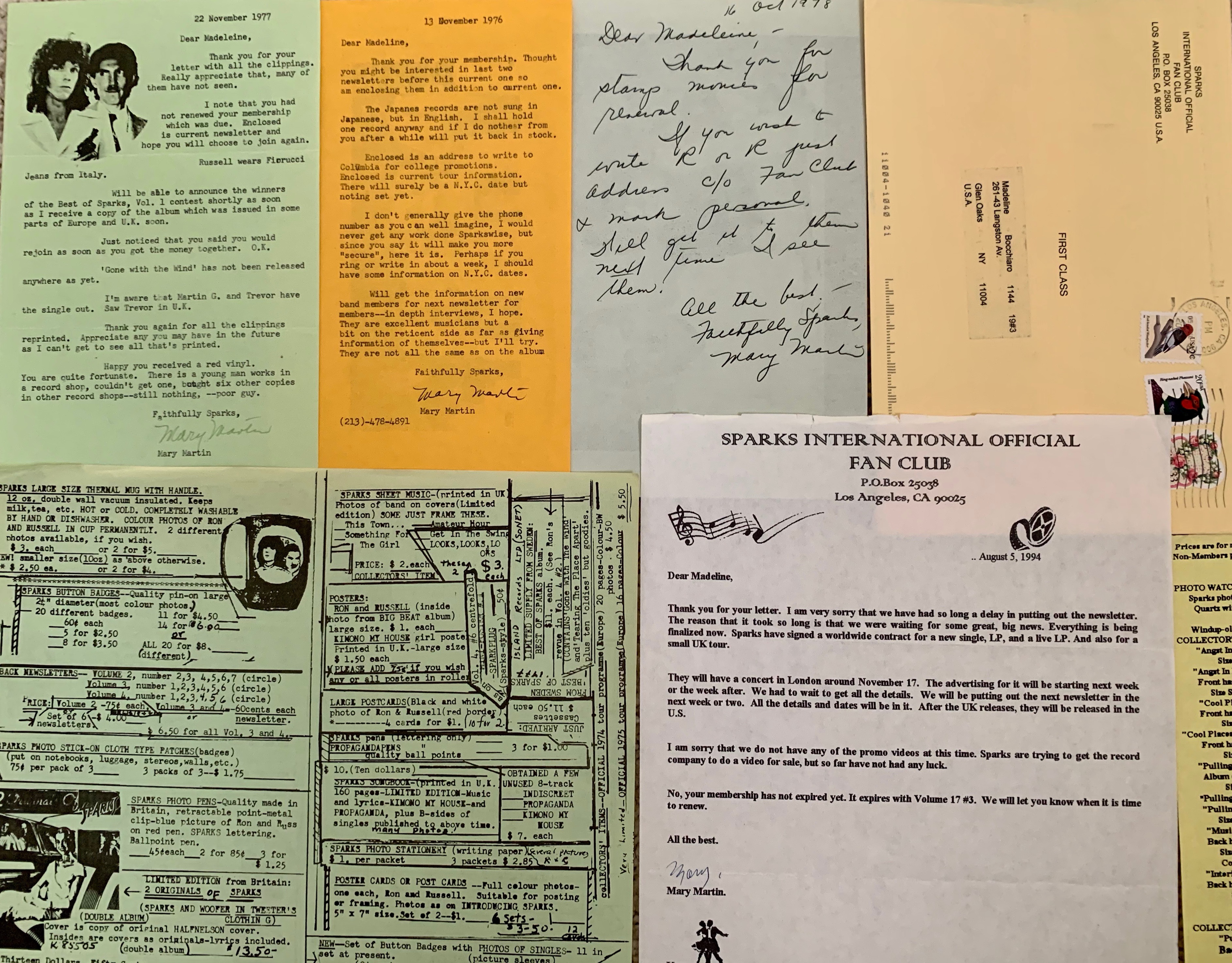 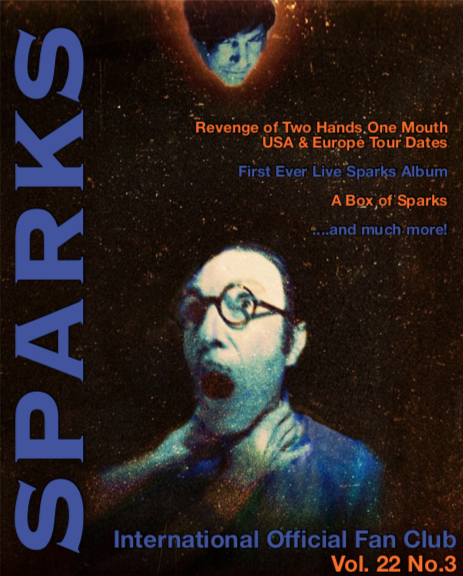 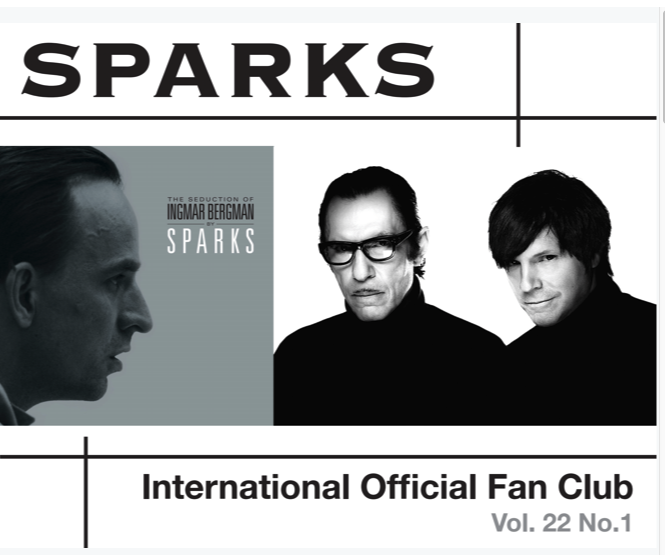 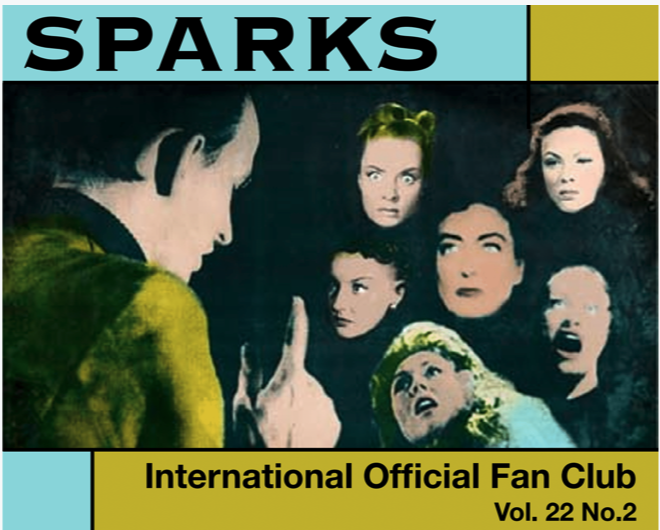 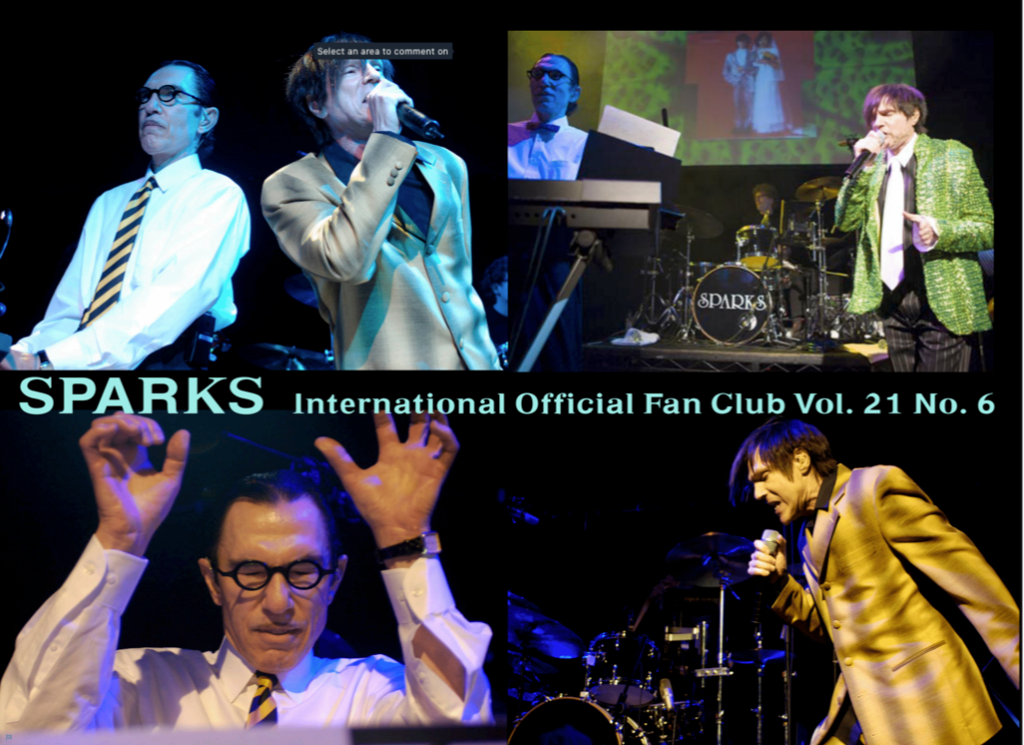 Cover of the latest issue: 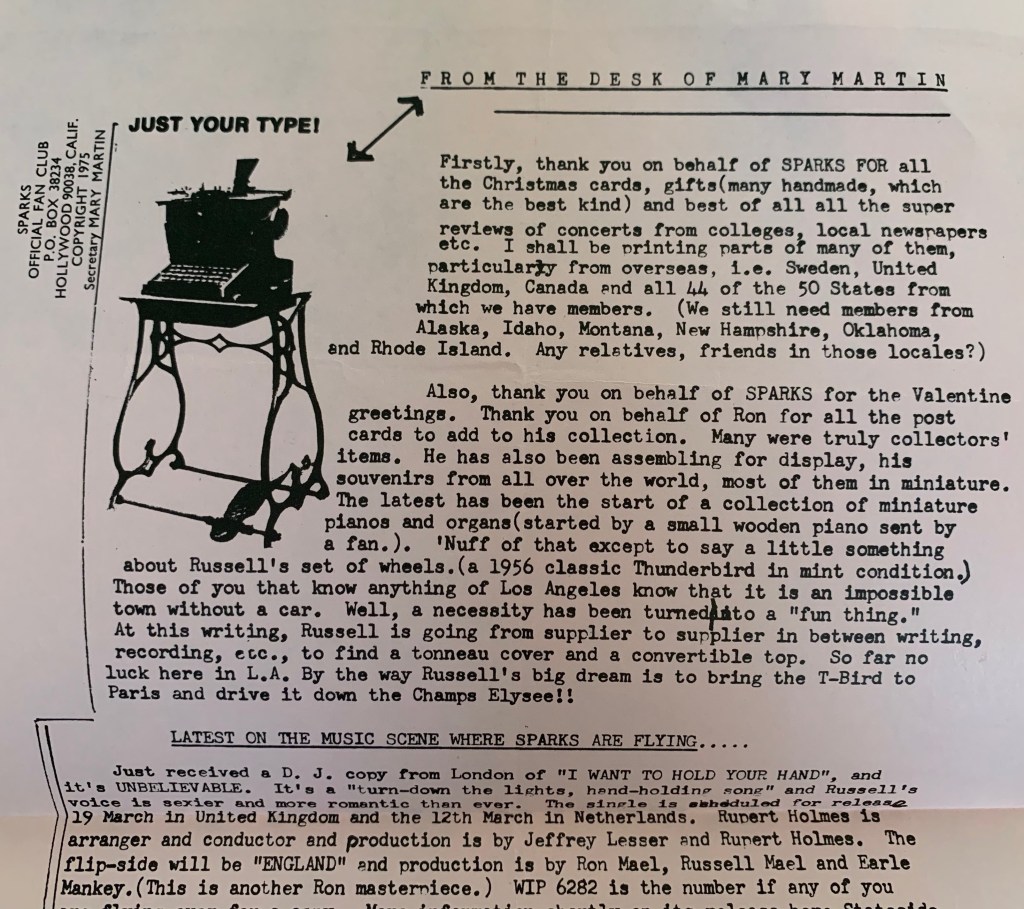 This is a non-profit blog created for educational and research purposes.