© Madeline Bocaro, 2021. No part of this site may be reproduced or re-blogged in whole or in part, in any manner without permission of the copyright owner.

John F. Kennedy was assassinated  while riding in an open-top car

on a bright sunny day in Dallas, with his glamorous wife Jackie at his side. 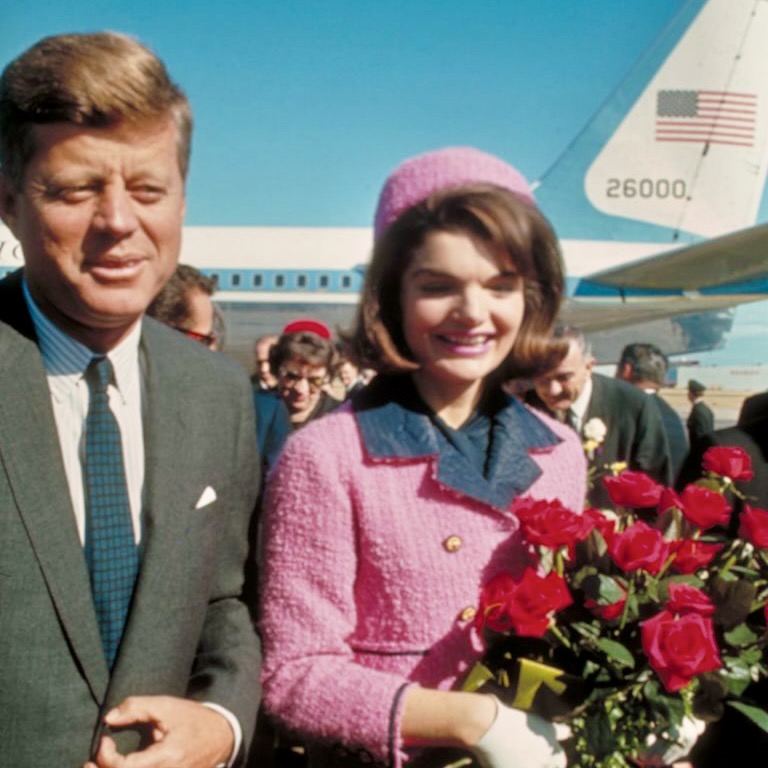 Jacqueline Kennedy’s pink wool suit with navy blue lapels, stained by the blood of her husband is preserved in the National Archives in Maryland. This was Jackie’s stipulation.  It is kept in the archives (along with her shoes, stockings and handbag) and her husband’s killer’s rifle, bullets and the windshield of the midnight blue Lincoln 1961 limousine.

It will not be seen again until more than one hundred years after the awful event.

The clothing now belongs to their daughter, Caroline Kennedy who donated it to the archives, stipulating that no living heir should have to view them in their lifetime.

Jackie’s suit is a re-creation of one created by Coco Chanel for her 1961 autumn/winter collection. It was a high-end reproduction by the high-end New York fashion salon Chez Ninon, made in 1961. The fabric is a woven tweed fabric (bouclé). The jacket had gold buttons and four pockets.

The matching pillbox hat became a worldwide fashion sensation because of Jackie. She had also worn a black one on a trip to Germany in 1963.

Jackie chased after her hat after a gust of wind blew it away. Her hand-grab caused a dent in the hat. Women all over America began deliberately denting their own hats and eventually hat-makers began creating new ones with dents included. Jackie’s pillbox hat and gloves were lost in the mayhem.

When Jackie became First Lady, her father-in-law, Joseph Kennedy, allegedly discouraged her from buying clothing from Parisian fashion houses. He preferred that she appeared patriotic, by wearing only American-made clothing. Because of this restriction, Jackie became a loyal client of Chez Ninon in New York.

While Chanel did not construct the pink suit, the design house provided the fabric, buttons, and trim. Chez Ninon merely assembled the suit in a process called “line for line.” Having Chez Ninon create the suit — using Chanel fabric and materials — allowed Jackie to bypass the restriction of buying and wearing French-designed clothing. The jacket by Chez Ninon (in 1963) was estimated to cost between $800 to $1,000. 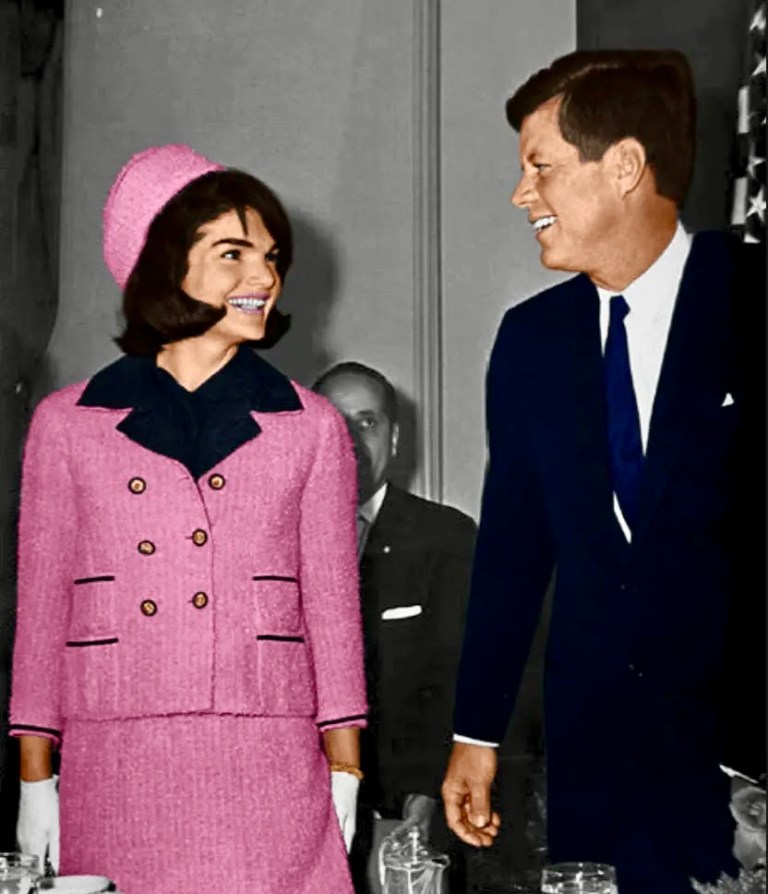 “There are going to be all these rich, republican women at that lunch… wearing mink coats and diamond bracelets. And you’ve got to look as marvelous as any of them. Be simple — show these Texans what good taste really is.”

Following the assassination, Jackie refused to take off the blood-stained suit, which was soaked in red while she cradled her husband’s body. She told Lady Bird Johnson,

“Oh, no… I want them to see what they have done to Jack.”

She wore the suit alongside Lyndon B. Johnson as he was sworn in as the 36th president on the plane in Dallas. Jackie refused to take off the suit until she arrived back at the White House the following morning.

When Jackie did take it off, a maid packed her clothing in box and gave it to Jackie’s mother. Six months later, her mother gave the box to the National Archives with a note saying: “Jackie’s suit and bag worn Nov. 22, 1963.”

Jackie’s outfit has never been cleaned. It is kept out of public view in a temperature- and humidity-controlled room. The precise location is secret. The archive has the suit stored in a windowless vault in an acid free container, where the air is changed three times an hour to properly maintain the integrity of the cloth.

Also hidden from view in the new archives building in Maryland: the blue blouse Jackie Kennedy wore beneath the pink suit, her stockings, blue shoes and blue purse.

Jackie’s signature pillbox hat was not included in the box. It has been missing since shortly after she returned to Washington, D.C. Jackie was last seen wearing the hat in the emergency room of Parkland Memorial Hospital in Dallas. The hat was apparently given to the Secret Service initially, who turned it over to Mrs. Kennedy’s private secretary. Then it disappeared.  It has not been seen since.

At the time, the public majority did not know Jackie’s suit was pink: In 1963, newspapers didn’t print color photos and television news was not broadcast in color It was not until till 11 months later that LIFE magazine published a special report on the findings of the Warren Commission. They included eight color frame enlargements from Abraham Zapruder’s film of the assassination.  LIFE magazine was given exclusive rights to the Zapruder film and along with it, the magazine ran full-page color photos of the Kennedys arriving at Love Field.

Caroline Kennedy (Jackie’s sole surviving heir) donated her mother’s clothing from that dreadful day to the National Archives in 2003. A condition prevents them from being displayed until at after 2103, when the Kennedy descendants can elect to reveal them, or not.

“Somehow, that was one of the most poignant sights,

that immaculate woman exquisitely dressed, and caked in blood.”

The blood of their husbands.

This is what Yoko Ono and Jacqueline Kennedy have in common…

“I knew Jackie. But I didn’t chat with Jackie. Women are very kind of protective of the situation that they’re in. So they don’t chat.

“Jackie Kennedy… the most amazing guiding light in the world! Talk about punk rock! Wearing that great, pink outfit… getting off the plane? Waving to the world! Blood and guts all over her! Refusing to take the outfit off? Dignity and grace her whole life!”

Jackie in another pink outfit… 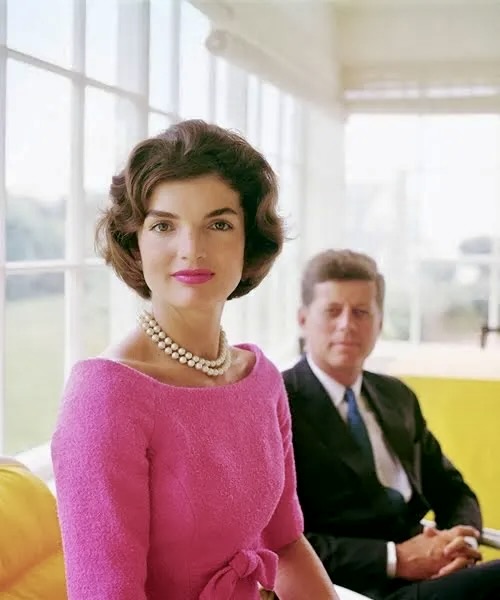 2 thoughts on “Jackie In Pink”