In the early days, it was very lonely being a Sparks fan.

It was difficult to find anyone else who loved them as much as we did.

Now the world is in on our big, wonderful secret.

The two intriguing oddball Mael brothers have grown to become our family members. So many people have expressed how Sparks saved their lives in tough times, and have said that their music speaks to them emotionally. Now Ron and Russell can feel the love shining back at them, after the decades of joy that they have given us. This transcends all else. This is our gift.

It is our long-time dream come true to see Sparks on their victory lap across America (soon worldwide), on the great success of their award-winning musical film Annette, and the incredible Edgar Wright film about the band. The Sparks Brothers documentary has finally brought them to the masses with the tag-line “Your favorite band’s favorite band.”

I have been attending Sparks concerts since I was a teenager 1975. The shows on this tour have gotten the most manic crowd reaction ever. The sold-out venues are filled with fans dressed to the nines in Sparks badges and regalia.

The shows in every city are like raves! Ron Mael’s nightly dance is wackier and more joyous than ever. His brother Russell’s vocals are still impeccable – perfectly sustaining every beautiful high note. 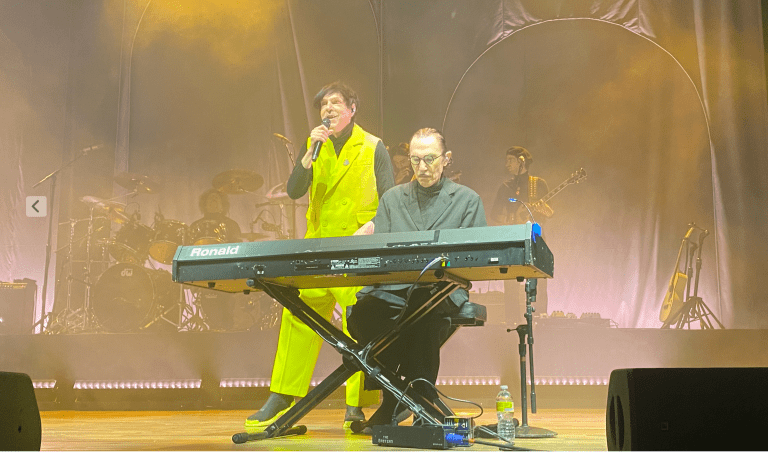 Two gray-haired fans seated behind me in their 70s were discussing their favorite Sparks songs with the teenagers sitting next to them. This closing of multi-generational gaps is an incredible phenomenon. The fact that Ron and Russell Mael are now in their 70s, and that we are all gathered here watching a Sparks concert is miraculous! Some attended with their grandchildren. A tour of Europe will follow, and Sparks have already promised a new album and tour after that!

The two concerts at New York City’s Town Hall were joyous! The set-list spanned Sparks’ entire six-decade career. The appropriate first song is the opener from their musical Annette, ‘So May We Start?’ We heard old and new favorites, and some of the more obscure works including ‘Shopping Mall of Love’ featuring Ron Mael on vocals. There are also songs that were infrequently performed, including the first track on their very first album ‘Wonder Girl’ and ‘Tips For Teens’ from the 1980s. Despite the vast scope of musical styles, it all gels as a performance because the work is all so extremely unique – and undeniably SPARKS!

Though Sparks are known for songs with clever and witty lyrics, one of the most simple, ‘Music That You Can Dance To’ gained more points during the live performance. The crowd went wild! The most uplifting moment was the gradually building, swelling, mesmerizing and poignant ‘My Baby’s Taking Me Home’ – the lyrics of which consist only of the song’s title, infinitely repeated (and a transcendent bridge).

Heavily featured is Sparks’ most recent years of work, retaining  favorites and surprises from past decades. Although it was not a greatest hits set, every song was able to shine equally in the light of this wonderful backing band, the anchor being long-time Sparks drummer Steve Nistor, and the superb quality and clarity of the acoustics! ‘No. 1 Song in Heaven’ benefits from Nistor the most – morphing from its original form as a Moroder dance piece to a gorgeous and thunderous masterpiece. It’s the perfect backdrop for Ron’s hilarious quirky dance segment.

Using only two props for the evening (the whistle at the start of ‘Get in the Swing’ and a mirror during ‘I Married Myself’) Russell easily entranced us with his amazing stage-presence stunning vocals, and dazzling bright yellow pants.

COVID has deprived us of a tour for Sparks’ incredible album A Steady Drip Drip Drip which they thankfully released in the midst of the pandemic. Three songs from the album were highlights of the evening, the wonderful ‘Lawnmower,’ ‘Stravinsky’s Only Hit’ and the finale ‘All That,’ which is their most emotionally charged song. The lyrics speak of a relationship, but they are also (as Russell said while introducing the song) about the struggle, the relentless persistence and triumph of Sparks, which includes all of us!

In the 1970s, it was unfathomable that ‘This Town Ain’t Big Enough for Both of Us’ (a song that is now more than 50 years old) could possibly become the jingle of an ad campaign for a product of the future… the new iPad Air!

Congratulations to my dear friends Ron & Russell Mael for finally achieving what I had wished for them as a young teenage fan decades ago. 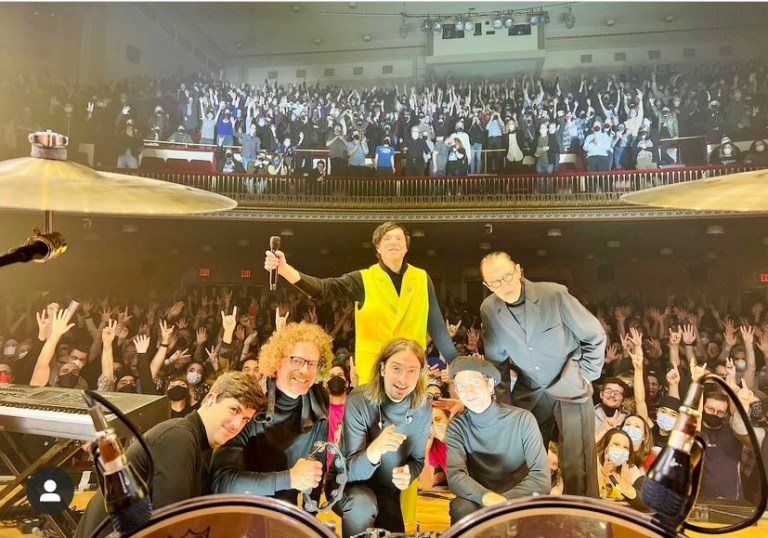 SETLIST
So May We Start
Angst in My Pants
Tips for Teens
Under the Table With Her
Get in the Swing
I Married Myself
I Predict
Wonder Girl
Stravinsky’s Only Hit
Shopping Mall of Love
Johnny Delusional
(FFS cover)
We Love Each Other So Much
Edith Piaf (Said It Better Than Me)
Lawnmower
Music That You Can Dance To
The Rhythm Thief
Never Turn Your Back on Mother Earth
When Do I Get to Sing “My Way”
My Baby’s Taking Me Home
The Number One Song in Heaven
This Town Ain’t Big Enough for Both of Us
Encore:
Suburban Homeboy
All That

What the fans are saying: 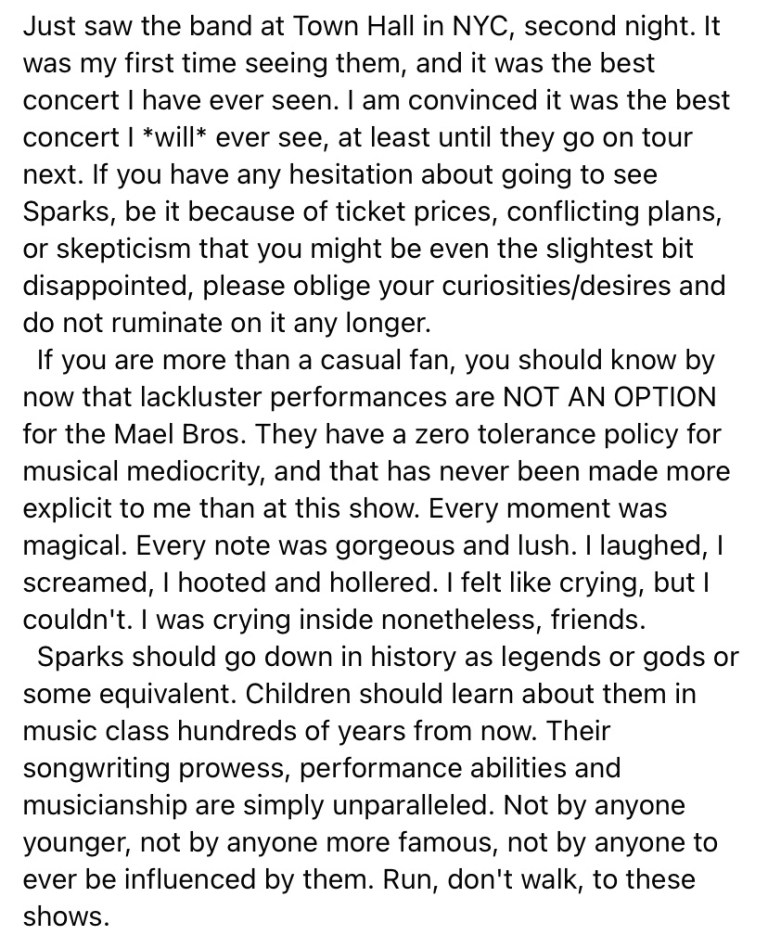 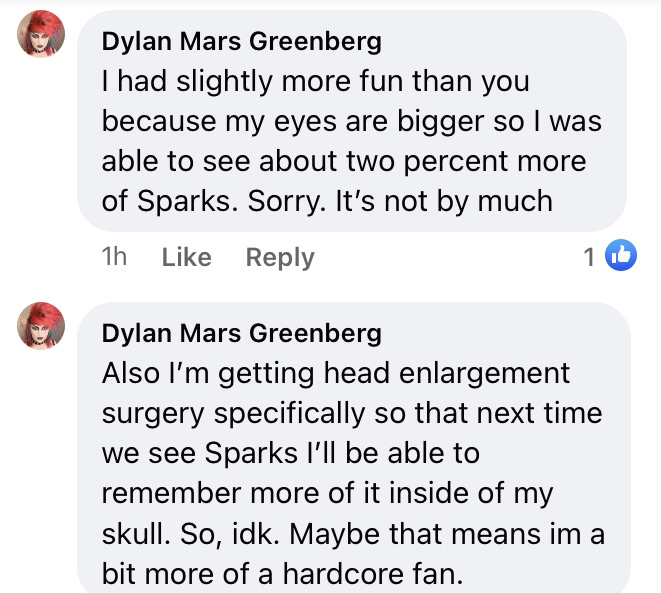 As there was no after-show gathering due to COVID,

here we are through the years

5 thoughts on “SPARKS MANIA IN NYC!”