On this sad day of the funeral of Queen Elizabeth II,

I have learned the truth about something that has perplexed me for a long time.

I always wondered why the queen always carried a pocketbook. She is holding one in almost every photograph ever taken of her. It was not a very majestic look. The queen’s staff carried her train, her crown and other things, so why not her purse? If I were queen, I would definitely assign someone nearby to carry all my essential items, so that I could be hands-free. 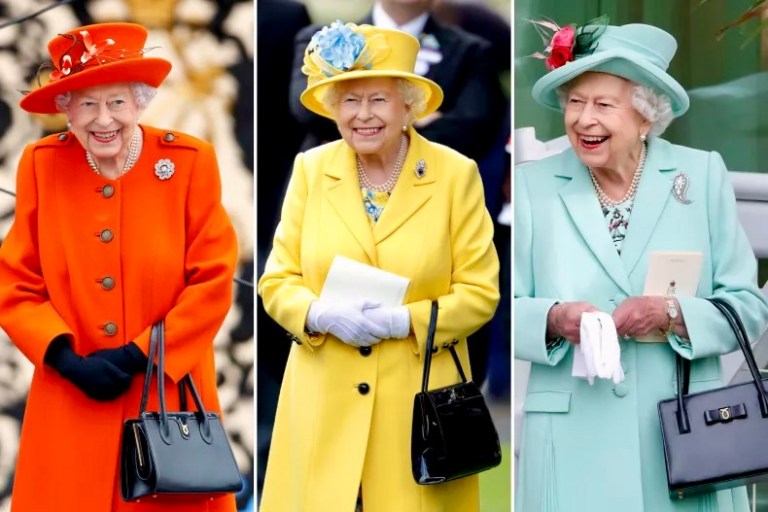 I understood why the monarch dressed from head to toe in the same bright, uniform color – to be seen clearly from afar. One of the Queen’s most famous and literal remarks was, “I have to be seen to be believed.” But why did she need to be seen toting (what I thought was a generic pocketbook, not even flaunting a designer bag) through all seven decades of her reign? What was in there anyway? Perhaps tissues, makeup, her cell phone? Well, here are the answers…

The queen actually did have designer handbags on her arm, owning upwards of 200 of them, made by Launer London. She prefers the black leather Royale or the black patent Traviata style. Launer bags became part of the royal family’s collection in the 1950s after the Queen Mother purchased one.

For those fortunate enough to hold one, Royal Warrants continue to be the ultimate seal of approval and prestige, that recognises those that are regular suppliers of goods and services to specific members of the Royal Family.

In the United Kingdom, three members of the British Royal Family can bestow a Warrant to companies or tradespeople; The Queen, the Duke of Edinburgh and the Prince of Wales. The Warrant allows the supplier to display the Royal Warrant crest and promote its association, this alone provides huge prestige…

The Warrant is a sign of excellence, quality and patronage which Launer has enjoyed for more than fifty years. It is highly treasured and awarded by Her Majesty The Queen, whom Launer has supplied with handbags since 1968.

Her Majesty is quite possibly the most photographed woman in the world and usually always carries a Launer bag with its recognisable signature structured shape. 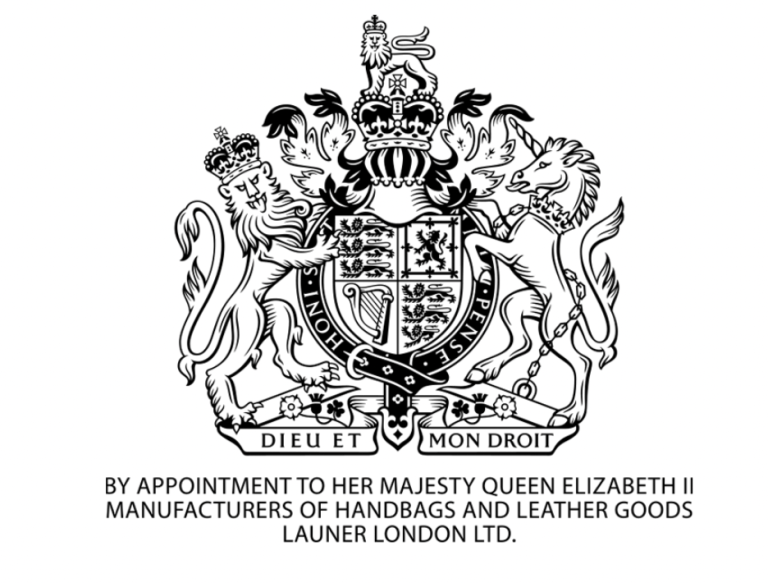 The Queen’s purse was a highly necessary fashion feature. It served multiple purposes and sent very important signals to her entourage! In a way, it was like Felix the Cat’s bag of tricks! The “wonderful, wonderful cat” used his magic yellow bag with emblematic black designs to escape from danger or from sticky situations and only used this power for good deeds. His bag morphed into whatever form of escape he needed in each cartoon (expandable stairs for example).

Simpler drawings show the markings as black X’s, but a closer look reveals the pattern to be black dots and near-floral, four-point stars. Could Felix’s bag be the blueprint for the Louis Vuitton pattern? He claims that it was influenced by Japanese family crests.

The queen also used her purse as an important rescue signal to her staff, placing it in various positions indicating the exact time or manner by which to release her from company or conversations that went on a bit too long. If she switched the purse from her left arm to her right, her staff knew that it was time for them to step in. Placing her bag on a table meant that intervention should be taken within five minutes. Placing her bag on the floor was a more urgent signal to immediately liberate her from the rambling discourse of a dignitary, a celebrity or a world leader. I wonder if she had developed callouses on her arms from all this bag-carrying!

If I had ever met with the queen, I would check all the news footage to see which method of quick escape that she had taken from our meeting! 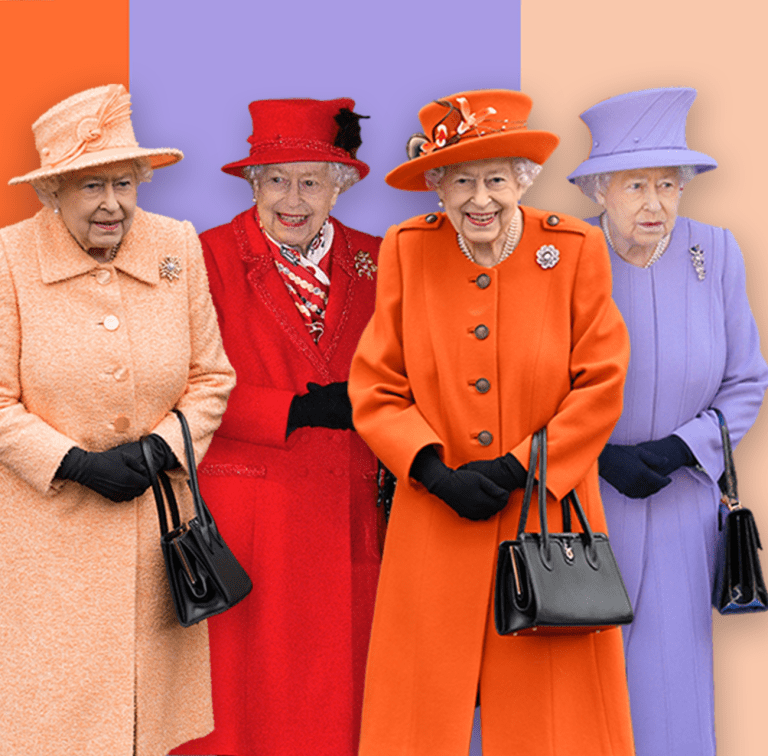 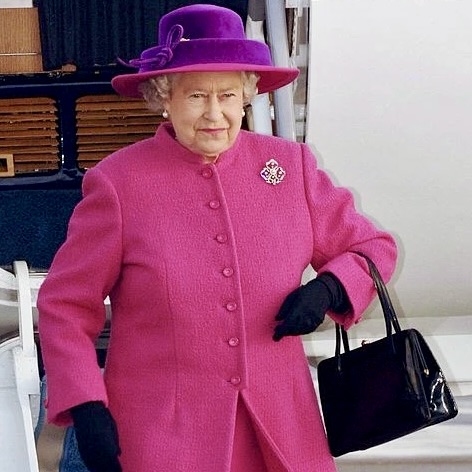 I suppose now that she is no longer with us, and that we will now have at least three successive kings, the very useful secret purse signals will no longer be needed. I might start using this clever ruse myself!

The royal biographer has disclosed the contents of the queen’s bag; a mirror, lipstick, mint lozenges, a fountain pen and reading glasses. On Sundays, she keeps a crisp, ironed  £10 note (with her picture on it, of course) for a church donation. She certainly did not have to carry keys to her queendom, nor a credit card.

Royal commentator Richard Fitzwilliams said that the queen would sometimes carry a pair of gloves in her purse when she knew that she would be shaking a lot of hands “for protection and to stop the spread of infections.” A royal cousin, Jean Willis, noticed that the queen carried a portable hook in her bag. It had a suction cup, so she could hang her bag up wherever she went.

My favorite purse item is the marmalade sandwich that the queen showed to Paddington Bear in her recent Platinum Jubilee teatime video!

This shows us that her purse was not much larger than a piece of toast! 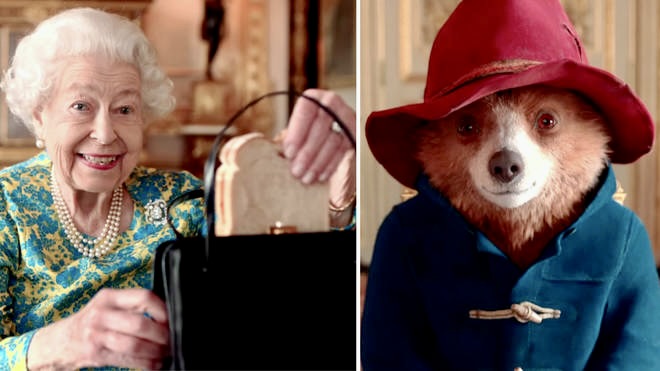 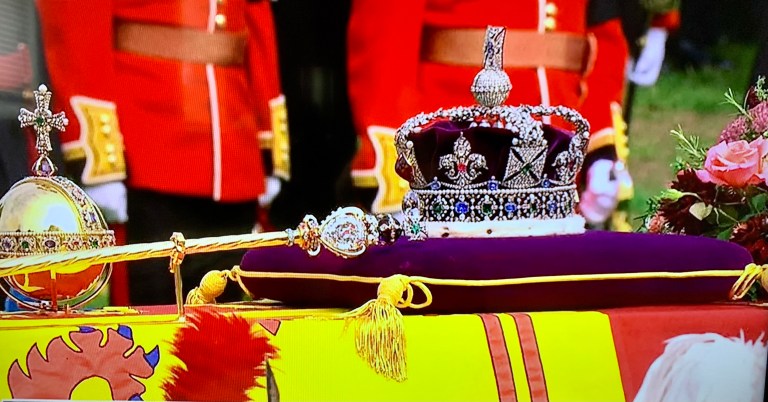 There must have been several more purses made for the Queen’s body double!

© Madeline Bocaro 2022. No part of these written materials may be copied, photocopied, reproduced, translated, re-blogged or reduced to any electronic medium or machine-readable form, in whole or in part, without prior written consent. Any other reproduction in any form without permission is prohibited. All text written by Madeline Bocaro on this site is protected by United States copyright law and may not be reproduced, distributed, transmitted, displayed, published or broadcast without written permission.

3 thoughts on “THE QUEEN’S BAG OF TRICKS”