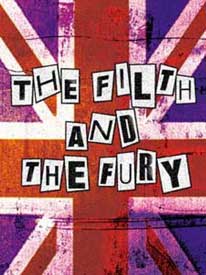 The Filth and The Fury – DVD

The Filth and The Fury is an exemplary film about an significant period in British history – the 1970’s. It should be shown in every high school history class. Director Julien Temple gets another crack at the Sex Pistols as his subject after 1980’s “The Great Rock n’ Roll Swindle”, but with a new twist – humanity.

Though they were hygienically and linguistically foul, the racket the Pistols made was pristine and clear in its intent. Though the lyrics were snide and bleak, they were a mad celebration of youth and rebellion. The music was actually quite melodic and uplifting, probably due to bassist Glen Matlock’s love of the Beatles. The chorus of “No Future” was a glorious anti-national anthem, sung with exuberance and joy despite the fact that the message was a pessimistic one. The dirge-like “We Shall Overcome” was sung by Martin Luther King’s followers with poignant sadness, yet the Pistols’ “No Future” was chanted in pure hopeless reverie – against the monarchy, against youth repression, against discrimination, and against disco. Watching people in flares trodding through all the trash in London’s streets during the garbage strike, Rotten saw they were clearly missing the point; “Wear the garbage bag!” The Pistols’ punk fashion; ripped and pinned clothing was actually created out of poverty.

It is a humourous and touching film as well, especially when Rotten comes to tears while speaking of Sid’s demise. Who would have thought that the closest bond in the band would be between Rotten and Vicious. The narration was by each band member in silhouette – clearly illustrating their feeling that they had all been rape victims. The rapist himself, manager Malcolm McLaren is represented by a respiring black rubber mask – the bondage that restricted the band. Juxtaposed throughout are scenes from British comedy shows from which Rotten amassed his wide range of spectacular facial expressions, and scenes from Richard The III, in which Laurence Olivier spouts lines perfectly coinciding with the Pistols’ own story. After all, they had an exceptional sense of theatrics.

Whether floating down the Thames on a barge playing “God Save The Queen” on the day of the queen’s Silver Jubilee or performing for missile-tossing rednecks in Texas, the Pistols remained resilient and allegiant to their kamikaze mission All the energy put into banning them both in the UK and the US forcing them to play under assumed names caused more of a sensation than the harmless Pistols would have ever caused on their own.

The live concert footage (overdubbed with studio tracks) is remarkable, especially a charity party the band played at for children of firemen who had lost their jobs. Rotten proclaims it one of the best times he had, being lovingly covered in cream pies by very young children as he sang, “Mommy, I’m not an animal”! Quite touching.

The band’s moniker was conceived by McLaren to depict A Clockwork Orange sort of maniacal youth gang; a pack of sexy guys brandishing weapons, but the Pistols were actually too charmingly laughable to pull off that image. The shots of the band as cheeky kids with mischievous smiles against a soundtrack of the Pistols’ dauntless anarchistic diatribes on television depicted their genuine innocence. All they really did was tell the truth, and as Rotten says, “We declared war on England without meaning to.”