After a brief incarnation as Moonbaker Abbey in 1967, the young Mael brothers formed Urban Renewal Project with a couple of friends. They recorded some unreleased songs including “A Quick Thought”, “As You Like It”, “The Windmill” and the futuristic “Computer Girl”. In their hometown of Pacific Palisades California, Ron and Russell re-named the band in 1968, committing commercial suicide before recording their first note by calling it Halfnelson, after a wrestling hold.

Still in their high school years, both handsome charismatic brothers had long, curly hair. Ron already had his trademark moustache, keyboard and maniacal stare. Their friend John Mendelsohn joined on drums. Earle Mankey played guitar, and Russell doubled on bass and vocals until Ralph Oswald later joined on bass. They soon produced a full LP acetate, containing the strangest recorded sounds ever made – supposedly the result of the Mael brothers emulating their idols, the early Who and the Kinks (whose clever lyrics were sung over a powerful, thrashing sound). The result was none too similar, but it sounded fine to the Maels.

The 12-song acetate, financed by manager Mike Berns was a complete album. Only two of these songs (‘Roger’ – Russell’s first major composition, pre-“Pineapple” – and “Saccharine and the War”) in completely different versions, later appeared on the actual Halfnelson LP. (The acetate was called A Woofer In Tweeter’s Clothing, which later became the title of Sparks’ second album).

The official Halfnelson album cover was described by Russell (Sparks Official Int’l. Fan Club, Vol. 19 No. 6): “It wasn’t Grace Kelly, but rather a woman model who was showing off a brand new 50’s car on a promo photo from an old car show brochure. We cut our photos into that photo. We actually went to the legal step of asking permission from the auto company before using the photo. Kind of like an early form of sampling.” The artwork was later replaced with the brick wall cover/band shot, designed by Ron. “It was packaged in a large rectangular box resembling a restaurant checkbook. A hand-written bill – ‘$100,000 For One Halfnelson Album’ was scrawled on the checkbook. Inside were photos, a bio and the vinyl disc. We always subscribed to the theory that the packaging was an essential part of one’s presentation, even at this stage when we didn’t know what the hell we were doing.”

Was that really Grace Kelly in the car and if so, why didn’t she take legal action?

Russell: No, it wasn’t Grace Kelly, but rather a woman model who was showing off a brand new 50’s car on a promo photo from an old car show brochure. We cut our photos into that photo. We actually went to the legal step of asking permission from the auto company before using the photo. Kind of like an early form of sampling.

Later when the band’s name was changed to Sparks, the original Halfnelson cover was replaced by the brick wall artwork/band shot.

The twelve song subjects ranged from an evasive “Landlady”, to women competing for a prize at a fair in “Arts & Crafts Spectacular” (which Morrissey released in 2003 on a CD of songs that inspired him, called Under The Influence). In “The Animals at Jason’s Bar & Grill”, a moose, a dog, a mouse and a deer appear at the door and startle the dining patrons. Diners drop their burgers in panic and suspense until, at the end of the song, the moose simply asks for change of a quarter. The only reason these tracks resembled psychedelia is because they sounded like the band members were on acid. The debacle here is that they were not!

Todd Rundgren was convinced by his girlfriend (Miss Christine of the GTO’s  – whose affair with Russell probably slightly swayed her opinion of their music) to produce the Halfnelson LP for Bearsville Records. Actually, Todd liked the strange four-song demo he received. According to Ron, “We sent the tape to Rundgren because he had satin trousers and we thought that was a sign of sharpness on his part.”  When Todd flew to Hollywood to meet them, he was enamoured by the live show the band performed just for him, complete with props and canned applause. Rundgren brought his producer/engineer Thaddeus James Lowe to see the band practice at The Doggie Bunk Bed Factory, which is exactly what it was! Todd secured a contract with Bearsville, and produced Halfnelson’s eponymous debut album in 1971.

After the recording of the demo album, the final band lineup for the released record consisted of Russell on vocals, Ron on keyboards, brothers Earle and Jim Mankey on guitar and bass, and drummer Harley Feinstein.

The band’s name and album’s title upon re-release in February of 1971 were both changed to Sparks, prompted by Bearsville’s head Albert Grossman. He had originally suggested the Marx Brothers. (Grossman dissuaded the Maels from using the band name Chinese People, after a phrase W. C. Fields uttered in a film). ‘Wonder Girl’ hit No. 1 in Montgomery, Alabama. The band played at Mormon dances, high schools and delicatessens across America, and a stint at L.A’s Whiskey A Go Go.

Bearsville’s bio on the band prophetically begins, “Mostly, Sparks are somewhere else entirely.” It prophetically continues, “American Bandstand will never hold them. Instead, someone will have to resurrect Ready, Steady, Go!” That ‘somewhere else’ indeed turned out to be England. There, and in Holland, they played close to 30 shows, and appeared on The Old Grey Whistle Test.

In late 1971/1972 Sparks played live in the US (five nights at Max’s Kansas City was their New York debut) and in the UK, made more TV appearances and gained a substantial following. Performance clips of “Wonder Girl” and “Do Re Mi” on Hits A Go Go (German TV) exhibit a mischievous rivalry between pretty boys Russell Mael and Earle Mankey, who was also quite a poseur. Ron straddled the borderline between glamour and parody (the latter soon prevailed) with his moustache and mascara. Russell knocked himself unconscious with a giant wooden hammer onstage in Houston, Texas. Sparks, again with hammer, performed “Wonder Girl” and “No More Mr. Nice Guys” on American Bandstand (July 29, 1972 – the first of six total appearances on Bandstand over the years).

A second album for Bearsville, A Woofer in Tweeter’s Clothing followed in March 1972 produced by Electric Prunes singer, Thaddeus James Lowe who had also engineered their debut LP and worked with Todd Rundgren in the Nazz. Woofer’s cover shot featured the entire band.

Was this their idea of tweeter’s clothing?

Russell: (Vol. 19 No. 6) “We liked the idea of the front and back covers being nearly identical yet with some unexplained action having taking place on the back. And the black and white photos were hand-tinted by Larry Dupont allowing me to have two different color checked suits at no additional expense.”

Even less commercial than the unconventional first album, it was decided that no U.S. single would be released from Woofer, the first in a succession of senseless marketing strategies that were surely deliberate. ‘Wonder Girl’ from the first LP was released instead, although their new cover of “Do-Re-Mi” would have sufficed. The band appeared on the UK’s Old Grey Whistle Test to great acclaim. Sparks headlined at London’s Marquee club. But back in the states, Sparks’ manager regretted that there was nothing more he could do for the band. Then, upon Island Records’ show of interest in Ron and Russell, the American band members were left behind and the Maels moved to England to record Kimono My House. The rest is history! 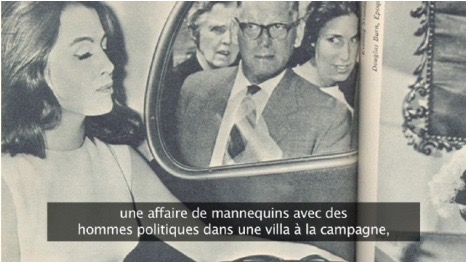