© Madeline Bocaro, 2005. No part of this site may be reproduced in whole or in part in any manner without permission of the copyright owner. 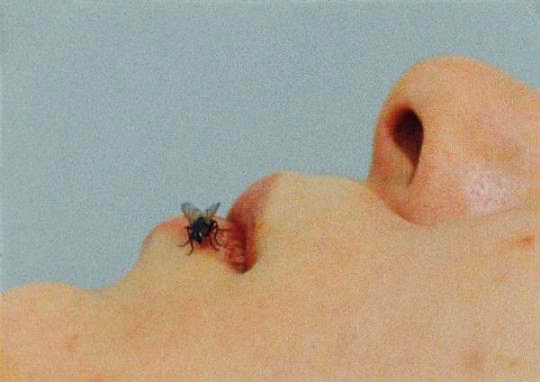 The star of Yoko‘s film had many stand-ins. This was partly because the actor was incompetent, and mostly because it was an insect – a fly! There were actually a few hundred uncooperative little buggers on set. The naturally frantic flies had to be controlled for their performance, using CO2.

Their co-star, Virginia Lust had an interesting part. She portrayed the set. The fly/flies walked along the landscape of her body – the curves, craters and ridges. The actress remained completely still while John Lennon and Yoko Ono placed drunken flies on her body and began to roll camera with long takes, then close-ups. In some scenes, a lone fly would peruse Lust’s curvy landscape; a mountainous breast, a hilly nipple, a long arm of road. In other scenes, several flies explored her titular terrain. It’s a miracle that the actress managed to remain completely still – perhaps she was under the influence of CO2 as well!

In 1970, co-directors John and Yoko filmed the 25-minute movie, Fly in a New York City apartment in two days. They were assisted by filmmakers Steve Gebhardt and Bob Fries upon an introduction by independent filmmaker Jonas Mekas. The film was edited at the Regency Hotel.

Fly screened with another Ono film,  Up Your Legs Forever during a three-night John and Yoko mini-film festival at the Elgin Theater, New York in December. They later made a shorter edit to show at Cannes (along with another Joko film, Apotheosis). Bunuel and Dali must have loved it!

“The idea of the film came to me when I thought about that joke where someone says to a man: ‘Did you notice that woman’s hat?’ and he’s looking at her bosom instead. I wondered how many people would look at the fly or at the body. We’re always sort of deceiving ourselves about what we’re really seeing.

I tried when filming to accept all the things that showed up, but at the same time tried not to make the film too dramatic. It would have been very easy for me to have made it become pornographic, and I didn’t want that. Each shot had to project more than a pretty image of a body, so it was used more as an abstract line.”

A lonely fly rushes around, making inherent jerk-motion stops and starts. More and more flies dot the scene, scurrying in all directions. In close-ups, the female body is obscured by detail – a curve here, a mound there… We forget that we are looking at a naked body. Our eyes meander along with the flies for twenty-five minutes, as the female symbolically lies there, taking whatever comes. In essence, Flyis an early feminist film.

Yoko is challenging our collective psyche, showing us that we are not really sure what our eyes are attracted to – the body or the fly.  Taking this further, it could apply to our focus and perspective on whatever we are looking for in life.

The film ends with a long shot of the entire scene (we see the full body of the girl, dotted randomly with several flies) our gaze is taken upward, as if we are the fly. We leave the room through the window, soaring over New York City rooftops, then ascending higher in the sky, bathed in hazy blue light. At the start, the flies utilized the human form as a giant landscape. At the end, our bodies are now miniscule from the flies’ perspective as they soar above the city.

The soundtrack to Fly (which appears on Yoko’s 1971 album of the same name) consists of her imagined vocalizations of a fly – in a little fly voice – at times calm and then suddenly frenzied. The flies’ movements, along with Yoko’s vocal depiction is quite uncanny – as if they were taking direction and following her lead! John accompanies Yoko on guitar – in forward and in reverse.

“I just want the cameras to always concentrate on the fly so the film is ABOUT the FLY!!”

The concept of Fly derives from a Yoko Ono’s Thirteen Film Scores – London, 1968.

Let a fly walk on a woman’s body from toe to head and fly out of the window.

Fly was also an instructional piece in Yoko’s book Grapefruit (1964):

Yoko also utilized flies in her conceptual art show at the Museum of Modern Art in New York City, December 1971.

Yoko advertised her Museum of Modern (F)art exhibition at MoMA in The Village Voice. In a film depicting the proceedings, a man with a sandwich board stands outside, interviewing people as they exited the museum. The board stated that flies were put in a glass container the same volume as Yoko’s body, which was then placed in the middle of MoMA’s sculpture garden. The flies were released, and a photographer documented their travels around the city. The catalog identified locations where the flies had been, with arrows indicating the precise location. The flies were identifiable by the smell of Yoko’s favorite perfume, which was placed in the container. Handbills invited passers-by to join the search.

And Yoko is still flying…

Fly in your dream.

See how clear the world really is.

See how you never miss a turn.

Try to remember the feeling

when you are awake. 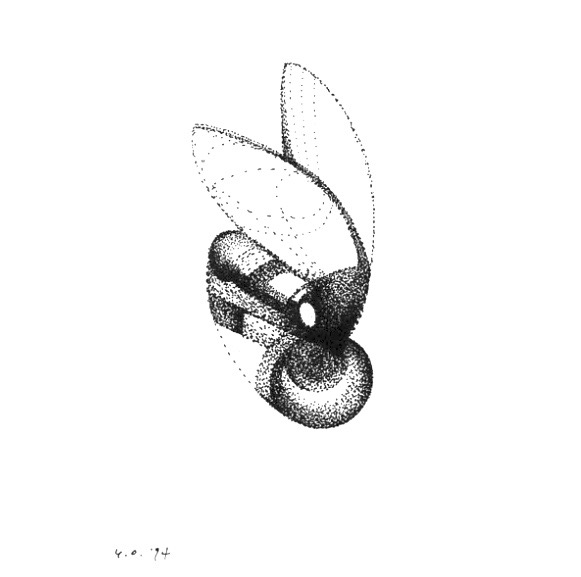 The Making of Fly