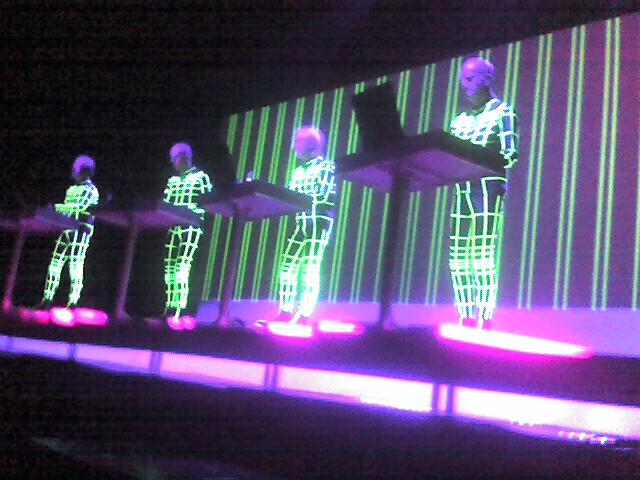 Kraftwerk play live in New York with the frequency of a comet –
approximately every seven years, and each performance is a rare treat!
The original Man Machines took the stage, first in silouhette behind
the curtain, then fully revealed in their suave matching gray business
suits. They were dressed for work, the Hammerstein Ballroom was
transformed into their office / laboratory and it was business as
usual. There is no ‘cute one’ nor ‘witty one’ in this group! Each
uniformed man stood rigidly, masking his humanity behind his own
laptop computer, a far cry from when the band would transport their
entire studio from Dusseldorf. Next time around, their entire
presentation will probably be contained in a device the size of an
iPod Shuffle!

A huge super-wide cinemascopic screen presented illustrious retro
and futuristic films portraying each song’s theme. During the ‘motion’
set, we went winding through the French mountains with thousands of
cyclists during ‘Tour de France’. Endlesss roads, German cars and road
signs appeared during ‘Autobahn’ (‘Fahren, Fahren’, Farhen = ‘drive, drive drive’) with more cool travel scenery based on the memorable yellow and blue album cover art. The kling-klanging of ‘Trans Europe Express’ took us chugging across the tracks of Europe
– metal on metal. Kraftwerk’s live sound is much edgier and even
funkier than on the records, which made us all really want to rock out!

After awhile you wonder what the guys are actually doing behind
those computers. There is no need for any of them to sing, and all of
the music is pre-programmed. Aren’t they bored up there? They seem to
be concentrating very seriously on something – oh – they must be
trying to out-bid each other for vintage tin toy robots on eBay! One
or more of them could easily have taken a bathroom break without a
pause in the proceedings, but who cares! Kraftwerk is a well oiled
machine!

The hauntingly beautiful ‘Radioactivity’ with its clicking Geiger
counter causes one to forget that Radioactivity is a harmful thing.
The twinkling, tinkling ‘Neon Lights’ was mesmerizing as usual, as was
‘The Model’ with weird scenes of 1950’s high fashion.

For the encore, the K-men return in their black and lime-green neon
tubed Spiderman leotards, which outline their unearthly skeletal
structures. So, they are not human after all! They perform ‘Elektro
Kardiogramm’ with lyrics, dizzying cardiorhythmic waves and charts
flashing across the screen in yellow and black. (I guess ‘Colonoscopy’
wouldn’t have been such a glamourous song title). During ‘Vitamin’
various colourful pills and capsules float and dissolve on-screen, as
the names of various nutritional supplements are uttered in monotone
amidst more blips and bleeps.

That’s what I love about this band. There is absolutely no social
commentary on the subject matter. It is just an idea or a single word
presented in a controlled, formulated repetative manner, never
breaking form, without any political agenda nor questions asked. ‘I’m
the operator of my pocket calculator – blip bop’. ‘We are the
robots…blip blip beep beep earrrrwwwwaaaahhh!’ They could easily do a
duet on ‘Numbers’ with the Muppets on Sesame Street, teaching kids to
count to four in several languages! On second thought, when I played
Kraftwerk tapes in the 70’s at my job in a department store, a
customer complained that the weird music was scaring her baby!

The actual K-werk robots took the stage for ‘The Robots’ of course,
and did some synchronized arm movements. (Imagine passing through
airport customs with your own robot replica!) After two full hours
(they’re always werking overtime) ‘Boing Boom Tschak’ and ‘Musique
Non-Stop’ brought the house down, and our heads throbbed all the way
home!

One thought on “Kraftwerk Live in NYC June 2005”