© Madeline Bocaro, 2006. No part of this site may be reproduced in whole or in part in any manner without permission of the copyright owner.

In the over-indulgent age of Rock Opera came this strange anomaly by Lou Reed – the first and only Rock Novel… his third solo album Berlin. It followed his uber successful 1972 Transformer album.

Everyone expressed their disdain for Berlin’s creepy cabaret – a dismal story about depravity, love, hate and decay. Lush in its’ simplicity, the melancholy orchestral score illustrates a couple’s doomed romance. Prostitution, drugs, betrayal, beatings, suicide, apathy – the whole gamut of Velvet Underground song topics converge in the lives of two wretched people in a decadent city.

The lyrics read as if Brecht and Weil sprayed graffiti on opposite sides of the Berlin Wall. It sounds disturbing even by description, yet the delicate, evocative musical score illuminates the sadness of the story, and it somehow becomes beautiful. We actually start feeling sorry for these people! Through Reed’s detached apathetic narrative, we can clearly see the seedy rooms they live in, the bars, streets and alleys they scour for drugs. Only a true artist can make this happen. Listeners just didn’t get it – for thirty years. 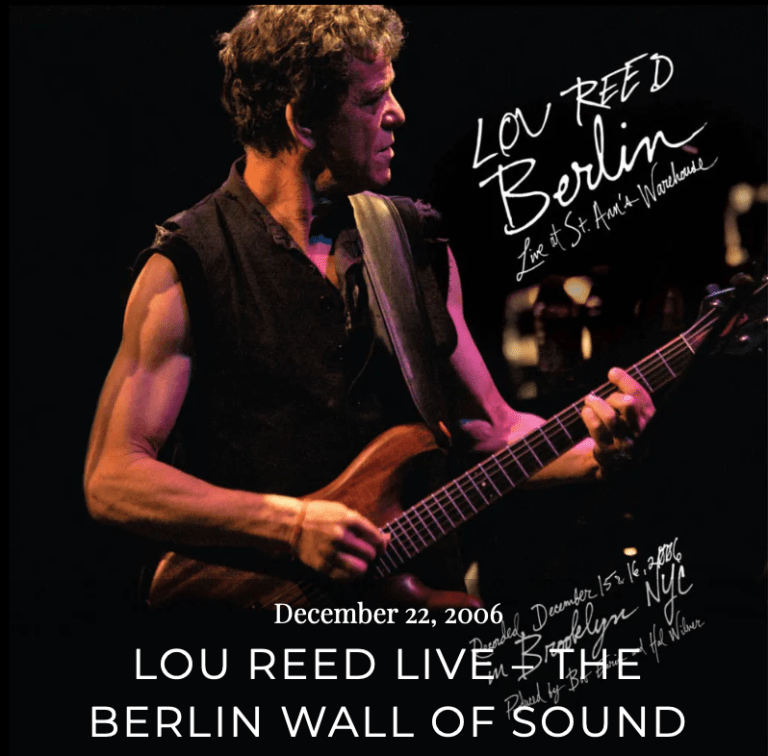 In hindsight, Reed’s masterpiece is given due respect – even by the artist himself now age 64, who just thought of it as “Another one of my albums that didn’t sell.” It apparently took much convincing for Reed to perform the work in its’ entirety at St. Anne’s Warehouse in Brooklyn in December. All four nights sold out quickly. Sets and films were specially created for the theatrical multi-media event by painter Julian Schnabel and his daughter. The album’s original producer, Bob Ezrin (the man behind KISS and Alice Cooper’s early hits, and the other ‘Wall’ by Pink Floyd) is also the musical director of the live show. There is a horn section, and a choir is joined by Antony Hegarty of Antony and the Johnsons. Ezrin is on stage directing the proceedings. (The performance travels to Australia’s Sydney Festival in 2007).

Upon the album’s completion, producer Bob Ezrin had a semi-nervous breakdown and was quoted as saying “I think the best idea is that we put it in a box, put the box in a closet, leave it there and don’t listen to it again.” Musicians on the album, recorded in London included the horns of the Brecker brothers, Steve Winwood on keys, drummer Aynsley Dunbar, and Cream’s Jack Bruce on bass. For the live performance Lou nabbed Steve Hunter (who is also Reed’s classic Rock N’ Roll Animal featured player) on guitar, along with a few of Lou’s long-time comrades.

A friend said, “Oh, you’re going to the Lou Reed show – that should be fun!” It made me laugh. This was not about fun. This is the most depressing album ever made! Of course it bears some of Lou’s sarcastic trademarks. The heroine is on heroin, he rhymes vial with vile, and eye with I, but no amount of unintentional levity can raise us from the depths of despair in this pitiful story.

After a brief overture of “Sad Song” by the astounding young choir, the song “Berlin” begins eerily with warped, ghoulish voices – a drunken birthday party, clinking glasses and slurred voices. A warm on-screen glow is lit by candles. The lilting, bluesy cabaret of the piano is the only sound, until Lou begins his familiar monotone narrative.

In the purely Germanic oom-pah of “Lady Day” we are taken to the bar where the heroine, Caroline sings in her moment of glory. As she walks home, Reed artfully depicts her life with few words; In the hotel that she called home – It had greenish walls – a bathroom in the hall.”

“Men Of Good Fortune” is illustrated by marching military men, poor peasants and workers on-screen. Rich or poor, for better or for worse – and Lou, he just don’t care at all! The song is extended to exhibit the magnificent dueling guitar work of Hunter and Reed. All of the instruments sound exactly as they do on the album. This is a major achievement. It wasn’t like seeing the movie version of a book. It was as though Lou was reading the book (album) to us in his living room by the fire.

After the pulsating intro to the druggy “How Do You Think It Feels” sung in the first person of a succinct, articulate drug addict, (“When you’ve been up for five days / hunting around always / Cause you’re afraid of sleeping.”) Everybody on stage rocks out, including the horn section. During “Oh Jim”, a hateful tale of betrayal another roaring Hunter/Reed guitar exchange ensues.

Read my story all about the song, including an amazing cover version by Howard Tate with Lou on guitar!

‘How Do You Think It Feels?’

The delicate score of “Caroline Says (II)” illustrates the shattering and twinkling of broken glass in slow motion, and an almost soothing, shimmering ambiance during the lines, “She put her fist through the window pane – It was such a funny feeling.” Then comes a cool musical chill during the line “It’s so cold in Alaska” as Caroline, peacefully blacks out, leaving us ‘comfortably numb’.

During “The Kids”, with his eyes closed and intensity on his face, Lou achieved his best ‘donkey gets hit by a train’ guitar solo. With his eyes closed you could see Lou levitate a foot off the stage in his mind, as his instrument brayed in unison with a choir of crying children. It was one ugly/beautiful cacaphonic moment among many this evening. “In the alleys and bars, no she couldn’t be beat – that miserable rotten slut couldn’t turn, anyone away. They’re taking her children away.”

In “The Bed” Caroline’s suicide is explained…”And this is the room where she took the razor, and cut her wrists that strange and fateful night – And I said, oh, oh, oh, oh, oh, oh, oh what a feeling.” Then the choir achieves the supernatural. It is ghostly and ghastly, eerily rejecting our heroine from heaven and taking us with her into the beyond for a moment, capturing that exact spooky, ethereal feeling from the record. Amazing!

The strings and choir tear at our hearts in the beautiful eulogy “Sad Song” which goes on and on until we are emotionally exhausted, and when it’s over, we wish it wasn’t.

About Berlin, in his usual sarcastic, deadpan Warholian delivery, Reed told The New York Times, “I’d never been there. It’s just a metaphor. I like division…

I had never been to Berlin when I wrote Berlin. It was an imaginary journey. I couldn’t even go coach.”

“It’s now called classic. My albums have continuously gotten seriously panned and then, twenty years later, they’re re-released and they say ‘this is a classic.'”

The encore was a bit of a let down after the stunning Berlin performance. “Sweet Jane” with R&R Animal Hunter on guitar should have been incredible, but it was slow and without punch. Antony rendered a compelling version of “Candy Says”, and another sick little ditty, “Rock Minuet” was a mellow treat. It was fitting that the encore was low-key because we were all in such a vulnerable condition after Berlin. Still, this was one of the most important live gigs I’ve ever seen. By the way, it was filmed for a future DVD release.

The next Reed revival on the horizon; Bob Ezrin is working with Berlin’s avant-garde orchestra Zeitkratzer on their version of Reed’s infamous Metal Machine Music!

9 thoughts on “LOU REED LIVE – THE BERLIN WALL OF SOUND”