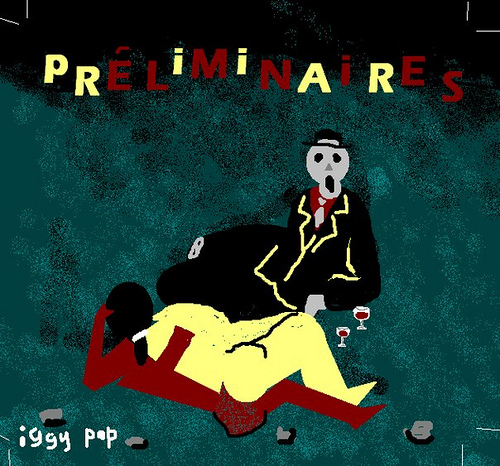 © Madeline Bocaro, 2009. No part of this site may be reproduced in whole or in part in any manner without permission of the copyright owner.

Through all his years of creating unparalleled noise and mayhem with and without the Stooges, it always seemed as though there was yet another strange quieter animal lurking deep within Iggy Pop, begging to be heard.

On his first solo album after ten years with the Stooges (The Idiot, 1977) Iggy revealed a deep, subterranean, creepy yet alluring crooning voice -seemingly from the beyond. In the early 80s his live set included the old Sinatra classic “One for My Baby (and One More for the Road)” a sad, glass-clinking cabaret respite amidst the wild buzz of the rest of his savage show. He serenaded Clive Davis with “The Shadow of Your Smile” sounding like an undead Johnny Cash, sealing his Arista record deal in 1978.

Now, after a 5-year span of Stooges reunion tours, and with the recent passing of riff-master Stooge Ron Asheton, what would Iggy do next, at age 62? The answer is… French jazz, ambient electronica and delta blues! The new songs are based on a 2005 novel, The Possibility of an Island by Michel Houellebecq. Iggy sang and played acoustic guitar in a studio, then shipped his tracks to the musicians. They sent back various instrumental tracks for him to select, over which Iggy croons weird lyrics – like a sarcastic Sinatra.

Preliminaires translates as ‘Foreplay’. The first French words Iggy uttered, warming up a live crowd in Paris were “Bon Fuckin’ Soir!” He has since memorized the lyrics to the 1945 classic “Autumn Leaves” (Les Feuilles Mortes) for this album.

I wish I was French for five minutes – just so I could hear how ridiculous Iggy’s Detroit accent sounds to a native French person.

As Iggy mangles the language of love (‘Separay, onsomblay’), I tip my beret to him for trying!

The bossa nova beat and woeful horn solo are quite lovely.

The jazz standard, “How Insensitive” throbs with a dreamy ambience, while Iggy’s serious yet lame attempt at crooning adds an unintentional irony. The song is (allegorically) the sound of a bull in a china shop!

“I Want to Go to The Beach” has a quiet ambient beauty and sad lyrics, some poetic and some blatant. ‘You can convince the world that you’re some sort of superstar, when an asshole is what you are, but that’s alright.”

“King of the Dogs” is my new favorite song. Iggy’s semi-annual ode to the canine is true to form. With oom-pah brass and horns, clever lyrics and the little howl at the end, Iggy teaches us the joys of being a dog! “I got a smelly rear I got a dirty nose / I don’t want no shoes, I don’t want no clothes…” (Wait… isn’t that about Iggy himself?!) He shares some more deep doggy insight, “I can smell the things that you cannot smell.” Too much information!

The strangest song is “A Machine For Loving”, an acoustic spoken narrative about the death of a pet dog, a replacement clone dog, and the unconditional love of a dog. “Nice To Be Dead” is the sole rocker, an unmistakable nod to Iggy’s old Detroit buddy Alice Cooper.

Then it all begins to fall apart when the continuity is broken. “Je Sais Que Tu Sais” has a cool, pumped up “Nightclubbing” beat, and a cameo by a French girl, reminiscent of Serge Gainsbourg’s lusty duets, but the same song is reprised as “She’s A Business” for no apparent reason. “Autumn Leaves” is also repeated at the close of the album.

Next up for Iggy: A Stooges Version 2 reunion (with Raw Power era guitarist James Williamson) AND an Iggy Pop Christmas album! Santa Claus got my letter!

Listen to the album here: