I, Doll – Life and Death with the New York Dolls

© Madeline Bocaro 2010. No part of this site may be reproduced in whole or in part in any manner without permission of the copyright owner.

I’ve read every book about the New York Dolls so far. They are all wonderfully exciting, due to the colourful subject matter, but this one is special because it is written by an actual talking doll – Arthur “Killer” Kane!

There is a foreword and a long epilogue by his wife Barbara, so I was suspicious that the book might have been ghost-written, or severely edited…but it most certainly sounds like Arthur, and his spaced-out, sarcastic, kitschy sense of humour is written all over it! His posthumous memoir (written between 1986 and 2003) spans 16 months from the earliest formation of the Dolls in late 1971 to their original drummer Billy Murcia’s death in November 1972.

The publisher’s note at the beginning bears disclaimers, due to Arthur’s ‘faulty recollection’ and there are cited notations at the end. However, Arthur’s recollection is far from faulty, as he describes in detail all the wonderful/terrible adventures of his tight-knit band of bumbling superheroes. Although Arthur is sometimes bitter when speaking of ‘our singer’ David Johansen, and spews venom regarding the Dolls’ management team and entrapping contract (he refers to Steve Leber as ‘Slave Labor’), most of the book is full of loving memories and wild escapades. The writing is incredible; witty, imaginative and creative. Arthur was a man of few words, but when he spoke, it was always profound!

The book is just as much a fashion statement as a musician’s memoir. It begins with Arthur eyeing the outrageous futuristic 1970s fashions at the Central Park fountain on Sundays, when all the freaks would proudly display all their finery. He recalls whatever outrageous ensemble he was wearing in every situation in great detail, mentioning every sequin, feather, platform shoes/boots and even the cosmetics. He chuckles at the ensuing sneers and comments by regular folk (on his zebra coat, “Gee the things you see when you don’t have your rifle with you!”). He clarifies that it was not actually drag – the Dolls wore girls’ clothing AND boys’ clothing simultaneously!

What attracted him to approach Johnny Thunders who was ‘oozing charisma’ were his ‘Raggedy Andy from outer space’ threads – things that Arthur was unable to find in his endless scouring of thrift shops.  J.T. (whom he’d frequently seen around town – always dressed outrageously) was a bass player at the time. Arthur proposed a jam with himself on guitar. Johnny agreed. But when Arthur arrived, J.T. was jamming alone on guitar, emitting some electric ‘garage barrage’ sounds with his ‘singing sword’ like none ever heard before. It was Arthur’s great appreciation and reverence of Johnny’s unique sound that caused him to immediately defer to Johnny as the star, so Arthur switched to bass. He is positive that this swap was a blessed and most divine event. Arthur calls his buddy J.T. ‘a real-life Buckaroo Bonzai’ (sp.), a rock-and-roll brain surgeon’. He explains that Johnny’s famous golden singing guitar tone came from his discovery that plugging old Gibson guitars into modern high-volume Marshall and Ampeg amplifiers made them come alive.

Johnny silently repaid Arthur for this ‘promotion’ by giving him a prized ‘Wild Wild West’ cowboy suit circa 1880s. Arthur goes into great detail about how he accessorized his new prized outfit. ‘Woah partner!’ When Arthur saw a bunch of Johnny clones standing outside the Whisky A Go-Go decades later, he realized that these guys had taken over the world!

He speaks of meeting the latest British bands (along with Joplin and Hendrix) at Nobody’s club in New York, and seeing DJ Murray the K’s rock n’ roll shows in Brooklyn – up to 20 bands in one day.

The early Dolls rehearsed in a bicycle shop basement. The owner locked them inside for the duration, so they would not steal the equipment. One night, the door was ajar, and they escaped – with the equipment – up the road to the Hotel Endicott where they found a Christmas party in need of a band. They promptly obliged. This was their first ‘gig’.

Then named Actress, the band was singer Rick Rivets, John Genzale (soon to be Thunders), Billy Murcia and Arthur Kane. Arthur was convinced that these four 20-year old guys who grew up on flying saucers and rock n’ roll ‘embodied a physically tangible musical talent pool worth 80 to100 years of musical knowledge’.

For their first gig as the actual New York Dolls (now with Sylvain & Johansen), Arthur decided on his fashion statement for the evening: no pants (tights only)! This would accentuate his long legs. ‘It was also a first, for all bass players everywhere who came after me (especially women) to feel free to step out of that non-descript obese anchorman /journeyman stage prison.’ He goes on (again) to describe his outfit and makeup in great detail, ‘economical, lightweight and disposable – as well as sexy, funny and comfortable.’

One would think it was utter chaos, but the band would hold meetings prior to each gig, coordinating the outfits from their community wardrobe, and focusing on presentation. “Nobody else would dare to walk around in those days looking like us but us. It was too dangerous to your physical health.” However, if it were not for the hospitality of Max’s Kansas City owner Micky Ruskin, the Dolls would have died of malnutrition.

Arthur sums up the Dolls’ ethics succinctly and eloquently many times in the book, first as ‘frustrated swashbucklers’. “A professional musical extension of The Three Musketeers’ ‘all-for-one-and-one-for-all teenage gang mentality.” / “The Dolls were from the future history of our planet, visiting on a mission of goodwill and cheer.”/ “We prided ourselves on being able to sound like a New York subway car careening off-track, or an out-of-control jumbo jet ready to crash.”/ “The Dolls were chaos agents by choice.”

He describes their first show at the Mercer Arts Center, which led to a 17-week Tuesday night residency there. “The New York Dolls became a band of the people that evening. We were all very accessible real human beings that you could talk to (and/or flit with), not golden idols living in cellophane display cases.” The crowds they attracted included Andy Warhol and his superstars, and their ‘favorite hero from Mars’ David Bowie came to meet the Dolls after a gig, at their favourite seedy watering hole on Canal Street, after his own infamous Carnegie Hall show.

The name Killer Kane came from a positive review, stating that he played killer bass lines. Johnny Thunders proudly put his own new surname on his apartment doorbell. Sylvain Sylvain was a pun on Sirhan Sirhan.

Just after their 17-weeks at the Mercer, the Dolls were offered a tour of the UK. Instead of rehearsing, they fiendishly scoured the thrift shops every day in search of new outfits for their journey. Their UK experiences were not as exciting as expected. They felt sabotaged, ignored by their managers, and were shocked to be performing at the huge Wembley Pool opening for The Faces. There was no time allowed for rehearsal, so they tried on each other’s clothes instead, planning to look more outrageous to compensate. The performance was one of their many UK disasters, leading to the death of their beloved drummer Billy.

Arthur recounts some ridiculous escapades, conjuring up superhero and sci-fi/horror movie imagery. While his friends are all out partying at Max’s one night, in his ‘absynthe-mindedness’, Arthur locks himself out of the Dolls’ illegal loft dwelling tripping on acid. What was ‘a retard in a leotard’ to do? He imagines himself as Cornel Wilde in The Naked Prey, desperately tries to will the keys into his hands by ESP, or “Maybe I could be saved by some unemployed malevolent outer space plants (like in Night of the Triffids).’

Arthur gets to shake hands with Liberace at a posh London party, ‘akin to meeting a celestial godfather Buddha from a parallel dimension.’ He passes out drunk in a closet, missing Liberace’s actual live performance at the party. Writing in retrospect, he gets to say things like, “As a future alcoholic, I was truly impressed.”

Arthur Killer Kane, who hoped and prayed all his life for a Dolls reunion, finally got his wish in 2004 at Morrissey’s UK Meltdown festival. He died 2 weeks after the gig, in July 2004 at age 55. His story is fully documented in the wonderful film, New York Doll – highly recommended! Sylvain summed it up when he said, “We should have called Arthur ‘Sugar Kane’ instead, because he was so sweet.”

It’s wonderful and heartbreaking!!! I highly recommend it!!!

You can watch see it here on YouTube!!
https://www.youtube.com/watch?v=TPqbFcNB3Mo 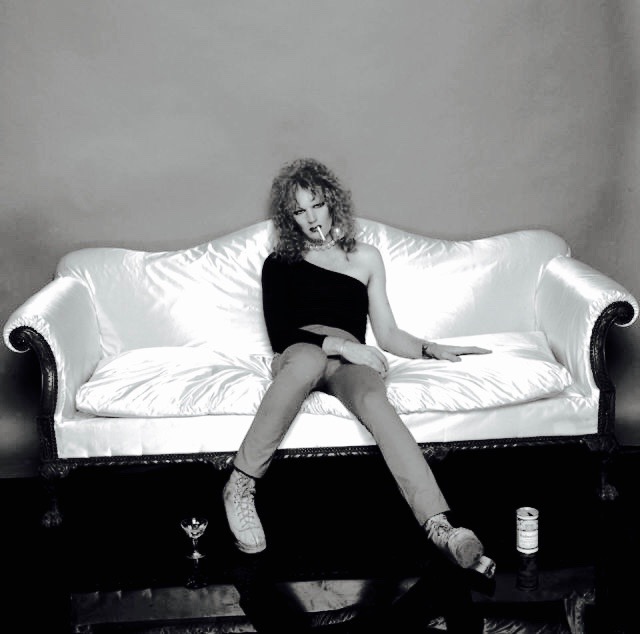 One thought on “Book Review: I, DOLL by Arthur Kane”