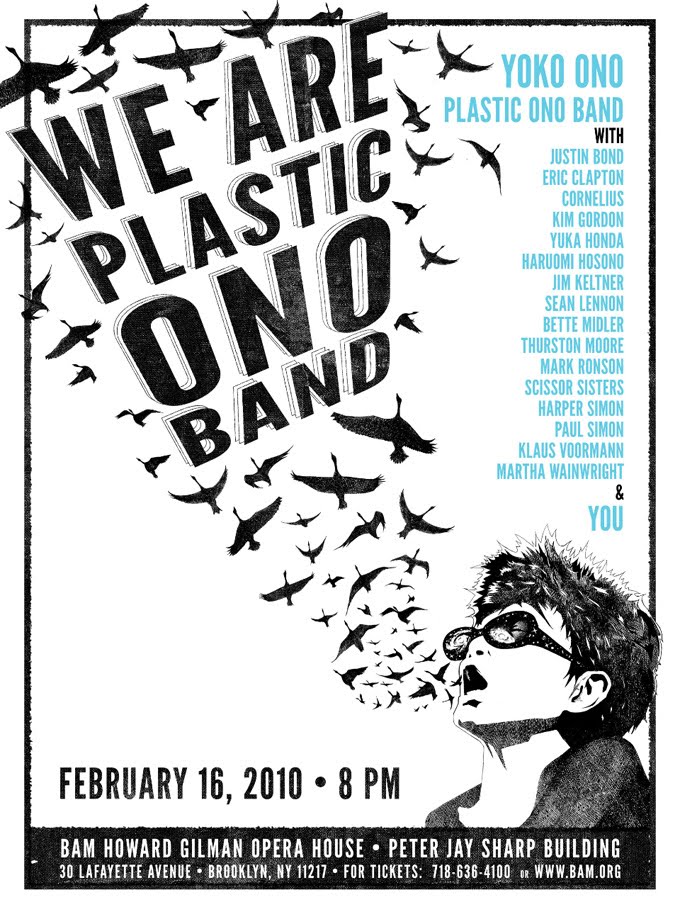 © Madeline Bocaro, 2010. No part of this site may be reproduced in whole or in part in any manner without permission of the copyright owner.

In the 1960-1980s Yoko Ono received a lot of hate mail. However, there were several love letters from me – a young kid – gushing with admiration, and in complete sympathy with every scream she’d ever screamed. Yoko answered all of my letters, thanking me for the encouragement through those dark days.

At last the day has come when Yoko Ono is appreciated for her art, music and work toward world peace. At last, after 50 years, I am now proud to be living on a planet with people who understand that she is special. Nobody believed John Lennon. It took time, and a younger, purer generation with not much space between their heads and the sky. It took the youth of the world who don’t need to imagine peace, but simply live it. This generation (and mostly her son, band mate, and biggest fan and supporter Sean Lennon) have turned the world on to the glory of Yoko.

On the eve of her 77th birthday, superstars and pop stars, young and old, celebrated the woman who WOKE up the Beatles, joining Yoko in the re-formation and expansion of the Plastic Ono Band. The first show was a 3-hour rehearsal / jam, and even more special guests showed up on the second night. The interchangeable Plastic Ono Band was revived for Yoko’s latest album, Between My Head and the Sky, and the core band still has 2 Lennons (Yoko and Sean), and various Japanese musicians including Yuka Honda and Cornelius.

Yoko’s art was scattered throughout the venue; a Wish Tree, Apple, War Is Over! posters, and her 1966 Film No. 4, Bottoms was playing in the lobby. The sound of twittering birds filled the hall, prior to an informative film montage spanning Yoko’s incredible life.

Then she appeared alone, small, glowing and magnificent, singing a capella, ‘It Happened’. The band cranked up ‘Waiting For the D Train’ with Mark Ronson incorporating the bass-line from ‘Why’, and it was full-on from there. The first hour was a pure Yoko fest – including the screamers and the dreamers! ‘Calling’, ‘Between My Head and the Sky’ and ‘Mind Train’ were lengthy free form rock/jazz/funk excursions to places we’ve never been before. The haunting ‘Walking on Thin Ice’ brought back chilling memories.

If suffering produces the best art, then all that this woman has endured in her life has led her to this moment – the accumulation of all the hardship, sadness and loss – and the expulsion of it all in her music. Nobody sings the blues like Yoko. She once explained, “If you are drowning, you don’t say, “Excuse me but I seem to be falling deeper into this water, and I would appreciate if you would be so kind as to help me.”  You just scream, “Argghhhhh!”  And that’s just what she does. Then, at the end of each song, she instantly purges the pain, revels in the wild applause and still seems amazed (after being conditioned by years of indifference) that people actually love her now!

There was a wonderful light-heartedness and warmth throughout both concerts, as Yoko and Sean had conversations with the audience and with each other, explaining the origins of each song with amusing anecdotes, love and laughter.

Of course, there were many delicate moments of beauty, like ‘Rising’ and ‘Higa Noboru’. Yoko sang intensely, mostly with her eyes closed during ‘Moving Mountains’, and you just knew that somewhere in the world, the earth was shifting. At times it resembled the intense, very Japanese soundtrack of a Kurosawa film. The ambience of Haruomi Hosono (Yellow Magic Orchestra) blended beautifully on these songs.

After the intermission, the Scissor Sisters performed ‘The Sun Is Down’. Justin Bond rendered ‘What A Bastard the World Is’. It was hilarious seeing a drag queen, dressed not unlike Liza Minelli in Cabaret, singing the brutal and biting lines from the ultimate (perhaps the very first) male-bashing song – way ahead of its time in 1973!

Kim and Thurston of Sonic Youth joined Yoko on ‘Mulberry’, playing screeching guitars that wept with bows and sticks. We could envision the magnificent sunset as a young Yoko gathered mulberries from the countryside bushes in war-torn Tokyo for her starving brother and sister. She lived through this as a child, finding beauty in a desperate situation, and we lived it with her.

Original POB members, Klaus Voormann, Jim Keltner and Eric Clapton joined Sean and Yoko for the Beatles’ song ‘Yer Blues’. Yoko started out inside a black bag, for old times sake. As we were still reeling from that, Sean announced a song that’s never been performed live before (a Yoko classic from 1973’s Approximately Infinite Universe album) the stunning, bluesy ‘Death of Samantha’.

On the second night, I was living someone else’s dream, sitting in the front row, as Eric Clapton wailed away right in front of me! Several hours of boring technical virtuosity can’t compete with one sincere primal howl from Yoko, but Clapton gets 10 points for showing up and supporting her. He actually rocked out, playing slide guitar on ‘Yer Blues’, and ‘Don’t Worry Kyoko’, and a nice lead on ‘Death of Samantha’.

There were two lovely acoustic guitar duets; ‘Oh Yoko!’ by Sean and Gene Ween, and Paul Simon along with his son Harper gently harmonized on the delicate ‘Silver Horse’ and John Lennon’s ‘Hold On’.

The Plastic Ono Band became the Plastic Ono Orchestra, with a tuba, horn and various strings as Bette Midler arrived to wild applause, and sang a divine ‘Yes, I’m Your Angel’ from the Double Fantasy album. Perfect for Midler, it’s a sweet and campy song that Yoko wrote for John in 1980 when he was anxious about turning 40. Sean explained that Bette had worked out the whole arrangement for the song herself.

The crowd broke into a spontaneous chorus of ‘Happy Birthday’, which touched Yoko deeply. She then led everyone into ‘Give Peace A Chance’, and left us with the undying message of love and peace from John and Yoko.

The very first form of music that existed must have been just like Yoko’s – millions of years ago – before language, before instruments…the first prehistoric bird call, the grunt of a cave man, the first expression of joy or sadness. The music of the future will probably resemble hers as well (whether it be made by humans or aliens) pure and simple. It’s already starting to happen. The circle will eventually be complete.

I am proud to share my time on earth with Yoko Ono, and blessed to have been touched by her. I really hope there is an afterlife for one reason only – so that John Lennon can see all of Yoko’s triumphs, and know that his dream has finally come true. For all we know, he might be behind all of this, wherever he may be.

Between My Head And The Sky

The Sun Is Down – Scissors Sisters

What A Bastard The World Is – Justin Bond

Give Peace A Chance- ALL 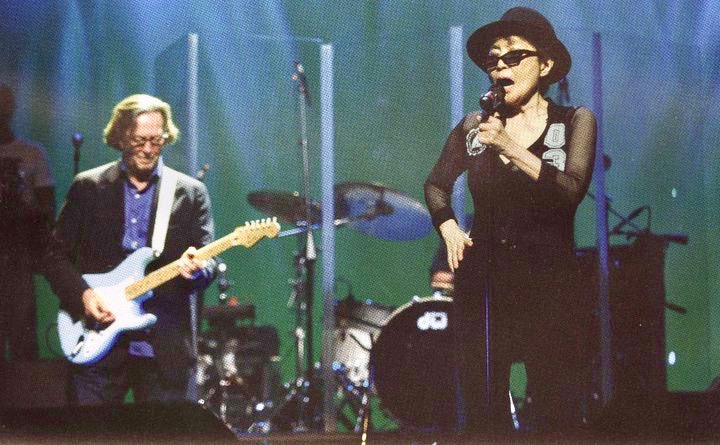