‘Perfect Day’ is a perfect song from a perfect album – Lou Reed’s Transformer (1972). Lou always had a knack for clearly illuminating urban underbellies, mainly New York and Berlin. Reed could eloquently condense the personalities and saga of a subculture into a dark, yet beautiful haiku. He was a master of this – because he actually lived that life.

Transformer was the popular precursor to Reed’s early career killer – the ghostly, ghastly, beautiful and uber-depressing album Berlin, concerning drugs, betrayal, abuse, suicide, sexual depravity, apathy – the gamut of song topics from his former band, The Velvet Underground – converging in the lives of two wretched people in a decadent city. In fact, the last song on Transformer, ‘Goodnight Ladies’ with its horns and tuba herald the sound of Berlin. Although it is meant to resemble a deep brass ‘Oom Pah’ band, the track could easily fit on the Cabaret film soundtrack. 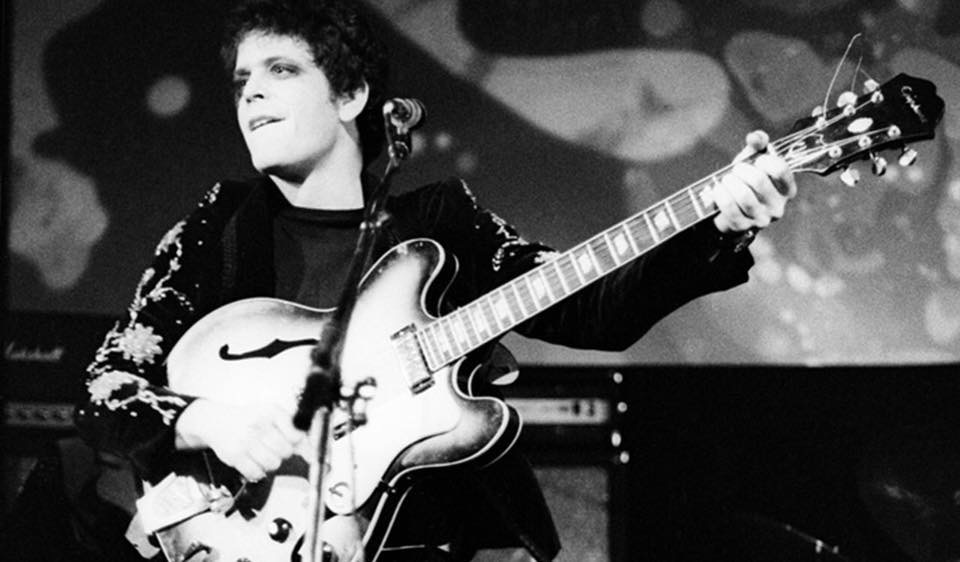 Transformer was an accurate portrait of early 1970s New York City.’s wilder side. Andy Warhol’s superstars (Holly Woodlawn, Candy Darling, Jackie Curtis and Joe Dalessandro) are name-checked on the timeless track, ‘Walk on the Wild Side’. The album was released on RCA’s orange label Dynaflex made with re-ground rather than virgin vinyl – so flexible that you could practically see through it. Transformer was produced by David Bowie and Mick Ronson, who especially outdid himself on piano, and the poignant string arrangements on ‘Perfect Day’.

On ‘Perfect Day, bassist Herbie Flowers switched to tuba, Bowie’s Spiders From Mars bassist Trevor Bolder was on trumpet, adding a cinematic drama to the stunning piano playing of fellow Spider, Mick Ronson. The great Klaus Voormann played all the right bass notes. ‘Perfect Day’ has a contrasting duality – a lovely, serene melody with seemingly innocent lyrics. Yet once again, Lou portrays beauty within darkness. The song is really about a self-loathing guy on a date with the woman he loves.

‘Such a perfect day, you made me forget myself

I thought I was someone else, someone good’

Because this is a Lou Reed song, we are prompted to question; is he on a date with someone dear, or with a substance of choice? Should the line, ‘I’m glad I spent it with you’ read, ‘I’m glad I spent it with drugs’? Could this be why Lou’s day is so perfect? I would think that Lou would probably be more blatant, and would have used the drug name in the song title as with ‘Heroin’ if it were about drugs. The line ‘you just keep me hanging’ on’ could be about addiction, but Reed ex-wife Bettye Kronstad claims that the song is about a date at the zoo in Central Park that she and Lou had, just before getting married.

1995 – Duran Duran covered ‘Perfect Day’ on their album Thank You, reaching No. 28 on the UK Singles Chart. Lou Reed famously went on record saying that this version was his favorite and much preferred it to his own. Kirsty MacColl and Evan Dando recorded the song as a duet.

1996 – The song was used in the movie Trainspotting when the protagonist overdoses on heroin.

1997 – (Re-released in 2000) ‘Perfect Day’ was exploited for the BBC Children In Need Appeal video. Lou Reed joined the likes of  29 artists, including Bono, Elton John, Bowie , Tammy Wynette and a host of other unworthy folk, who over-sang and over-stepped their boundaries, amid sunny-day backdrops. It was sickening. However, it became the UK’s No. 1 single for three weeks.

2001 – It appears in the soundtrack of the independent film Prozac Nation,starring Christina Ricci.

2002 – Reed joins Luciano Pavarotti on ‘Perfect Day’ in May for his Pavarotti & Friendsconcert in Italy. Reed talked, Pavarotti sang. Lou was great. Pavarotti was another story.

2007 – Patti Smith included the song on her covers album Twelve.

2010 – Jamaican group The Jolly Boys did a cool reggae version on their album of cover versions, The Great Expectation.

My perfect day was ruined again in November 2010 when I heard that Britain’s Got Talent winner Susan Boyle was recording one of my favourite songs of all time. It is the lead song on her 2nd album, The Gift.

First there was some confusion when Reed supposedly refused Boyle permission to perform the song on live television (American Idol) at the last minute. Good for him, I thought. Boyle described Reed as ‘childish’ during a UK TV interview.

But the next day, it was reported that Lou didn’t pull the plug at all. It was some other red tape issue. According to a Sony Music rep, SuBo took “creative direction” from the Velvet Underground legend himself when shooting the video, so Lou Reed has been given co-director credit on the clip, which shows Boyle singing through the mist of Loch Lomond in Scotland.

How imperfect it all is! I’ll just stick to my pristine vision of the song – Lou at the zoo in the park, on heroin – maybe.

Reed’s version has never charted, but it was on the b-side of his single, ‘Walk On The Wild Side’ – the perfect single!