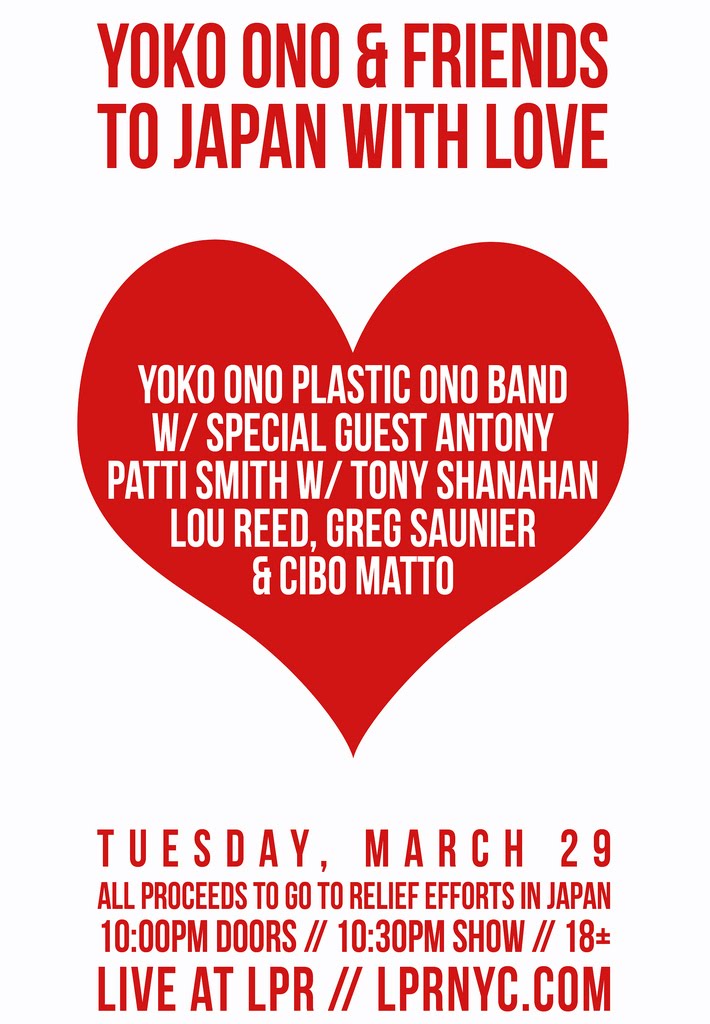 Yoko Ono and Sean Lennon held two benefit concerts for Japan this week, pulling many of their famous friends together to join their Plastic Ono Band. Over two nights $100,000 was raised for Japanese earthquake relief. The first gig was at Columbia University on March 27th. The second one was really special.

As I entered the tiny venue, Le Poisson Rouge on Bleecker Street, I remembered all the amazing times that I’ve seen Yoko’s concerts, exhibits and lectures over the years, and that John Lennon was always right. The sold-out intimate venue held 700 people quite warmly. The immense tangle of wires on the stage was evidence that this would be a very interesting evening!

Patti Smith, New York’s own priestess of prose appeared raggedly yet regally with her full band, including Lenny Kaye. She spoke a heartfelt dedication to the Japanese people, and began the evangelic ‘Peaceable Kingdom’. ‘Beneath The Southern Cross’ followed. Then from her Easter album, ‘Ghost Dance’ chanting it’s appropriate and prophetic chorus of ‘We shall live again’ for Japan. A passionate ‘Pissing in a River’ from Radio Ethiopia followed. Then she dedicated ‘People Have the Power’ ‘To Sean and his mom, who have done so much work for the people, and whose family has always had so much care for the people…’

Sean announced, ‘Yoko Ono has entered the building!’ Within seconds, she appeared, singing ‘It Happened’ acapella. Although the song was written so long ago, it has recurring relevance at tragic times in Yoko’s life, and also in the state of the world. Her delicate singing abruptly morphed into screams of terror and convulsions, transforming into a song of redemption, ‘Calling’ from her latest album.

Yoko told us how the song ‘Mind Train’ originated. It was about 16 minutes long. John insisted on playing it for an unnamed famous musician, and Yoko expressed her regret of having this person endure the whole 16 minutes. However, I hope it was someone who was well deserving of the wrath of Yoko, and wish that it could have been myself instead. After all, one man’s pain is another’s pleasure! (I later realized that Yoko was referring to the time she and John played ‘Mind Train for Bob Dylan at the Isle of Wight in August 1969. Consider how preposterous and hilarious this is – that the prolific poet of rock n’ roll politely listened to something so lyrically abstract and lengthy!) A seemingly eternal ‘Mind Train’ ensued, taking us all aboard with another special guest, Antony Hegarty
crooning along.

Ono also performed the hopeful ‘Rising’, the incredible blues jam ‘It’s Been Very Hard’ and my favourite – ‘Why?’ – an intense rocker featuring a free form guitar/vocal duet between Sean and Yoko, that is eerily similar to the John & Yoko version. Sean’s array of guitar pedals was astounding, and he utilized every one of them, especially the fuzz box! His girlfriend Kemp Muhl played bass all night. Greg Saunier from Deerhoof was on drums just for this song.

Yoko wanted to perform ‘I Love You Earth’ (from Starpeace 1985) because ‘the earth is angry now and needs to hear it’. Yoko allowed Antony Hegarty (who praised the song’s lyrics as pure punk) to sing this one, but then the two of them got into an I-Love-You fest that just wouldn’t quit.

Everyone sang and spoke something heartfelt and respectful in dedication to the people of Japan. However, Lou Reed shuffled onstage, cranked up his guitar to eleven and blasted out ‘Leave Me Alone’ from Street Hassle!  He brought along an iPad with a scrolling teleprompter – which was hilarious and pretentious because all he sings is, ‘Leave me leave me leave me leave me leave me alone’!  (Yoko had sheets of musical notations too – when most of her songs are purely improvisational one-word mantras like ‘Why?’!)

Lou’s song was ear splitting. He worked Yoko’s band of young Japanese musicians (and Sean) to the bone – making them play louder and harder. It was as if he was telling Yoko, ‘Look! I’m even crazier than YOU are!’ She stood beside him, glancing at his teleprompter, chiming in with a few inaudible screams, but she politely surrendered as Lou hijacked her band! He mumbled something about how we all must be shocked, but to the contrary, it’s just what one would expect from Lou Reed. I am not saying that it wasn’t great. I just hate to admit it because Lou is so damned arrogant!

Sean stood between Lou and Yoko, watching in awe, as if he’d bought a ticket to the show himself and forgot that he was in it. He was amazed at organizing and pulling off yet another spontaneous, chaotic, and enthralling Plastic Ono Band event.

Sean introduced the final song as a great one written by Neil Diamond…it was his dad’s ‘Give Peace A Chance’.

As we exited the venue, we each received a cool gift from Yoko – a piece of sky (jigsaw puzzle piece) in a drawstring pouch with a card inscribed:

The sky is cracked now above Japan.

Let’s come together in our dreams

A dream you dream alone is only a dream

But a dream you dream together 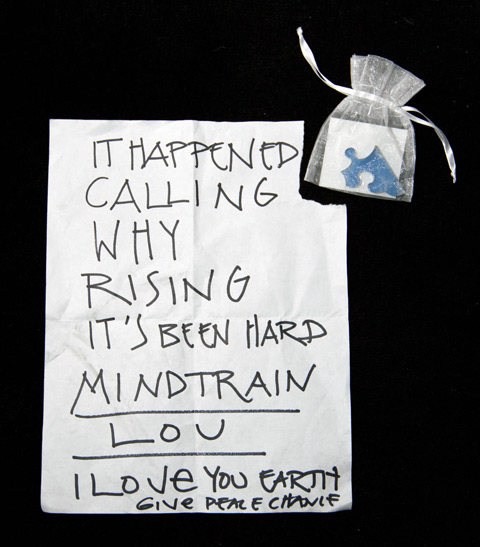 Yoko had re-written the verses to ‘Give Peace a Chance’ to reflect current events.

She jokingly sent me this email: