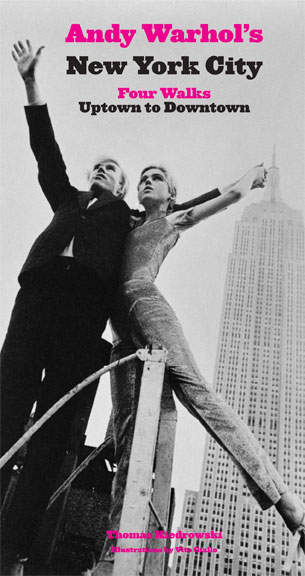 Andy Warhol made New York City his home. New York City made Andy Warhol a superstar. He embraced the entire metropolis; uptown to downtown, high life and low life. He mingled with the glitterati, and also befriended junkies, drag queens and street hustlers and brought them fame. In many ways, it feels like Andy is still here.

The author, Thomas Kiedrowski is the host of the Andy Warhol Sites Tour of New York City. His new book is a refreshing twist on the Warhol legacy – focusing on all the places and faces in Warhol’s life, from the time he took up residence here in 1949 as a commercial art illustrator on Madison Avenue until his death in 1987 as a pop/art icon.

A majestic photo of Andy Warhol and two of his ‘superstars’ appears on the cover; Edie Sedgwick, the star of Poor Little Rich Girl, and the Empire State Building, the star of Warhol’s 8-hour long film Empire, which inspired his infamous line, ‘Always leave them wanting less.’ The guide is divided into four sections for easy navigation; Upper Upper East Side, Upper East Side, Midtown and Downtown.

The book is a convenient size (resembling a Zagat guide) for walking in Warhol’s footsteps. It not only includes residences, but also theatres, museums, galleries, churches, antiques shops, hospitals and eateries that Andy frequented…and we can’t forget Hairpieces By Paul, the shop where Andy bought his infamous wigs! A useful star key code indicates whether a building still exists in its original form, is still standing but re-purposed, or sadly, has been razed. Architectural details of each building and the legacies of previous owners provide wonderful history lessons and lots of interesting trivia!

We learn many details about his legendary workspaces. The first was a sparse, run down firehouse. There are fabulous facts about the ‘Factory’ buildings. The iconic ‘Silver Factory’ on East 47th Street (occupied by Warhol from 1964-1967) was razed in 1969 to build 1 Dag Hammarskjold Plaza. At the Union Square ‘White Factory’ (1968-1973), Warhol began his foray into film, and took a bullet in the name of art. The MTV television show, Andy Warhol’s Fifteen Minutes was also shot there. Part of the final Factory (1984-1994) housed the offices of Warhol’s Interview magazine.

Another of Warhol’s favourite haunts, Bonwit Teller on Fifth Avenue was razed in 1980 to build Trump Tower. The guide also covers the abandoned project, the Andy-Mat – an international fast food chain of automats planned in 1977, which was inspired by another of Andy’s hangouts, Schrafft’s…but at the modern Andy-Mat, you could eat alone in a plush booth and watch television!

Besides vintage photos of the locations, Vito Giallo’s gorgeous original ‘blotted line’ trace drawings of several historical New York City buildings (made specially for this book) endow the guide with a certain authenticity. Giallo was once Warhol’s studio assistant – and later, his antiques dealer. He provided the same artistic technique for Andy.

One of the great secrets of New York City is that there are several aged, infamous 1960s Warholian superstars still out and about, who jump at the chance to share their legendary stories of ‘superstardom’ with us young acolytes, who listen wide-eyed and in awe. Most recently, Ultra Violet and Taylor Meade attended the dedication ceremony of The Andy Monument – a glistening silver statue in Union Square. Warhol joins fellow icons George Washington, Abraham Lincoln, Mahatma Gandhi and the Virgin Mary, who are all bronzed in New York City – dull memorials in comparison to Andy’s shimmering chrome effigy. This statue indicates that Andy Warhol Superstar still haunts New York City, and probably will be famous for at least fifteen more centuries!