Skip to content
By Madeline Bocaro ©
The most important guitar in the world resided (for a time) just one hour away from my home – in Connecticut. The one that played all my favourite songs – the one that reverberates through the decades, through the galaxies and beyond. Sonic sweetness, sorcery and simplicity emanated from its body and infamous face. Mick Ronson’s 1968 Les Paul Custom was in my own humble hands once again, and I could certainly feel his sweet vibes, his greatness and his gentle soul.
My friend Gilly (of Weird & Gilly)  from Cleveland was in town to work on a new chapter for the 2nd printing of their Mick Ronson biography, The Spider With the Platinum Hair. I had the pleasure of assisting with her research!
Ronson’s Les Paul was originally a Black Beauty. Ronno had the paint stripped  in  1970. A fellow musician suggested that the guitar’s high end might sound better if it could breathe, so off came the paint, and Mick had the only Les Paul around with its natural wood exposed. The wood grain eventually became the ‘fingerprints’ that helped identify and locate the guitar years later.
The public first heard it on ‘The Width of a Circle’ during Bowie’s February 1970 session on John Peel’s BBC radio show, and it rocked out The Man Who Sold the World album when Mick became Bowie’s permanent sidekick on the next four albums. Ronson’s guitar graced Hunky Dory, The Rise and Fall of Ziggy Stardust and the Spiders From Mars, Aladdin Sane and Pin Ups with power chords, pop perfection and eloquently streamlined solos.
Mick used this iconic guitar when he toured with Ian Hunter from 1975 through 1980s, and he would let me play it, and gave me short demonstrations! As I held Mick’s precious guitar once again, I could hear it singing the echoes of the past. All my favourite songs played through my mind; ‘Moonage Daydream’, ‘Queen Bitch’, ‘Ziggy Stardust’, ‘Suffragette City’, Lou Reed’s ‘Vicious’ from Transformer, and from Aladdin Sane ‘Watch That Man’, ‘Panic In Detroit’, ‘Time’, ‘Cracked Actor’, all the cover songs on Bowie’s Pin Ups album, masterpieces from Mick’s solo albums. ‘Slaughter on 10th Avenue’, ‘I’m The One/Pleasure Man’, ‘Play Don’t Worry’, ‘Angel No. 9’, Mott The Hoople’s ‘Saturday Gigs’, and ‘Lounge Lizzard’ from Ian Hunter’s 1975 solo album… This wonderful instrument created it all!!! I could picture Bowie kneeling down in front of Mick and playing it with his teeth… and Mick holding it out to hundreds of outstretched hands in the infamous photos of the Ziggy live gigs.
The Ziggy Stardust guitar was rescued from oblivion by one of Mick’s biggest fans, guitar dealer Rick Tedesco. He located it at the Hard Rock Café in Australia. Mick had donated it to the Hard Rock in the late 80s, signed, “I’m still rockin’ – Mick Ronson”. Rick made them an offer they couldn’t refuse, and he now owns and protects the treasured guitar at his home in Connecticut, after 2 years on loan at Cleveland’s Rock N’ Roll Hall of Fame. I love Rick’s story of finding the UPS package leaning against his house in the shape of a guitar, knowing of the treasure that was inside. Rick opened the package at his parents’ house, in the very room where he first saw Ronno live on TV as a teenager – a broadcast of the Ziggy’s 1973 Hammersmith farewell gig. He said it was a really emotional experience.

Thanks to Rick for the visitation rights, and for a lovely afternoon!
Update:
The guitar now resides in Monte Carlo. Rick, in a very tough and emotional decision, accepted an incredible offer that he couldn’t refuse. The new owner promises to exhibit Mick’s guitar in the future.
THE PHOTOS:
The albums are from Mick’s very own collection. It was very cool to see Mick’s very own copies of Slaughter and Aladdin…and also his Annette Peacock records!
THE AMP: (THE PIG!) – the Ziggy amp that Ronson plugged into on all Bowie records and the live gigs. It’s a Marshall Major 200 watt. He connected to an angled 4×12″ Marshall cabinet. He also used a Cry Baby pedal.
THE BLACK GUITAR: – The Les Paul before the paint was stripped.
THE BLUE TELECASTER: The guitar that Mick used primarily after he gave up the Les Paul in the late 80s.
THE AWARD: Mick received it posthumously in 2008 from Classic Rock magazine, UK.
by Madeline Bocaro – January, 2009 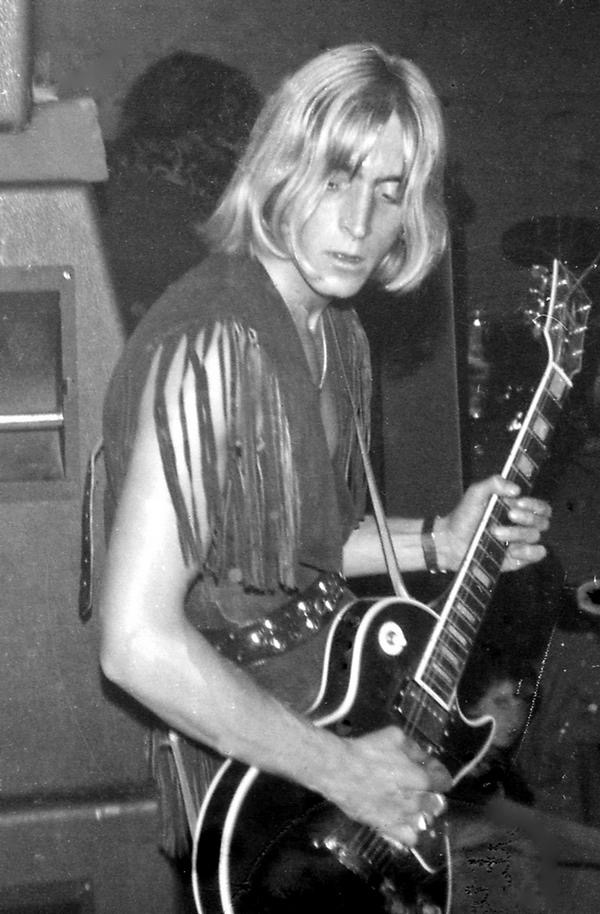