Read the reviews and order here:

The best gift of all on the Yoko Ono Plastic Ono Band reissue (2016) is the previously unreleased 7+ minutes long ‘Open Your Box’ (a wild version of the B-Side of John’s ‘Power to the People single, later known as ‘Hirake’ from her album Fly). Both songs were also released as a double A-side (see below) There is an astonishing section on the reissue where Yoko’s voice soars, miraculously multiplying to resemble a distressed flock of angry birds.

Whenever I listen to Yoko, no matter what song it is, I’m thinking, “This is my favorite song!” My friends always say, “Oh is that the one that goes “Akkkk akkkk akkk akkk?!” I honestly must say, “YES!!!” But this version of ‘Open Your Box’ is my all-time favorite!

In a censored single version, an added echo muffled the questionable lyrics. Yoko re-recorded the replacement lyrics in March at Abbey Road Studios. Trousers”, “skirt”, “legs”, and “thighs” were changed to “houses”, “church”, “lakes”, and “eyes”.

The song was completely censored in the USA, and a different Yoko song, ‘Touch Me’ appeared on the B-Side of ‘Power to the People’ instead.

‘Open Your Box’ appeared on Yoko’s 1971 album Fly under the title ‘Hirake’ (ひらけ) which means ‘opening’ in Japanese.

Yoko performed the song live on August 30, 1972 at the One to One concert in NYC. This is from the rehearsal:
https://www.youtube.com/watch?v=DJwuTuSGFp4

Possibly more than five rare copies of the single were made for Yoko’s approval on a white label with ‘Greenfield Morning’ on the B-Side – ‘Made specially for Yoko Ono’.

There is also a 2001 remix by Orange Factory. 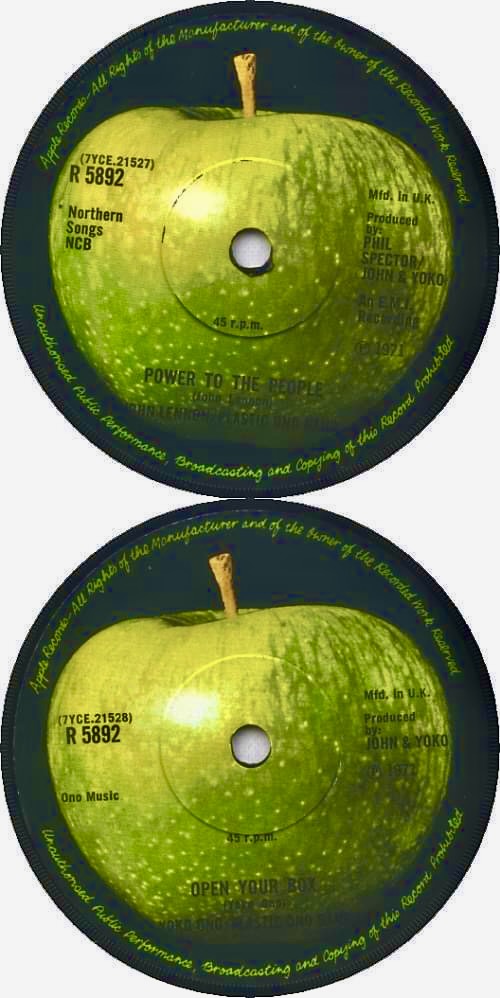